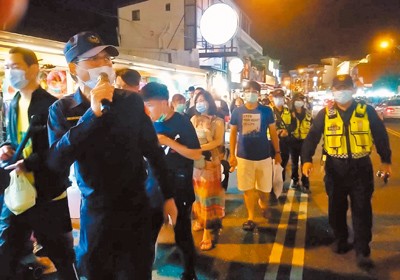 TAIPEI (Taiwan News) — Taiwanese doctors are warning of a spike in cases of Wuhan coronavirus (COVID-19) after the Central Epidemic Command Center (CECC) expressed alarm at the large crowds seen during the Qingming holiday.

Such was the concern over crowds breaking the CECC's prescribed social distancing measures that the center on Saturday (April 4) took the unprecedented measure of sending a nationwide text warning residents to avoid the Pingtung County beach resort town of Kenting, along with 10 other popular tourist spots. On Sunday, emergency room physician Pai Yung-chia (白永嘉) said on Facebook that before the four-day holiday had ended, many ERs across the island were seeing an influx of patients complaining of symptoms suspiciously similar to COVID-19, including fever, a cough, sore throat, and diarrhea.

Pai said that not only doctors and nurses but also radiologists, respiratory therapists, pharmacists, and even janitors and security guards have to wear extra personal protective equipment (PPE) to protect themselves against transmission from new suspected cases. He said that every patient suspected of having the disease is being tested and that all personnel who come in contact with them are donning PPE in case they test positive.

Pai cited one medical examiner as saying that if he is infected by a new patient, he is very afraid of passing on the disease to his children. Pai exhorted the public to take more precautions to avoid placing an unnecessary burden on health care providers and called on the government to provide more subsidies for medical staff and to strengthen manpower.

Meanwhile, Su I-feng (蘇一峰), a pulmonologist at the Yangming Branch of Taipei City Hospital, on his Facebook page on Monday (April 6) posted screen captures of the results of patients who had just tested positive for the disease in his hospital. In his post, Su lamented that Taiwan's medical care is so convenient and "super cheap" that even while the rest of the world is terrified of the Wuhan coronavirus, many Taiwanese "still travel and go abroad as usual."

He wrote that a visit to the ER in the U.S. costs NT$10,000 (US$330) and only NT$500 in Taiwan. He then posted screenshots of reports of four patients who had just been confirmed with the disease.

The first screenshot shows a confirmed male patient had just gone out to eat with friends before developing a runny nose, cough, and sore throat. Another patient had studied in the U.S. where they developed a cough.