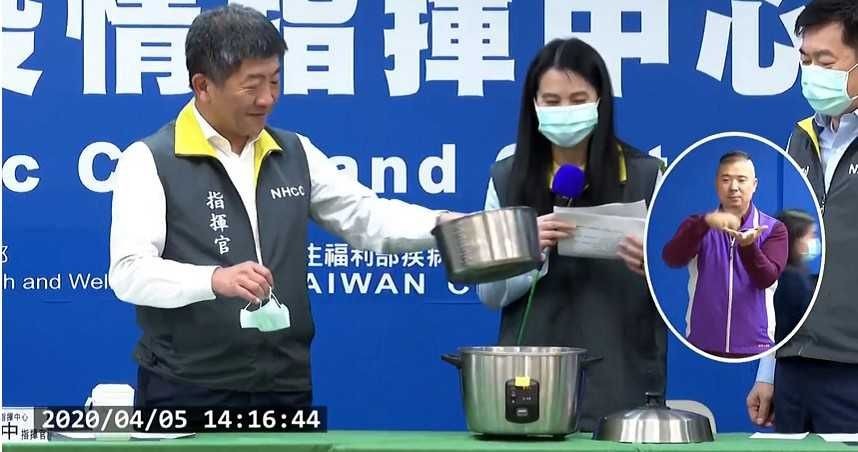 As surgical face masks are still in short supply despite a massive ramp-up in production, Health minister and CECC head Chen Shih-chung (陳時中) during a press conference on Sunday, demonstrated how to use a rice cooker to disinfect a mask for reuse. During a light-hearted presentation, Food and Drug Administration (FDA) Director-General Wu Shou-mei (吳秀梅) talked Chen through the simple steps of using a rice cooker to dry heat a mask to kill bacteria and viruses after use.

The room then erupts with laughter as Chen grins and shakes his head out of embarrassment. Wu then asks Chen to place the metal rack inside the cooker first, followed by the metal pot. She then asks Chen to place a mask inside the metal pot and cover it with the cooker's lid. Wu quips that users must remember to plug in the rice cooker, inducing more laughs from the audience.

Next, she asks Chen to press the "cook" button on the device. However, Chen struggles mightily to locate the proper button, before being guided by Wu to the correct lever.

A light switches on indicating that the device is starting to cook the contents inside. Wu explains that after three minutes, the button will pop back up, meaning that it has finished its cooking cycle. However, she advises users to allow the mask to continue to sit inside for another five minutes. She said that after that five-minute wait is over, the mask should be successfully disinfected.

Also in the video, she advises the public not to place water inside the cooker as would normally be the case when making rice and steaming foods as it will damage the mask. She reiterates that spraying disinfectant on the masks is a less desirable method than using a rice cooker because it could damage its electrostatic layer.

Wu states that a surgical face mask could be disinfected with the rice cooker method she demonstrated "four or five times." According to Wu, research on the procedure carried out by the FDA has found that the bacterial filtration efficiency (BFE) of the masks can be maintained at a level of 99 percent when dry heating the masks in this way, even after five times.