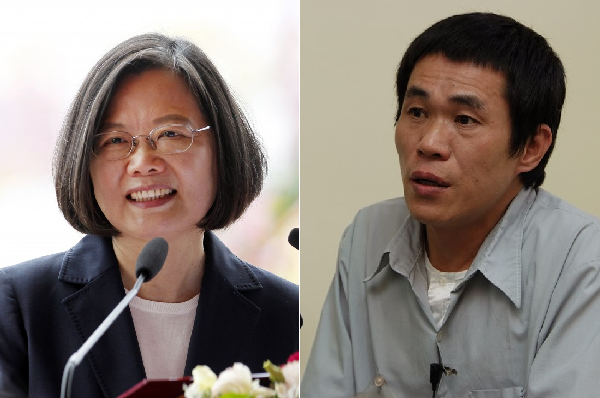 TAIPEI (Taiwan News) — One week after Taiwan saw its second execution during the tenure of President Tsai Ing-wen (蔡英文), a coalition of NGOs, lawyers, and academics sent her a petition for a presidential pardon for another inmate — Chiou Ho-shun (邱和順), who over three decades ago was sentenced to death on the basis of confessions extracted through torture during police interrogations.

Taiwan has won accolades from the international community in recent memory for being a democratic success story in the shadow of authoritarian China; for becoming the first country in Asia to legalize same-sex marriage; and at this moment, for the adeptness and openness with which it has tackled the coronavirus pandemic. Meanwhile, the island is making visible efforts to redress some of the darkest episodes of its past.

Soon after her inauguration in 2016, Tsai formally apologized for the historical mistreatment of Taiwan's indigenous peoples. Two years later, her administration established the Transitional Justice Commission to investigate and make public human rights violations during the White Terror martial law period, with an online database of victims being launched this year on the 73rd anniversary of the 2/28 Massacre.

The current administration prides itself on its transparency and sobriety in coming to terms with the skeletons in Taiwan's closet. One skeleton that has yet to fade away, though, is the case of Chiou Ho-shun (邱和順).

In 1988, police arrested a man in connection with the abduction and disappearance of nine-year-old Lu Cheng (陸正). The suspect then named Chiou and 11 others, all of whom initially proclaimed their innocence. But within days, all 12 had admitted not only to murdering the boy in a botched ransom but also to a previously unsolved murder and dismemberment of a woman.

The police continued their interrogations of the suspects until they had secured no less than 288 confessions, which were submitted to the court as evidence, ultimately forming the basis for Chiou's death sentence in 1989.

Thomas Wang is a U.S.-trained criminal defense attorney who represented Chiou at the Asian Human Rights Court Simulation (AHRCS), hosted by Taipei last summer, which saw the participation of judges, lawyers, and other legal experts from Hong Kong, Japan, Taiwan, and Southeast Asia. In an interview with Taiwan News, Wang laid out the irregularities of the investigation:

"It is very unusual for law enforcement to try to get 288 different confessions... Think about it. If you have a confession, why do you want him to keep repeating it? The confessions were inconsistent... So over the course of this case, you can tell that as the prosecution finds a detail in the confession that they cannot corroborate, they go back and question until the defendants agree to a different version. Then the story repeats itself."

A story the judicial system would sooner forget

Chiou later recanted his confessions, which he and his co-defendants said were extracted after numerous, prolonged periods of torture while being held incommunicado.

The abuses were confirmed in the 1994 conviction of two officers involved in the torture sessions. To this day, there exists no physical evidence connecting the accused with the murders.

"When I first took on this [AHRCS] case, a lot of the older generation asked me: "Why do you think he's innocent?" Wang said. "To that, I point to Taiwan's own internal investigation: "We're talking drownings, beatings, electrocuting one's genitalia, isolated detention...The officers in charge of these were, in fact, convicted. It doesn't take a trained lawyer to see that the case doesn't hold up," he quipped.

Nevertheless, the majority of the confessions — the ones that came from interrogations without recorded evidence of physical abuse — continued to be considered in court, even as Taiwan moved beyond its martial law period, carrying out ever fewer death sentences in the early 2000s.

And in each of Chiou's appeals, from his first to his 12th and final in 2011, the Supreme Court upheld the death sentence.

"We are litigating old evidence over and over again," said Wang. "I do not honestly believe that anyone on that bench believes the confessions should hold up." He stressed that while he understands judges' reluctance to admit that their colleagues had been wrong all these years, Chiou's sentence boils down to choosing to save face over saving a life:

"We all have our own internal biases, and in this case, to me, the biases got the better of good judgment: inconsistencies, torture, and just fundamentally flawed police investigation," he lamented.

"You talk about the triple crown: You have a bad investigation, you have law enforcement under pressure, then you have internal biases that were built up over time. And at this point, how do you overturn a conviction so old and call out the deficiencies of the system?"

Wang's frustration on the lack of progress on the case is shared by Lin Hsin-yi, executive director of the Taiwan Alliance to End the Death Penalty, whose members also signed the petition for a pardon. "[It's] very difficult for the judicial system to say 'I'm wrong,' she said in an interview, adding she has heard that no judges are now willing to "deal with it."

For its part, the AHRCS in its mock ruling stated "[Chiou] has been and remains a victim of the violation of his ICCPR rights," determining that Taiwan violated Articles 7 and 14, which deal with coerced confessions, solitary confinement, and other abuses. Taiwan ratified the ICCPR (International Covenant on Civil and Political Rights) in 2009.


Capital punishment: More complicated than for or against

Public support for the death penalty has fluctuated in Taiwan since it began its transition into a mature democracy, and this is reflected by the government's inconsistent stance on the issue.

There was a de facto moratorium on executions from 2006 until 2010, the year the Ministry of Justice (MOJ) set up the Task Force to Research the Gradual Abolition of the Death Penalty, bringing together Taiwanese experts and civil society groups with the stated goal of pursuing "death penalty abolition in line with the international trend of death penalty abolition..."

Lin's TAEDP was one of the most visible members of this task force. She told Taiwan News that while politicians are often quick to cite surveys showing a majority of Taiwanese support capital punishment, the reality is more nuanced.

She pointed to a 2013 study of 2,039 Taiwanese conducted by a team from Academia Sinica's Institute of Sociology. Although 85 percent of participants voiced support for the death penalty in cases where murder had taken place, that support weakened when extenuating circumstances were at play.

For example, in one hypothetical scenario in which a young girl was stabbed to death, 83 percent of respondents said the murderer should be executed, 11 percent supported a life sentence, and 3 percent opted for "long-term imprisonment," with another 3 percent choosing "other/don't know." Of those who did not back the death penalty, 42 percent said the offender ought to be "given a chance to repent."

Interestingly, however, if the killer was found to be suffering from a mental disorder, support for the death penalty dropped to just 34 percent, with a life sentence or lengthy sentence suddenly being favored by 44 percent and 18 percent, respectively. In addition, after the TAEDP held a series of over 30 meetings around Taiwan in which members invited everyday citizens to exchange views on the topic, most people decided that either life imprisonment or a lesser sentence, perhaps coupled with labor, with the salary going to victims' families, to be punishment enough, Lin said.

"I feel people change their minds, maybe slowly, but if we only [read the news], we will feel 'Okay, nothing changes.' From my view, I can see the change," she insisted.

A democratic government's authority to kill is derived from its citizens' confidence that it can hand down the sentence impartially and free of error, a level of trust Wang believes the average Taiwanese does not have: "[Taiwanese] worry a lot whether we are making the right decision, which is ironic if we do not afford the same amount of scrutiny to taking life." This sentiment echoes the Academia Sinica study, in which more than half "had no confidence in the fairness of death penalty sentences."

Following the execution of Weng Jen-hsien (翁仁賢), the TAEDP announced it was withdrawing from the task force after years of foot-dragging on the issue it was created to address.

Frustrated, Lin called into question the ruling Democratic Progressive Party's (DPP) resolve, saying that as each time an execution happens, the discussion stops, and taking a tough-on-crime tack has not appeared to serve the party particularly well either. Indeed, the first execution on President Tsai's watch, scheduled in the lead-up to the 2018 local elections, failed to save her party from a crushing defeat.

The push for a presidential pardon comes at a time when Taiwan is positioning itself as a progressive, democratic foil to China's brand of authoritarianism, and its successes in the coronavirus pandemic have allowed it to flex its soft power on an unprecedented scale.

Even as Taiwan delivers 10 million surgical masks to virus-stricken Europe, though, this month's execution did not go unnoticed by the European Union, whose members are among the 106 states worldwide to have officially abolished the death penalty.

The EU's European External Action Service expressed its disappointment, asking Taiwan to "refrain from any future executions, to reinstate and maintain a de facto moratorium, and to pursue a consistent policy towards the abolition of the death penalty." Such an approach would draw even further contrast with China, which is believed to execute more people than the rest of the world combined.

Meanwhile, time is running out for Chiou Ho-shun.

In Taiwan, death row inmates are given only 30 minute's notice before they are taken away to be shot, and after over three decades languishing in a cramped cell, the 62-year-old's health is deteriorating. In addition, his mother passed away a couple of years ago, and his daughter is reportedly no longer in his life.

A presidential pardon is his last hope. "Of course, right now the judicial system does not want to admit they made a mistake," said Lin. "I don't know if he can still rightly see his innocence come."

The Presidential Office has confirmed it received the petition but has not responded to further requests for comment.