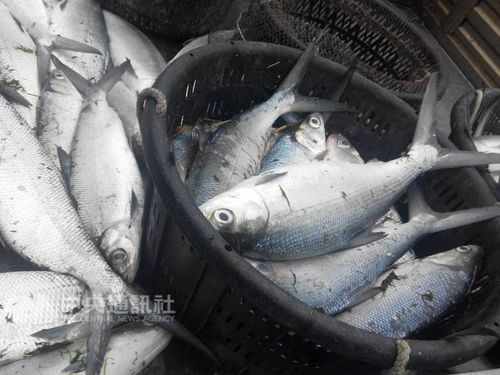 Nearly a metric ton of floating dead fish have been scooped up from Tainan's old transport canal, their deaths likely caused by a lack of oxygen in the water, the city's Environmental Protection Bureau said Friday.

The fish, varying from milkfish to mullet, were found in the canal, which separates Anping District from downtown Tainan, in the section between Xinlin'an Bridge and Yunghua Bridge.

The carcasses, many of which were about the size of a human palm, have been removed from the waterway since the incident was first reported on Wednesday, the bureau said.

According to the agency, an initial investigation suggested that the fish most likely died from suffocation, as indicated by their gaping mouths.

After days of heavy downpours recently, sediment and domestic sewage may have washed into the canal from rising water levels in drainage channels, leading to a sharp drop in dissolved-oxygen concentration and the die-off, environmental officials said.

The location where the fish were found was also consistent with that theory, the officials said.

The canal has two high and low tides every day, they said, and during high tide, the section between the bridges is the most stagnant and tends to trap the most harmful substances, such as sewage and pollutants.

Despite having a theory on what happened, the bureau is still investigating the incident to determine if a chemical spill may have also played a role in the mass deaths of the fish. (By Chang Jung-hsiang and Ko Lin)