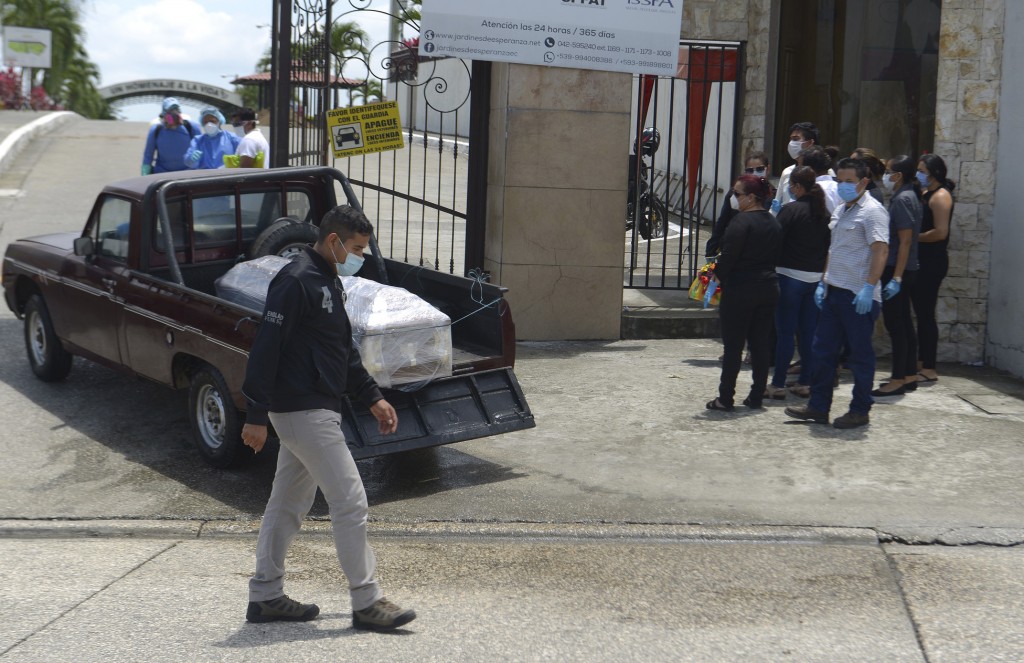 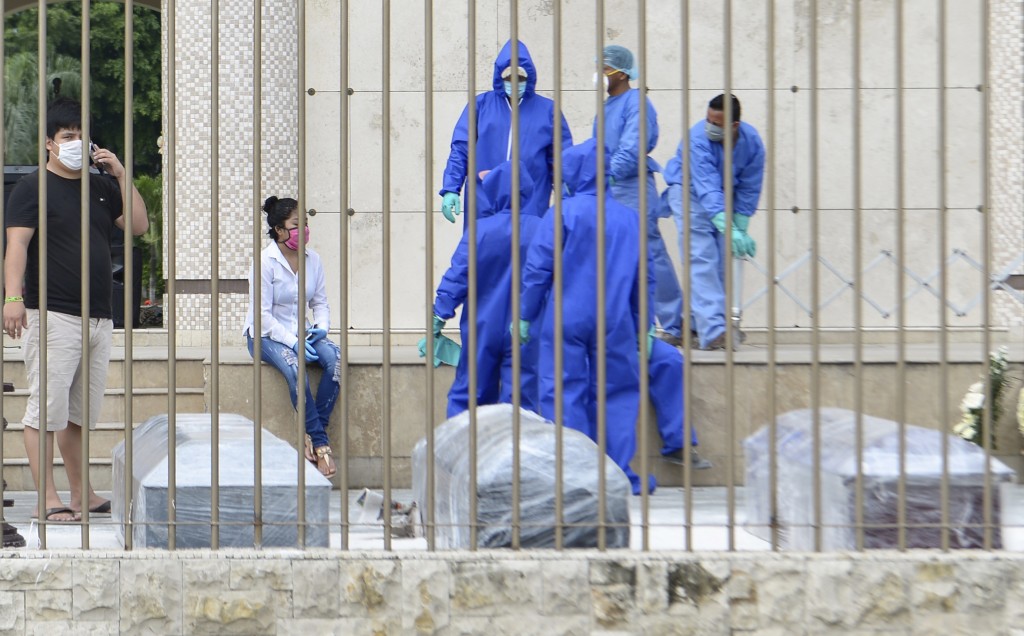 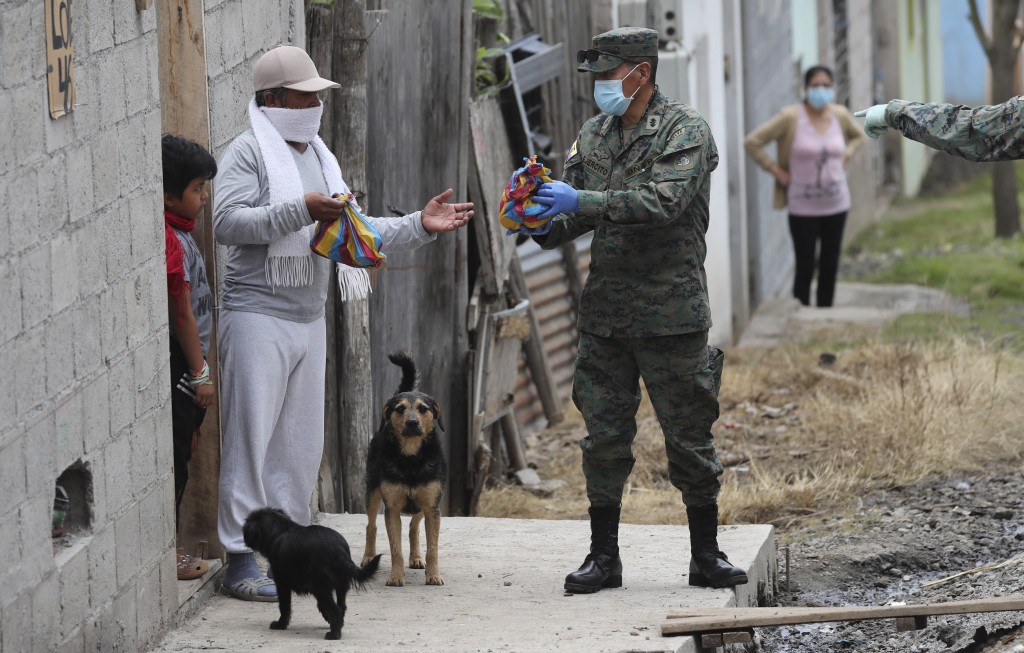 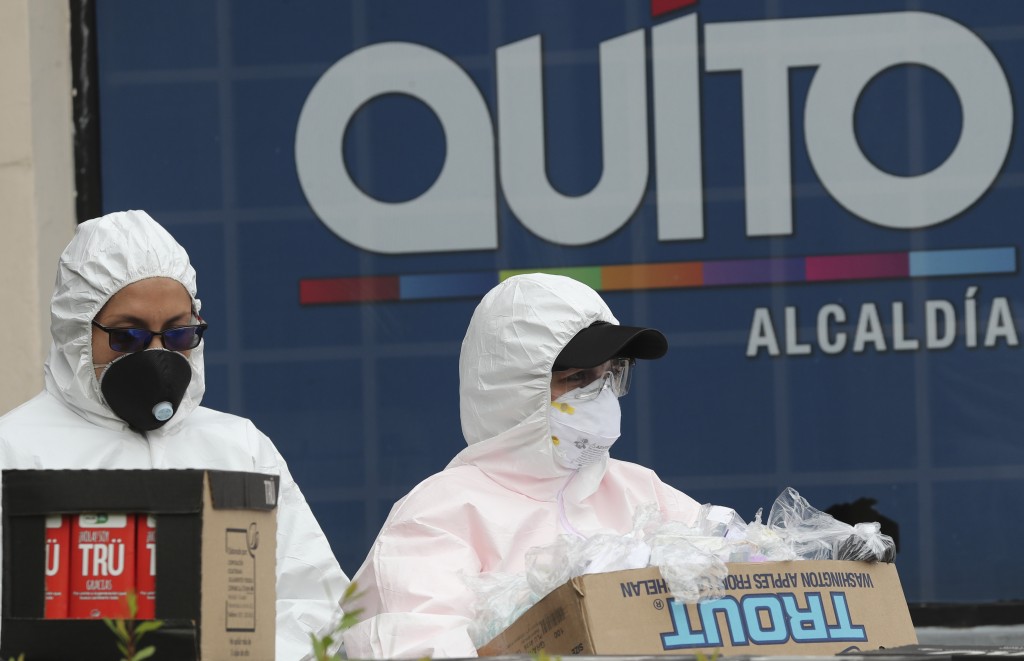 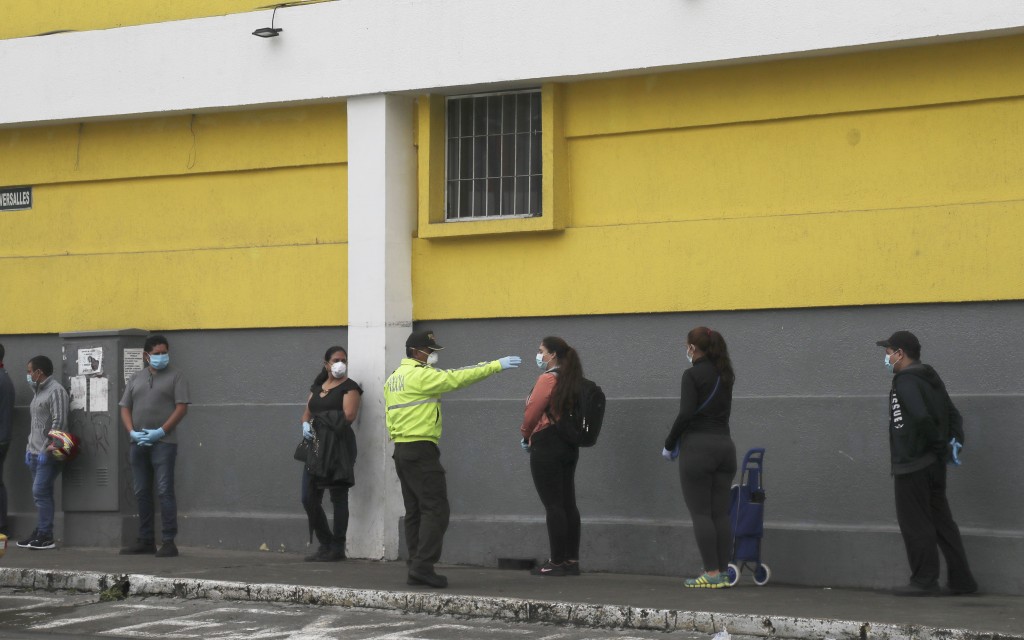 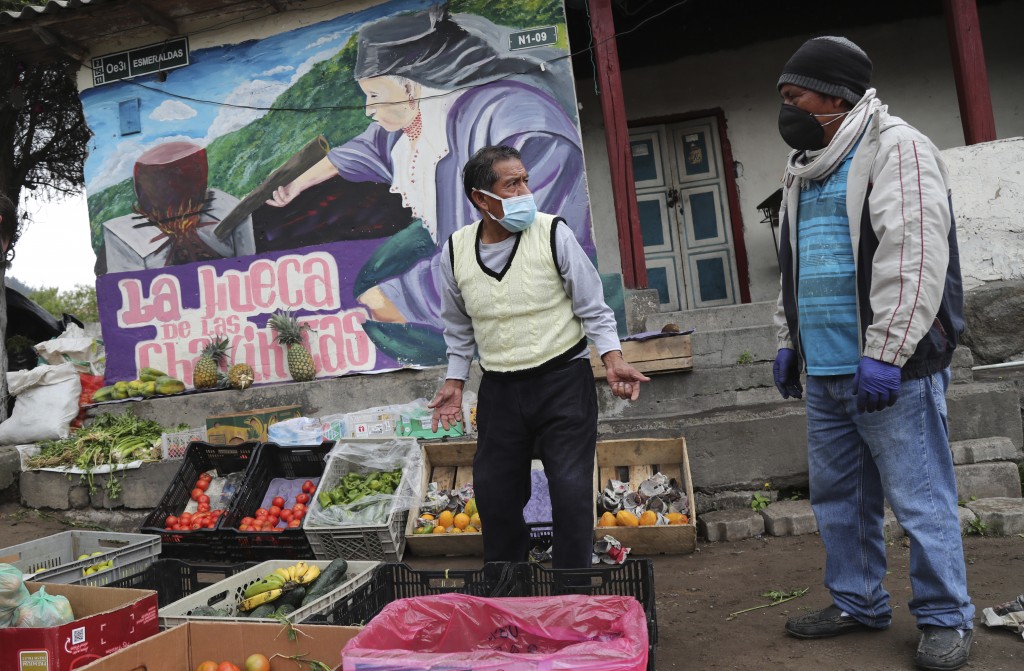 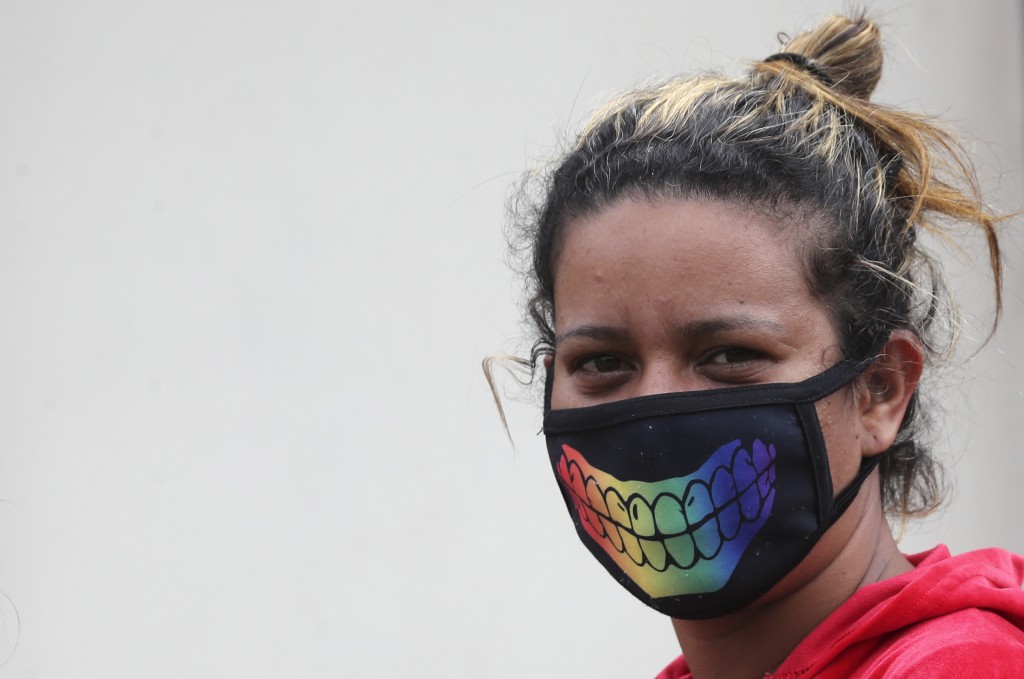 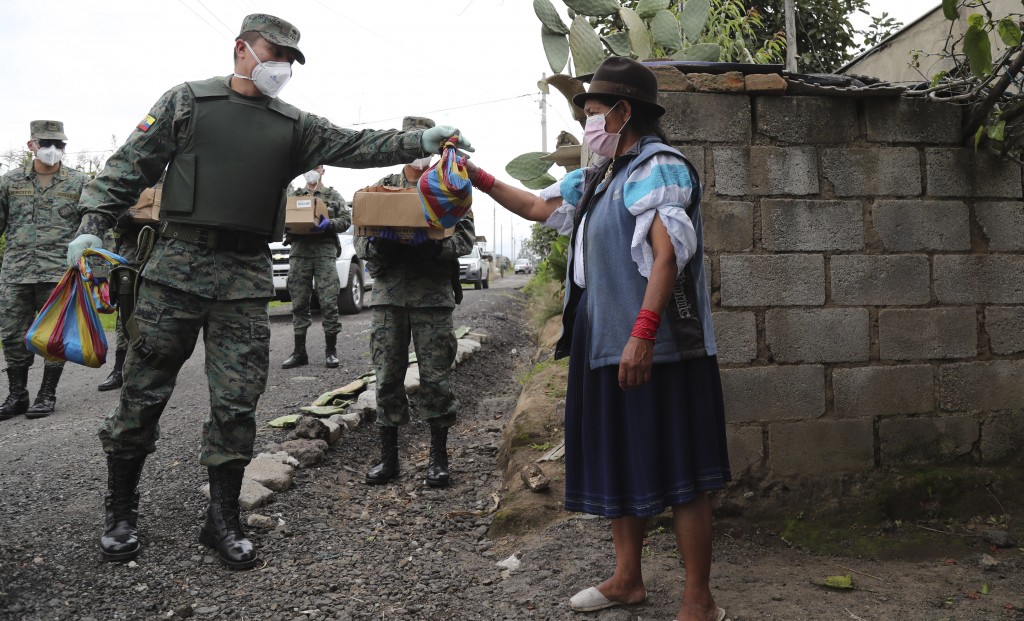 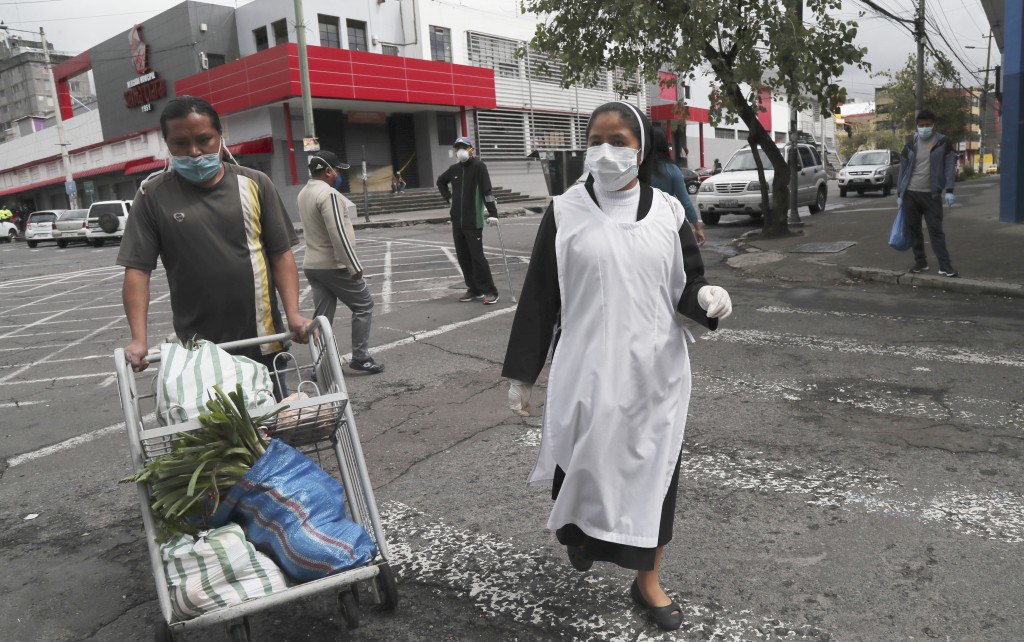 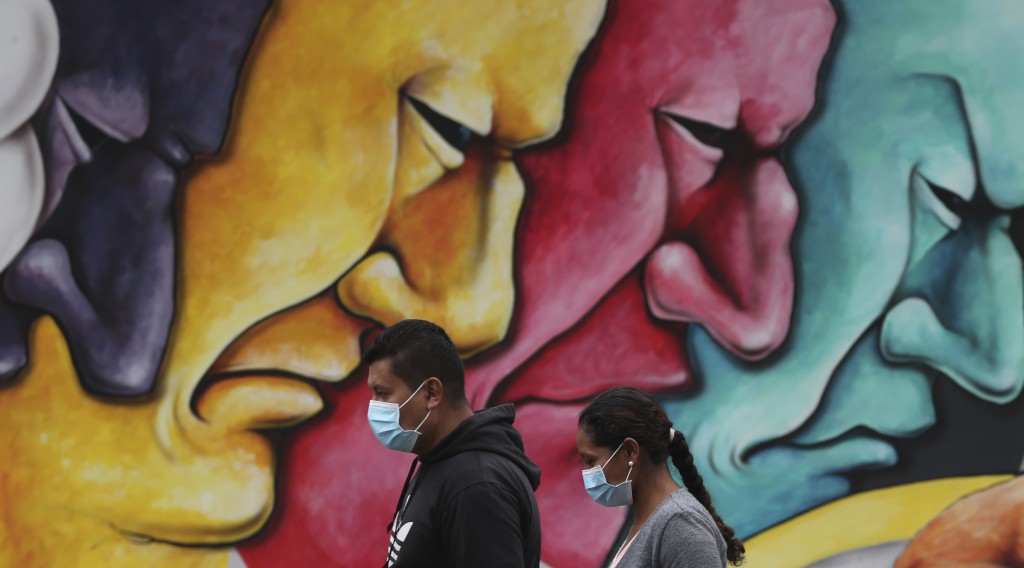 QUITO, Ecuador (AP) — Daniel Larrea died Monday after a week of high fever, struggling to breathe and steadily turning blue. Then a new nightmare began for his family. No one in their city on Ecuador's Pacific coast would pick up his body.

“We wrapped him up in black plastic,” Larrea's wife, Karina, said Wednesday. “He’s here in the living room.”

Hospitals are turning away patients and bodies are being left on streets and in homes for days in Guayaquil, a normally bustling metropolis of 2.6 million that has become a hot spot in Latin America as the coronavirus pandemic spreads.

The small South American nation has recorded 120 coronavirus deaths, but officials say there could be dozens more who died without ever being officially diagnosed — people like Larrea, who had all the symptoms, but never got tested. Nationwide, there were 3,160 cases confirmed on Thursday, likely a vast underestimate.

Meanwhile, untold numbers of Ecuadorians are dying of unrelated diseases that can’t be treated because hospitals are overwhelmed.

It's not just medical services at a breaking point. Morgues, funeral homes and all related services for the dead are over capacity.

In recent days, macabre images and pleas from families have begun appearing on social media showing dead loved ones wrapped in plastic or cloth, waiting for them to be taken away. Television crews have captured images of bodies and coffins left on sidewalks.

“It’s a desperate smell,” said Merwin Teran, 61, the owner of a Guayaquil funeral home, who said he saw 50 dead in one morgue alone.

Doctors say there aren't enough tests in the country, making it harder to identify and isolate the sick to try to stop the spread of COVID-19, the disease the virus causes — as well as too few hospital beds and ventilators.

“We are seeing a situation quite similar to that of Italy,” said Dr. Mireya Rodas, a lung specialist at a Guayaquil hospital who has herself tested positive.

Ecuador identified its first case of COVID-19 on Feb. 29 — a 71-year-old woman who had traveled from Spain — making it one of the first Latin American countries to confirm the arrival of the disease.

Medical experts fear the disaster brewing in Guayaquil may offer a frightening glimpse of what awaits the region in the coming weeks and months.

“More contagion, more mortality,” said Enrique Acosta, a researcher at the Max Planck Institute for Demographic research in Germany. “They are closely intertwined.”

Acosta is among a group of policy experts urging Latin American governments to quickly ramp up testing. They note that in countries like Singapore and South Korea, where the virus has been more quickly contained, testing was widespread. But that is not the case in Latin America and the Caribbean.

Medical professionals believe the true number of coronavirus cases in Ecuador could be five times the official count or higher.

Teran, the funeral home owner, said he went to a cemetery on Tuesday where workers usually inter about 30 people a day, but 149 bodies were awaiting burial or cremation.

He said many funeral homes are not operating, while those that are have to send workers to pick up bodies without adequate protection. By law, he said, funeral homes can’t pick up bodies until a doctor has signed off on a cause of death, but because so many physicians are treating patients, bodies are accumulating in morgues, creating a backlog.

Not all of the dead are dying from the coronavirus — which for most people, causes only mild to moderate symptoms, like a fever and cough, but for others, particularly older adults and those with other health problems, can lead to pneumonia and death.

Carmen Suarez, 71, died at her home over the weekend in Guayaquil from what the family believes was kidney failure. Relatives tried to find a hospital that would accept her as her legs grew increasingly swollen, but were told no beds were available and that taking her to a hospital would be risky anyway because of the coronavirus spread.

By Tuesday, the family had spent three days waiting for her body to be taken away. They eventually called a funeral home worker who brought a coffin and embalmed her body, which was still waiting on the family’s patio for burial.

“It’s catastrophic what is happening in Guayaquil,” said Byron Moreira, 36, her son-in-law. “I wouldn’t wish this on my worst enemy.”

Esteban Ortiz, a public health specialist, said that in the province of Guayas, which includes Guayaquil and where 70% of the country's virus cases are located, only around 175 ventilators are likely available. On Thursday, 225 people were hospitalized, including 122 in serious condition nationwide, indicating a likely critical shortage of the live-saving equipment.

“We’re not giving them a chance to come and get medical attention,” he said.

The Ministry of Public Health did not respond to requests for comment. But at a news conference Wednesday, health authorities defended Ecuador's response, saying that new technology would soon allow testing to increase to 1,400 a day.

Jorge Wated, the official tasked by the government with handling the death toll crisis, said authorities were preparing for many more fatalities and working to ensure all are buried appropriately. He said authorities usually pick up about 30 people who have died in their homes each day, but have been picking up around 150, not all of whom died of COVID-19.

“We ask for forgiveness for those who had to wait days for their loved ones to be picked up,” he said.

Gina Watson, representative for the Pan American Health Organization in Ecuador, said experts expect to see a similar uptick in cases elsewhere in the region.

“Guayaquil is experiencing what we expect to see in all countries,” she said. “A rising curve of cases along with the associated mortality.”

Until he came down with a 102-degree fever a week ago, Larrea had no known health problems other than being overweight, his family said.

The family called doctors, who advised him to stay home and take an over-the-counter fever reducer.

As he grew worse — struggling to breath and changing color — the family called for an ambulance, only to be told none were available to go to their poor neighborhood.

The family was dependent on the 42-year-old Uber driver and father of four for their economic livelihood and together with other relatives — eight people in total — live in a small home.

After he died, they wrapped the body in thick black plastic, called 911 and waited.

Aside from the emotional toll of seeing their loved one die, the family now fears that they have all been exposed to coronavirus.