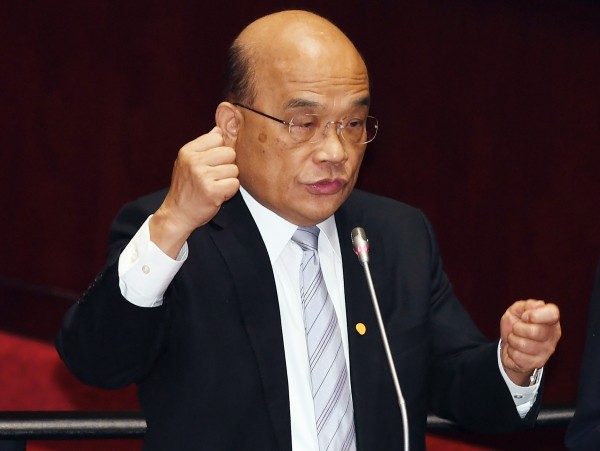 TAIPEI (Taiwan News) — When asked for his take on communist China's insistence on not using the place name "Wuhan" when describing the COVID-19 pandemic, Premier Su Tseng-chang (蘇貞昌) said the correct name is "Wuhan pneumonia" (武漢肺炎) since that was its factual origin.

During an interpellation session of the Legislative Yuan on Tuesday (March 31), Democratic Progressive Party (DPP) Legislator Tsai Yi-yu (蔡易餘) sought Su's opinion on communist China's policy of not allowing "Wuhan" to be used in descriptions of COVID-10 and other attempts to salvage its image amidst the global catastrophe. Su responded by saying the coronavirus outbreak started in Wuhan, China, and therefore it should be called "Wuhan pneumonia," and that demanding the world to change the name shows that China lacks confidence in itself, reported Liberty Times.

Tsai said that China is seeking to whitewash its gross mismanagement of the coronavirus epidemic by claiming that terms such as "Wuhan coronavirus" and "Wuhan virus" are racist, while having World Health Organization (WHO) Director-General Tedros Adhanom praise China's every move. Tsai pointed out that Tedros even lauded the communist country as having "bought the world time."

Su agreed with Tsai's assessment and said that it was a fact that the disease started in Wuhan, so the world has given it the name Wuhan pneumonia. He noted that many major infectious diseases take their names from their place of origin, such as German measles, Japanese encephalitis, and Hong Kong foot (Taiwanese Mandarin term for athlete's foot), but because China does not have any confidence in itself, it behaves in this way.

He then observed that China is now launching a media blitz to draw praise for the supposed containment of the outbreak within its borders. However, he said that such media manipulation could backfire if overdone.

Su said that Taiwan long ago learned not to trust China. Therefore, it was extremely cautious when the outbreak began because "we early on knew to be afraid."