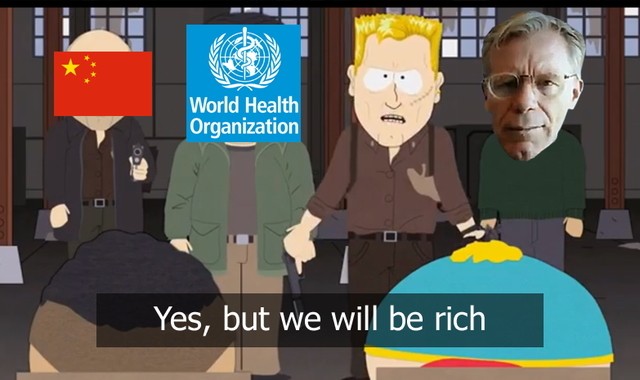 TAIPEI (Taiwan News) — A French YouTuber on Saturday (March 28) created a meme based on a "South Park" episode after seeing World Health Organization (WHO) Assistant Director-General Bruce Aylward humiliate himself by repeatedly dodging questions about Taiwan's inclusion in the organization.

The artist, who lives in France and goes by the handle "Ilan A.", told Taiwan News that he was inspired to create the meme immediately after seeing Aylward's disastrous interview with Radio Television Hong Kong (RTHK). He described the interview as "a really shocking thing to watch."

Ilan said he felt the bizarre encounter reminded him of a scene from the "South Park" episode "The Snuke." He lamented that, "The WHO is literally putting the CCP's money before millions of human lives, and now the entire world has to suffer because of that."

During the awkward video interview with RTHK journalist Yvonne Tong (唐若韞) on Saturday, Aylward responded to a question about Taiwan's inclusion in the WHO with deafening silence, before asking her to move on to the next question. When Tong continued trying to elicit a response, a panicked Aylward appeared to abruptly hang up on her.

After Tong called Aylward again, he again dodged the question by saying he had "already talked about China" and that all areas of the country had done "quite a good job" in battling Wuhan coronavirus (COVID-19). He then ended the conversation before Tong could ask any other questions.

"These WHO/UN people — same with World Bank and IMF — are paid SO MUCH MONEY, tax free. It's not about promoting human rights and well-being, but about careerism."

"This guy deserves a Anti Nobel Peace Prize if there really exists such thing..."

"Should've pasted WHO Director-General Tedros' head onto one of the WHO guys as well."

"They're refusing to even acknowledge the existence of an entire country where the virus can spread just to get some Chinese money."