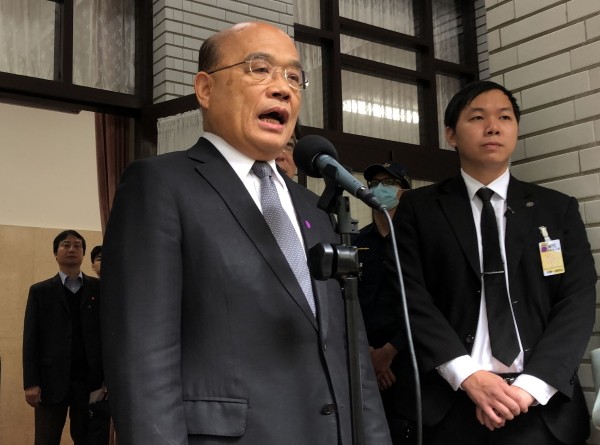 TAIPEI (Taiwan News) — Premier Su Tseng-chang (蘇貞昌) on Tuesday (March 31) said that Kuomintang (KMT) legislator Chen Yu-jen (陳玉珍) is not fit to serve in the Legislative Yuan after she declared that "Taiwan is not a country."

When asked by reporters to respond to the comment in front of Legislative Yuan on Tuesday, Su replied, "Then she is not qualified to be a member of the Legislative Yuan," reported Liberty Times. Su stressed that under the leadership of President Tsai Ing-wen (蔡英文), his responsibility is taking good care of 23 million citizens to the benefit of the nation, just as he did last year to prevent African swine fever (ASF) from invading Taiwan.

Su said that "The Taiwanese people's hard work battling the Wuhan coronavirus (COVID-19) has increased its recognition across the globe, which is important." Su said that Taiwan has a place in the world that is different from China's.

"The world is becoming more and more sure that Taiwan can have a seat in the world," said Su. As for whether a change to the Constitution would be required to change the name on the passport, Su said that this should be decided based on a consensus among the country's people and government.

When asked to comment on Chen's statement, Mainland Affairs Council (MAC) Minister Chen Ming-tong (陳明通) told reporters on Tuesday, "I think the legislator's views are not those of mainstream society," reported CNA.