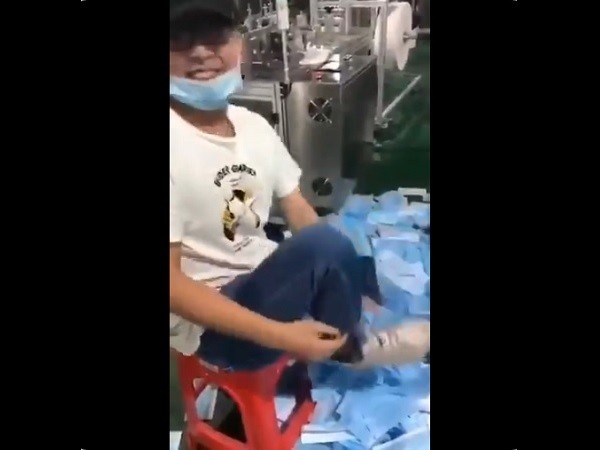 While China continues its propaganda campaign to paint itself as the savior of the world during the pandemic, a number of reports have surfaced alleging that the test kits, face masks, and other medical supplies it is donating and selling to countries in need are defective. At the same time, the Chinese Communist Party (CCP) is seeking to shift blame for its bungled handling of the disaster by fostering conspiracy theories such as the U.S. military being behind the outbreak, leading to a spike anti-foreigner sentiment in China.

In the latest incident, a video posted on Twitter appears to show a Chinese factory worker soiling face masks meant for foreign clients. The man, who is not properly wearing his own mask, can be seen laughing with glee as he grabs surgical masks by the handful and rubs them on his shoes.

The video was uploaded at 10:14 a.m. Monday morning by a Chinese coronavirus vlogger from Wuhan who goes by the pseudonym Harry Chen PhD. Before being suspended by Twitter in late February, Chen's Twitter account had gained 35,000 followers for his frequent insider videos of the outbreak in Wuhan and CCP abuses.

Chen later created a new account through which he has defiantly continued to post videos his trusted sources in China sent him through encrypted channels. Chen told Taiwan News that the video had been filmed on Monday by workers in a factory converted to produce surgical face masks.

Chen said that the factory workers first posted it on Douyin, the Chinese version of TikTok and that the factory is located in the Jiangsu province city of Zhenjiang. In the video, the worker can be heard asking the cameraman in a thick Zhenjiang accent "Is this good enough? Are these the masks for export?"

The vlogger then questioned if it is wise for the West to trust China to do all of its manufacturing. Chen said the original video was wiped from Douyin's servers by government minders within minutes after being uploaded.

Chinese factory worker runs his shoes on the masks asking the camera man if this is good enough. Are these the masks for export??? Can we trust China to do the west's manufacturing? pic.twitter.com/ZFZHILZacj