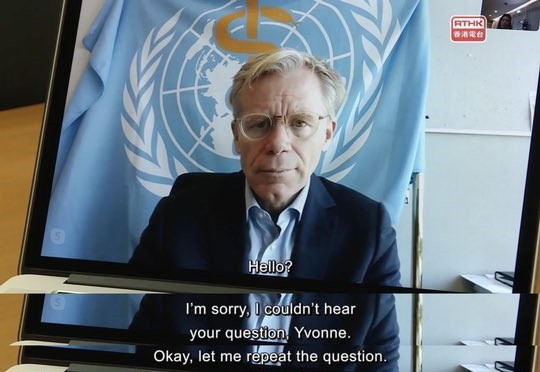 TAIPEI (Taiwan News) — Bruce Aylward, assistant director-general of the World Health Organization (WHO), has disappeared among the list of leaders on the organization's website a day after awkwardly refusing to answer a question about Taiwan's exclusion from the UN agency.

During a video interview with Radio Television Hong Kong journalist Yvonne Tong (唐若韞) on Saturday (March 28), Aylward claimed not to have heard her question about whether the WHO would consider Taiwan’s membership. When the journalist tried to repeat the question, the WHO official asked her to "move on to another one."

After Tong insisted on getting Aylward’s comment on the Taiwan issue, the advisor appears to have ended the call without notice. After the abrupt end to the interview, the journalist made a follow-up call to inquire about his opinion on Taiwan’s strategy to contain the coronavirus (COVID-19) pandemic, which originated in the Chinese city of Wuhan and later spread to the rest of the world.

The official then dodged the question by saying that "all the different areas of China" have "done quite a good job" in terms of combatting the virus. Aylward's awkward dodging of the question sparked a huge backlash online, with many expressing disgust over the Canadian physician's apparent fear of offending China, which claims representation of Taiwan.

Jonah Goldberg, editor-in-chief of The Dispatch, described Aylward's behavior as "carrying a lot of water for Beijing." American scholar Bonnie Glaser, a senior adviser for Asia and the director of the China Power Project at the Washington-based Center for Strategic and International Studies, described Aylward's actions as "despicable."

WHO really carrying a lot of water for Beijing these days. https://t.co/ok49NjERDV

Dr Bruce Aylward of #WHO refuses to answer a question about Taiwan and rudely cuts off the interview. This is despicable. Watch the clip. https://t.co/CRUOW6p6tm

That same day, PJ Media reported that Aylward's bio and listing as sssistant director-general had vanished from the WHO website. A Google cached view of his bio dated 10:14 GMT March 28 still shows Aylward's photo and description.

Internet archives of Aylward's page can be seen as recently as March 16 on web.archive.org. However, a web archive view of the page on March 29 redirects to the WHO Headquarters Leadership Team. This means that Aylward's page was taken down from the website at some point on March 28 or March 29, shortly after the embarrassing interview had aired. Thus far, there has been no public statement by the WHO explaining the sudden disappearance of the page.

On Sunday, the WHO issued a rare statement in which it said "The question of Taiwanese membership in WHO is up to WHO Member States, not WHO staff." The organization went on to say that the "WHO is working closely with all health authorities who are facing the current coronavirus pandemic, including Taiwanese health experts."

After a brief tour of some areas affected by the Wuhan coronavirus in February, Aylward lavished praise on China for its handling of the outbreak, glazing over the initial slow response by government officials that arguably enabled the disease to spread across the world in the first place. Once he returned to WHO headquarters in Geneva, Switzerland, Aylward expressed confidence in the communist regime's health care system, proclaiming: "You know, if I had COVID-19, I'd want to be treated in China."

The WHO has continually been criticized recently for being quick to praise China but slow to warn the world about the dangers of the coronavirus pandemic. A petition calling for the resignation of WHO Director-General Tedros Adhanom Ghebreyesus and advocating Taiwan’s participation in the agency has garnered over 665,000 signatures since it was introduced on Change.org in early February.