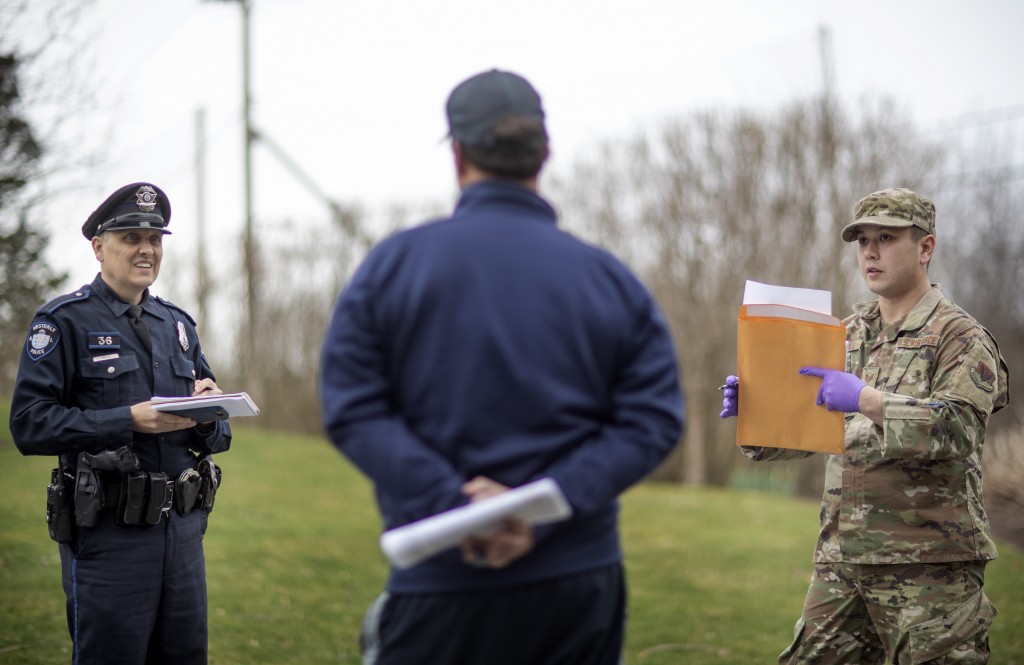 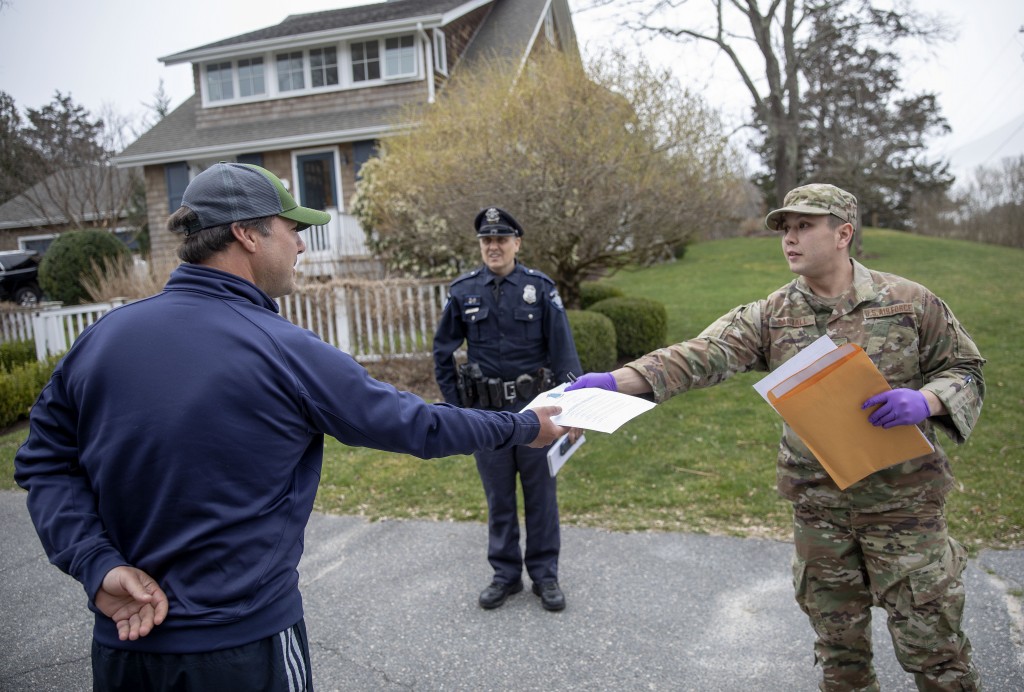 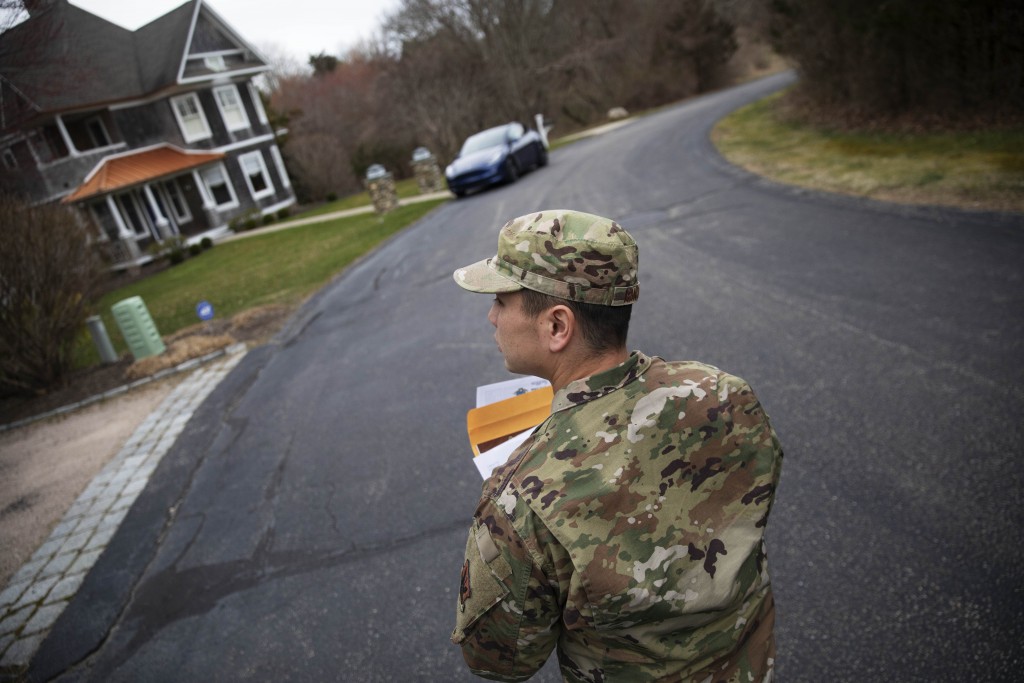 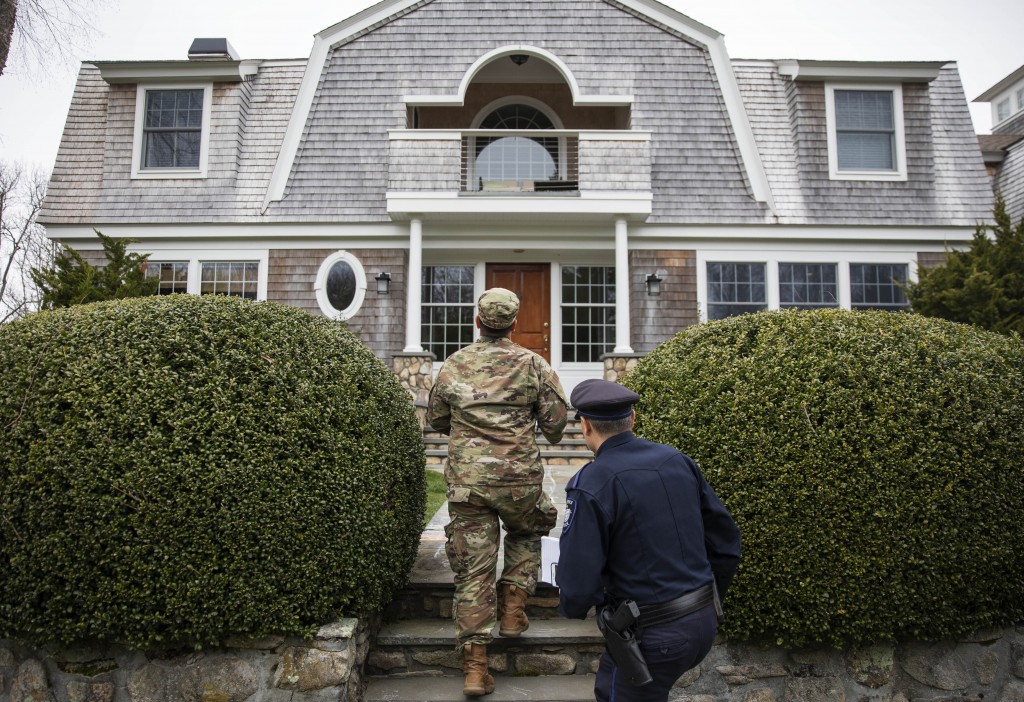 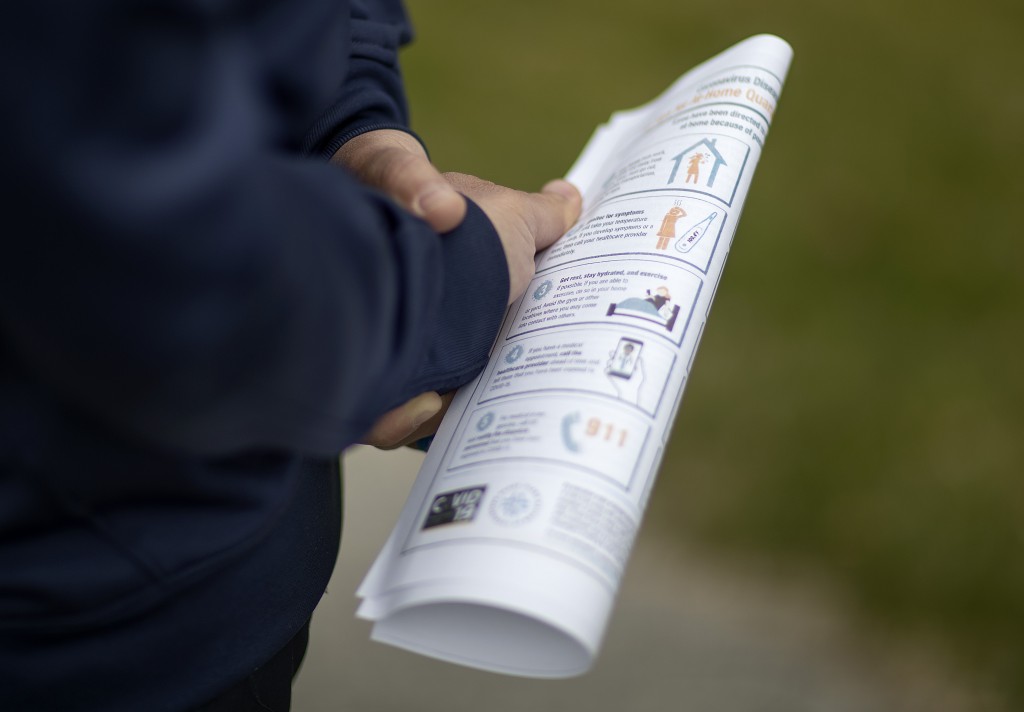 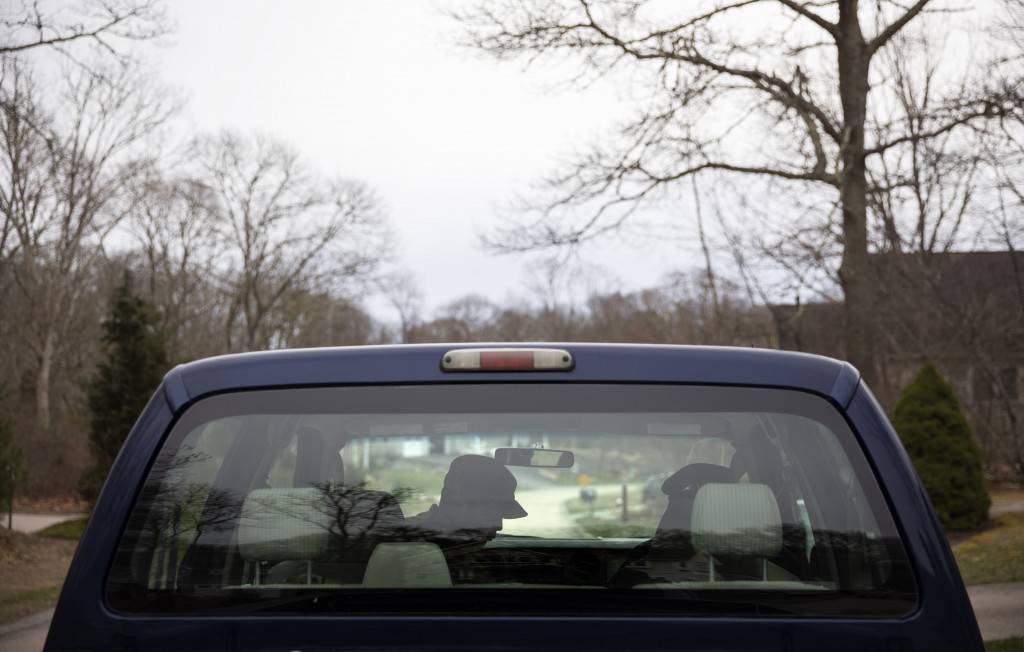 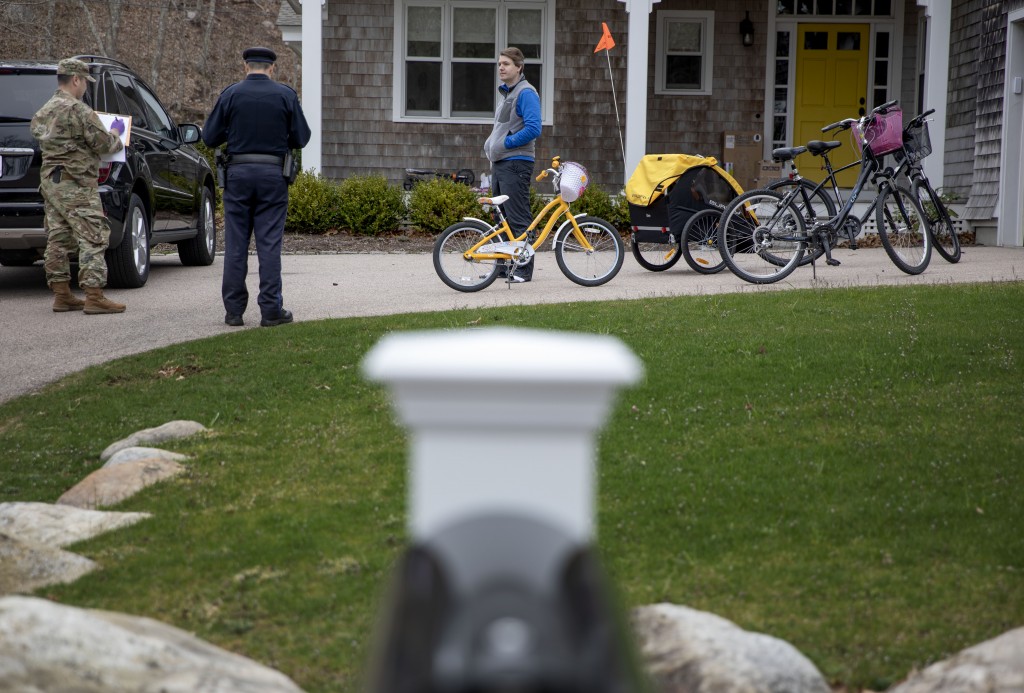 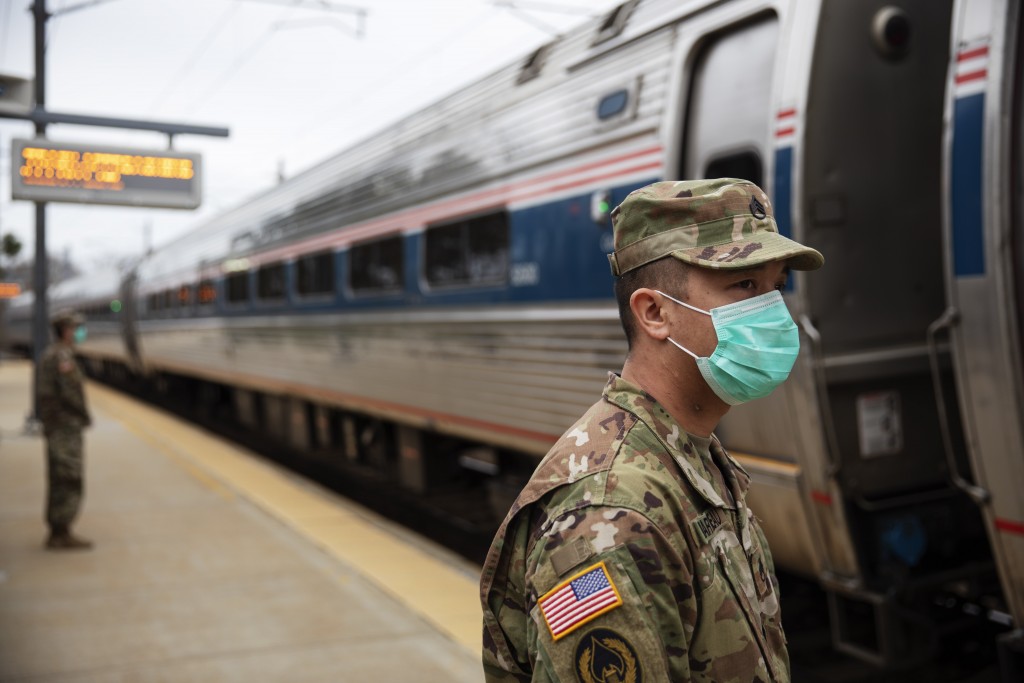 The Rhode Island National Guard started going door to door on Saturday in coastal areas to inform any New Yorkers who may have come to the state that they must self-quarantine for 14 days while Gov. Gina Raimondo expanded the mandatory self-quarantine to anyone visiting the state.

Raimondo also ordered residents to stay at home, with exceptions for getting food, medicines or going to the doctor, and ordered nonessential retail businesses to close Monday until April 13 to help stop the spread of the coronavirus. She also directed realtors and hotel operators to include new requirements that any out-of-state residents must quarantine for 14 days in their purchase agreements.

State Police set up a checkpoint on I-95 in Hope Valley on Friday where drivers with New York license plates must stop and provide contact information and were told to self-quarantine for two weeks, WPRI.com reported.

If New Yorkers don't comply, they face fines and jail time, Raimondo said, adding that that's not the goal.

“I want to be crystal clear about this: If you're coming to Rhode Island into New York you are ordered into quarantine. The reason for that is because more than half of the cases of coronavirus in America are in New York," Raimondo said, adding that it's not meant to be discriminatory.

President Donald Trump said Saturday that he had spoken with some governors and was considering some type of an enforceable quarantine to prevent people in New York and parts of New Jersey and Connecticut from traveling.

Trump told reporters at the White House that it would be for a “short period of time, if we do it at all.” He said he had spoken with Gov. Ron DeSantis, R-Fla., and Andrew Cuomo, D-N.Y., the country's epicenter of the coronavirus pandemic.

Texas Gov. Greg Abbot on Thursday joined other states in imposing quarantines on air travelers from the New York area, including New Jersey and Connecticut, and New Orleans, two places where COVID-19 outbreak is more severe. The Republican said travelers who don’t comply with the 14-day quarantine risk jail time, adding that state troopers would conduct visits to make sure people were staying put.

In Rhode Island, which reported its first two deaths from COVID-19 on Saturday, a team of a Westerly police officer and a Guard member were visiting stately and modest coastal homes in the Westerly neighborhood of Watch Hill collecting contact information from New Yorkers and telling them to self-quarantine. They expected to go to about 1,000 homes over a few days.

"This is more of an education tool to make people aware and comply with what we are asking them to do,” said Westerly, Rhode Island, police chief Shawn Lacey. “We are certainly hope it doesn’t get to enforcement action that has to happen."

Reha Kocatas, a New Yorker who arrived March 22 from the Bahamas to his Rhode Island home, said his wife and two children were visited by a police officer and a national guardsmen. Already under a 14-day quarantine per a state order because he had arrived from outside the 50 states and the District of Columbia, Kocatas said he volunteered information to the authorities including the number of people in the home, when they entered Rhode Island and his and his wife’s date of birth.

But he questioned why it was necessary to send a police officer to his door.

“It seemed like a pretty large waste of resources for something that could have been volunteered through an online form pretty quickly,” he said.

“If New Yorkers are such high risk individuals, why are we putting first responders in front of these individuals is a little questionable since there is no action item at the end of the day," he continued. "They weren’t going to remove us. It seemed like bureaucratic grandstanding. The local community that happens to be here believes that it’s a waste of precious resources when time is the essence in preparing for other things."

Ramaindo said only an estimated 50% of Rhode Islanders are complying with social distancing, with crowds spotted at a beach, groups at parks, crowds at big box stores and house parties. As a result, she banned gatherings of more than five people and urged people to limit interactions to the same five.

For those who are not complying with social distancing: “I've said it last week, I'm going to say it again, knock if off. You are risking the lives of everyone in this state,” she said.

People able to work from home must do so, she said. Residents who work in Massachusetts and must go to work, must self-quarantine after work at home, she said.

For most people, the virus causes mild or moderate symptoms, such as fever and cough that clear up in two to three weeks. For some, especially older adults and people with existing health problems, it can cause more severe illness, including pneumonia, or death.