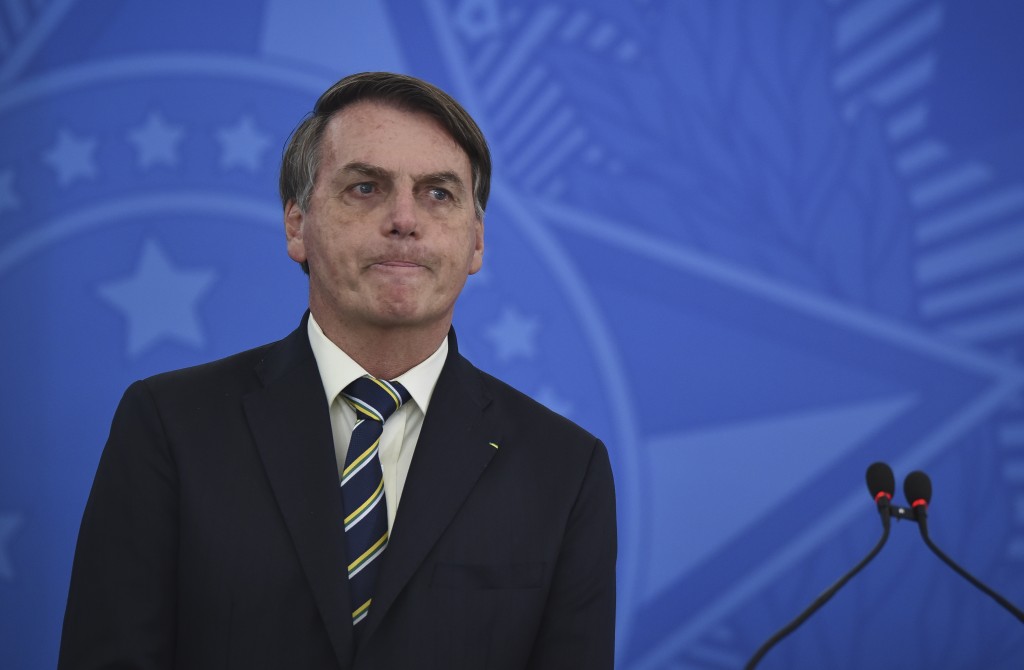 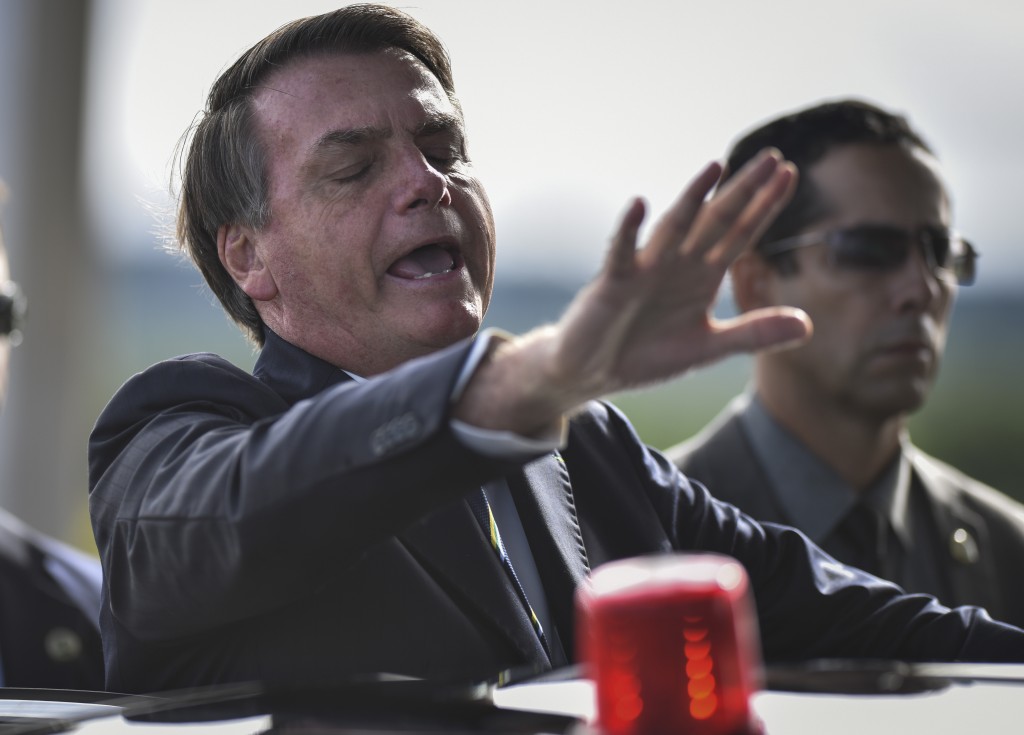 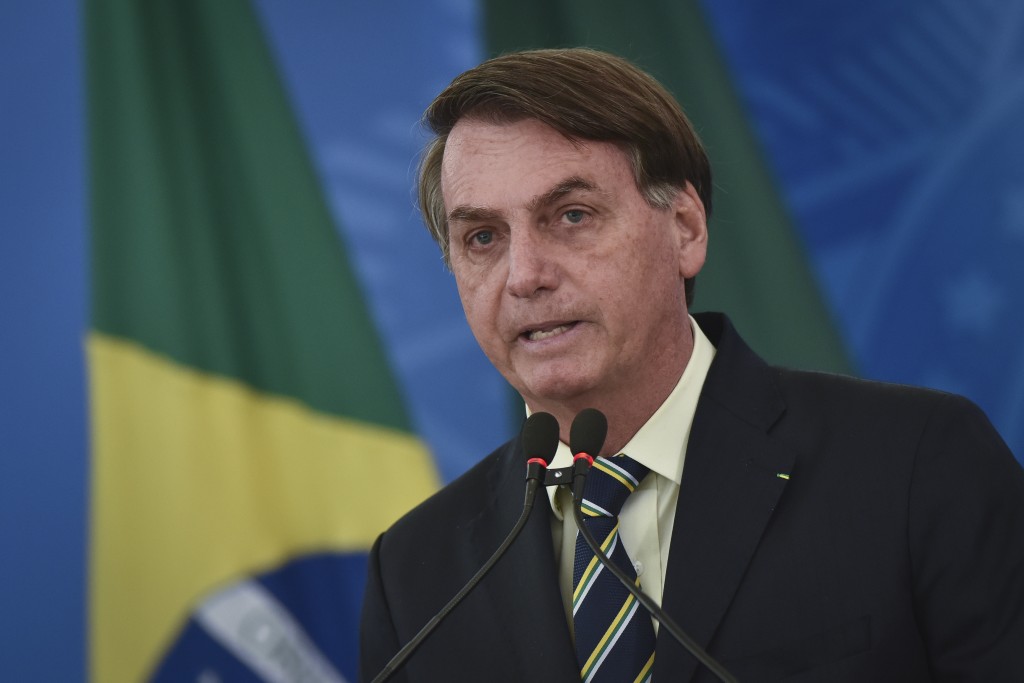 RIO DE JANEIRO (AP) — Even as coronavirus cases mount in Latin America’s largest nation, Brazilian President Jair Bolsonaro has staked out the most deliberately dismissive position of any major world leader, calling the pandemic a momentary, minor problem and saying strong measures to contain it are unnecessary.

Bolsonaro says his response to the disease matches that of President Donald Trump in the U.S., but the Brazilian leader has gone further, labeling the virus as “a little flu” and saying state governors’ aggressive measures to halt the disease were crimes.

On Thursday, Bolsonaro told reporters in the capital, Brasilia, that he feels Brazilians’ natural immunity will protect the nation.

"The Brazilian needs to be studied. He doesn't catch anything. You see a guy jumping into sewage, diving in, right? Nothing happens to him. I think a lot of people were already infected in Brazil, weeks or months ago, and they already have the antibodies that help it not proliferate," Bolsonaro said. "I'm hopeful that's really a reality."

A video titled "Brazil Cannot Stop" that circulated on social media drew a rebuke from Monica de Bolle, a Brazilian senior fellow at the Peterson Institute for International Economics.

“Do you know what will happen, Bolsonaro? Brazil WILL stop. Your irresponsibility will bring thousands to avoidable deaths," she tweeted Friday. "The destroyed lungs of these people, as well as the organs of those who won't be able to have medical care, will fall on your lap. And Brazil will not spare you.”

Does Bolsonaro actually believe, as he says, that the virus will be vanquished by a cocktail of drugs and Brazil’s tropical climate? It’s possible, but analysts say a more calculated political gamble may underlie his increasingly defiant position.

Bolsonaro may have concluded that when he faces reelection in two and a half years, the economy will matter more to most Brazilians than the death toll from coronavirus. By labeling the virus threat as overblown and decrying state governors’ quarantines and shutdowns as unnecessary, he could be preparing to blame others for any recession that might happen.

“If things go really poorly from an economic point of view, he can point his finger at the governors,” Christopher Garman, managing director for the Americas at political risk consultancy Eurasia Group, said by phone. “What he isn’t calculating is the public opinion hit that he can take for being seen to have not handled well the public health crisis.”

The governors of Sao Paulo and Rio de Janeiro, the states hardest hit by the virus, have banned public gatherings, closed schools and businesses and called for strict social distancing. Both are Bolsonaro critics and possible contenders in the 2022 presidential race. They also have backup: 25 of Brazil’s 27 governors signed a joint letter this week begging Bolsonaro to back strict anti-virus measures.

Bolsonaro, a Trump devotee, said he has watched his U.S. counterpart speak about the virus in recent days and found their perspectives rather aligned. Like Trump, he has sought to ease anxiety by often touting the yet-unproven benefits of chloroquine in combating the virus. On Thursday, he eliminated tariffs for the anti-malaria drug.

Local media have counted some two dozen people who tested positive for COVID-19 after traveling with Bolsonaro this month to the U.S. That includes his national security adviser, who this week returned to work at the presidential palace. Bolsonaro says his two tests for the virus came back negative, but he has refused to publish his results.

From the U.S., Bolsonaro called coronavirus fears a “fantasy.’’

As COVID-19 started to spread in mid-March, he issued a lukewarm call for postponement of pro-government demonstrations, then celebrated the rallies and shook supporters’ hands. For a few days, he and his ministers wore masks, but they removed them when speaking. Asked March 23 why they had dispensed with their masks, officials exchanged sidelong glances for a full 15 seconds before a moderator broke the silence to call for the next question.

Bolsonaro returned to a hard line of denial Tuesday in an address to the nation. He demanded that life return to normal and people get back to work. His athletic past, he said, rendered him impervious to the virus. The next morning, he told reporters he and his health minister would decide to isolate only high-risk Brazilians – the elderly and those with preexisting health problems. The minister, a doctor who had earned praise for his no-nonsense crisis management, changed his position and said many quarantine measures had been hasty.

“It’s a very high-risk, tremendous gamble for Bolsonaro and probably it won’t work,” said Michael Shifter, president of the Inter-American Dialogue, a Washington-based think tank. “But I wouldn’t rule out that it could. He could get lucky. It seems like it is going to hurt him significantly, but he has defied the odds before.”

For most people, the coronavirus causes mild or moderate symptoms, such as fever and cough that clear up in two to three weeks. For some, especially older adults and people with existing health problems, it can cause more severe illness, including pneumonia, and death. The vast majority of people recover.

Bolsonaro, a former Army captain, was a fringe lawmaker during his seven congressional terms and gained prominence with a stream of offensive statements. Popular support coalesced around his call for aggressive policing, plans to impose conservative cultural values and promises to rejuvenate the economy. During his 15 months in office, he has battled the media, sought to purge the nation of so-called “cultural Marxism” and dismissed data showing a surge in Amazon deforestation.

He has flouted the international consensus on coronavirus even as Trump has moved toward some World Health Organization recommendations for isolation. Mexican President Andres Manuel López Obrador spent weeks dismissing the coronavirus threat but on Thursday closed government for all but essential work and urged Mexicans to remain indoors.

Brazil's economy still has not healed from a devastating 2015-2016 recession, and the country cannot survive a sustained stoppage without food riots and the like, according to Tony Volpon, chief economist at UBS in Brazil. He supports a shutdown but says the government should develop a plan to gradually ease the restrictions by region and business type, accompanied by ramping up testing and clamping down wherever coronavirus cases spike.

In Sao Paulo and Rio, self-isolating Brazilians have leaned from their windows every night for the past week to bang pots and pans in protest. While that’s not indicative of nationwide discontent, Eurasia’s Garman said, it could spread if the health system begins to collapse.

Bolsonaro’s fate will depend largely on the damage wrought by the disease, according to Thiago de Aragão, director of strategy at political risk consultancy Arko Advice.

If deaths are relatively low and the economy crippled, "public opinion could side with him,” de Aragão said. “If the final outcome is 50,000 deaths and trucks carrying coffins, like in Italy, it will be tremendously negative for the president.”