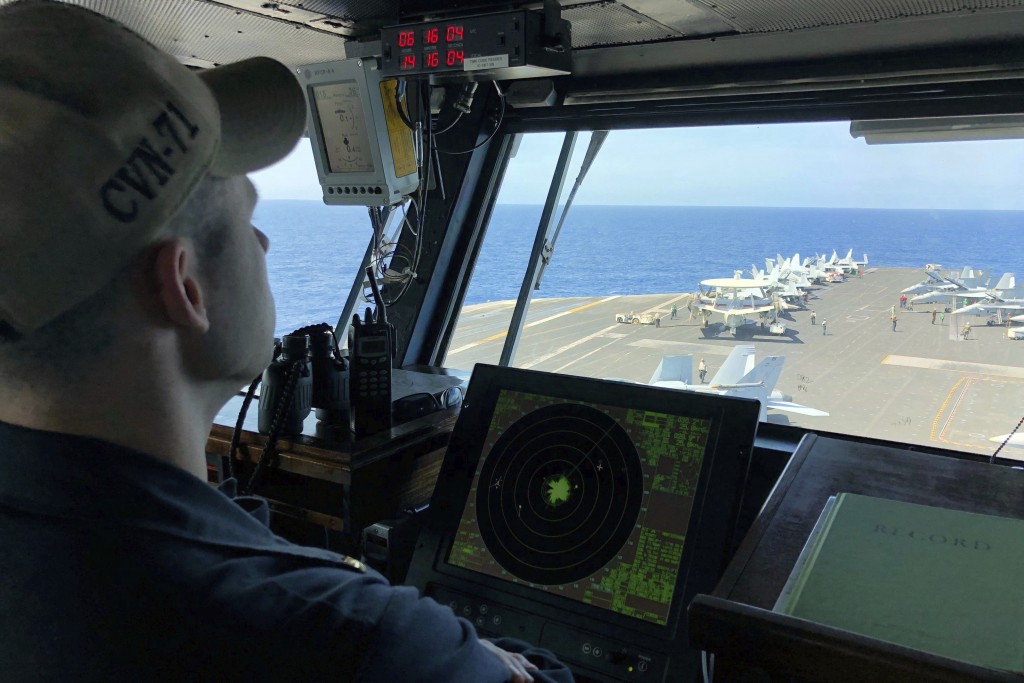 WASHINGTON (AP) — The Navy, the military service hit hardest by the coronavirus, scrambled Friday to contain its first at-sea outbreak, with at least two dozen infected aboard the USS Theodore Roosevelt, one of 11 active aircraft carriers whose mission is central to the Pentagon's strategy for deterring war with China and Iran.

The Roosevelt and its contingent of warplanes may be sidelined for days, sitting pier side in Guam as the entire crew — more than 5,000 — is tested. Navy leaders say the carrier could return to duty at any time if required, but the sudden setback is seen as a harbinger of more trouble to come.

“The Navy is headed into choppy waters in terms of readiness in the months ahead,” says retired Adm. James Stavridis, a former ship commander who rose to become NATO's top commander in Europe.

In Asia, a carrier presence is central to what the Pentagon has identified as a fundamental shift from fighting insurgent and extremist conflicts in the Middle East to a return to “great power competition." That means, principally, a bigger focus on China, including its militarization of disputed areas of the South China Sea.

The carrier, like other Navy ships, is vulnerable to infectious disease spread given its close quarters. The massive ship is more than 1,000 feet long; sailors are spread out across a labyrinth of decks linked by steep ladder-like stairs and narrow corridors. Enlisted sailors and officers have separate living quarters, but they routinely grab their food from crowded buffet lines and eat at tables joined end-to-end.

Although the Navy is much smaller than the Army, it accounts for at least one-third of all reported COVID-19 cases in the military. None has been reported among Navy submarine crews, which are widely deployed and include subs armed with long-range nuclear missiles on constant patrol.

The U.S. Pacific Fleet commander, Adm. John Aquilino, said in an Associated Press interview late Thursday that it’s not clear how long the Roosevelt will be kept in Guam and that its schedule will be adjusted "as needed.” He said no infected sailor is a “critical health risk” but some have been hospitalized.

“We're clearly interested in ensuring that the ship and the crew are healthy” said Aquilino, speaking from his Pearl Harbor, Hawaii, base. “But let there be no doubt the ship's ready to respond if needed.” He said worried family members at home should know everything possible is being done for crew safety.

Family members of Roosevelt sailors have been reaching out to each other on social media. Expressing shock and anxiety, they alternately worried about their family members on the ship and their children at home, sprinkling their posts with questions about local virus testing and memes about toilet paper shortages and pandemic fears.

The Roosevelt had been in the South China Sea, and its most recent port visit had been at Vietnam's popular coastal city of Da Nang earlier this month. The carrier was engaged in an exercise with another U.S. warship in the Philippine Sea when it first detected a COVID-19 infection aboard, other officials said.

Asked if the outbreak came as a surprise, Aquilino said, “We are operating in the area where the disease started. All the risk and the spread of this disease initiated in this theater. So, if we were surprised, we'd be naive.”

Aquilino said procedures are in place to try to minimize any spread of the virus, “and based on the status of the entire Pacific fleet, I'm very happy with the commanding officers and the teams for taking this seriously.”

Acting Navy Secretary Thomas Modly said Friday that it would take 25 days to test all Roosevelt crew members, based on the ship's current testing capability, but that is being augmented urgently. Speaking on the Hugh Hewitt radio show, he said that in broad terms the Navy began thinking about global contingency plans in January, although infections have become pronounced only in recent weeks.

“I think we’re doing okay,” he said. “I think obviously, just like everybody else in this crisis, we’re having to adjust a lot on the fly as we learn more about the virus and how it’s behaving.”

As the most-recognized symbol of American sea power, the Navy's carrier fleet has taken on a bigger role in the Middle East over the past year, returning to persistent patrols in the Persian Gulf as part of the Trump administration's strategy for deterring Iran from attacking U.S. and allied interests in the region.

Two carriers — the USS Harry S. Truman and the USS Dwight D. Eisenhower — are currently in the Arabian Sea amid speculation about further U.S. military retaliation for rocket attacks in Iraq attributed to Iran-backed militias.

The sidelining of the Roosevelt has limited immediate impact on the balance of power in Asia, but it will not go unnoticed in Beijing, which is developing its own carrier fleet.

“You can bet China is watching this closely,” said Michael Mazza, an Asia special at the American Enterprise Institute, a Washington think tank. “Indeed, this comes at a particularly dangerous moment for China's neighbors in the region, especially Taiwan,” which China considers a renegade Chinese province.

In Mazza's view, Chinese President Xi Jinping may see the U.S. as momentarily weakened, even militarily.

He said he's concerned that Xi might be tempted to make a move on Taiwan or in the South China Sea, “driven on the one hand by a need to divert attention from domestic difficulties and to unify the Party at home and, on the other, by an opportunistic impulse to see what he can get away with."

“The current status of the Roosevelt certainly doesn't help keep those temptations at bay.”

Michael O'Hanlon, a defense and foreign policy specialist at the Brookings Institution, cautioned against overreacting to the Roosevelt's outbreak.