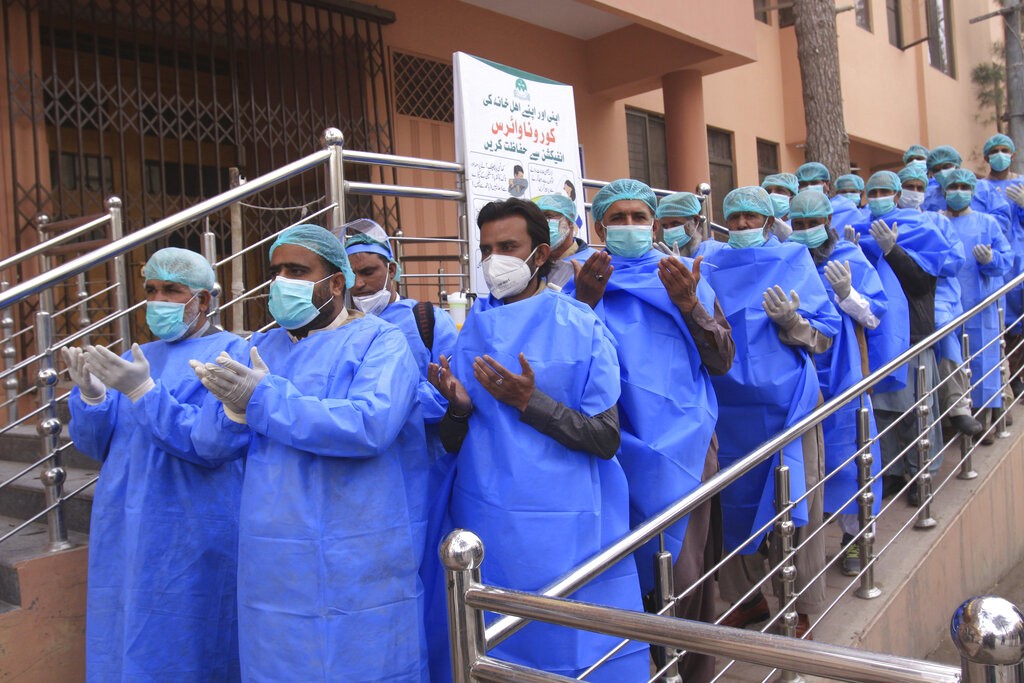 The Latest on the coronavirus pandemic. The new coronavirus causes mild or moderate symptoms for most people, but for some, especially older adults and people with existing health problems, it can cause more severe illness or death.

— Australia to isolate all travelers in hotels for two weeks on arrival.

MANILA, Philippines — The Philippine military chief of staff has tested positive for the coronavirus and the country’s defense chief will also go on self-quarantine after being exposed to him in developments that came as the military is helping impose a massive lockdown to contain the viral outbreak.

Defense Secretary Delfin Lorenzana said he would go on home quarantine starting Friday after having been in two recent meetings with Gen. Felimon Santos Jr., who disclosed that he has been infected with the virus. Both said they were in fine condition.

Lorenzana and Santos have had meetings in recent weeks with President Rodrigo Duterte, who aides said has tested negative for the virus two weeks ago. Most of Duterte’s elite guards have also been ordered to go on quarantine in the Malacanang presidential palace complex.

Lorenzana and other top officials leading an inter-agency group that’s enforcing a lockdown of the main northern Philippine region of Luzon have gone on home quarantine after exposure to infected people. Tourism Secretary Bernadette Romulo Puyat said the group continues to hold meetings online as a health precaution.

Several legislators have also tested positive for the virus or gone on home quarantine, including Sen. Aquilino Pimentel III, who has been threatened with a lawsuit after he went out of home quarantine Tuesday night to take his wife, who was due to deliver a baby, to a hospital, where he got a phone call informing him that a test showed he was infected.

CANBERRA, Australia — Australia’s government says all travelers will be isolated in hotels for two weeks on arrival in an escalation of precautions against the new coronavirus.

Around 85% of Australian COVID-19 patients were infected overseas or were infected by someone who contracted the virus overseas. By Friday, 13 had died.

ISLAMABAD — Authorities in southern Pakistan banned congregational prayers while the country’s President Arif Alvi and several clerics in other parts of the country urged people to pray at home instead of gathering at mosques to avoid the spread of coronavirus.

In one month, nearly 1,200 people have tested positive in Pakistan. There was only one case in February.

It has forced the government to enforce a nationwide lockdown.

In the latest measure, the provincial government in the southern Sindh province banned congregational prayers at mosques. However, it turned down a suggestion about closing mosques.

Government officials have been urging people since the outbreak of the virus to avoid praying at mosques, but the appeals have largely been ignored.

Nine people have died so far because of virus and four are listed in critical condition.

Most of the people who tested positive have a history of traveling abroad, including Iran. However, about 200 people who had no travel history has also been infected, raising fears that the virus will infect more people.

SEOUL, South Korea -- South Korea says it’s considering enforcing self-quarantines on all passengers arriving from overseas as it scrambles to block the coronavirus from re-entering the country amid broadening outbreaks in Europe, the United States and beyond.

Health Ministry official Yoon Tae-ho made the comments on Friday as the country began enforcing 14-day quarantines on South Korean nationals and foreigners with long-term stay visas arriving from the United States while selectively testing those with symptoms.

South Korea is enforcing similar quarantines for passengers arriving from Europe but testing all of them for COVID-19.

There’s concern about a rise in infections in the populous Seoul metropolitan area brought from students and other South Korean nationals returning from the West amid broadening outbreaks and suspended school years.

South Korea’s Centers for Disease Control and Prevention says at least 309 of the country’s 9,332 infections have been linked to recent arrivals, with most of the cases being detected in the past two weeks.

The island province of Jeju says it’s considering pushing criminal charges against a 19-year-old student who returned from the United States last week and her mother for traveling the island for five days through Tuesday although the student was exhibiting chills and other symptoms. The student tested positive for COVID-19 after returning to Seoul on Wednesday.

MANILA, Philippines — The United States and the Philippines have decided to cancel the treaty allies’ largest annual military exercises in May to safeguard the health of thousands of troops amid the global coronavirus pandemic.

“In light of the extraordinary circumstances surrounding COVID-19 pandemic and in the best interest of the health and safety of both countries’ forces, it is prudent to cancel Balikatan 2020,” Adm. Phil Davidson, commander of the U.S. Indo-Pacific Command, said in a statement sent on Friday to news agencies in Manila.

The May 4-15 combat exercises should have involved more than 10,000 American and Philippine military personnel in war maneuvers that in the past included live-fire exercises and humanitarian missions, Philippine military officials said. Australian forces would have joined the drills called Balikatan, Tagalog for “shoulder-to shoulder.”

U.S. and Philippine military officials initially decided to proceed with the exercises despite a notice last month by the Philippine government to terminate a major pact that allowed thousands of American military personnel to enter the Philippines for exercises under a legal framework.

The termination of the Visiting Forces Agreement would take effect in 180 days if both sides would not decide to keep it in future talks.