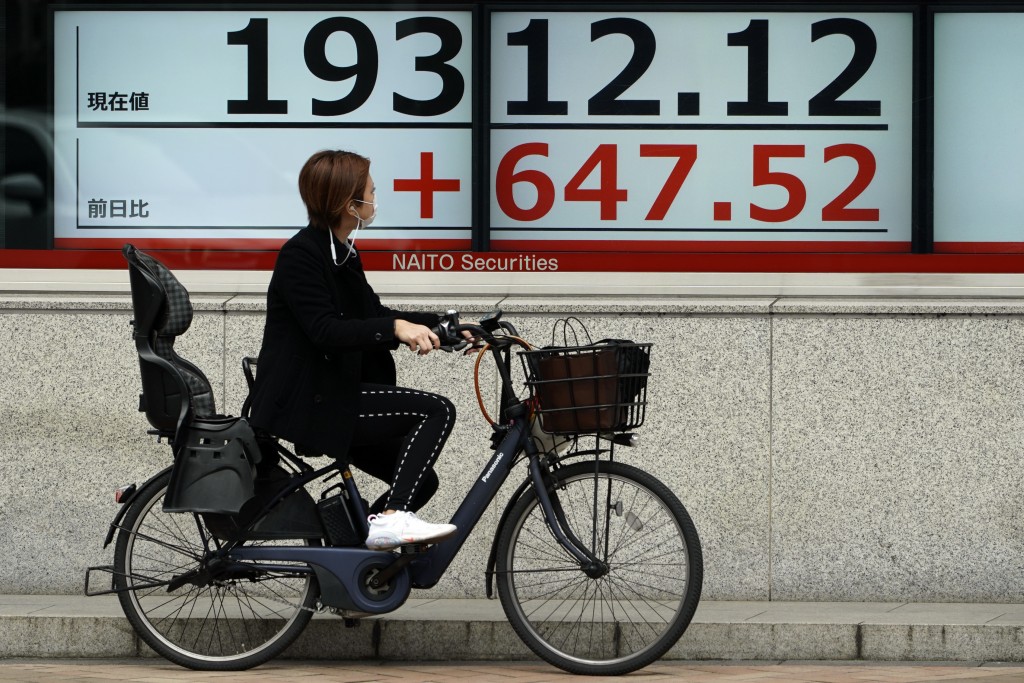 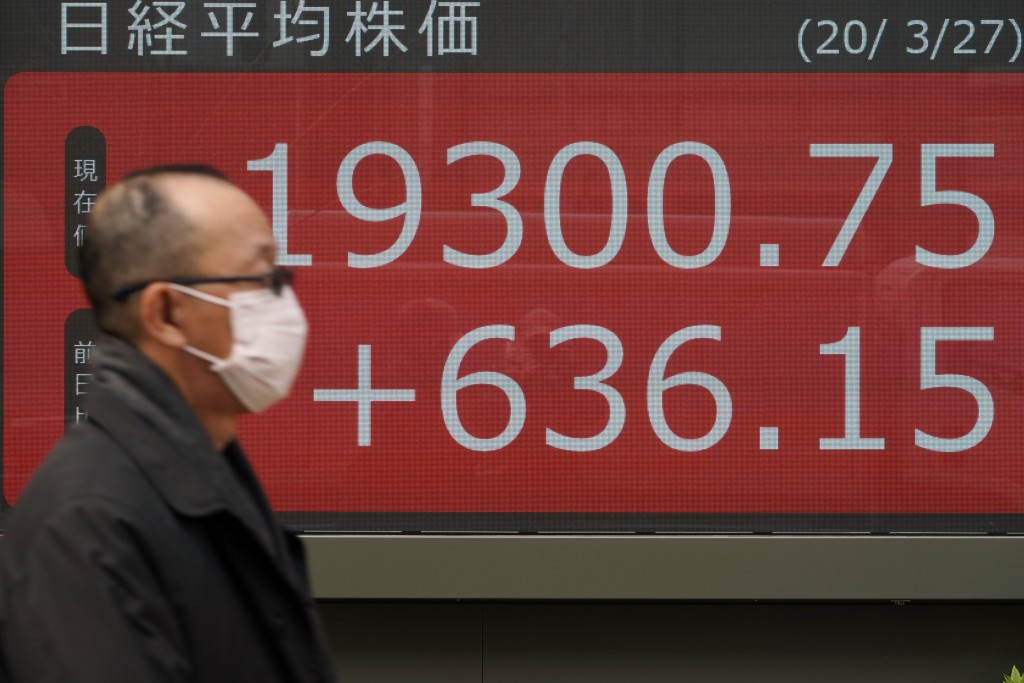 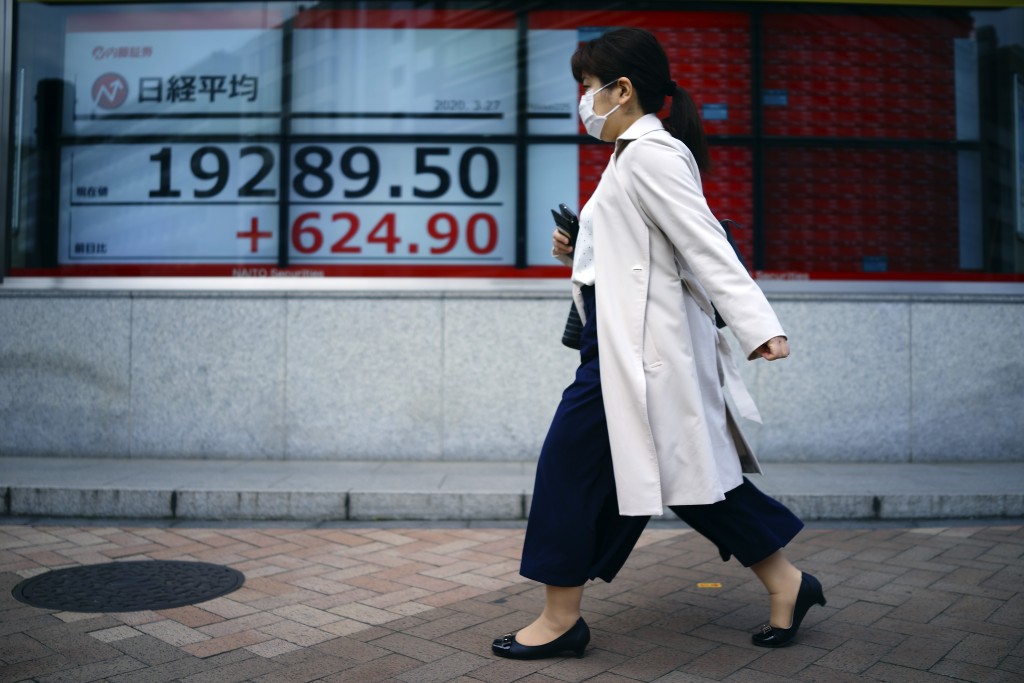 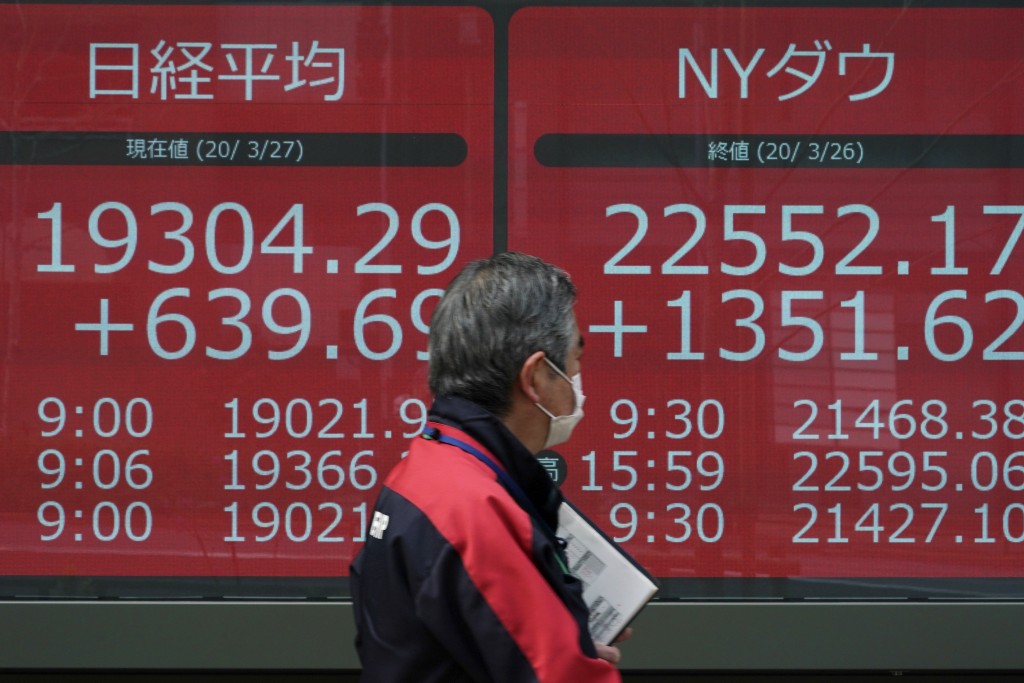 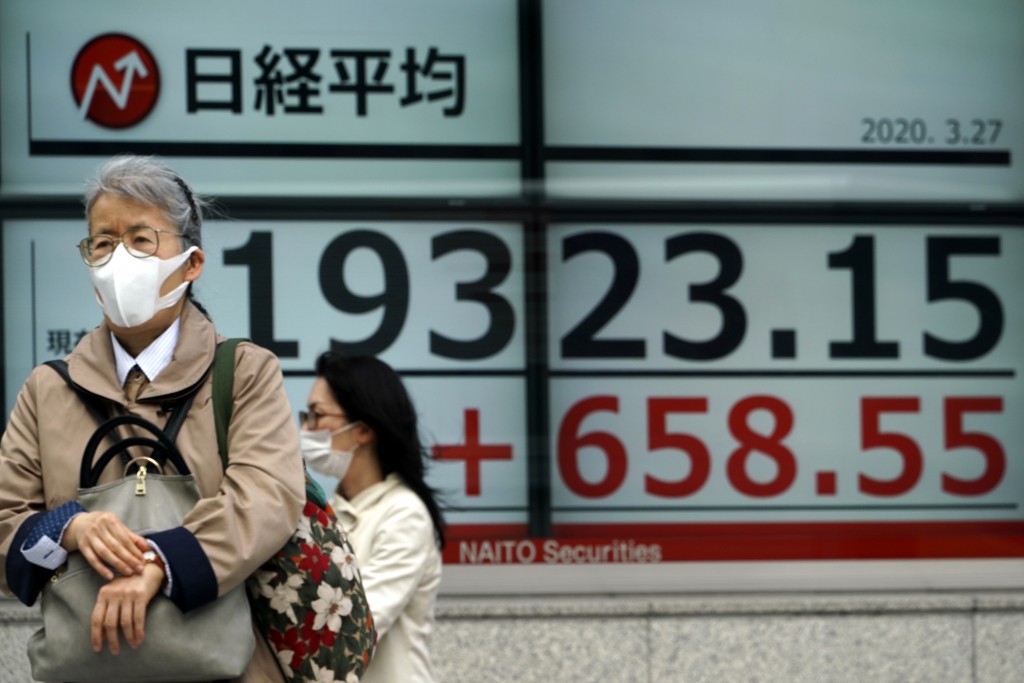 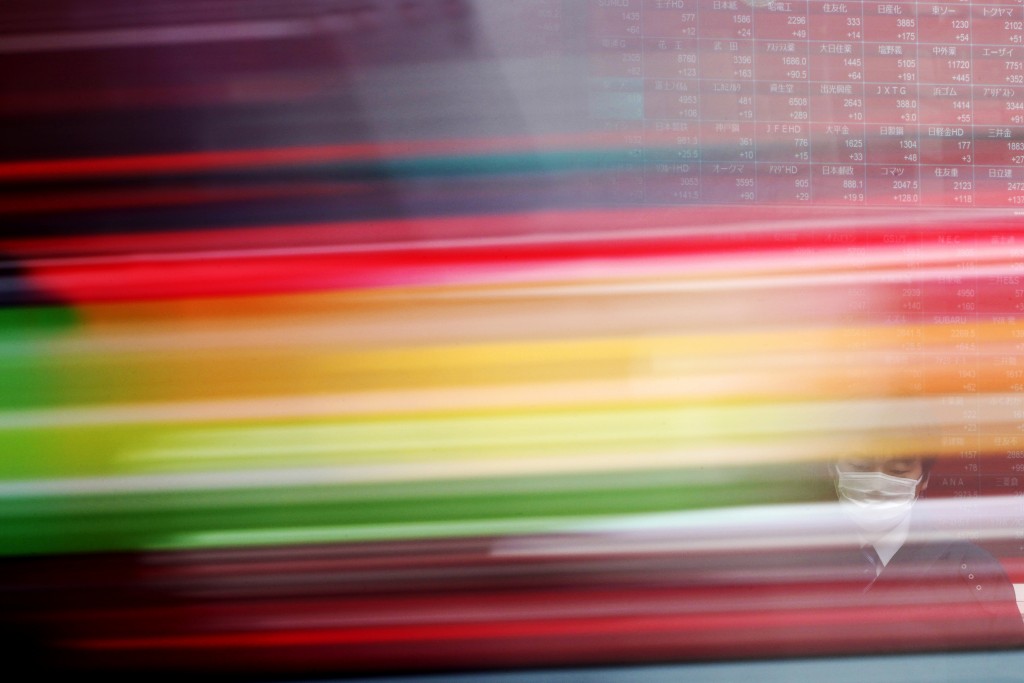 Tokyo jumped 2.5% and Shanghai added 0.9%. Stocks sank 5.3% in Australia, ending a three day winning streak as investors reacted to news that cases of new infections in the U.S. have surpassed China's total.

India's Sensex lost 0.9% to 29,676.97 after the central bank slashed its key lending rate to a decade-low 4.4% from 5.15% to help the economy weather a lockdown aimed at beating the coronavirus outbreak in the world's second most populous country.

Overnight, Wall Street appeared to shrug off miserable news on unemployment as the S&P 500 rose 6.2%, bringing its three-day rally to 17.6%. The Dow industrials have risen an even steeper 21.3% since Monday.

Nearly 3.3 million Americans applied for unemployment benefits last week, shattering the prior record set in 1982, as layoffs and business shutdowns sweep across the country.

Analysts said the market shot higher Thursday because the bad news on unemployment was expected. The gains earlier this week came as Capitol Hill and the Federal Reserve promised an astonishing amount of aid for the economy and markets, hoping to support them as the outbreak causes more businesses to shut down by the day.

“There is no sugar coating these numbers — they are bad,” said Jamie Cox, managing partner for Harris Financial Group. “Markets have had several days to digest what everyone knew was coming; therefore, the market response to these numbers may differ than what people might expect.”

Despite the big gains, the S&P 500 remains 22% below its February high and analysts expect more dire economic headlines, and market turbulence, in the days ahead.

Companies are also expected to report discouraging results in just a few weeks as earnings season begins. Very few have dared to issue forecasts capturing how big a hit the virus will inflict on their profits.

Late Wednesday, the Senate unanimously approved the $2.2 trillion coronavirus relief plan, which includes direct payments to U.S. households and aid to hard-hit industries. The House of Representatives is expected to pass it Friday.

The prospect of a big financial shot in the arm for businesses and households helped offset some of the concerns about the steep job losses the economy is beginning to see due to the coronavirus.

With the U.S. stimulus bill at $2 trillion, about a tenth the size of the U.S. economy, “it remains difficult to imagine what this could do in the longer term in terms of restoring confidence once again without a material improvement of the coronavirus landscape," Jingyi Pan of IG said in a commentary.

Benchmark U.S. oil was steady, gaining 42 cents to $23.02 per barrel in electronic trading on the New York Mercantile Exchange. It slid 7.7% on Thursday to settle at $22.60 a barrel. Goldman Sachs has forecast that it will fall well below $20 a barrel in the next two months because storage will be filled to the brim and wells will have to be shut in.

Brent crude, the international standard, added 20 cents to $28.85 per barrel.

So far, there's no been reassurance on the spread of the pandemic.

The United States has reported more than 85,000 known cases, and the worldwide number of infections has topped a half-million, according to Johns Hopkins University. The death toll has climbed to more than 24,000, while more than 120,000 have recovered.

For most people, the new coronavirus causes mild or moderate symptoms, such as fever and cough that clear up in two to three weeks. For some, especially older adults and people with existing health problems, it can cause more severe illness, including pneumonia and death.

The yield on the 10-year Treasury fell to 0.80% on Friday from 0.83% late Thursday. It had been as low as 0.77% just before the jobless report was released. Lower yields reflect dimmer expectations for economic growth and greater demand for low-risk assets.

Boeing continued to climb after soaring more than 24% Wednesday in part on expectations that it stands to gain from the Congressional aid package. The aircraft manufacturer was the biggest gainer in the Dow Jones Industrial Average, rising 13.7%.

Despite the solid rally this week, analysts say further big drops are common until there have been enough sustained gains in the market to ease investors' fear of further declines.

"Historically, you do test the bottom one, two, three times before you're convinced it's over and then you build up again toward that viable rally," said Quincy Krosby, chief market strategist at Prudential Financial. “What you have here, obviously, is a concern about how deep the recession is going to be and when are we going to come out.”