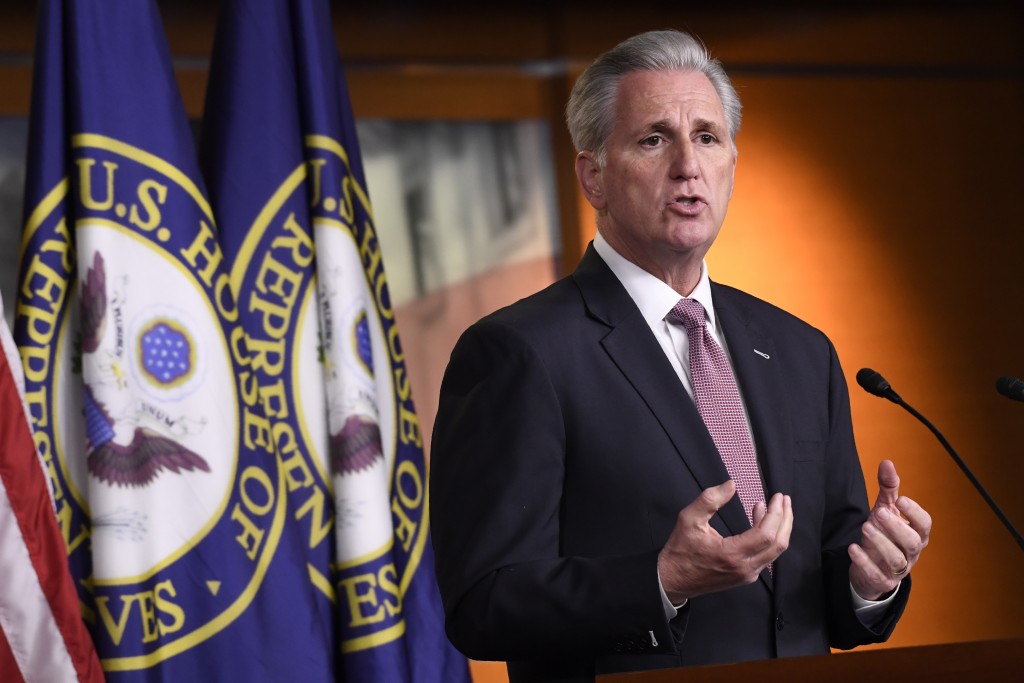 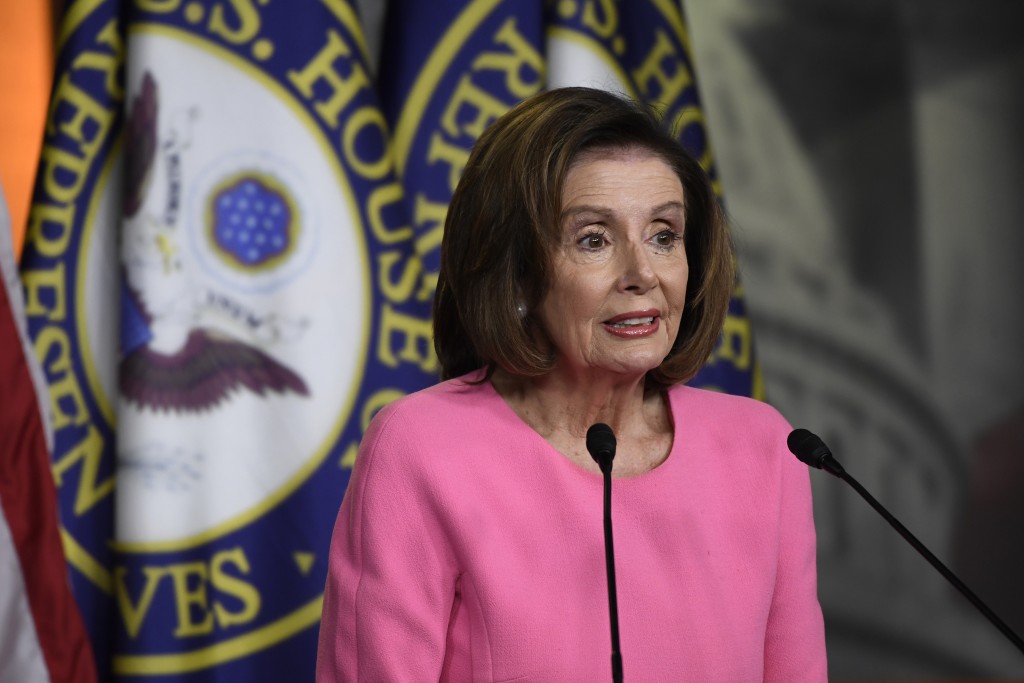 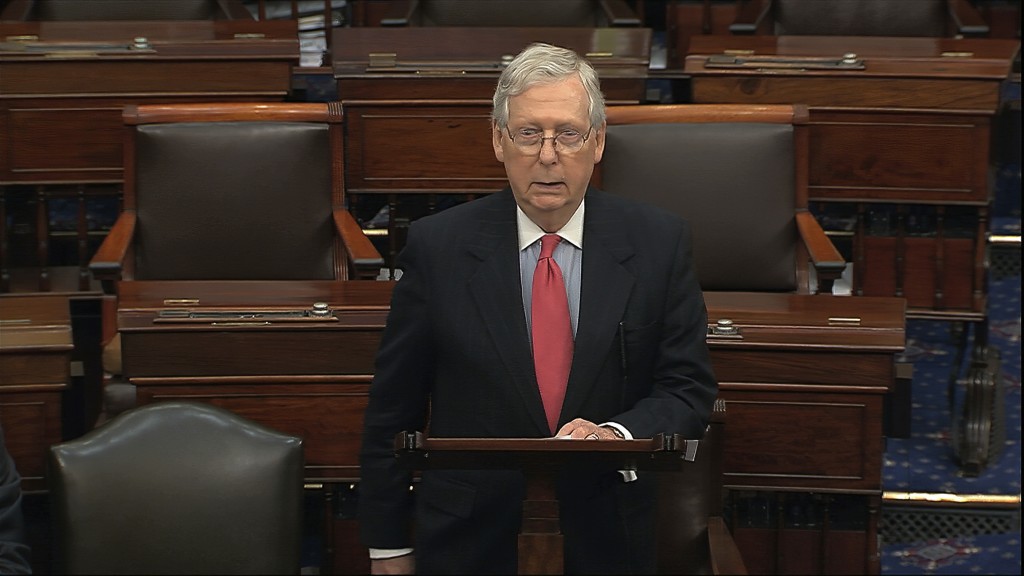 WASHINGTON (AP) — President Donald Trump declared that "I'll be the oversight" as lawmakers were in the final days of drafting what became a $2.2 trillion rescue plan for American businesses. In the end, Congress ensured that won’t be the case.

The legislation, designed in part to help businesses and corporations hammered by closures due to the coronavirus pandemic, creates multiple layers of accountability for the billions of dollars in loans, grants and direct cash that will soon flow from the federal government. The House is expected to pass it Friday and send it to Trump for his signature.

The new oversight system will test the relationship between the White House and Congress, which frayed after Democrats won the House and deteriorated severely during Trump's impeachment as officials flouted requests for witnesses and documents.

Trump’s assertion of responsibility for the coronavirus funds came Monday evening as his Treasury secretary, Steven Mnuchin, was on Capitol Hill crafting the package in late-night meetings with Senate Democratic Leader Chuck Schumer. Senate Majority Leader Mitch McConnell, R-Ky., and House Speaker Nancy Pelosi, D-Calif., had each introduced their own proposals, and Democrats said the Republican bill wasn’t strong enough, arguing that it would create a “slush fund” for corporations.

In the end, the bipartisan final package incorporated much of what Democrats wanted, creating a trio of watchdogs, plus other checks, to try and ensure the money isn’t misused. It establishes an oversight board made up of inspectors general, called the Pandemic Response Accountability Committee, stands up a separate dedicated inspector general position at the Treasury Department and creates a new committee of experts that reports to Congress.

Other accountability measures include more money for watchdogs in multiple federal agencies and requirements that the administration file detailed reports that analyze the flow of cash as it happens.

“Whenever you are appropriating over $2 trillion dollars it’s important to ensure the money is spent the way it’s intended,” says Michigan Sen. Gary Peters, the top Democrat on the Senate Homeland Security and Governmental Affairs Committee. Peters helped negotiate the oversight provisions with Schumer and the GOP chairman of the panel, Wisconsin Sen. Ron Johnson.

“This needs to be outside of politics, that’s the only way it has any credibility,” Peters said.

Maloney praised the economic relief bill, but said in an emailed statement said that Democrats “think it could go even further to protect American taxpayers, and we are continuing to examine additional options."

Watchdog groups that track government spending and oversight said the bill wasn't perfect, but provides essential resources as the pandemic worsens. Sean Moulton, a senior policy analyst at Project On Government Oversight, said his group is encouraged that there is “more than one lens of accountability” for the businesses that will be receiving the money.

“We’re pleased that they aren’t putting all of their oversight eggs in one basket,” Moulton said.

Lisa Gilbert, vice president of legislative affairs for the consumer advocacy group Public Citizen, said she believed that Trump’s declaration that he could personally oversee the process likely ensured that stronger provisions were included. “It showed his hand,’’ Gilbert said.

The bedrock of the new oversight is the Pandemic Response Accountability Committee, which will be made up of independent inspectors general. Modeled after a similar board created to monitor the 2008 Troubled Asset Relief Program that rescued banks, the panel will have the ability to obtain documents, coordinate audits and identify waste and abuse. The board will report what they find on a central website.

Separately, Trump will appoint a special inspector general inside the Treasury Department who will be able to inspect records and review how the money is doled out. That position will be confirmed by the Senate - a process that could take weeks if the chamber stays out until April 20, when senators are currently scheduled to return.

Democrats also secured the creation of a Congressional Oversight Commission that will oversee the Treasury Department. Experts on the panel will be appointed by House and Senate leaders. Maloney said “the ideal makeup” of the panel would be a diverse set of experts “to complement the other oversight bodies established under the bill.”

The legislation also includes a provision ensuring that bailout funds are not given to companies where a federal official, including the president, has at least a 20 percent interest. Language directed at airlines would block stock buy-backs and limit executive compensation.

Oversight groups fret that the legislation doesn’t give the inspector generals panel subpoena power. They also note that Trump will be the one to appoint Treasury's inspector general, a potential wild card.

“It’s all very personality driven,” said Scott Ellis of the group Taxpayers for Common Sense. “(Inspectors general) can be very effective and not so effective.”

Negotiations on the bill churned until the end, with Democrats complaining in the hours before the vote that bipartisan language requiring the government to publish weekly lists of companies and entities that gain financing through the bailout funds was left out. Without this language, this information could have been kept secret from public, the Democrats argued. The language ended up in the final version.

And though the end product was bipartisan — the Senate vote was 96-0 — the two parties had sharp disagreement. Republican Sen. James Lankford, R-Okla., said on the Senate floor before the bill was passed that Democrats "wanted to make sure there was great transparency because they didn’t trust the Trump administration. So they built in an inspector general and additional people to watch the Treasury through the process.''

Lawmakers need to “make sure money actually ends up in the pockets of workers, not CEOs,’’ Brown said.