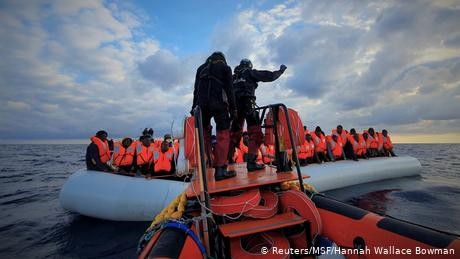 "The number of deaths is going to increase in the long term, unfortunately," says Frederic Penard, the head of operations at SOS Mediterranee, which describes itself as "a maritime and humanitarian organization for the rescue of life" in the Mediterranean. He told DW that there were hardly any ships willing to rescue people in distress off the coast of Libya. Yet, he pointed out, Operation Sophia, formally known as the European Union Naval Force Mediterranean (EU NAVFOR Med), had saved tens of thousands of lives — the figure given oscillates between 43,000 and 50,000 — between 2015 and 2018. Most of them were people who had tried to make their way from Libya to Italy or Malta in unstable rubber dinghies or unseaworthy wooden boats and who were rescued after getting into distress. Operation Sophia was named after a girl who was born on a German frigate that had rescued her mother.

In summer 2018, however, the EU changed its policy, succumbing mainly to pressure from the new Italian governing coalition comprised of the far-right League and the Euroskeptic Five Star Movement. Within weeks, Operation Sophia no longer had any access to ships and could thus not send out any rescue missions. The governments in Rome, Budapest and Vienna remained in favor of preventing human smuggling and arms trafficking, which was the operation's mission, but they also wanted to stop tens of thousands of people coming into Europe from Africa and Asia. When German Chancellor Angela Merkel tried to resist these three administrations, they linked forces with other EU governments and Operation Sophia's activity was suspended.

Read more: Can the EU's new arms-embargo mission to Libya be effective?

NGOs and humanitarian organizations had seen this coming. Hassiba Hadj Sahrouai, a humanitarian affairs adviser for Doctors Without Borders, told DW that the EU had "completely abandoned" the idea of rescuing lives. She criticized the EU's close cooperation with the Libyan coast guard and said that this partnership was "cynical," particularly considering that there was proof of massive human rights violations committed by the coast guard.

She said that the military command of Operation Sophia had given information such as the coordinates of people in distress to the Libyan coast guard so that they could be rescued and brought back to Libya but had kept this information from civilian ships that could have saved their lives. She and other NGOs insist that the EU should not send anybody back to a country that is embroiled in a long-running civil war and where there is anarchy in many parts.

Read more: Are Germany and the EU prepared for a new influx of refugees?

'We rescued lives together'

The relationship between NGOs and the military command of Operation Sophia was not always so tense. Both Doctors Without Borders and SOS Mediterranee confirm that they and other humanitarian organizations worked in close cooperation with Operation Sophia in 2015 and 2016. "We rescued lives together," says Hassiba Hadj Sahrouai. But this cooperation gradually foundered because the EU ultimately wanted to leave the refugees in Libya, she says.

Politicians in Italy and Hungary claimed that it was rescue missions that encouraged refugees to attempt the sea voyage from Libya in the first place, but NGOs reject this accusation, and studies provide evidence to the contrary. It is the weather that makes a difference. More people attempt the perilous journey across the Mediterranean when the temperatures rise, and the wind is right. Moreover, the situation in Libya itself plays a crucial role. The more dangerous the war becomes, the more people try to leave the country.

German Foreign Minister Heiko Maas had been negotiating a new mission to replace Operation Sophia with his European counterparts for months. On Thursday, 27 EU states agreed to mission Irini. But Maas was one of those to make it clear that the mission's main mandate would be to monitor the arms embargo. The ships and aircraft are to patrol some 100 kilometers (62 miles) of Libya's eastern coast, even though barely any refugees or migrants have set off for Europe from here in the past few years.