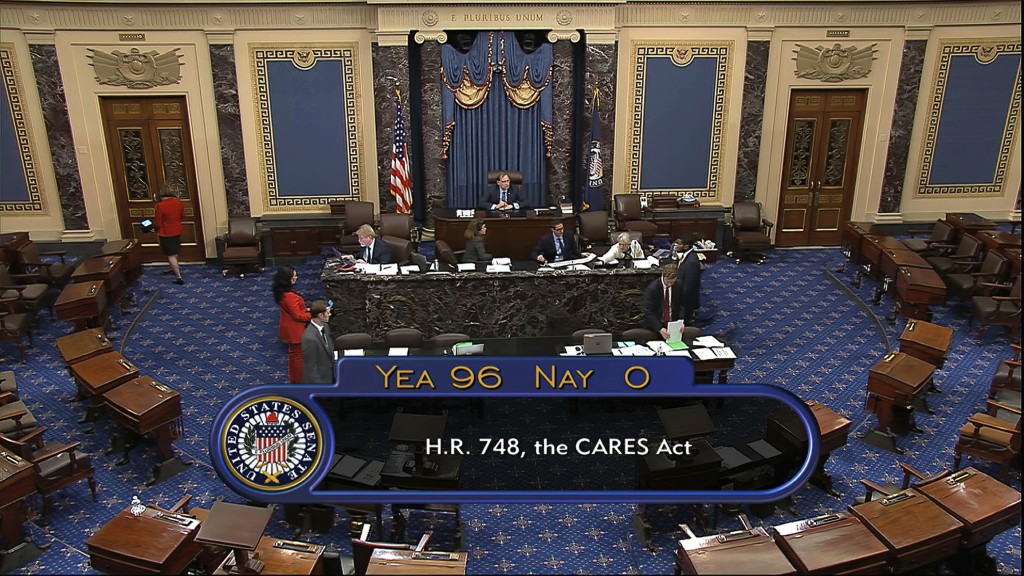 WASHINGTON (AP) — Officials in the nation's capital lashed out Thursday at the $2.2 trillion coronavirus economic relief package moving through Congress, saying it cheats Washington, D.C., of more than $700 million by treating it as a territory rather than a state.

“It's shocking. It's infuriating. It's wrong. It's outrageous,” Mayor Muriel Bowser said. "We just need to be treated fairly. We're not asking for special treatment."

The bill was approved by the Senate late Wednesday night and should face a vote in the House of Representatives on Friday.

The package classifies the District of Columbia as a territory rather than a state. It stipulates that Washington, along with five other U.S. territories, would divide $3 billion by population, meaning the District would receive only about $500 million. That's less than half the minimum $1.25 billion guaranteed to each state.

Phil Mendelson, chairman of the District of Columbia Council, said he and the city's government were blindsided by the stipulation and only learned of it late Wednesday afternoon.

“If you think about it, it really makes no sense,” Mendelson said.

Washington residents pay federal taxes, unlike territories such as Guam, American Samoa, Puerto Rico, the U.S. Virgin Islands and the Northern Mariana Islands. The District has no representation in the Senate and one non-voting delegate in the House.

That delegate, Rep. Eleanor Holmes Norton, said in a statement that she protested the stipulation in vain prior to Wednesday's vote and “asked the Senate to fix what I believe was an oversight.”

In the district, 231 people had tested positive for coronavirus as of Thursday evening; three people died.

The dispute opens a new chapter in the District of Columbia's tortured relationship with the federal government. Officials here have long campaigned for the district to formally become the nation's 51st state, pointing out that it has a larger population than Wyoming and Vermont, and its residents pay more in federal taxes than 22 states. The long-simmering resentment over the issue is embodied in the defiant motto stamped on every DC licence plate: “Taxation Without Representation.”

Bowser said the controversy shines a light on the need for Washington to have proper representation in Congress.

“It matters, not having two senators. That's why we have pushed so hard for statehood," she said.

The decision is particularly confusing, Bowser said, since the district is traditionally treated like a state in most other federal funding formulations such as housing and education. Bowser said she had spoken with Norton, but seems resigned to this package passing without the issue being addressed.

“It's unlikely there will be a lot of changes for this round,” Bowser said, but she promised that Norton “would be working on the next round (of relief legislation) to make sure that it's fixed.”

“It was curious that in this bill, they decided to treat the District of Columbia in a very discriminatory way," she said Thursday. “It doesn't face the realities of a public health crisis that we have in our country and goes out of its way to do something so out of the ordinary.”

Bowser and Pelosi both spoke of the classification as an unexplained mystery and hinted at some sort of personal or political motivation behind the scenes.

“There will be a lot of intrigue behind whose motives got us to this point,” Bowser said. “We'll get to the bottom of how they ended up treating us like a territory.”

"It really makes no sense, unless you have some other motivation,” Pelosi said. “It was a decision, it wasn't an accident.”