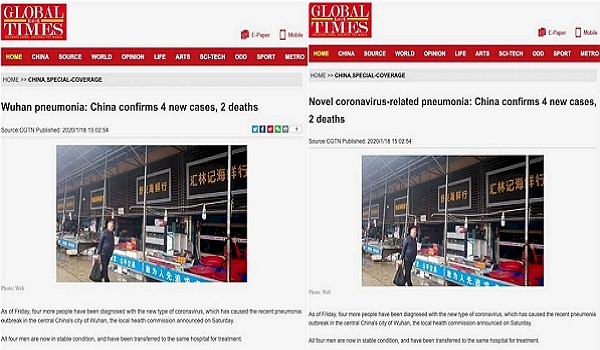 TAIPEI (Taiwan News) — A Twitter user with the account name "LIFETIME" on Wednesday (March 25) posted screenshots of a Global Times article to prove the Chinese newspaper agency has been removing the term "Wuhan virus" from previous reports.

The Twitter user claimed the English news site under the state-run People's Daily has been tampering with the content of several articles published in January. As evidenced by screenshots, the Global Times has altered "Wuhan pneumonia" to "novel coronavirus-related pneumonia" in the title of a report on China's coronavirus infections.

Another Twitter user, with the account name @iambadbears, responded to the post saying that Xinhua News Agency, which is also run by the Chinese Communist Party (CCP), has been engaging in similar acts. He proceeded to add screenshots that show that the government mouthpiece changed an article titled "Wuhan virus sees Olympic football qualifiers moved" to "Olympic football qualifiers moved from Wuhan to Nanjing."

The post has attracted a huge response from both Taiwanese and Chinese. One netizen pointed out that the CCP has been preying on the innocent for decades and is responsible for the persecution of its opposition, while another said there will be no traceable records of the outbreak in China once it ends.

Since its first domestic infection, China has on many occasions pressured the global community into censoring comments that connect COVID-19 to China. Earlier this month, China's Ministry of Foreign Affairs even tried to shift the blame by accusing the U.S. military of bringing the virus to the city of Wuhan.