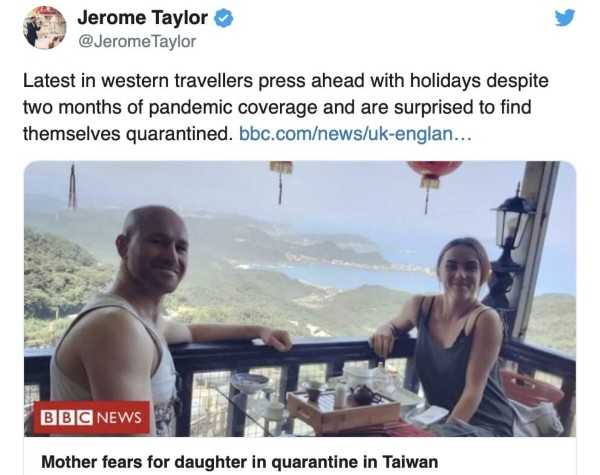 TAIPEI (Taiwan News) — After a British woman alleged her daughter was being held in "prison-like conditions" during her quarantine, Taiwan's Central Epidemic Command Center (CECC) head explained the reason behind the change in her accommodation and denied any maltreatment of the woman whatsoever.

On Thursday (March 26) the BBC released a report in which a British woman identified as Jill Weaver claimed her daughter had been "incarcerated" and separated from her partner. During a press conference later that day, Health Minister and CECC head Chen Shih-chung (陳時中) explained the circumstances of their housing arrangements and denied any intentional ill-treatment.

Weaver claimed her 28-year-old daughter, Natalie Dawson, along with her Australian partner, Rohan Pixley, had originally planned a stopover in Taiwan on their way to Australia. However, as the Wuhan coronavirus (COVID-19) pandemic escalated, their flight to Australia was canceled and a new rule was put in place requiring travelers to undergo a 14-day quarantine in Taiwan.

Weaver claimed the couple agreed to undergo their quarantine in the hotel they had originally booked for their stay. However, she claims they were suddenly moved by ambulance to an "unknown location."

Dawson's mother complained that "They are locked in and they can't get out," and she decried the fact that they only receive three meals a day. She claimed the food is "of poor quality and meager portions."

She went on to allege, "The room is filthy. She has no hot water and nowhere to wash her clothes." Weaver said the couple understands the need to undergo quarantine but claimed the conditions they were being kept in are "just awful."

Weaver also expressed concern that her daughter has celiac disease, which requires a special diet. However, she conceded that those in charge of providing meals are accommodating her special dietary needs.

When their quarantine ends on Saturday (March 28), they will be expected to pay £6.25 (US$7.44) for each night. This includes the cost for room and board, according to the report.

When asked to comment on the report during the press conference, Chen explained that the pair arrived in Taiwan on March 14 and that according to regulations, they are required to undergo home quarantine for 14 days. However, he said that because they did not have adequate funds to stay in the hotel during that period, they were then relocated to a quarantine facility arranged by the Hualien County Government.

Hualien County Department of Medical Affairs Director Chu Chia-hsiang (朱家祥), who assisted in arranging quarantine for the couple, said they had originally been staying at a bed and breakfast in Hualien, reported CNA. The authorities originally agreed they could stay there, but the two travelers said they did not have enough money to stay for the duration of the quarantine. Chu said they then transferred the pair to a quarantine facility on the outskirts of Hualien City. He said they would not be charged to stay at the center, but they would be asked to pay NT$250 to cover the cost of three meals a day.

According to Chu, each floor of the quarantine structure was divided into four rooms, with one person assigned to each room. He said that each room is about 8 ping (a ping equals 3.3 square meters).

Each room comes with a desk, bed, home care package, and internet access, said Chu. He said there is a staff member assigned to provide each person with meals and to remove refuse.

Each floor has separate public toilets and bathrooms for men and women. Chu said the British couple were the first to move in and were placed on different floors before five more people checked in.

Chu said that many people had stayed in the building before and never had a problem with hot water. He said that he checked in with residents every day, never received any complaints, and was shocked by the BBC report.

Chen Shih-chung admitted the hot water heater had broken down when the couple checked in on March 15. Chen added, however, that it was repaired at 2 a.m. in the morning.

Chen then stressed, "We never treated her badly" (我們絕對沒有虧待他), reported Heho. He added that if the couple required assistance, either of them could contact diplomatic units for help.

Meanwhile, Dawson's home country, the U.K., is in lockdown and also imposing 14-day quarantines, in quarantine facilities when necessary. The UK currently has 9,529 confirmed cases, and 465 have died, while Taiwan has only 252 confirmed cases including two deaths.