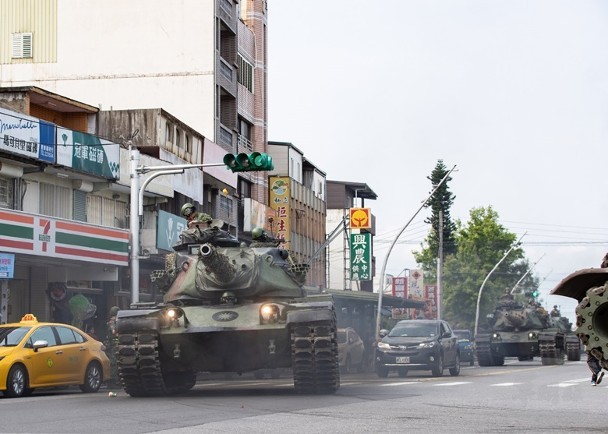 On Wednesday, the third day of military exercises being held across Taiwan, four army M60A3 tanks took part in a training exercise in Yilan County's Yuanshan Township. The rare sight of tanks rolling through an urban area drew many curious onlookers.

According to Taiwan's Military News Agency (MNA), the drill was meant to improve the combat effectiveness of the Taiwan Army. Four tanks from the army's Lanyang Area Command drove through Yuanshan Township in order to prepare for urban combat. The drill simulates the army's response to an invasion by the People's Liberation Army (PLA). During the drill, the tanks moved into tactical positions and found cover or used camouflage to conceal their positions.

The purpose of the exercise was to train tank crews to find ways of protecting and concealing themselves during the first wave of attacks, in order to enable them to launch effective counter-attacks. The Ministry of National Defense (MND) said the drill improves the army's ability to "conceal, cover, camouflage, deceive, and maneuver."

Tanks being a rare sight on Taiwanese streets, many civilians rushed to watch the massive tanks roar past. In an apparent bid to distract from its disastrous handling of the COVID-19 outbreak and to show that it is still in control, Beijing has stepped up its provocative military actions around Taiwan in recent weeks. On March 16, Chinese fighter jets and early warning aircraft were, for the first time ever, seen flying a night mission near Taiwan’s airspace.

Just three days later, Coast Guard Administration (CGA) 9th Offshore Flotilla based in Kinmen reported that its vessels were attacked by more than 10 Chinese speedboats, which hurled rocks and bottles at the cutters. During the skirmish, CP-1022, which had begun active duty on March 13 and cost NT$6 million (US$197,000) to build, was intentionally rammed from behind by the speedboats.

Meanwhile, the U.S. has been highly active in the region recently, with the U.S. Navy guided-missile destroyer firing a missile during a live-fire exercise in the South China Sea on Tuesday (March 24). On Wednesday (March 25), the Lockheed EP-3E reconnaissance aircraft operated by the United States Navy passed close by Taiwan’s southwest coast, while on Thursday (March 26), the USS McCampbell (DDG 85), a guided-missile destroyer, passed through the Taiwan Strait. Tank concealed in an overgrown area behind a building. (MNA photo)