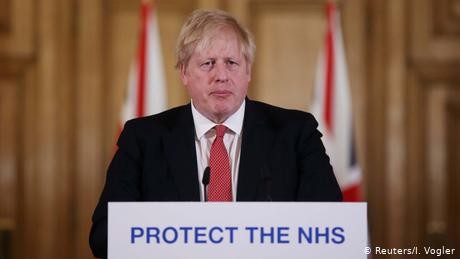 We've known for quite some time, that Boris Johnson is prone to illusions of grandeur. He has modeled himself on and aspired to be like one of his more illustrious predecessors, Winston Churchill. All told, that hasn't been going too well for him.

Whereas the UK's wartime prime minister took a crisis head-on with a coherent strategy, Johnson's timorous response to tackling the coronavirus pandemic has veered from procrastination to invoking a take-it-on-the-chin spirit to looking like a rabbit caught in the headlights.

Somewhat ironically, Johnson is now emulating the measures that many of those "pariah" EU countries imposed days, if not weeks, ago.

Read more: Coronavirus: What are the lockdown measures across Europe?

And you really couldn't make it up: Those people who wanted an end to free movement are now complaining about, er, not having freedom of movement.

Belatedly, Johnson has woken from his slumber and acknowledged the gravity of the situation. Only recently he had stressed that there was no point in taking stronger measures, as the virus wasn't yet spreading rapidly. That's a bit like saying no need to evacuate just yet, because only the living room is on fire. We'll wait until the entire house is ablaze.

Guidance and clear messages is what the public needs in these times. Johnson has failed to provide either. He never misses an opportunity to boast about his Literae Humaniores studies (Classics, ancient literature and classical philosophy) - but that's exactly the problem. Going off-script, and bandying about obscure words and incomprehensible terms when clarity and conciseness are of the essence highlight the extent to which he is out of his depth.

The coronavirus can't be swept away by bluster and jokes. Artifice and political gamesmanship have no place in these troubled times. Charisma and appeal are welcome traits in a politician. Johnson's followers would argue he has those attributes in spades. If only he knew how to put them to good use and provide a compass to navigate the UK through this storm.

Then again, perhaps we should not be surprised by his solecism. His gaffe-prone ineptitude runs like a common thread through his political career. A prime minister who is arguably facing the biggest crisis of his tenure, whose legacy will be defined by it, is the same man who made a fool of himself getting stuck on a zip wire, dangling over Victoria Park in London clutching two plastic Union Jack flags during the 2012 Olympics.

His time as foreign secretary was marked by a series of lapses and diplomatic blunders: He compared then French President Francois Hollande's attitude to Brexit with a prisoner of war camp. He joked that business was prevented from investing in Libya by the dead bodies. He recounted a colonial-era poem while visiting a Burmese temple.

Would you trust a prime minister to tackle a crisis of this magnitude who, while brandishing a smoked herring, claimed that EU food safety regulations were costing the UK dearly (the infamous kipper calamity), when in fact those rules were set by the UK?

Or who conjured up a plan to spend £20 billion (€22 billion, $23 billion) on a bridge connecting Scotland with Northern Ireland? Just to put that into perspective: The government has allocated £5 billion in emergency coronavirus funds to the National Health Service (NHS).

In his infinite wisdom, Johnson has designated responsibilities to Foreign Secretary Dominic Raab — in case the prime minister is struck down with the virus. A quick reminder: Raab suggested recently that the pandemic strengthens the case for completing Brexit by December 31 and rejected calls to extend the transition period.

History will be the judge

Johnson's equivocation could cost the UK dearly. Doctors and nurses have threatened to quit the NHS over a lack of personal protective equipment. Nurses could be forced to decide between their jobs and their safety.

Quite apart from the terrible loss of lives, this crisis will leave an indelible mark on UK society and its psyche. It will define livelihoods and political legacies.

I'll leave you with this pithy blast from the past:

"On hearing ill rumor that Londoners may soon be urged into their lodgings … I looked upon the street to see a gaggle of striplings making fair merry, and no doubt spreading the plague well about. Not a care had these rogues for the health of their elders." (Samuel Pepys, 1664)