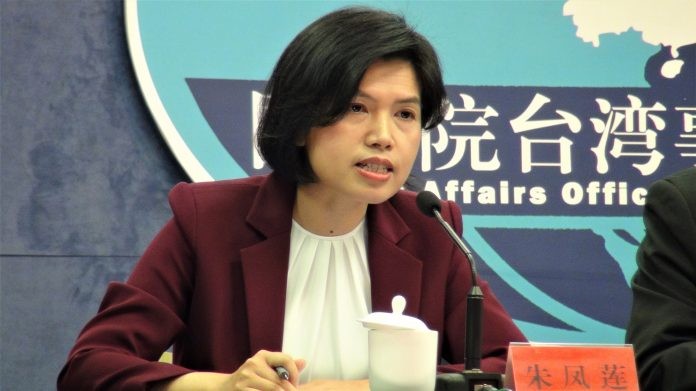 TAIPEI (Taiwan News) — In response to a joint agreement under which Taiwan will donate 100,000 face masks per week to the U.S, China's Taiwan Affairs Office (TAO) on Tuesday (March 24) said that such a plan is tantamount to "confronting the Motherland."

On March 18, Taiwan's Foreign Minister Joseph Wu (吳釗燮) announced a Taiwan-U.S. joint statement in which the two countries agreed to step up their cooperation on the development of drugs and vaccines to battle the Wuhan coronavirus (COVID-19). In addition, Taiwan pledged to donate 100,000 face masks per week to the U.S., while the U.S. is reserving materials for 300,000 hazmat suits for Taiwan.

In response, China's state-run mouthpiece Xinhua News on March 19 published an editorial in which it criticized the joint declaration, saying that "[Taiwan's] Democratic Progressive Party authorities hate China and fawn over the U.S. and have come out with a new trick." The article then singled out Foreign Minister Joseph Wu (吳釗燮) for allegedly continuing to use discriminatory words to spread the "political virus" to attack China.

When asked about the Xinhua article during a press conference that day, Wu said that his job is to promote friendship between Taiwan and other countries, not to "flatter China."

Six days after the joint statement was announced, TAO spokeswoman Zhu Fenglian (朱鳳蓮) on Tuesday (March 24) described the joint statement as "despicable behavior" on the part of the Democratic Progressive Party (DPP) intended to "seek independence." She characterized the cooperation between the two nations as "kidnapping the health and well-being of the people of Taiwan" and claimed that it was provoking a "confrontation with the Motherland."

Zhu then alleged that the DPP was using the statement as a ploy to gain "Taiwan independence" and play the "Taiwan card." She closed by demanding that the U.S. adhere to the "one China principle" and said that China opposes any formal exchanges between the U.S. and Taiwan.

Zhu's full statement can be seen below:

"The so-called 'joint statment issued by Taiwan and the United States and Taiwan once again exposed the despicable behavior and political plot of Democratic Progressive Party authorities to use the novel coronavirus epidemic to seek independence. It is kidnapping the health and well-being of the people of Taiwan and taking the wrong path of 'worshipping everything foreign' and engaging in a confrontation with the Motherland."

"We support the international community's joint efforts and strengthen cooperation to overcome the epidemic, but we are firmly opposed to taking the opportunity to engage in" Taiwan independence "or playing 'the Taiwan card," to pull some tricks. The relationship between Taiwan and the United States must be handled under the 'one China principle.' We firmly oppose any form of official exchanges between Taiwan and the United States."