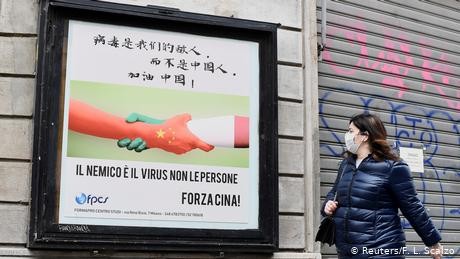 The spokesman for the Italian Red Cross, Marcello de Angelis, told DW that the Chinese experts have "gained a great deal of experience that Italy urgently needs." Last week, the number of COVID-19 fatalities in Italy surpassed that of China.

"China has had considerable success in fighting the epidemic, and we want to work with Chinese experts on an international level," said de Angelis, adding that the Italian and Chinese Red Cross organizations have a long history of cooperation.

The first team from China arrived on March 12 in Rome with 31 tons of essential supplies and equipment, including respirators, protective suits, masks and medications. The supplies were donated both by the Chinese government and private donors. Another Chinese team flew directly to Milan on March 18.

"There are still people who would like to help Italy," said Foreign Minister Luigi Di Maio.

The Europeans provided assistance to the Chinese during the height of the coronavirus outbreak in China, with several EU countries shipping 56 tons of essential equipment.

Thorsten Benner, director of the Global Public Policy Institute (GPPI) in Berlin, said that China is in a good position to help others now that the worst of the coronavirus epidemic in the country appears to be over.

"There is now a lot of extra capacity there available for the rest of the world," said Benner, adding that China also has an obligation to help. "A lot of the blame for the coronavirus spreading with such force can be laid at the feet of the Chinese government," Brenner told DW.

However, there are also concerns among China observers that Beijing now has an opportunity to drive a wedge into the European Union.

According to Germany's Frankfurter Allgemeine newspaper, Chinese President Xi Jinping said in a telephone call with Italian Premier Giuseppe Conte that Italy and China were the "cornerstones of a New Silk Road of health."

Benner from GPPI said that it is normal for China to pursue its geopolitical goals in providing aid, and other countries would do the same. However, Benner added that he is concerned that European's are lacking solidarity in the current crisis.

Over the past several weeks, Foreign Minister Di Maio has pointed out that despite "cries for help" from Rome, Italy's European neighbors have not offered the same level of assistance as China.

And there were reports in Italian media two weeks ago that a shipment of over 800,000 surgical masks en route from China to Italy was stopped in Germany due to a ban imposed by German authorities on exporting essential medical goods used in the fight against COVID-19.

Although the export ban does not apply to goods in transit, it managed to stop critical aid from reaching Italian medics.

Even after diplomacy prevailed and the delivery was allowed to go through, the masks have apparently disappeared while in Germany, according to the Italian regional newspaper Il Giorno, quoting the Italian company that imported the masks.

The mass circulation daily "Corriere della Sera" reported that in the past several weeks, the delivery of more than 190 million protective face masks to Italy has been blocked by the country's neighbors.

German analyst Benner said that the crisis has damaged the image and credibility of the EU and Germany as guarantors of European solidarity.

"The EU has not succeeded in effectively helping Italy, which is the country most affected by the pandemic in Europe," said Benner. "Many Italians must have developed a very bad impression by now. Although many in Germany talk about a 'common European fate,' when fate strikes a blow, it looks more like we are not helping our neighbors."

In the meantime, although Germany has relaxed the medical export ban on other EU countries, and critical aid like respirators has arrived in Italy, a negative impression among Italians has most certainly taken hold.

"The decision from Berlin came too late, and the sentiment in Italy is now extremely negative," said Benner.

Chinese propaganda is also using the coronavirus crisis in Europe to its advantage, and portraying Beijing as a source of stability amid European disunion.

In recent editorial, China's state-run Xinhua news agency wrote that "if handshakes do not count anymore in Europe, China's helping hand could make a difference."

However, these tactics from Beijing do not come as a surprise to European leaders. Former German Foreign Minister Sigmar Gabriel said in 2017 that China needs to respect the policy of "one Europe" and warned Beijing against attempting to undermine European solidarity.

But the EU has issues with solidarity with or without Chinese interference. "Countries like Germany must do more to promote the idea of 'one Europe' and we still have an opportunity to show solidarity," said Benner. "It is up to us to learn from this crisis."