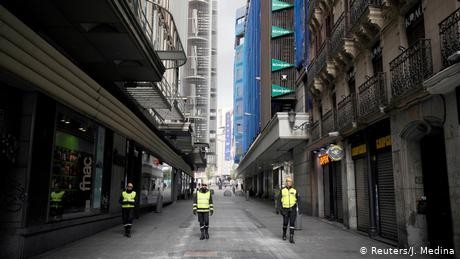 Restrictions in place until April 3, but could extend to July 31

Italy issued a nationwide lockdown on March 9, ordering its 60 million residents to stay at home. Schools, universities and all non-essential businesses are closed — with supermarkets, banks, pharmacies and post offices allowed to remain open. Travel within Italy has been banned except for health reasons or urgent matters.

People in Italy are only permitted to leave the house under certain circumstances, including: solitary exercise close to home, going grocery shopping or going to the doctor. They must print out a certificate at home declaring their reason for leaving the house, which will be checked by police. Those who violate the lockdown face fines between €400 to €3,000 ($430 to $3,227) or up to three months in jail.

Restrictions in place until April 11

The Spanish government declared a state of emergency on March 14, issuing a general confinement order for more than 46 million people.

Non-essential shops and schools have been ordered to shut, as well as hotels and tourist accommodation. Spain also closed its external borders with its European neighbors. People are limited to only leaving their homes to go to the pharmacy and grocery shopping. Outdoor exercise is also banned, except for taking a dog on a walk. Hundreds of thousands of police and military personnel are enforcing the lockdown.

Restrictions in place until April 1, but likely to be extended

The French government announced a strict nationwide lockdown on March 17, banning all public gatherings and telling residents to stay inside except for grocery shopping and other essential tasks.

Along with closing all non-essential shops, open-air markets have been ordered to shut. People in France are also required to fill out a form stating their reason for leaving the house.

Outdoor exercise is only permitted once a day and must be done alone and not exceed one hour. Families are allowed to take walks, but must remain within 1 kilometer (0.6 miles) of their homes. Walking the dog is allowed, although owners must now write down what time they left to make sure it's within the hour-limit.

Those breaching lockdown rules could face fines between €135 to €3,700 as well as up to six months in prison for multiple violations.

Read more: Coronavirus: No lockdowns in Sweden, for now

Restrictions in place until April 6

Unlike other European countries, Germany has so far stopped short of ordering its over 80 million population to remain at home — instead opting for strict social distancing measures which were issued on March 22.

Public gatherings of more than two people are banned, except for families and those who live together. Restaurants have been told to close unless they offer food delivery and pick-up. Hair salons and tattoo parlors have joined the list of non-essential shops that have been told to shut. Exercising alone outside is still allowed, albeit with at least a 1.5-meter distance between others.

The states of Bavaria and Saarland have, however, have put their residents on lockdown, telling them to stay at home. Schools across the country have been told to shut until the end of the Easter holiday, which ends between April 13 – April 24.

Read more: Coronavirus and the EU: The nation versus the union?

Restrictions in place until April 13, but will be reviewed

The British government ordered a lockdown on March 23, limiting people to trips outside the home solely for grocery shopping, medical needs and traveling to work if working from home is not an option.

Social gatherings and meeting up in crowds have been banned. One form of solitary exercise is permitted such as running or riding s bicycle. Police will be enforcing the lockdown measures, but people are not required to bring papers with them when they go outside to justify their reason for leaving the house.

Restrictions in place until April 13

Austria banned its nearly 9 million citizens on March 16 from entering public spaces except in certain situations, including pharmacy, grocery store and ATM trips. All sports fields have been shut, but people are still permitted to go on runs or take walks outside with the people who also live in their apartment or house.

Groups of more than five people are not permitted in public. Restaurants, bars and cafes have been ordered shut. Only supermarkets and food delivery services are available for those looking for food or groceries. Those who do not comply face fines of up to €3,600.

The borders with neighboring Italy and Switzerland have been shut, with train and air travel significantly cut back.