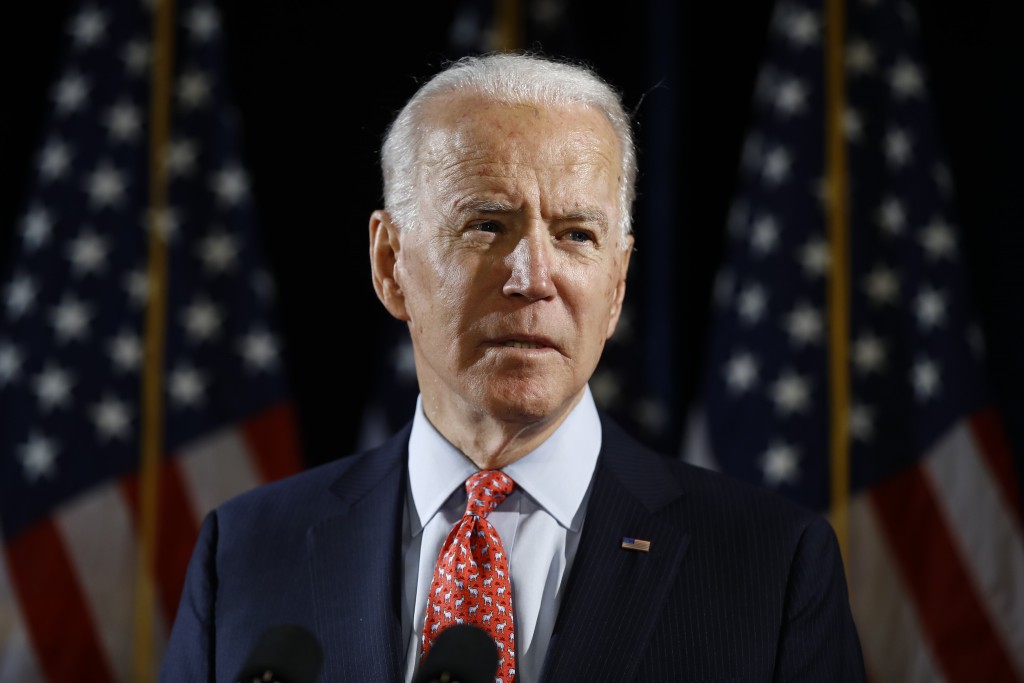 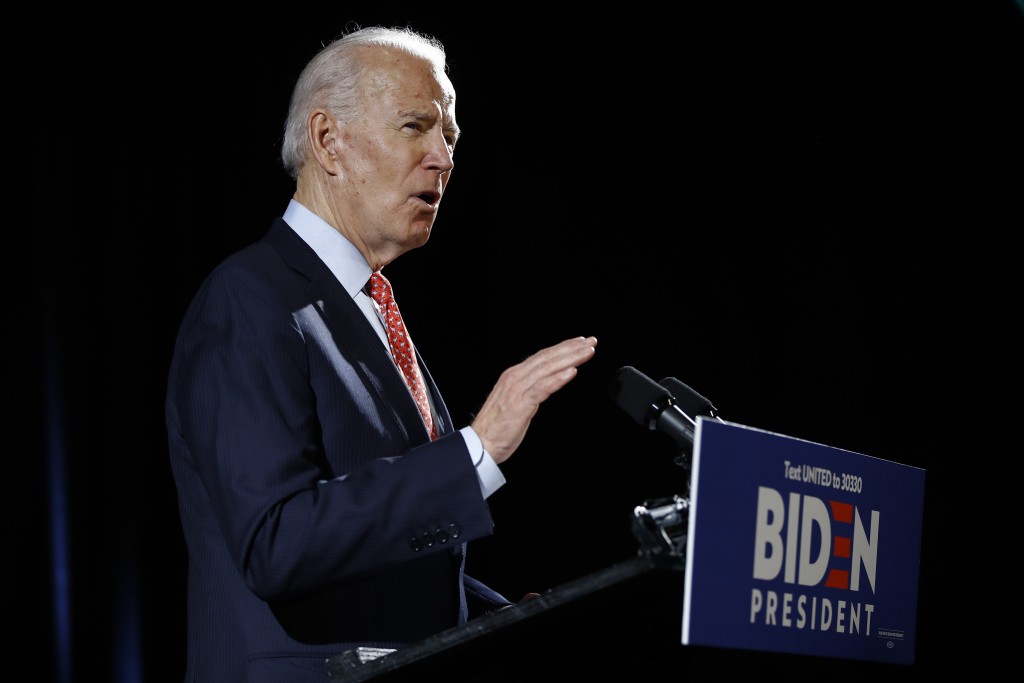 WASHINGTON (AP) — Joe Biden is working to reassert himself in national politics three weeks after taking command of the Democratic presidential primary.

Like most Americans, Biden has stayed close to home recently to prevent the spread of the coronavirus. That — and a slow shift to the new online-only reality of the campaign — has left him with a lower profile as much of the nation has focused on the pandemic and President Donald Trump's response to it.

But from a newly constructed television studio in his Wilmington, Delaware, home, Biden sat for a series of high-profile interviews on Tuesday. The appearances were a preview of a more public role he's hoping to assume in the coming weeks as he emerges as the Democratic counter to Trump.

In an interview with CNN, Biden took an increasingly aggressive stance against the president's coronavirus response, urging him to “stop talking and start listening to the medical experts.”

He sounded similar themes in an afternoon interview on MSNBC, and during an earlier appearance on ABC's “The View,” where Biden said he's trying to balance his critiques of Trump against anything that would seem to undermine the president during a crisis.

“I’ve not been criticizing the president, but I've been pointing out where there's disagreements on how to proceed,” Biden said. “When the president says things that aren't accurate, we should not say, ‘You’re lying.' We should say, 'Those aren't the facts.'”

Biden has faced growing pressure from allies to speak out more about the coronavirus. In two fundraisers this past week, supporters asked how they could see more of Biden as Trump blankets the airwaves with daily, freewheeling briefings that drive each day’s news cycle.

Trump, for his part Tuesday, summoned his favorite nickname for his likely fall opponent, dismissing any critiques from “Sleepy Joe Biden.” The former vice president laughed on CNN when shown clips of Trump's barbs. “What a piece of work,” Biden said.

Guy Cecil, chairman of Priorities USA, the major Democratic super PAC, said he’s glad to see a commitment from Biden to take on a more robust schedule of public and media appearances.

“We need to be holding this administration accountable, and there’s no way to do that if you're not speaking out,” he said.

But with the major networks focused daily on crisis and controversy, Biden’s more measured tone has sometimes struggled to break through.

On Monday, Biden broadcast an address on the outbreak, but his remarks, which came at the same time as a briefing by New York Gov. Andrew Cuomo, weren’t picked up live by any of the major networks. On Tuesday, when Biden appeared on “The View,” some stations cut away to briefings from local leaders on the virus.

Cecil acknowledged the difficulty Biden and the broader Democratic Party face getting coverage for their message and said it’s one of the reasons his group recently launched a multimillion-dollar advertising blitz around Trump’s coronavirus response.

“In order for people to break through, in order to really hold the president accountable, sometimes the best way you can do that is simply by making sure you’re on people's TV screens, and paying for it,” he said.

Further complicating Biden’s effort to mount a response is the fact that his virtual campaign remains a work in progress.

While he was delivering remarks Monday for the first time from his new at-home television studio, his telestrator appeared to malfunction or he otherwise lost his place. Biden stumbled for a few seconds and gestured to staff standing out of the frame before getting back on track with his list of suggested policy ideas to combat the pandemic.

The town halls, meanwhile, cannot fully replicate the campaign trail even when the technology goes off without a hitch. Aides tout Biden’s affinity for retail politics and his personal connections in one-on-ones, and they say they’re trying to find ways to bring that out. But they also agree that a call-in session is not the same as asking a would-be president a question in person or standing on the rope line and sharing a personal moment after an event.

Another challenge for Biden: remaining relevant and engaged in the conversation and response from a notably peripheral position as the likely-but-not-quite-official nominee of the Democratic Party, and one who is no longer serving in public office.

While Bernie Sanders’ path to the Democratic presidential nomination is increasingly mathematically improbable, the Vermont senator has yet to exit the race and has done his own online events and media appearances emphasizing his efforts in the Senate to respond to the virus.

Sanders' campaign announced that millions watched a series of virtual town halls he’s held in recent days with musical acts and high-profile supporters, including New York Rep. Alexandria Ocasio-Cortez. The senator also urged his army of online donors nationwide to forgo giving to his campaign and instead donate to five charities he said were on the front lines of the response to the virus. He later announced the effort had raised more than $2 million for the groups, which included Meals on Wheels.

Sanders was criticized in the conservative media for staying in Vermont on Sunday night to make an online appearance with Ocasio-Cortez rather than being in the Senate for key procedural votes on the virus response package.

He was in the Senate on Monday, and, rather than addressing supporters online, he appeared on MSNBC, conceding that a 2020 race upended by the coronavirus meant “we are in a bizarre moment.”

Biden, meanwhile, has mentioned that he’s in contact with Democratic elected officials, including House Speaker Nancy Pelosi, Senate Minority Leader Chuck Schumer and Washington Gov. Jay Inslee, whose state is a coronavirus hotspot. But Biden has not tipped his hand on whether he’s tried to shape the Democratic response or negotiations on Capitol Hill or whether he’s simply seeking briefings so he’s up to speed on how his party is trying to wield power.

He also said Tuesday that he receives daily briefings from public health experts and his economic team, offering a sort of model for what a Biden presidency might look like in a crisis such as this one.

On balance, Biden aides say, the pandemic and grounded campaign don’t change Biden’s core message — that Trump isn’t up to the job and that Biden’s experience proves he is. That was the thrust of Biden’s foreign policy speech last summer: “The world’s democracies look to America to stand for the values that unite us. … Donald Trump seems to be on the other team.”

It was his message again Monday in talking about Trump’s response to COVID-19: “Donald Trump is not to blame for the coronavirus. But he does bear responsibility for our response.”

For the campaign, it’s simply a matter of how to get that message to voters — and how to grab media attention for a platform the campaign doesn’t have to pay for.

As for the candidate, he seems content to project confidence that political considerations will work themselves out.

“My whole focus has basically been how we deal with this crisis,” Biden said Friday. “Quite frankly, thus far it’s been less about how we campaign or make stark differences between the president and I. I think some are just self-evident.”

Associated Press writer Will Weissert in Washington contributed to this report.