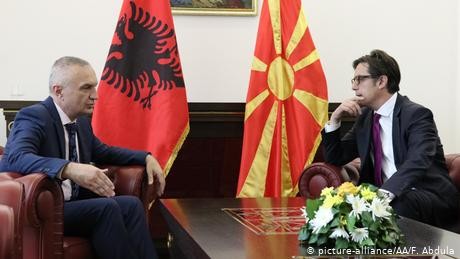 After the painful rejection of last October, and prior vetoes, it was a bit risky for Deputy Prime Minister for European Affairs Bujar Osmani to announce last week that the European Union would approve opening membership negotiations with his government, days before EU ministers even met.

But Osmani, who headed up the delegation for negotiations with Brussels, was sure this time. "I want to inform you about extremely positive news that arrived late last night from Brussels," he said last Thursday in live-streamed remarks.

He shared reports that EU ambassadors had "reached a consensus about a decision to start the accession negotiations with Republic of North Macedonia, unconditionally."

Congratulations started coming in, such as this one from Behgjet Pacolli, a former president of Kosovo, a day before ministers from the 27 member countries had even held their video conference to finalize the decision.

But this time it was finally true. European Affairs ministers, meeting Tuesday via video conference due to COVID-19, have given their blessing to opening membership negotiations with North Macedonia and Albania. While the decision requires a formal endorsement from EU leaders - and that's where things got hung up last October - the political "deal" is done.

Osmani, who is also vice-president of North Macedonia's co-ruling ethnic Albanian party, the Democratic Union for Integration, had been carefully tending public opinion ahead of this latest test for his country. He told DW in late February that the government was not going to raise expectations this time because the "higher we raise the expectation, the higher the frustration of our people" if another rejection happened. He said the EU itself considered the delay an "historic mistake" that he expected to be rectified.

Former Prime Minister Zoran Zaev resigned in January and called for early election to take responsibility for the failure, leaving the government in the hands of the caretaker administration in which Osmani serves. That vote has now been postponed due to the coronavirus outbreak.

While the EU's decision is something to celebrate, full membership is still many years away and by no means guaranteed. Nikica Mojsoska-Blazevski, Chief Executive Officer of Macedonia2025, a non-profit dedicated to accelerating the country's economic and leadership development, warns that this step merely opens a new phase in the country's evolution and is not an end in itself.

An economist, who once worked in her country's ministry of finance, Mojsoska-Blazevski told DW she's concerned too many people believe now that Skopje will get a date to begin negotiations,"the next day...investors or investments start flowing in and everything will be great."

She hopes the government will now focus on finding consensus in Macedonian society about what its shared goals are and how it's going to achieve a better standard of living for everyone. "It's not just pure economics, it's much more than that," she said. "We want to be a developed society. We want to have less corruption. We want to have rule of law, democracy."

Next door in Albania, citizens will also be buckling up for the next phase. Laura Topciu is a 30-year-old nursing student-turned-travel agent who follows politics so closely that the October rejection felt like a personal blow. "I cried," she said, shaking her head. "It hurt. And I mean, I still feel bad."

Topciu said Albania has always carried a chip on its shoulder without EU acceptance. She hopes being on the track to membership will serve as sort of a national confidence-builder. "If [the EU] includes us, we will not feel this way," Topciu said. "We will start more to work for our country. When you feel included in something, that motivates you to work more and more and more."

Plan A all the way

Albania, like North Macedonia, has undertaken a series of reforms that were badly needed - regardless of its accession status.

On a wall in Besnik Leskaj's meeting room in Tirana are three plaques. They read "If the plan doesn't work, change the plan, but never the goal." The co-founder of Abkons, an international consultancy, laughs when asked about them. "The goal is EU membership and the plan is reforms," he said.

He says that even after October's setback, in a poll Albania's pro-EU sentiment remained in the high 90's. That wasn't true in North Macedonia, where views of the bloc soured somewhat.

Leskaj notes that Albania has made significant inroads in combating corruption, which ranks among the highest concerns for both the population and outside companies considering the Albanian market as a viable investment. He described a recent vetting of judges at the magistrate level in which 70% of them were kicked out of office because they could not satisfactorily explain how they accrued the money in their bank accounts.

"These reforms will create the necessary guarantees and the necessary environment for attracting more foreign investments," Leskaj told DW. He believes Albania is perfectly poised now to become a regional hub for energy, with development in renewable energy, especially hydropower. In addition, the Trans Adriatic Pipeline, currently under construction, is expected to transport natural gas from Greece through Albania and the Adriatic Sea to Italy and on to western Europe. "We have been involved in this project for the last 12 years," Leskaj said. "And I think this project will change the country's future."

A future that is now, finally, firmly in the EU.