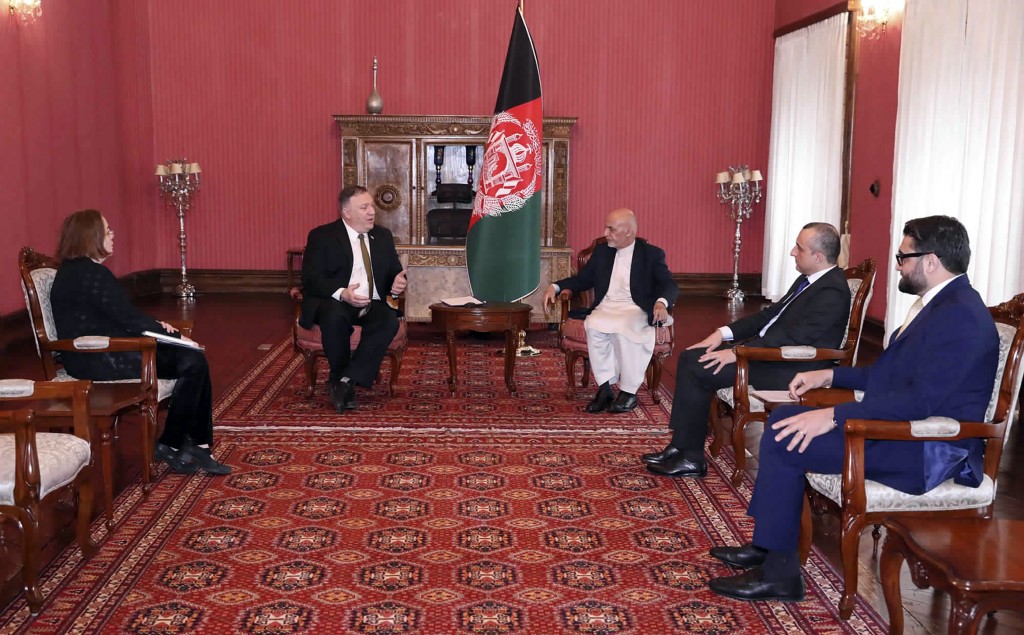 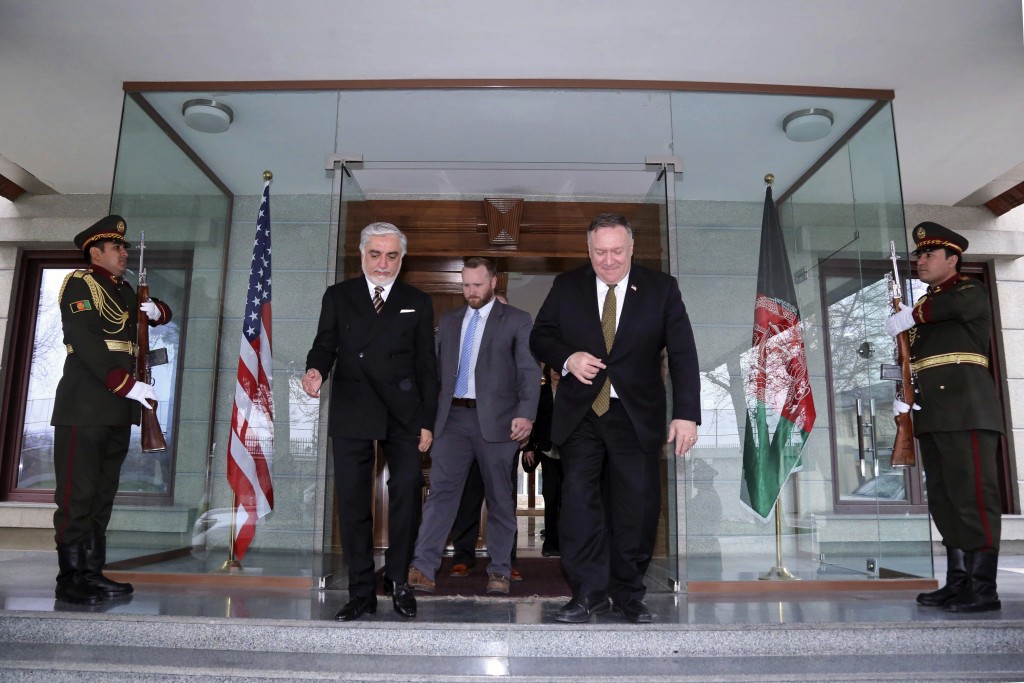 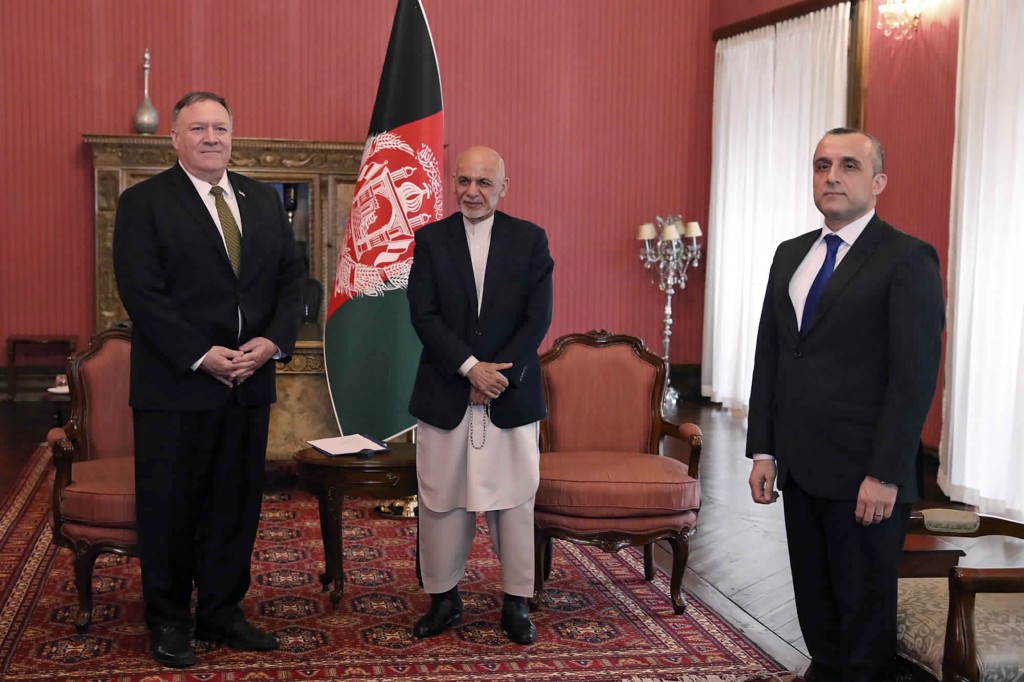 KABUL, Afghanistan (AP) — Washington's unprecedented threat to cut $1 billion in Afghanistan funding — a response to the refusal of rivals in Kabul to work together to advance peace — comes at a time when the impoverished nation risks being overwhelmed by the coronavirus pandemic.

There was no immediate response Tuesday from President Ashraf Ghani and his bitter rival, former Chief Executive Abdullah Abdullah, a day after U.S. Secretary of State Mike Pompeo called them out in a harsh statement.

Pompeo on Monday, in unannounced but urgent visit to Kabul, held inconclusive meetings with Ghani and Abdullah, then flew to the Gulf to meet with a leader of the Taliban, the Afghan insurgents who last month signed a peace deal with the U.S. as a first step toward withdrawing American troops from Afghanistan by mid-2021.

Pompeo said the Trump administration would slash $1 billion in assistance to Afghanistan and reduce all cooperation unless Ghani and Abdullah agree on forming a new government. Speaking to reporters aboard his plane on the return flight home, Pompeo said he was hopeful the two rivals “will get their act together and we won’t have to” cut the assistance. “But we’re prepared to do that,” he said.

As part of the peace deal, rival factions in Afghanistan were to come together in all-Afghan talks about shaping the country's future. However, Washington made clear from the start that pace of a U.S. troop withdrawal is linked to the Taliban clamping down on terror groups and aiding in the fight against the militant Islamic State group — not on the success of intra-Afghan talks.

A senior Afghan official familiar with Pompeo's discussions in Kabul said Monday there were no results but that efforts would continue. The official did not indicate a compromise was imminent. He spoke to The Associated Press on condition of anonymity because he wasn't authorized to speak to reporters about the talks.

Ghani and Abdullah, his main rival in last September's disputed presidential polls, have been waging a bitter power struggle that has seen both men declare themselves president in competing inauguration ceremonies earlier this month.

The offices of Ghani and Abdullah did not respond to questions Tuesday about their meetings with Pompeo and the threatened $1 billion aid cut.

After meeting the chief Taliban negotiator Mullah Abdul Ghani Baradar in Qatar, Pompeo told reporters he was satisfied the Taliban were keeping their side of the deal, had reduced violence and were ready to start negotiations with the leadership in Kabul.

In an English-language statement Tuesday, the Taliban said Baradar's meeting with Pompeo stressed that only a strict implementation of the peace deal would “pave the way for intra-Afghan negotiations along with enduring peace and cease-fire, including a future Islamic government in accordance with the agreement.”

The statement also said Pompeo assured the Taliban that the U.S. forces' withdrawal “will continue in accordance with the declared timetable.”

The squabbling in Kabul among the two Afghan rivals — both linked to powerful warlords, all with heavily armed militias — put a pall over the deal since the signing of the peace deal.

Ghani has also refused to release 5,000 Taliban prisoners the deal promised would be freed as a good-will gesture ahead of intra-Afghan talks. The Taliban for their part were to free 1,000 Afghan officials and military personnel they hold captive.

While the rest of the world struggles with the coronavirus pandemic, Afghans have vented their frustrations on social networks and local media over the government's lack of action. Afghanistan has registered only 42 cases of the virus though there are fears the true figure could be far greater after more than 137,000 Afghans returned since the start of the year from Iran, the scene of Mideast's largest outbreak. Many visited the southern Herat province and later dispersed throughout Afghanistan with no follow-up or documentation, according to officials. Iran has had more than 1,800 deaths and over 23,000 infected with the virus.

Pompeo said that despite the threatened aid cuts, Washington remained committed to the Afghan people. As a demonstration of that, he said, the U.S. would provide $15 million in assistance to help Afghanistan fight the spread of the coronavirus.