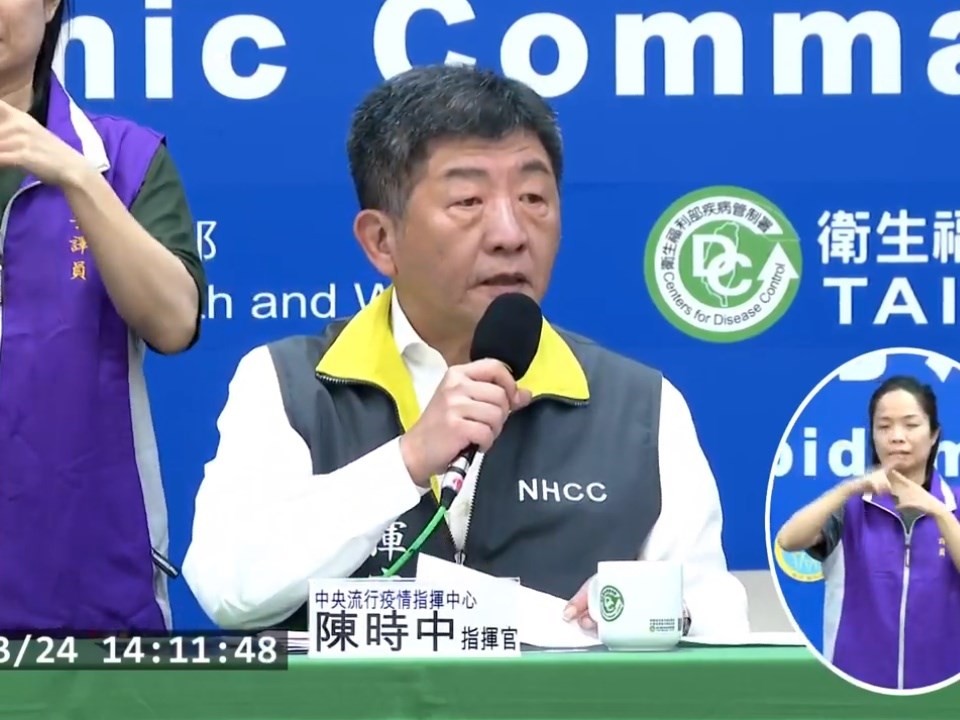 Taiwan’CECC announced on Tuesday evening (March 24) that a French man in Taiwan was confirmed to have contracted the Wuhan coronavirus, bringing the day's total to 21. The CECC said that the French national is in his 30s and is a graduate student at a university in northern Taiwan.

During a press conference on Tuesday afternoon, Health Minister and CECC head Chen Shih-chung (陳時中) confirmed 20 more cases of the disease, bringing the total to 215. All of the new cases had been imported, including seven males and 13 females, who ranged in age between five and 60.

The latest cases arrived in Taiwan between March 13 and 22 and began presenting symptoms of the disease between March 9 and 23. They traveled to the following countries before returning from Taiwan: the UK, Ireland, Italy, Turkey, Indonesia, Spain, France, the U.S., Thailand, Germany, Bulgaria, and Belgium.

Chen said that out of the 20 new cases, eight tested positive at the airport, nine while undergoing home quarantine, two while practicing self-health management, and one while in home isolation. The 197th and 202nd cases were a couple who went to the U.S. to visit relatives from March 8 to March 18.

The two fell ill on March 19 and were diagnosed on March 24. All of their contacts have been asked to undergo home quarantine.

The 213th case was a man in his 20s who had been studying abroad in Spain. On March 13, the student returned to Taiwan on the same plane as a group of tourists who had traveled to Turkey and also contracted the disease.

The student began developing symptoms on March 15 and was diagnosed on March 24. All of the persons who have come in contact with the 213th case have been told to enter home quarantine.

The remaining 17 cases were unrelated to previously reported infections. Most of them went abroad for school or work, while others did so for tourism or to visit relatives.

The youngest confirmed case on Tuesday was a five-year-old girl who had traveled to Turkey with her family. The youngest case so far is the four-year-old son of the 171st case, who traveled to the Netherlands.

Two foreign nationals were among Tuesday's cases, according to the Centers for Disease Control (CDC) website. The 196th case was an American man in his 50s who flew from the U.S. to Germany and Bulgaria on March 7.

He then took a flight to Thailand on March 11 before finally arriving in Taiwan on March 20. That same day, the man began to experience a fever, cough, and difficulty breathing, and tested positive for the disease on March 24.

The second foreigner was an Indonesian woman in her 40s who had arrived in Taiwan on March 22 to begin a work contract. That same day, she was found to have a fever at the airport and was confirmed to have the disease two days later.