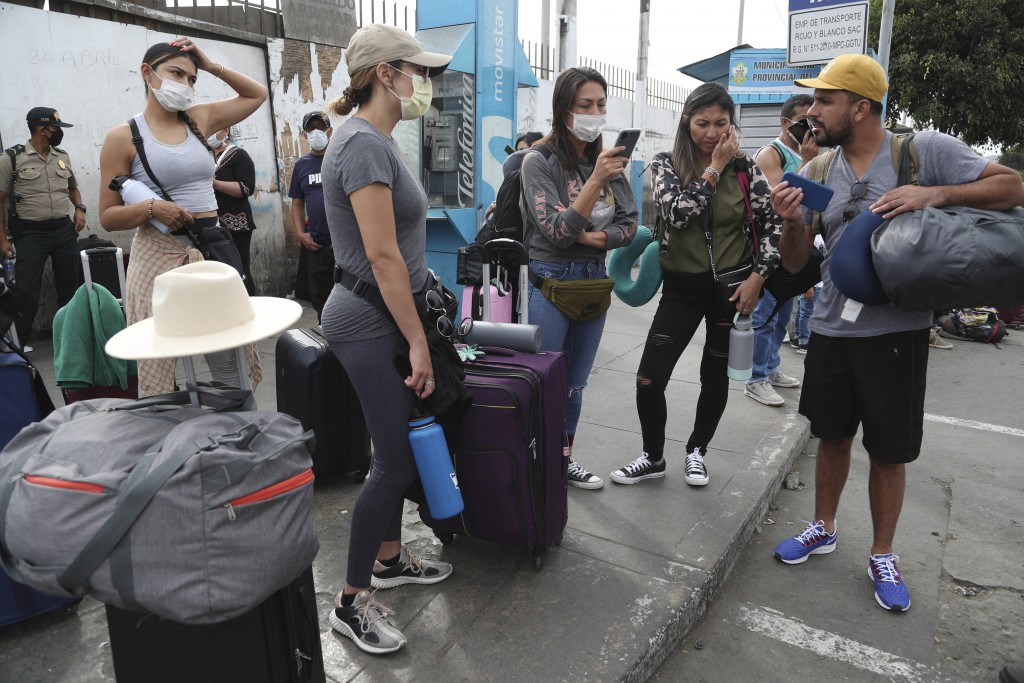 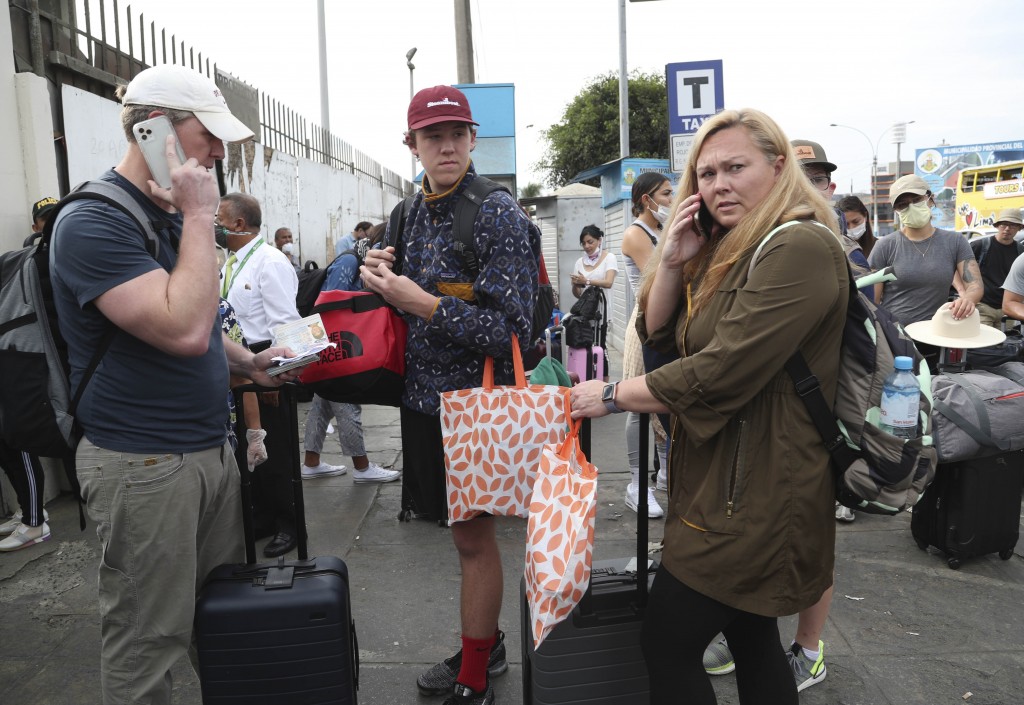 Linda Scruggs and Mike Rustici trained for months to hike the winding trails leading to Machu Picchu's complex of Inca ruins. So they were thrilled when their flight landed last Friday in the Peruvian capital.

They managed to do part of their trek but now they are trapped in a Lima hotel room and do not know when they will make it back to the U.S.. The couple, like thousands around the world, are trapped as nations closed their borders to try to stop the spread of the new coronavirus.

Peru confirmed its first case of the virus on March 6. By the time Scruggs and Rustici arrived a week later, it was already spreading. Days after the hikers landed, Peruvian President Martín Vizcarra declared an emergency, ordering the country’s borders closed and for Peruvians to stay home.

There is no official count of how many Americans or citizens of other nations are stranded outside their home countries, but the couple’s plight offers a window into the lives of tourists trapped abroad as the COVID-19 pandemic spreads.

Scruggs and Rustici, both in their 40s and from Nashville, Tennessee, told The Associated Press in telephone interviews that they were given about 24 hours notice to leave Peru, but couldn’t find a flight.

Since they couldn’t leave, they were ordered to stay in their hotel room for at least 15 days. Other than to get food or supplies on a limited basis, they can’t leave the hotel in the city's financial district.

The couple said they got little help or information from the U.S. State Department. One tourist, they said, walked to the U.S. Embassy only to be turned away and told to send an email and register for an online notification system.

Scruggs and Rustici feel like the world has closed in on them.

The virus has caused 10,000 deaths around the world, but the figure goes up every day. Americans Morocco, Ecuador and other nations also told the AP that they feel abandoned by the State Department.

They said embassies have not helped them — or even returned their phone calls and emails. When they did reach someone, they were told to check embassy websites for updates and try to charter flights out of the countries on their own.

Dora Figueiredo, 37, an American from Newark, New Jersey, was scrambling Friday to figure out whether her flight back to the U.S. from Argentina on Latam Airlines will leave as scheduled on Sunday.

She went to Buenos Aires to marry her now-new Argentine husband, who lives in Buenos Aires but cannot yet emigrate to the U.S. because he doesn’t have U.S. residency, a process she said could take more than a year.

“I’m feeling a bit stressed out about how to get home now that the Argentinian president announced a lockdown as of midnight last night,” she said. “I have been tweeting at my airline, my embassy at travel.gov about how to get back home.”

She said as of Friday her flight had not been cancelled, but she wasn’t sure if that would still be the case on Sunday and did not know how she would get to the airport.

“I really need to get home to check on my parents, who are elderly,” she said.

Catherine Ferguson, a 77-year-old artist from Omaha, Nebraska, is holed up in a hotel in Rabat, Morocco, with her husband and 10 other Americans, nearly all of them over age 60.

Ferguson and her husband were traveling for the past month with three other friends on a trip that started in France when the coronavirus cases began to increase.

Now they are trying to get permission from the Moroccan government to be allowed to charter a flight that would take them directly to the U.S.

“We really don’t want to be here when things get worse in Morocco,” Ferguson said.

Their small hotel is one of the few still open in the city, she said. The family that runs it has been feeding the 12 Americans there, and they can walk around its garden but it’s too cold to swim in the pool.

They are prohibited from leaving the hotel and have been in contact with the U.S. Consulate in Casablanca, where officials have told them they are working on a plan but so far authorities only provided names of airlines for them to call. They spend their days using their iPads trying to find flights to book.

Some of them are running low on blood pressure pills and other medication. Ferguson said Nebraska's governor and state lawmakers have been in touch, attempting to help.

U.S. Secretary of State Mike Pompeo said Friday that he is working to bring home the thousands of Americans stranded in countries around the world with little or no warning as nations closed their borders to stop the spread of the virus.

The State Department chartered evacuation flights in January to repatriate 1,100 Americans out of Wuhan, China and did the same for passengers aboard the Diamond Princess cruise ship in Japan.

The U.S. military’s Southern Command said Friday that it was flying 89 U.S. citizens from Honduras to Charleston, South Carolina, after they were unable to return home because of the virus outbreak in the second Air Force Mission to bring people from Honduras. But it’s unclear how the State Department plans to repatriate Americans stuck in other countries.

Desperate to get home from Peru, Scruggs and Rustici used social media to connect with hundreds of other tourists who were trapped in the country, trying to draw attention to their plight by reaching out to elected officials, reporters and others.

Scruggs, a nurse, said some tourists in Peru are running low on life-sustaining medications, like insulin, and some foreign college students trapped in the country were running out of money for food.

“I think everyone has been shocked at the lack of communication from the U.S.,” Scruggs said.

Friday morning, hope came in the form of an email from the office of U.S. Rep. Jim Cooper, a Republican from Tennessee, who the couple had contacted for help.

“I just received word that United (Airlines) charter flights are beginning and are going to head to Lima,” wrote Bess McWherter, who works in Cooper’s office. “The guidance I’ve received from State (Department) is that you should continuously monitor the Embassy’s website for information they post on flights. I will try to get more specific info.”

Scruggs and Rustici used a flight tracking website and found that a United Airlines Boeing 777 was traveling from Houston, Texas, to Lima on Friday. But they couldn’t find any information about whether the plane was there for them or the others. Some disillusioned tourists discussed “storming the airport,” Scruggs said.

In a statement to AP, Cooper said his office is in touch with “Tennesseans who are stuck overseas in Peru and a dozen other countries” and is working with the State Department to help get them home.

When the flight arrived at 3:37 p.m., there was a group of about 50 people outside the airport, including a number of Americans. They were not allowed inside. A few hours later, the plane departed for Washington D.C. It’s unclear how many Americans — if any — were on the flight.

The State Department and United Airlines did not respond to messages seeking comment. But Scruggs, Rustici and others in Peru said they were disappointed.

For now, they’re still stuck in their hotel room, wondering how long they’ll stay in Peru. They managed to start their Machu Picchu trek amid the virus chaos, but never made it to the top to see the ruins.

“We are desperate to get home to,” Rustici said. “And Linda’s mother is on lockdown in a nursing home and Linda is her primary caregiver. Absolutely, our lives are completely on hold.”