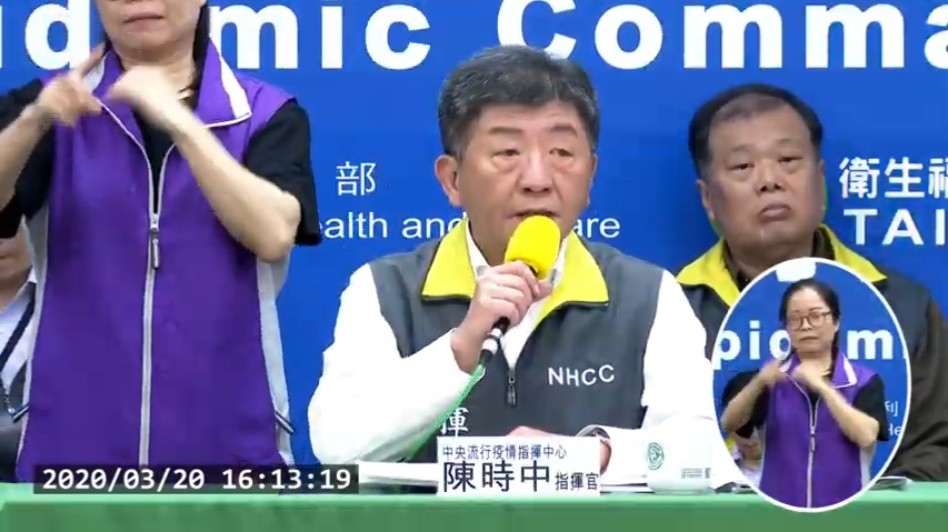 During a press conference on Thursday afternoon, Health Minister and CECC head Chen Shih-chung (陳時中) announced that 24 of the new cases had traveled to Asia, Europe, or the U.S. and that three had contracted the disease in Taiwan, while there was one new death from the disease. This represents the country's largest single-day increase since the start of the outbreak, bringing the total to 135 and the second death since the outbreak began.

Chen said that 15 of the latest imported cases were women, while nine were males between the ages of 10 and 80. They had entered the country between March 6 and March 18 and the dates of the onset of the disease ranged from March 5 to March 18.

The 111th case was a member of the Egyptian tour group that has already seen a number of other infections. The individual became ill on March 15 and tested positive for the disease on Friday, bringing the total number of confirmed cases as a result of the ill-fated trip to six (five participants and one person who came into contact with them).

Among the cases coming from the U.S., two were friends who traveled together, the 118th case and 121st case. The two traveled to the U.S. on March 5, returned on March 16, and both became ill and tested positive for the disease on March 18.

The two were found to have attended the same event as the 85th case. Thus three persons at that gathering in the U.S. have contracted the disease.

The 122nd case is yet another member of the tour group to Turkey, a country that has reported a suspiciously low number of confirmed cases. The addition of the 122nd case means that 14 people have so far been infected from the trip to Turkey, including one person that came into contact with the travelers upon their return.

On March 12 and 13, the man was in contact with his manager, who had just returned from the U.S. and had shown symptoms since March 14. The man fell ill on March 17, sought medical treatment on March 18, and tested positive on March 20.

In addition, two foreign colleagues of the man also began to develop symptoms of the virus on March 17 and March 18, but have yet to be confirmed with the disease. The CECC will carry out further screening and an investigation to identify the source of the infections.

The 130th case is a female classmate of the 59th case, a teenage boy from northern Taiwan who traveled to Greece with his family in January and returned to the island on March 5. She began to feel ill on March 17 and was diagnosed on March 20, marking the third confirmed case from the boy's high school, which halted classes on Thursday (March 19).

In a bit of good news, Chen Shih-chung announced that two more individuals had been released from hospital quarantine, raising the total number of released patients up to 28.