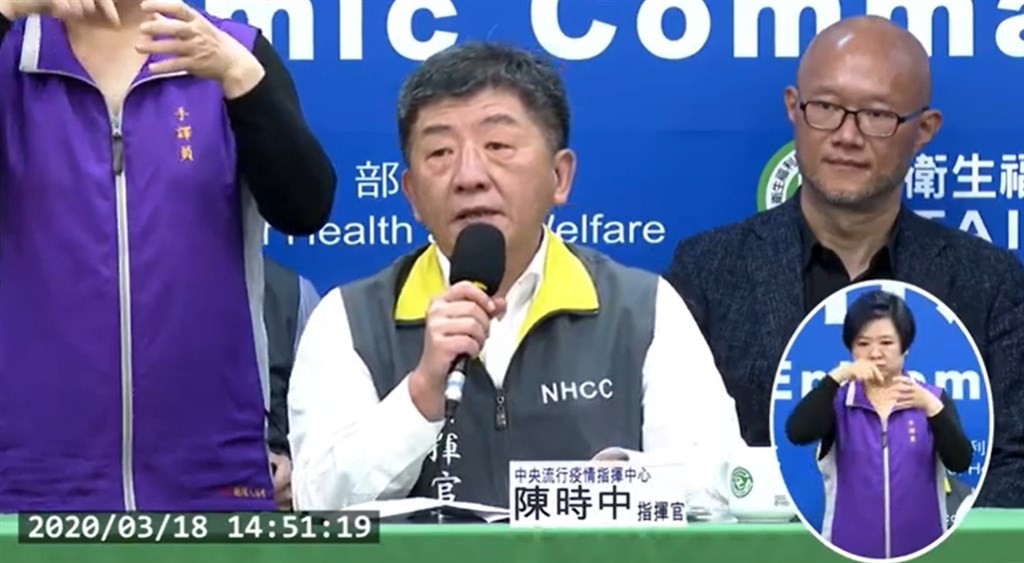 During a press conference on Wednesday afternoon, Health Minister and CECC head Chen Shih-chung (陳時中) announced that 21 of the new cases had traveled to Asia, Europe, or the U.S. and that two had contracted the disease in Taiwan. One of the domestic cases had no recent history of travel.

Chen said that half of the 22 new cases had just returned from Asia, Europe, or the U.S. and half were individuals who had recently traveled on those continents and who had already entered Taiwan. However, Chen said that one woman in her 20s, who sought treatment on March 12 and had no history of recent travel, was the most worrying, as they do not know how she contracted the disease.

He said that the other domestic case, a man in his 20s, is the son of a previously confirmed case who had participated in a tour in Egypt. Among the imported cases, 11 were intercepted upon arrival at the airport.

Out of a 15-person tour group that traveled to Turkey, four more were diagnosed with the disease, bringing the total number of infected to 13 and the number of people they have come into contact with to 171. He said that five of the cases had been undergoing quarantine after contact with confirmed patients, one was under home quarantine, and three had limited contact with the public.

The 99th case was a student who attended the same school in Spain as the 64th and 58th cases and had already been undergoing quarantine. The 79th case was taken back from the airport by a private driver and admitted to the hospital three days later.

The 84th case had returned home from the U.S. and gone to a hospital to undergo screening Monday and Tuesday (March 16 and 17). Chen then listed three cases of particular concern.

In addition to the woman whose source of infection is unknown, Chen said that the 84th case was a French national who arrived on March 12 and traveled across Taiwan with his local friends until he developed symptoms. He was tested and quarantined on March 16, reported Heho.

The 95th case arrived from the Indonesian island of Bali on March 12 but was not diagnosed until March 16, also after having potentially exposed others to the disease over the course of four days.

Taiwan's Centers for Disease Control (CDC) reported that out of the 23 new cases, 14 were women and nine were men. He said that the 21 imported cases ranged in age between 20 and 50, while the two domestic cases were in their 20s.

The breakdown of countries visited by the 21 imported cases is as follows: Turkey 4, Spain 3, U.S. 3, UK 2, France 2, Indonesia 1, Qatar 1, the Philippines 1, Switzerland 1, and Germany 1. In addition, one case had been to France, Spain, and the UK, while another had traveled in the UK, Italy, and France.