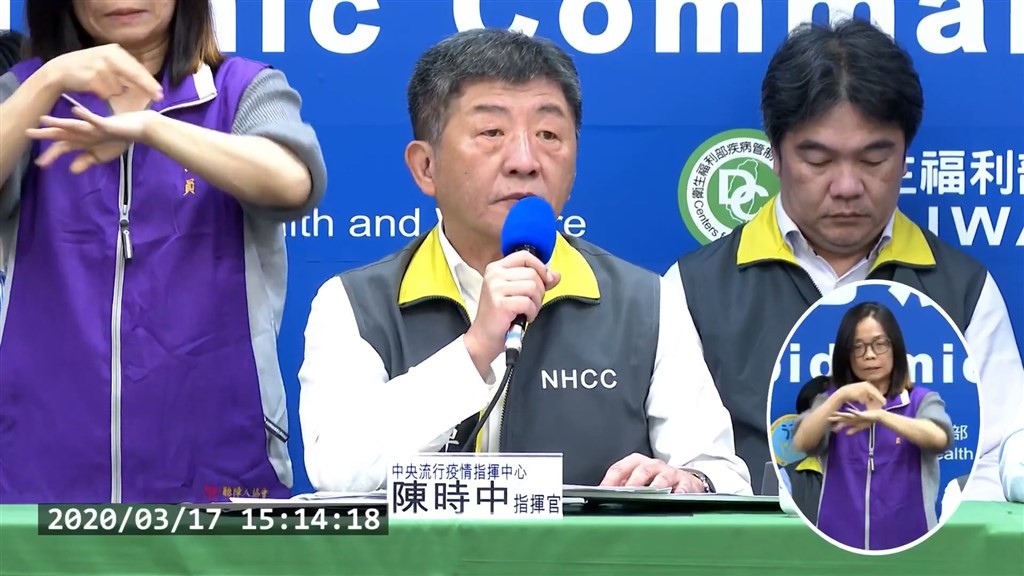 Health Minister and CECC head Chen Shih-chung (陳時中) on Tuesday announced that the 10 new cases had all contracted the disease while traveling abroad. Chen said that cases 68, 69, 70, and 73 had been part of the tour of Turkey that cases 56, 57, 65, 66, and 67 had been on, bringing the total number of those infected from the trip to nine.

He said that these cases include two women and two men between the ages of 20 and 60 and that two of them are from northern Taiwan, while two are from the central part of the country. The tour lasted from March 7 to March 14.

Given that nine out of 15 who went on the trip to Turkey have contracted the disease, Chen pointed out that this shows the risk of infection in Turkey is quite high. As for the 71st case, he said that he is a 60-year-old man who was on the same tour group to Egypt as the 55th and 63rd cases.

The 72nd case is a woman in her 70s who was on the same trip to the Czech Republic and Austria as the 61st case, who Chen said is her daughter.

Chen then outlined four cases who had contracted the disease from previously unreported trips. The 74th case is a man in his 30s from southern Taiwan who traveled with seven relatives and friends to Iceland.

Lastly, the 77th case is a woman in her 60s from northern Taiwan. On Jan. 20 she took a flight from Taiwan to the Czech Republic with a transfer in Dubai.

On March 7, she flew to New York to visit relatives and returned to Taiwan on March 16. She developed a fever and diarrhea in New York on March 10 and sought medical treatment on March 14.

When she arrived in Taiwan on March 16, she was immediately hospitalized, as she was complaining of an itchy throat and cough, and was officially diagnosed on March 17. The CECC is currently investigating those she came in contact with, including passengers on her flight back.