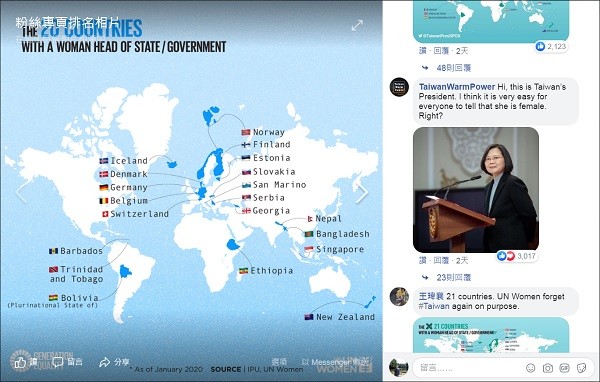 TAIPEI (Taiwan News) — Taiwanese netizens blasted UN Women for its exclusion of Taiwan president Tsai Ing-wen (蔡英文) from its female heads of state count on a map that presents information on women in executive and parliamentary positions as of Jan. 1, 2020.

A UN Women’s Facebook post showing the female heads of state count was inundated with protests from Taiwanese users, with one saying “Tsai has the wisdom, courage, and bravery to say #No to our neighboring dictatorship, China. Don't you think Dr. Tsai Ing-wen deserves to be acknowledged as a role model for many women in the world?”

Another Facebook user said, “An international organization that is supposedly dedicated to the empowerment of women has just rudely overlooked, or refused to recognize, the legitimacy of a female national leader who has been leading Taiwan for the past four years and was reelected. How respectful.”

“These days international organizations are a joke! Just look at the WHO!” said another.

"'Empower women around the world?' If UN Women really means it, please be brave and include President Tsai Ing-wen of #Taiwan on this map! Stop disappointing more than 10,000,000 females in Taiwan!" said another.

"So this is how UN Women cares about the rights of women participating in politics — by neglecting the fact that we have such a powerful female leader in Taiwan. Just like the WHO doesn’t care about public health but only flatters the Chinese government. Well done!" another reaction read.

Another netizen posted a photo of Tsai Ing-wen and captioned it, “Hi, this is Taiwan’s President. I think it is very easy for everyone to tell that she is female. Right?”