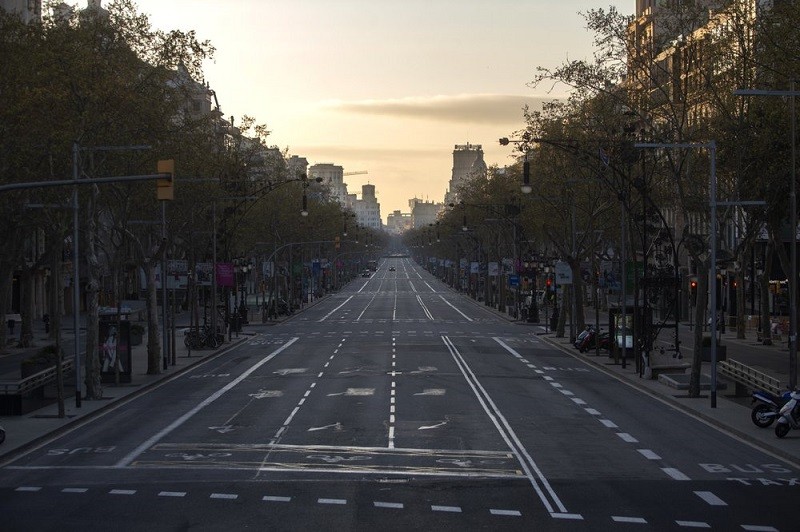 BARCELONA, Spain (AP) — A new round of restrictions and border closures was announced in Europe and beyond on Sunday as public life and travel increasingly ground to a halt and even worship was disrupted amid efforts to keep people apart and slow the spread of the new coronavirus.

Spain awoke to the first day of a nationwide quarantine. Austria’s chancellor, Sebastian Kurz, said his government was limiting people’s movement nationwide, shortly after the country’s Tyrol province followed Italy and Spain in barring people from leaving their homes except for essential errands and work. Europe is currently the main front line of the fight against COVID-19.

Other than essential errands, people should go out “only alone or with the people with whom (they) live in their apartment,” Kurz, whose country has confirmed 800 infections, told the Austria Press Agency. Neighboring Slovenia said it would shut down all public transport starting Monday and planned to shut all but food shops and pharmacies.

MORE ON THE VIRUS OUTBREAK:

Estonia and Latvia said they would close their borders to foreign nationals, except residents, from Tuesday. Turkey put aside quarantine beds for more than 10,000 people returning from pilgrimage to Islam’s holy sites in Saudi Arabia.

Italy, the worst-hit European country with more than 21,000 infections and 1,400 deaths, ratcheted its nearly week-old lockdown still tighter. The transport ministry banned passengers from taking ferries to the island of Sardinia, and also banned overnight train trips — which many in the worst-affected north had been taking to reach homes and families in the south.

Spain joined Italy on lockdown after the government declared a two-week state of emergency.

In Barcelona, people who ventured out on quiet streets to buy bread at one bakery formed long lines with a meter (about three feet) between each person as recommended by authorities to reduce the risk of contagion. Police patrolled parks and told people who were not taking their dog on a quick walk to go home.

A police patrol car cruised Barcelona’s streets slowly a with loudspeaker blasting a recorded message that people should respect the restrictions on movement.

The state of emergency “is necessary to unify our efforts so we can all go in the same direction,” Barcelona Mayor Ada Colau said on Sunday. “If we show solidarity and think about one another we can get through this. Other countries have, and it is in our hands to give our best answer to this huge challenge.”

Spain’s government said late Saturday that Prime Minister Pedro Sánchez’s wife had tested positive for the coronavirus. Begoña Gómez and the prime minister are in good health, the government said.

There were tough steps in Southeast Asia too: soldiers and police sealed the densely populated Philippine capital, Manila, from most domestic travellers in one of the region’s most drastic containment measures. In Indonesia, the world’s most populous Muslim nation, President Joko Widodo asked all people to work, study and worship from home.

Travellers scrambling to return to the U.S. after the Trump administration imposed a wide-ranging ban on people entering from Europe faced hours-long waits for required medical screenings.

Videos and photos posted on social media showed packed, winding lines of returning travelers. On Twitter, airports like Dallas/Fort Worth and Chicago O’Hare acknowledged the delays and asked for patience.

In China, where the virus was first detected in December, those arriving on overseas flights were routed to a converted exhibition center for initial checks before being shuttled off to their homes or other quarantine locations.

It was clear, however, that the center of gravity in the crisis had shifted toward Europe and North America. The virus has infected more than 156,000 people worldwide and killed over 5,800. China, Italy, Iran, South Korea and Spain are the countries with the most cases.

For most people, the coronavirus causes only mild or moderate symptoms, such as fever and cough. For some, especially older adults and people with existing health problems, it can cause more severe illness, including pneumonia. The vast majority of people recover in a matter of weeks.

Even as social life largely halted — the German capital, Berlin, closed bars, cinemas and other facilities on Saturday evening, for example — some attempts at keeping up public life persisted.

France, which has reported 4,500 cases and 91 deaths. went ahead Sunday with nationwide elections to choose mayors and other local leaders despite a crackdown on public gatherings. The government ordered unprecedented sanitary measures at polling stations.

Organizers were under orders to allow a one-meter (about three-foot) gap between people in lines, and to provide soap or hydro-alcoholic gel and disinfectant wipes for voting machines. Voters were told to bring their own pens to sign the voting register.

The state of Bavaria in neighboring Germany, which had reported nearly 3,800 cases and eight deaths nationwide as of Saturday, also went ahead with municipal elections. Local officials said more people filed postal ballots than five yeaars earlier, while election workers used precautions such as protective gloves.

The increasing restrictions weighed on Sunday worship in Spain, where orders stipulated that a one-meter gap be kept between parishioners.

At least one church in Madrid streamed midday Mass online. The faithful were allowed in the main chapel to pray but given instructions to keep apart. Holy water bowls had been emptied, and a room for confession was prepared because ordinary confessionals would have put the priest and the faithful too close.

At the Vatican, Pope Francis for the second Sunday delivered his noon remarks and spoken blessing from inside the Apostolic Library instead of from a window overlooking St. Peter’s Square. He praised people who might risk contagion to help the poor and homeless even as fears of the virus prompt ever more countries to restrict everyday life.

With Easter less than a month away, the Vatican said Holy Week religious ceremonies — usually a string of massive public occasions that draws huge numbers of tourists and pilgrims to Rome — will go ahead, but just how hasn’t yet been decided.

Britain, which has taken a different approach and hasn’t yet restricted everyday activities, said it plans to set out emergency powers this week, including requiring elderly to self-isolate and banning mass gatherings.

“We will do the right thing at the right time,” Health Secretary Matt Hancock told the BBC. “We will publish the bill this week coming, we will change the law so that we take the power to be able to close mass gatherings if we need to.”

Other measures include potentially requiring people over 70 to self-isolate for up to four months, he said.

In the Middle East, Muslim authorities announced that Jerusalem’s Al-Aqsa mosque, Islam’s third-holiest site, would be closed indefinitely due to concerns about the outbreak, with prayers continuing to be held on the sprawling esplanade outside.

Israeli Prime Minister Benjamin Netanyahu’s trial on serious corruption charges, which was supposed to begin this week, was postponed for two months because of restrictions on public gatherings.

The U.S. has seen 60 deaths and more than 2,100 cases. In hard-hit Washington state, officials said the disease is straining the supply of protective gear available to medical providers despite shipments from the federal government.