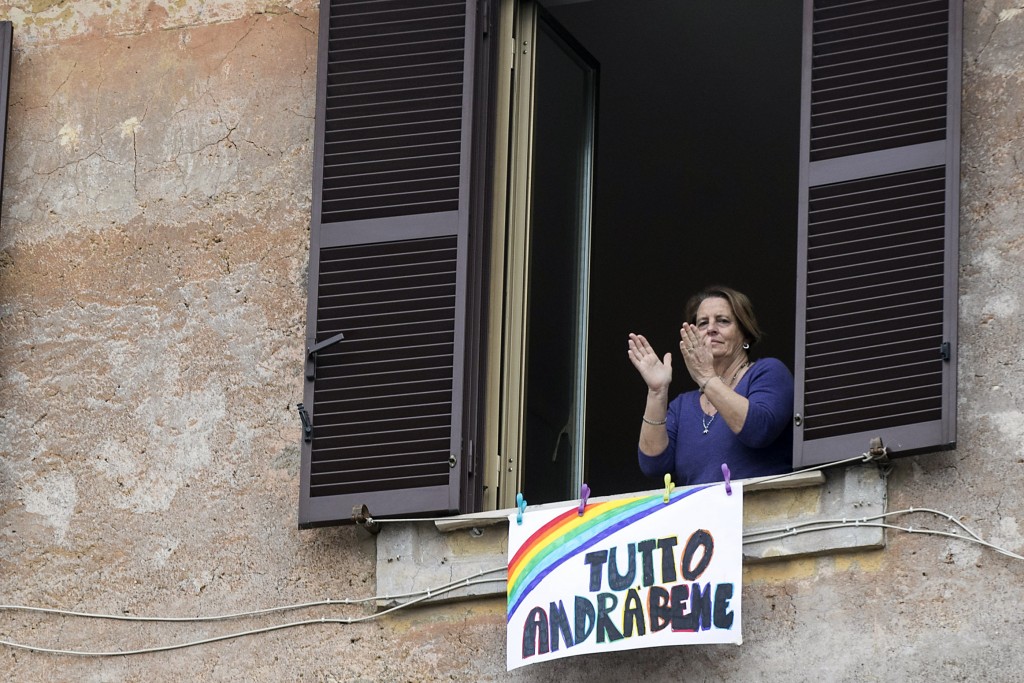 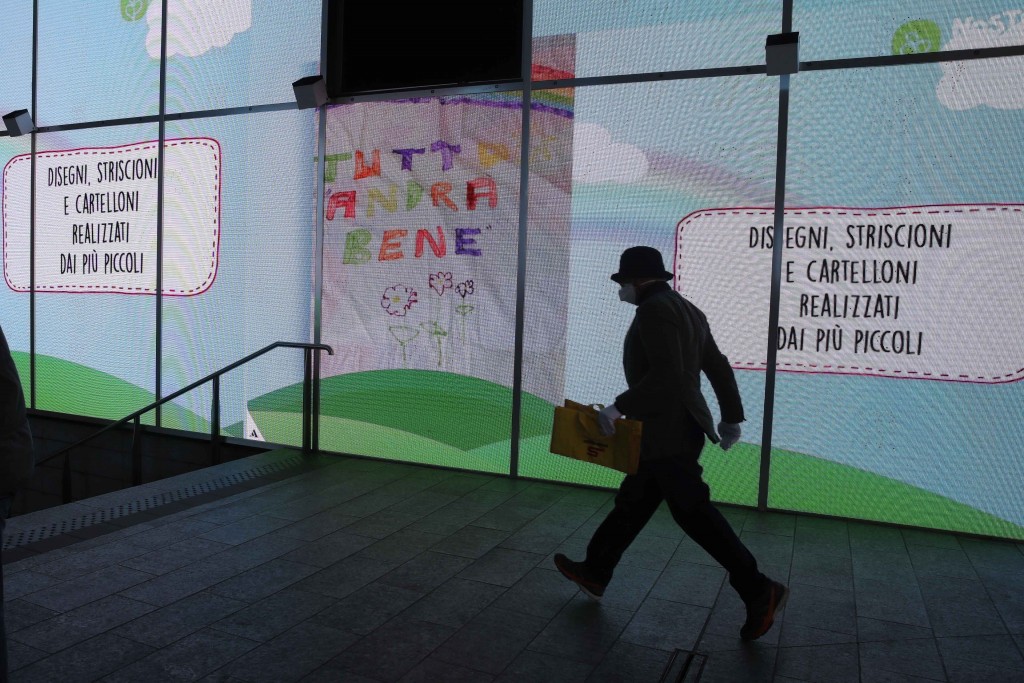 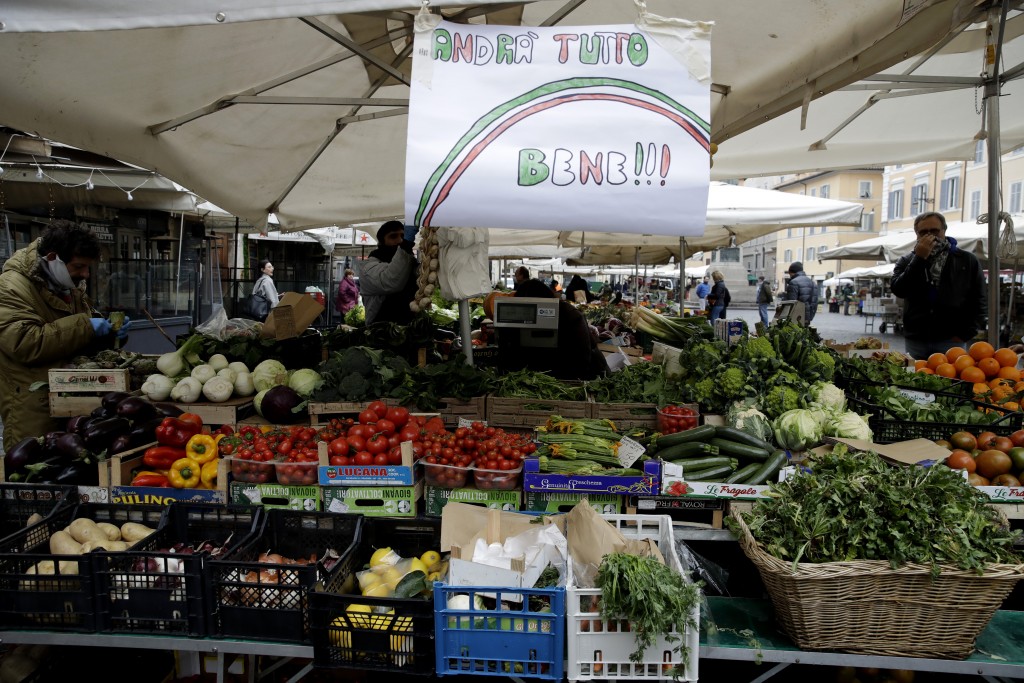 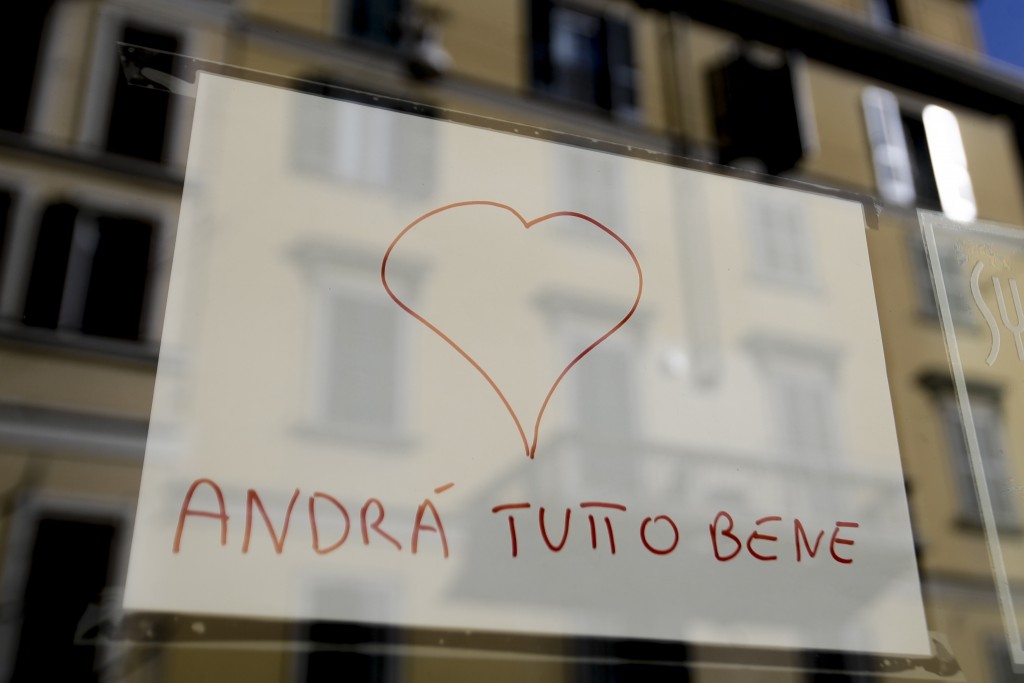 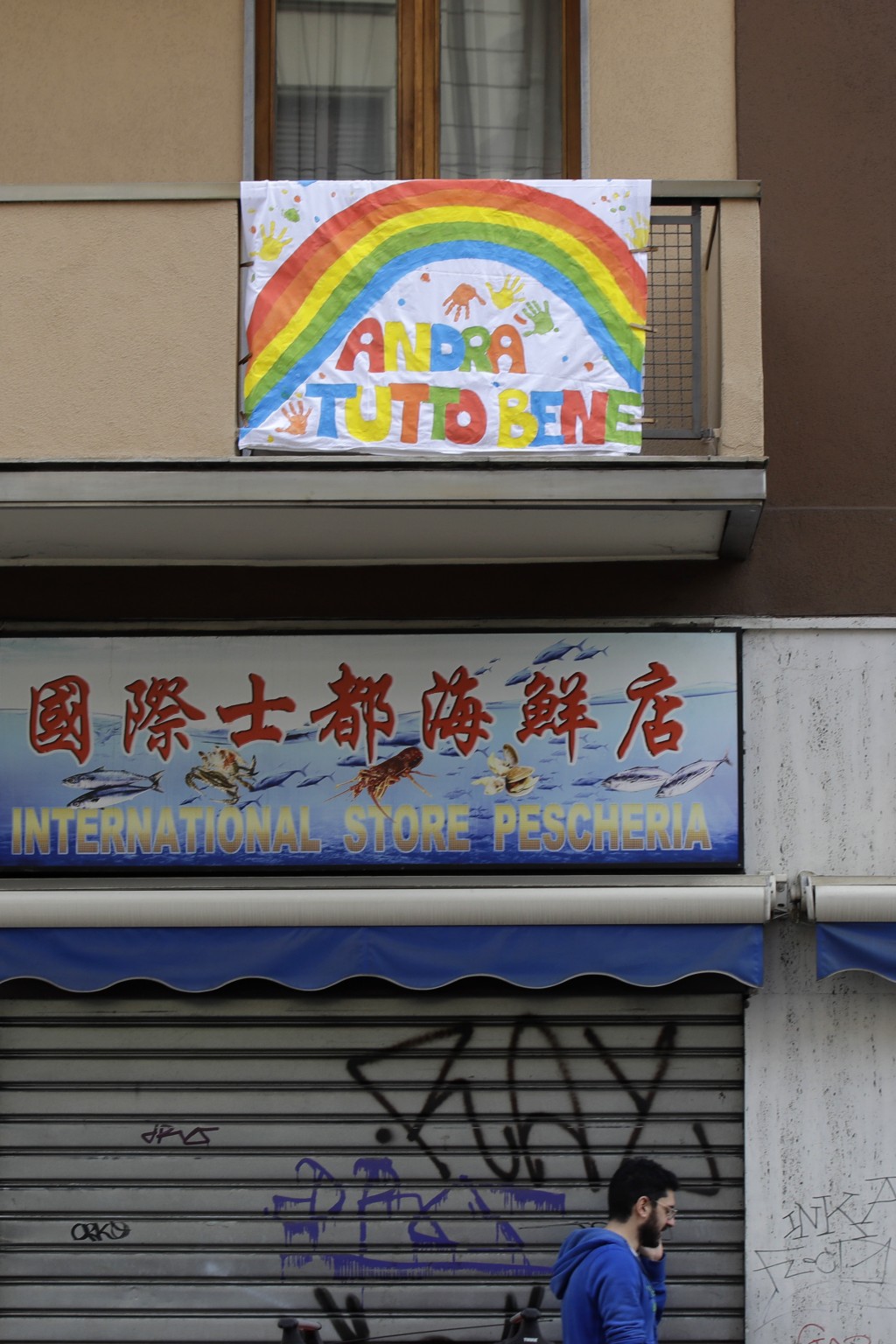 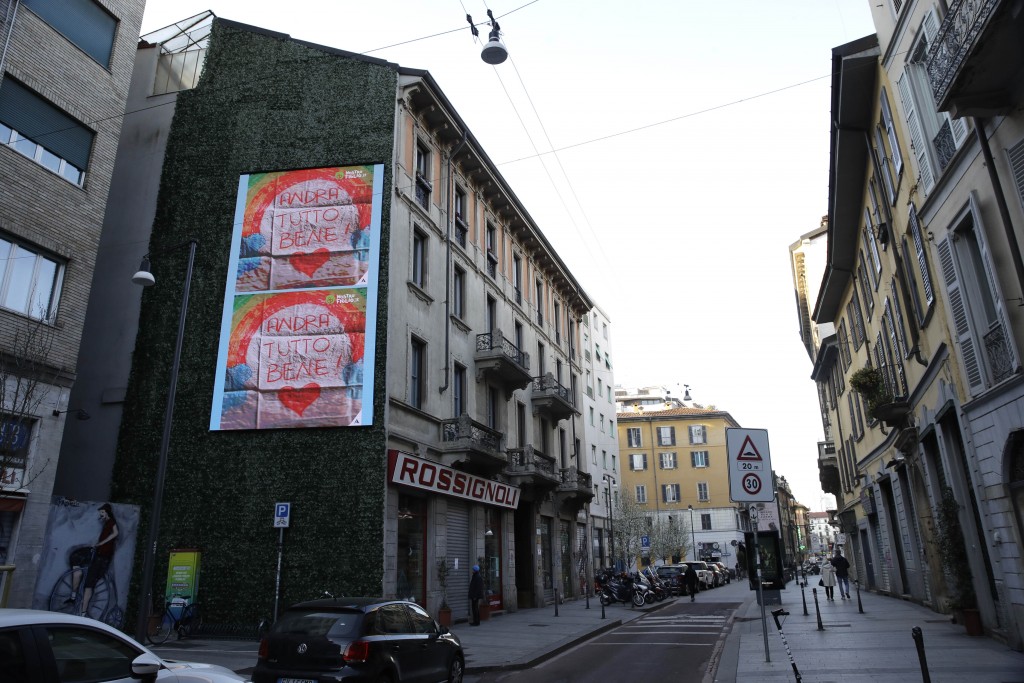 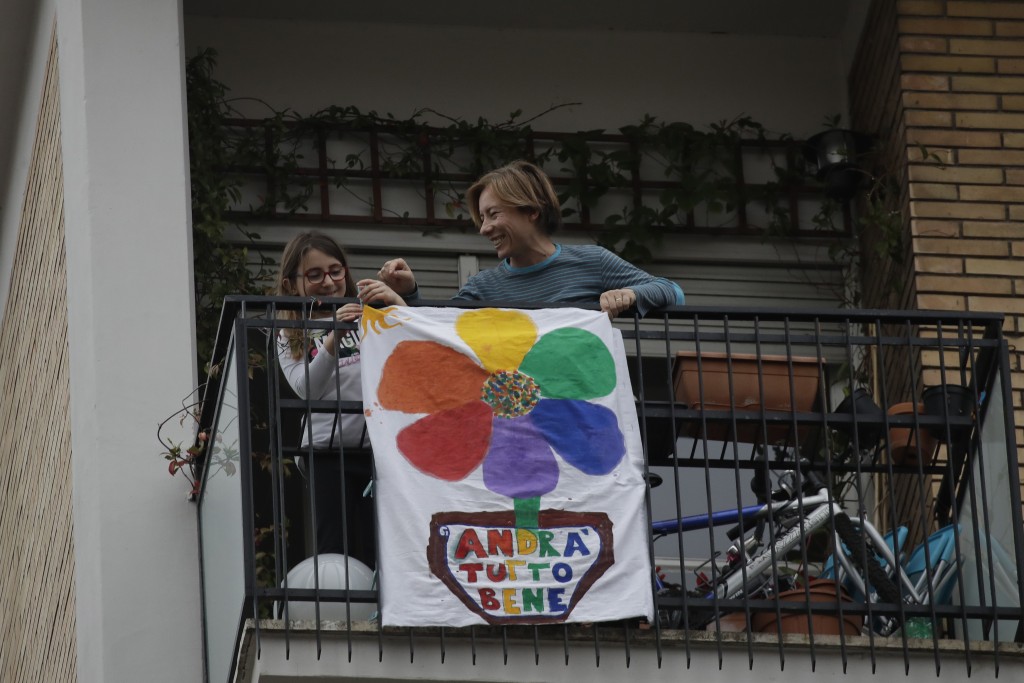 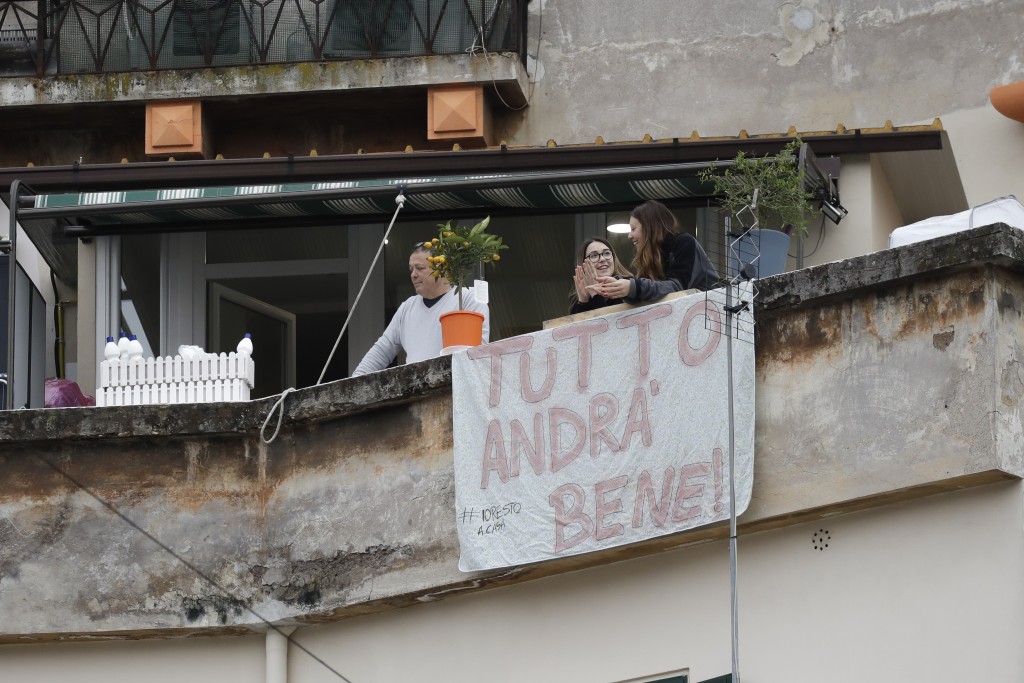 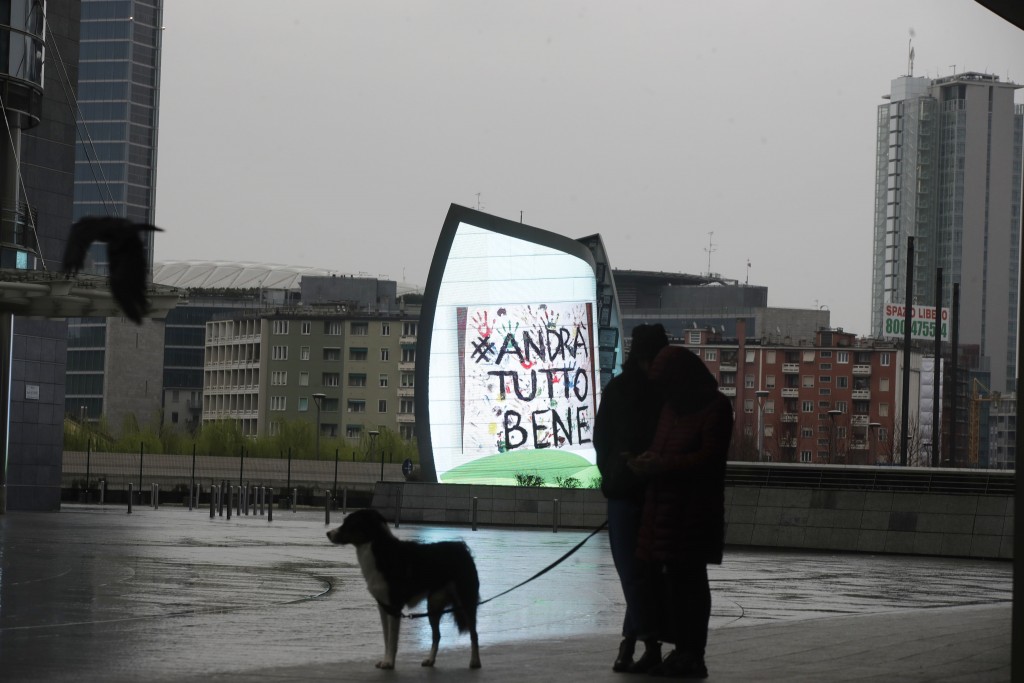 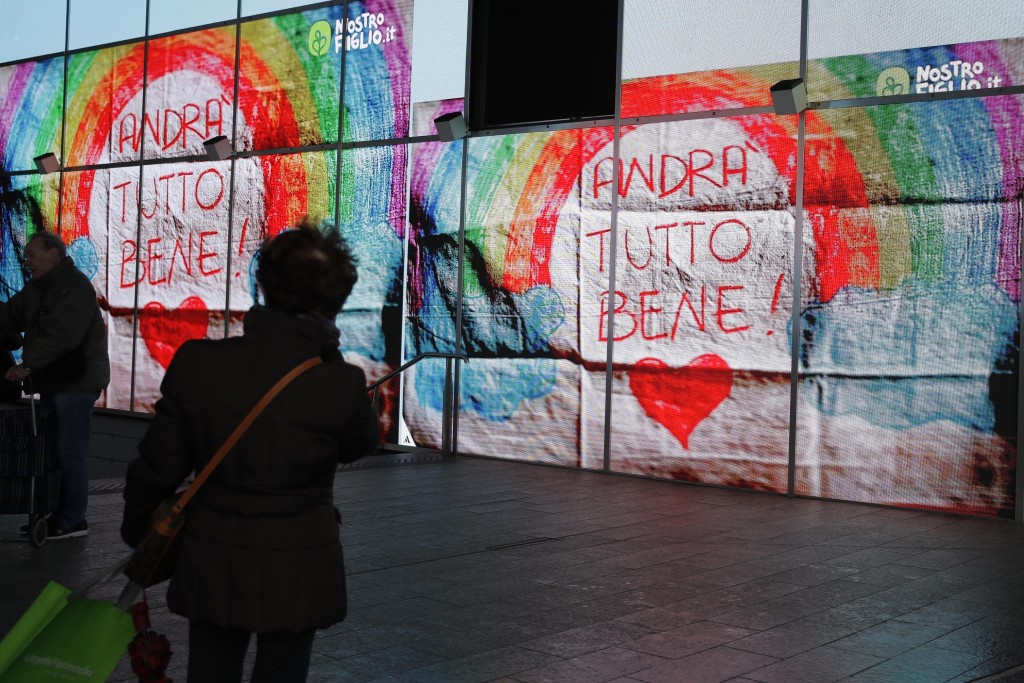 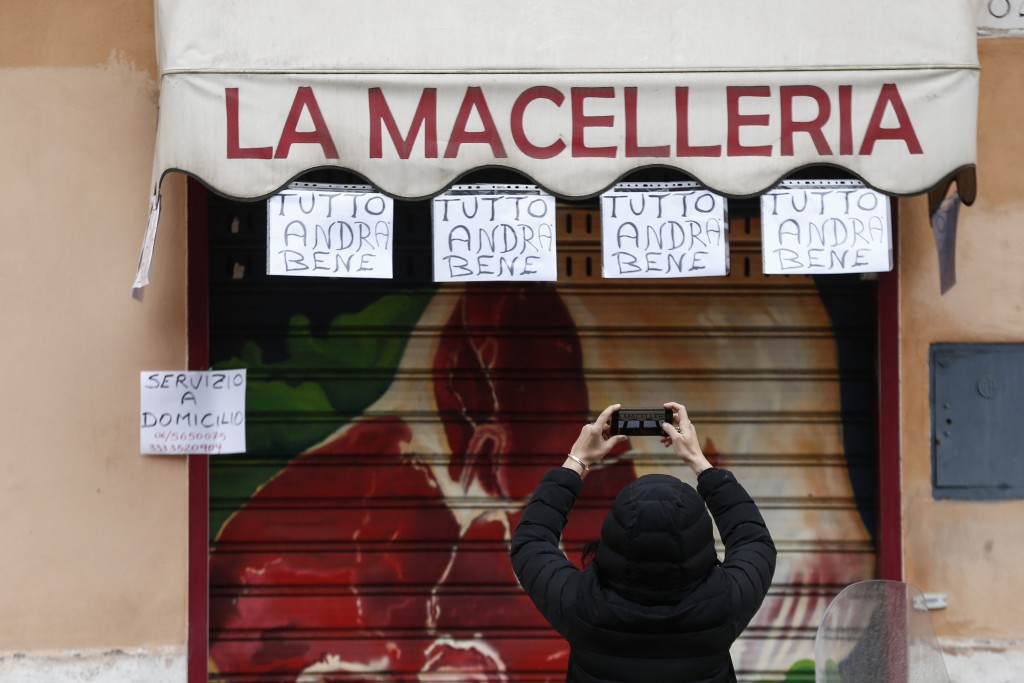 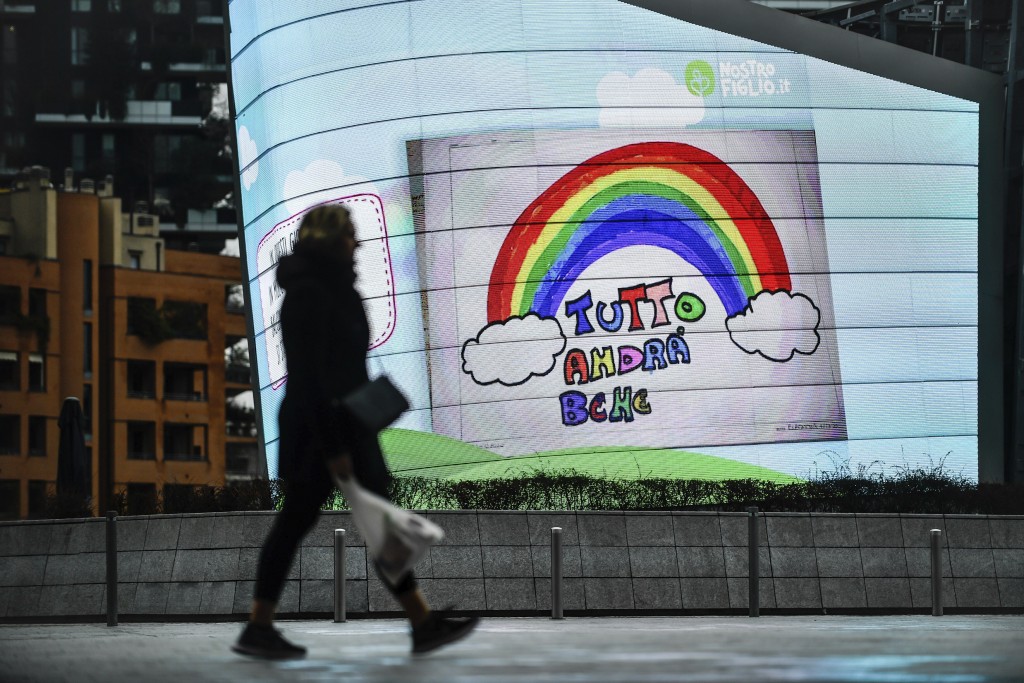 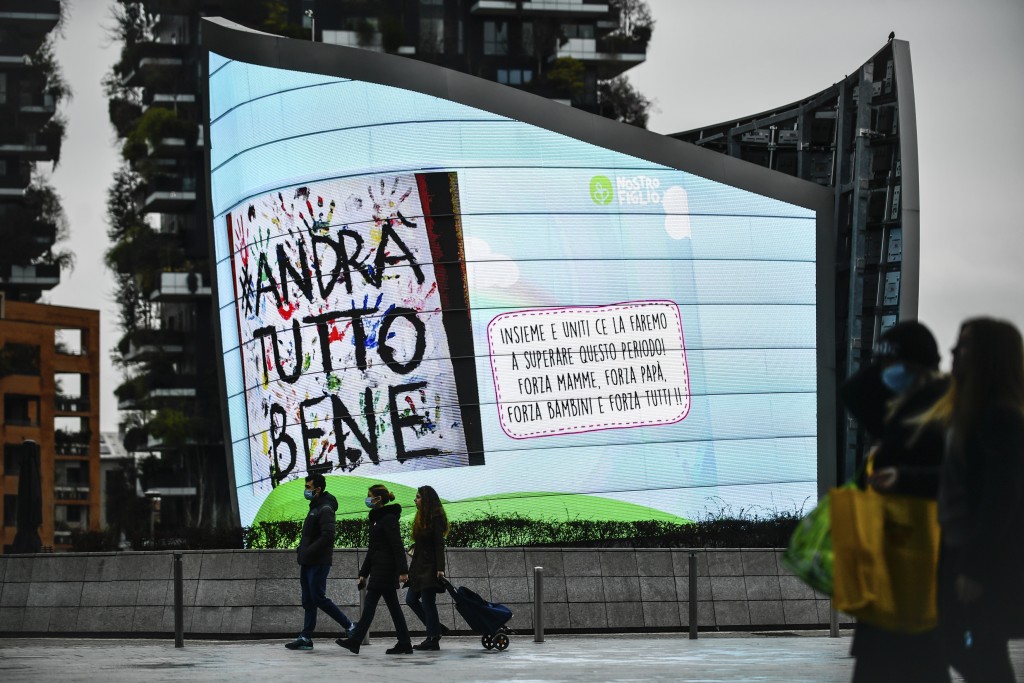 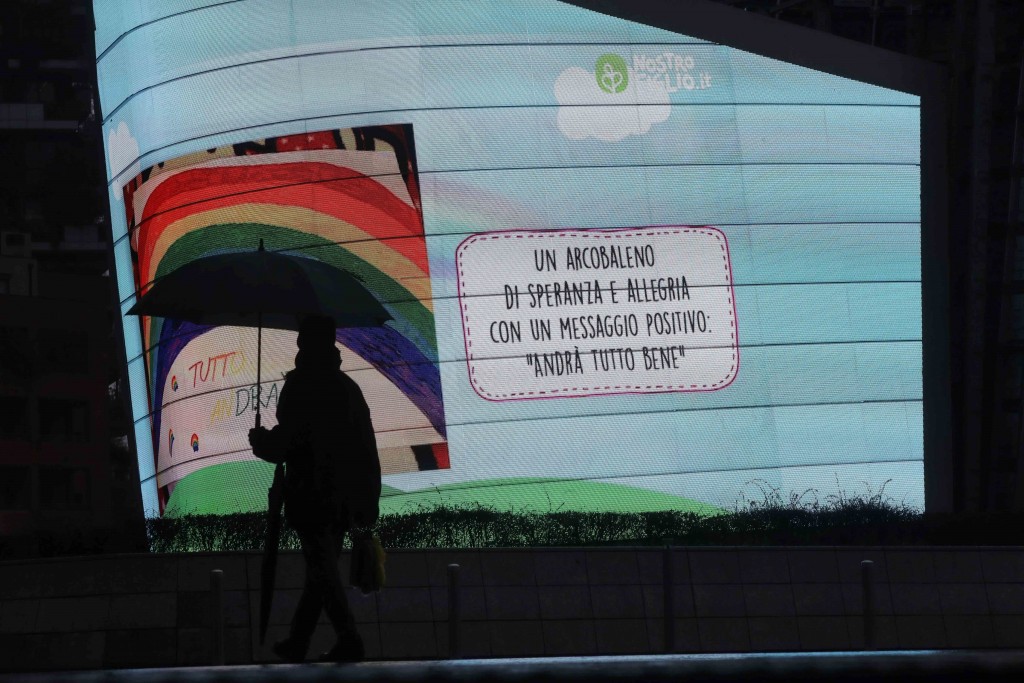 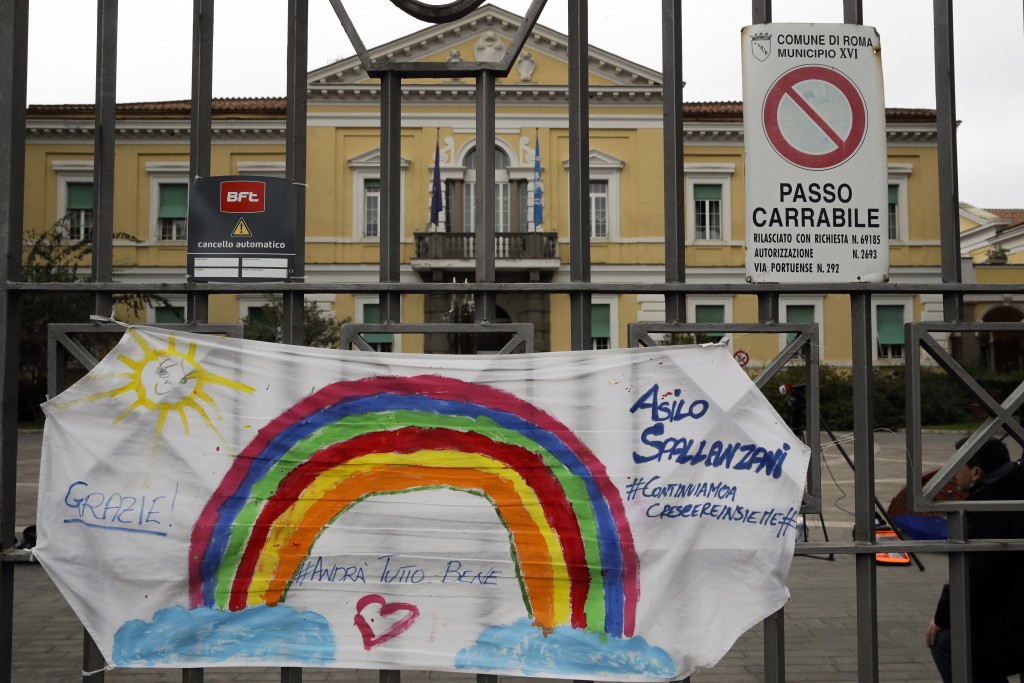 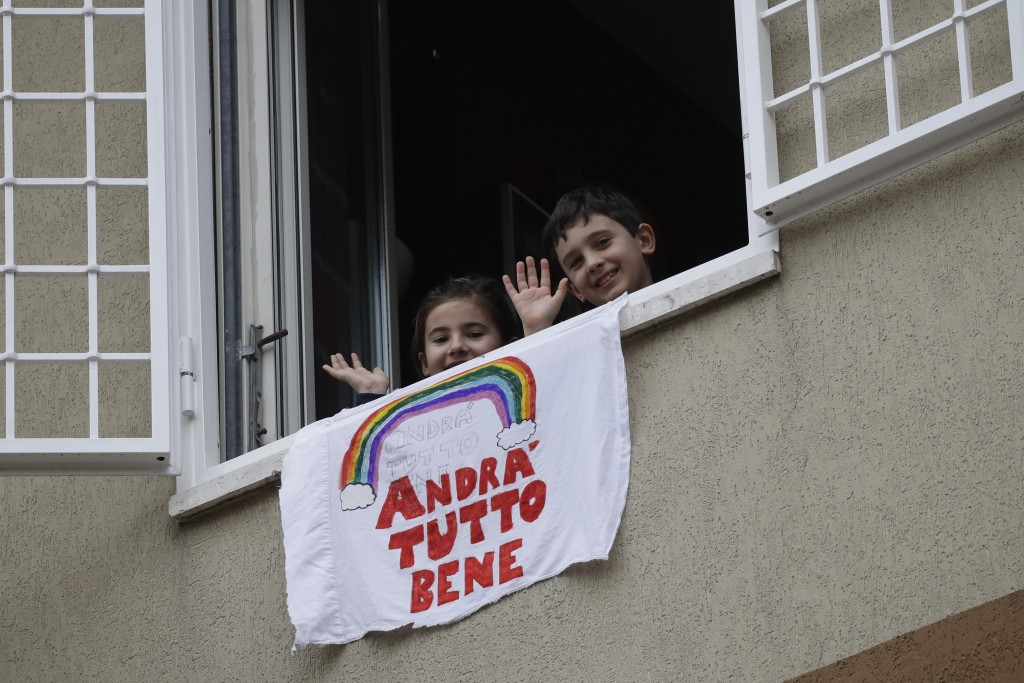 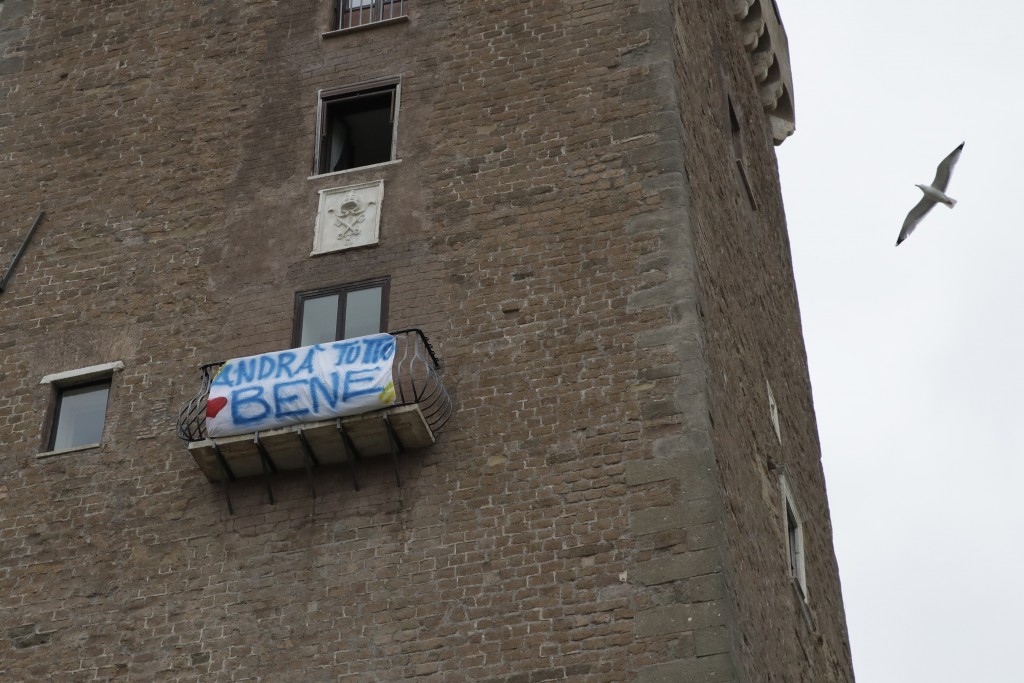 ROME (AP) — Italians are cooped up at home by a government decree to combat the spread of coronavirus. They are coping creatively.

A trumpeter on a balcony in Sicily blasts out “Imagine.” At the same precise moment, a saxophonist plays some jazz rifts through an open apartment window in northern Turin. Pot lids are clanged like cymbals by homemakers in aprons in Rome and Naples — all at the stroke of 6 p.m.

In Milan, an opera singer leans out her window and sends notes wafting through the early evening air. Elsewhere in the city, which is Italy’s financial hub in a region that has the most coronavirus cases and deaths in the country, people strum guitars on perches overlooking the Navigli, a neighborhood that normally bubbles with nightlife.

And everywhere it seems, from north to south, windowsills and terraces are draped with Italian flags in a country which rarely displays them in any great numbers except during the World Cup every four years.

Such simultaneous combustion of creativity, which burst into the open Friday and is continuing daily, is how Italians, forced into domestic isolation, are coping and keeping spirits high as they do their part to slow the spread of coronavirus.

COVID-19 cases rise and deaths are mounting in the increasingly locked-down nation — even cemeteries are now off-limits.

But citizens are passionately converting cooped-up energies into initiatives to make them feel still in touch while their government, struggling to contain Europe’s largest outbreak, forbids them from leaving home except for essential reasons such as work, food shopping or bringing assistance to the elderly or disabled.

The virus can cause mild to moderate symptoms, although some cases are severe. The very large majority of those infected recover.

In Milan, residents thirsting for their cherished aperitivo (aperitif) tradition in their favorite bars have taken to toasting each other — via video chats — with laptops set up on credenzas, desks or dining room tables and a raised glass of wine or a bottle of beer from the security of their homes, possibly striking up new connections in the process.

One creative type who wanted to shed the lockdown loneliness blues is Paola Meztli Salas Pallares, a 32-year-old woman from Mexico who came to Milan in 2015 to pursue a career in graphic design. She came up with the ‘’virtual” aperitivo idea, and, “after the first session I feel better,” she said. “I now know there are people like me that feel locked down and that are interested making new friends.”

She added that she’s looking forward to more of these “really nice sisterhood sessions” throughout the lockdown.

In Naples' scrappy Scampia neighborhood, where many youths risk being recruited by local Camorra mobsters, judo coach Gianni Maddaloni has taken to WhatsApp for coaching sessions for the youngsters who usually stay off the streets and out of trouble by training in his gym.

Solidarity across rooftops and courtyards seemed ever more precious after many cities, including Rome and Milan, decreed public parks off-limits Saturday, after some people disobeyed lockdown rules and hung out in groups to jog together, play soccer or crowd benches. Under the government decree, people had been allowed to stroll, run or bike-ride in parks but only if they kept at least a meter (around three feet) apart from others.

Encouragement came from Pope Francis, who himself has lamented that he felt as if he were in a “cage” at the Vatican, since his public audiences have been scrapped. Even his weekly blessing, delivered on Sundays from a window overlooking St Peter’s Square, has been suspended while Italy hunkers down to reduce mass gatherings.

During Mass on Saturday at the Vatican hotel where he lives, Francis had words for those forced to stay home, their routines suddenly yanked from under them.

“Today I'd like to ask for a special prayer for families — families that suddenly find themselves with children at home, because schools are closed for safety reasons,” he said. "So they have to manage a difficult situation. They have to manage it well, with peace and joy."

Joy did seem to exude from many balconies, or at least optimism from the hands of children. Many families hung banners with crayoned, or painted, rainbows, with a hashtag mantra: "Tutto andra' bene," or everything will turn out OK.

In the Mazza family, in Rome’s working class Tuscolano neighborhood, two children were busy painting just such a banner.

Colleen Barry reported from Milan. Luca Bruno and Daniella Matar in Milan contributed to this report.