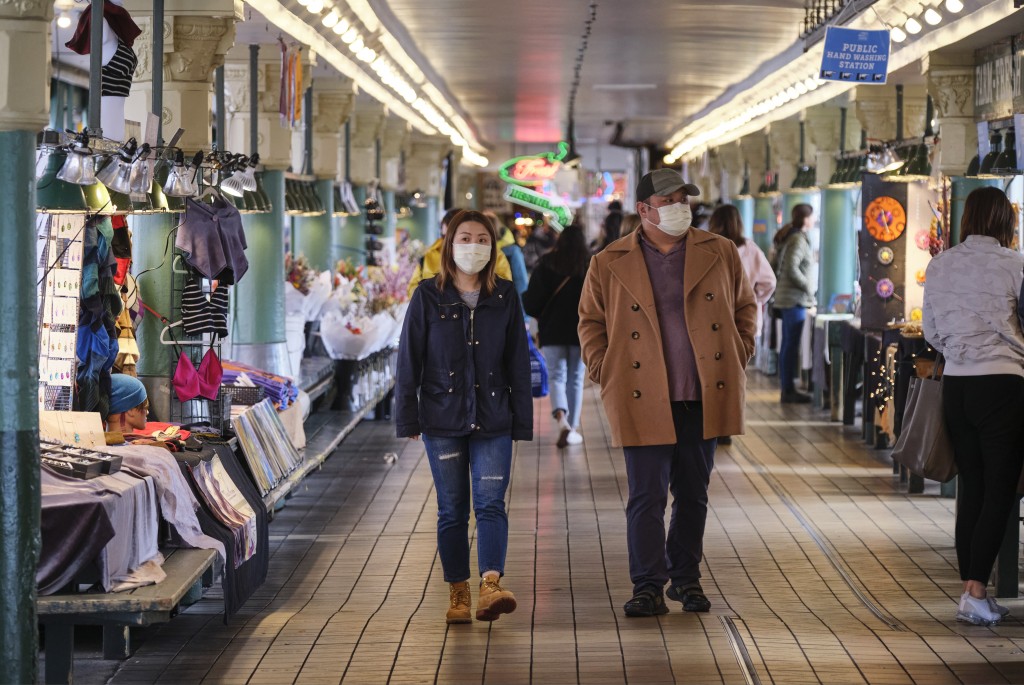 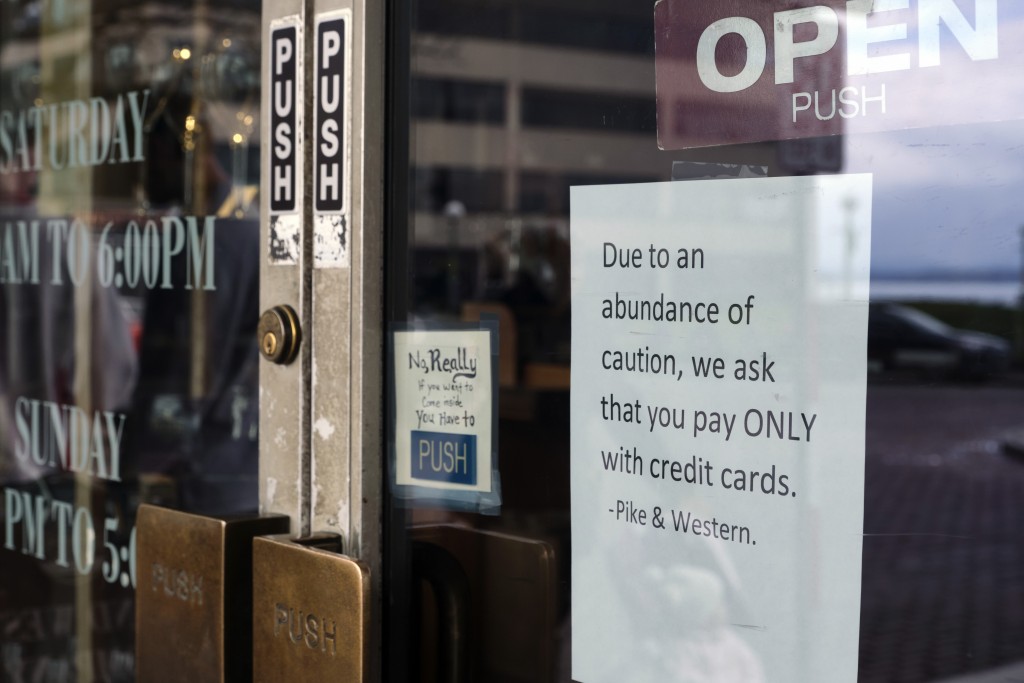 WASHINGTON (AP) — Buffeted by fears of the fast-spreading coronavirus, consumers in the United States and overseas are showing increasing signs of cutting back on spending in what amounts to a severe threat to economic growth.

Consumer confidence has declined in most advanced economies in the past month, surveys show, amid a drumbeat of travel disruptions, event cancellations and business closures.

Large public gatherings have become suddenly rare. U.S. movie ticket sales are down, and travel and hotel bookings have plummeted. Because consumers are the primary driver of growth in most advanced nations, any sharp drop in spending could cause those economies to slip into recession.

Even before coronavirus cases surfaced in her state, Whitney Parks, a 29-year-old resident of Ypsilanti, Michigan, was staying home with her two children whenever possible. A server at a restaurant in nearby Ann Arbor, Parks noted that business there has noticeably declined.

“A lot of people don’t really want to be out in the public right now,” she said.

Economists point to confidence among consumers and businesses — “animal spirits,” as the legendary economist John Maynard Keynes called them — as a vital ingredient for growth. People and companies must feel optimistic enough to spend, hire, expand, travel and invest.

“The line between an expanding economy and recession is crossed when investors, businesses and — most important — consumers lose faith," Mark Zandi, chief economist at Moody's Analytics, said. The coronavirus "is especially corrosive on that faith and is thus a serious threat to the record-long economic expansion.”

The viral outbreak is proceeding so fast that there isn't yet any U.S. government data that would reflect its broad impact on the economy. But there are growing signs that consumers are pulling back. Jesse Edgerton, an economist at JPMorgan Chase, said in a research note that U.S. weekly movie ticket sales and Broadway theater ticket sales have sunk about 20% since Feb. 16.

While those sectors constitute a relatively small part of the U.S. economy, Edgerton said, “we do think they may prove illustrative."

Revenue at hotels fell 16% in the first week of March compared with earlier this year, Edgerton added, citing data from Smith Travel Research.

Naomi Goldberg, 37, of Ann Arbor, Michigan, canceled a March weekend trip to Aspen, Colorado, after she heard that some people in the ski town had been tested for the coronavirus. And to avoid crowds, she also decided not to visit a nearby museum with her wife and 6-year-old, a trip that would have cost them about $30 each.

She’s not putting all purchases on hold. A bathroom renovation will go forward. A trip to Yosemite in May is still in the works — for now. And she sees the recent stock market plunge as an opportunity to put more money away.

Even so, stock market drops typically drag down consumer confidence and can limit spending. The Dow Jones plunged an additional 2.000 points Thursday in mid-day trading after having entered a bear market the day before, with stock prices 20% below a record high reached just a few weeks ago.

Consumers have already turned decidedly less optimistic since mid-February, according to daily tracking surveys by Morning Consult. Its polls show that U.S. consumer sentiment has fallen more than 3% since then.

John Leer, an economist at Morning Consult, said the size of the drop was comparable to other recent declines, as in August 2019, when fears over the impact of the U.S.-China trade war intensified. But that downturn reversed itself once the trade fight cooled and a preliminary agreement was reached. It's far less clear in this case what governments can do to offset the cascading fears and diminished spending that have been triggered by the viral outbreak.

“Here we have a really strong fall, and it's unclear exactly what sort of policy response would get consumer confidence to return to its prior level,” Leer said.

An increasingly gloomy outlook among consumers in the U.S. and around the world will likely also depress sales of such high-cost purchases as cars, furniture and appliances, which rise and fall more dramatically than services in response to changes in confidence.

LMC Automotive, a consulting firm, now forecasts that global auto sales will fall 4.4% in 2020 to a seven-year low. IHS Markit predicts computer and electronics sales will fall 1.9% this year.

Nearly two-thirds of U.S. consumer spending goes to services, such as health care, banking and mobile phone connections. Tim Quinlan, an economist at Wells Fargo, said in a research note that most services spending will continue even if the economy falters. Americans will continue to pay utilities and rent, for example, and, if anything, they will probably increase their spending on health care, cleaning supplies and food to eat at home.

But other spending on services, such as restaurant meals, public transportation, and hotels, are sure to suffer from the outbreak, he said. Together, they account for 10% of all consumer spending.

Quinlan expects some offsetting benefits in the United States. This week's plunge in oil prices should translate into lower gas prices. And mortgage rates have reached record lows, causing a spike in the number of homeowners who are refinancing their mortgages. Doing so will lower their monthly payments and free up money to spend elsewhere.

Even so, Quinlan forecasts that spending growth in 2020 will fall to just 1.8%, the lowest in seven years.

Past disruptions have depressed consumer spending, particularly the Sept. 11, 2001, terrorist attacks and the 2008-2009 financial crisis. Ian Shepherdson, chief economist at Pantheon Macroeconomics, calculated that discretionary spending, which excludes housing, food, fuel and health care, plummeted about 5.5% from peak to trough after both crises. In 2008, the fall occurred over 18 months.

Such a drop would send the economy into recession, although Shepherdson isn't forecasting anything that dramatic.

“But it seems prudent to expect a healthy drop in March and April, and perhaps May, too,” he said.

Many economists still think the United States may avoid a recession, particularly if the disease has been brought under control by the early summer. Spending would presumably rebound sharply. But most also think the likelihood of a recession has surged in recent weeks.

In Europe, forecasters widely expect a recession to result from tumbling consumer spending. Mass cancellations of flights, vacations and business events are inflicting damage on hotels, restaurants, and shops.

About 187 million fewer people are expected through Europe’s airports this year — a figure likely to grow sharply with President Donald Trump's decision to suspend travel from Europe to the United States for 30 days. That includes American and Asian tourists. Chinese shoppers are by far the biggest spenders on big-ticket luxury goods and are nowhere to be seen. Hotel room occupancy rates in Venice have dropped 1% to 2%.

In Rome, Umberto Tucci said the damage to his restaurant business was magnified by limits that the Italian government has imposed on business hours. A decree Monday night said restaurants and bars must close at 6 pm.

“This mandatory closure is worsening the situation,” he said.

Across Asia, people are staying at home as well. Consumer sentiment in Japan has plummeted 11% this year to a 52-week low, according to Morning Consult.

And in Singapore, Nurul Fahin, 19, has cut back on spending as her income from her part-time retail job has fallen. Previously, she spent about $100 a month on clothes and make-up. Now, she rarely buys new clothes.

"I will only buy items I really need like foundation when it's running out," she said.

She used to earn about $500 a month working four to five shifts a week. She has now been told to come into the shop for just one or two shifts and earns only about $100.

In New York City, at the Brookfield Place mall, which features upscale food courts and high-end stores like Ferragamo and Gucci, the crowds are much thinner from even a week ago, with more people working from home.

Chloe Whipple, 18, from Kilgore, Texas, was visiting the mall as part of a high school senior trip. She was with her aunt, Shelly Wood, 50 from Shreveport, Louisiana.

"It's scary when you see people with masks," she said. “Are they affected? You don't want to touch anything.”

Whipple said she is spending less time at the local mall. She just learned that the first case of coronavirus in East Texas was confirmed in her town.

Wood said she hasn't cut back her spending. But she said she’s being "cautious and conscious about what we do and where we go.''