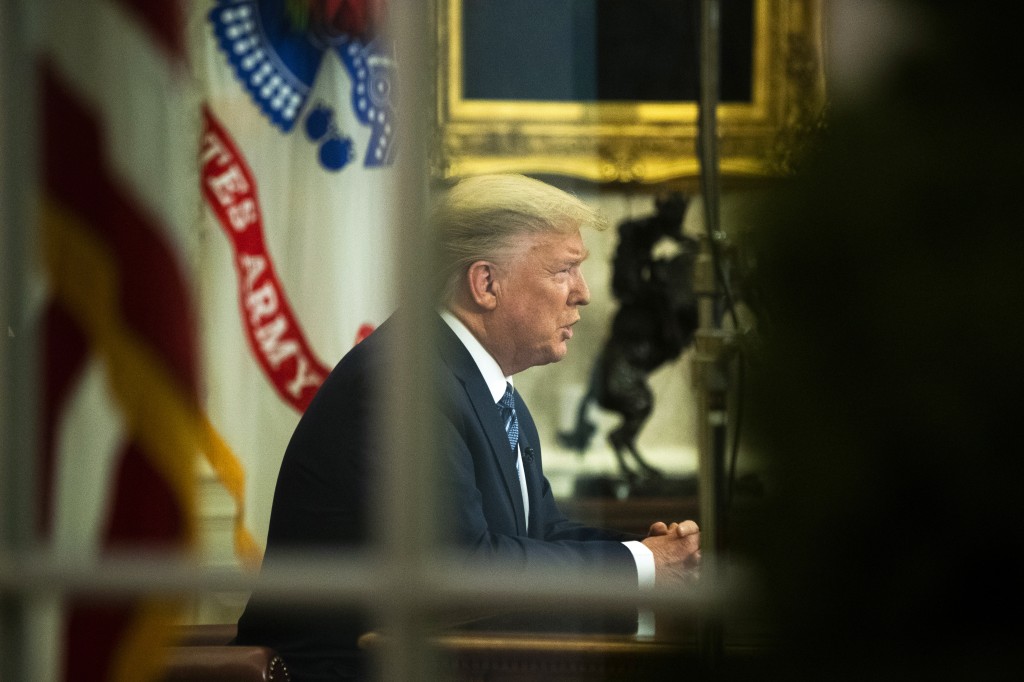 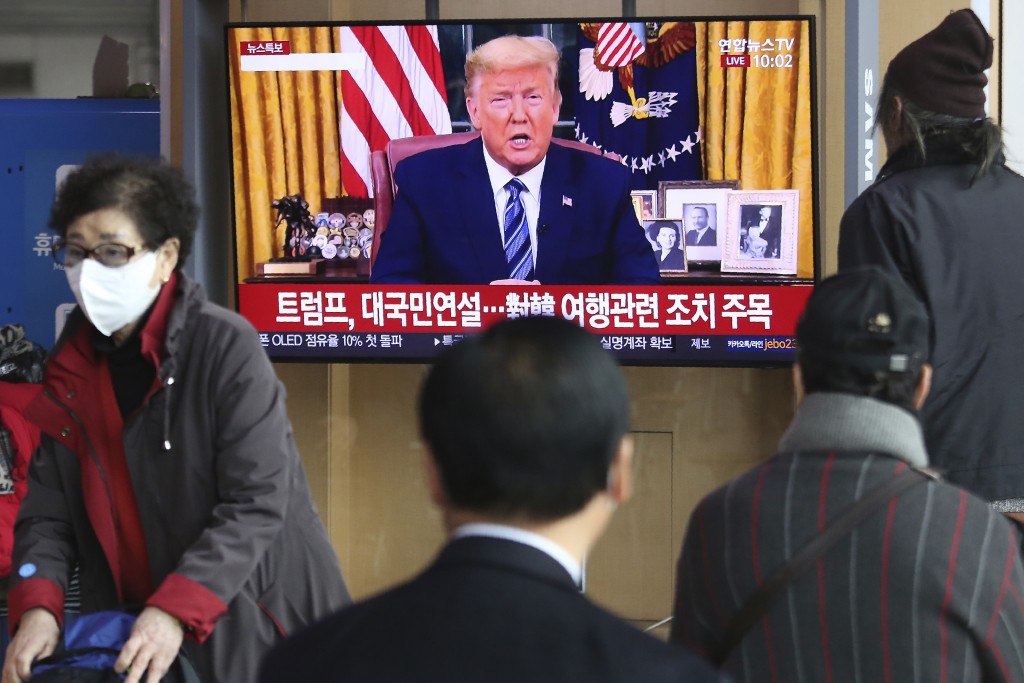 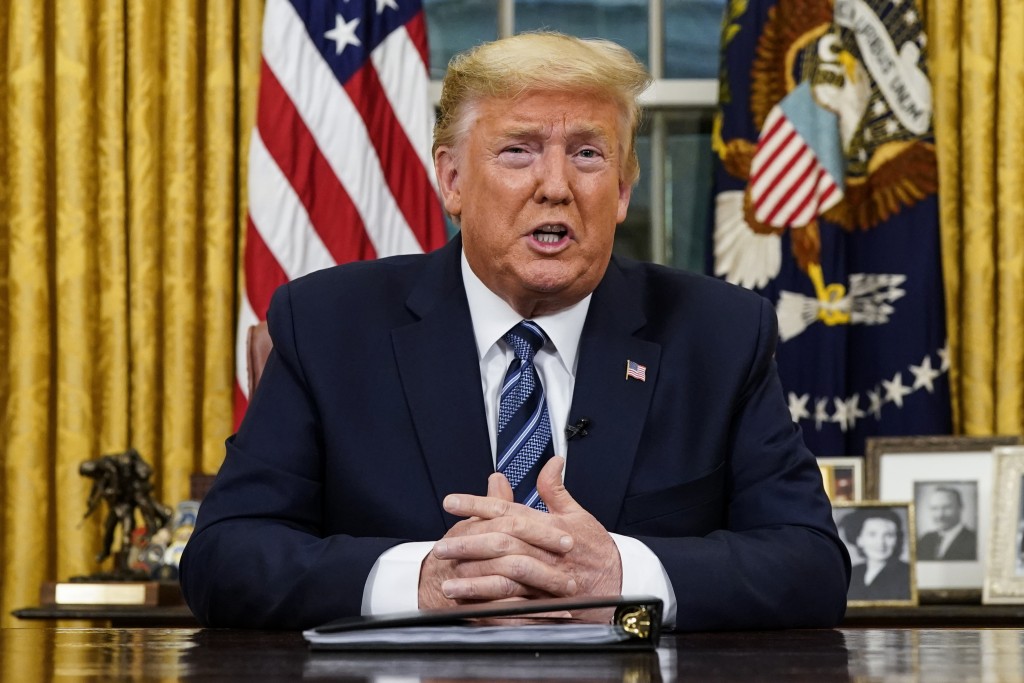 NEW YORK (AP) — The escalating coronavirus crisis is presenting President Donald Trump with a challenge for which he appears ill-equipped, his favorite political tactics ineffective and his reelection chances in jeopardy.

A rare crisis battering the White House that is not of the president’s own making, the spreading coronavirus has panicked global financial markets and alarmed Americans, many of whom have turned to the Oval Office for guidance and reassurances. But what they have found is a president struggling for a solution, unable to settle Wall Street and proving particularly vulnerable to a threat that is out of his control.

In an address to the nation Wednesday night, Trump announced a sweeping travel ban for much of Europe as well as a package of proposals to help steady the teetering economy. But he continued to play down the severity of the situation, painting it as a foreign threat that soon will be banished rather than focusing on managing the growing number of cases at home.

“This is the most aggressive and comprehensive effort to confront a foreign virus in modern history,” Trump declared.

Addressing the economic costs, he added, "This is not a financial crisis, this is just a temporary moment of time that we will overcome together as a nation and as a world.

But the virus has appeared impervious to the president's bluster.

The virus does not have a Twitter account and, unlike so many previous Trump foes, is resistant to political bullying or Republican Party solidarity. It has preyed on his lack of curiosity and fears of germs while exposing divides and inadequacies within senior levels of his administration. It has taken away Trump’s favorite political tool, his rallies, from which he draws energy and coveted voter information.

And eight months from Election Day, it has endangered his best reelection argument — a strong economy — just as Joe Biden, the candidate emerging from the Democratic field, seems poised to take advantage of a political landscape upended by the virus.

“Crises of varying degrees produce fascinating and often consequential elections: Think 1860, 1932, 1968, 2008. Such races turn on questions of chaos versus order and favor the candidate who seems to offer the best chance of bringing order to the country in times of uncertainty,” said presidential historian Jon Meacham. “What’s interesting about those examples is that incumbents, or candidates of the incumbent party, lost all of them.”

One of Trump’s most potent political assets is his ability to read a room, or a moment, often eschewing long-term planning for instantaneous reaction.

But he was slow to come to grips with the threat posed by the coronavirus as it exploded in China, distracted by impeachment and unwilling to scare the markets by stirring panic or upsetting his trading partner in Beijing, Xi Jinping.

The virus first spooked Trump while he was in India two weeks ago, as a 1,000-point drop on Wall Street caused him to pepper aides with questions about the markets even as he was feted in New Delhi. But after he returned to the states, Trump continued to play down the virus, lashing into officials, including Health and Human Services Secretary Alex Azar, for talking up the possible severity of the threat. He urged other aides, including Kellyanne Conway and senior economic adviser Larry Kudlow, to go on television and preach confidence, according to five White House officials and Republicans close to the White House. They spoke on condition of anonymity because they were not authorized to discuss private conversations.

And as he has so often done before, Trump believed that through his force of will and ability to dominate a news cycle, he could alleviate the crisis, taking to both Twitter and the White House briefing room podium to dismiss the threat.

"It will go away, just stay calm," Trump said Tuesday after visiting Capitol Hill. "Be calm. It's really working out. And a lot of good things are going to happen."

The markets, unlike traditional political foes, have not listened.

And while Trump deemed the media coverage of the virus “a hoax” meant to create hysteria and tank his poll numbers, it is a harder sell to ask his supporters to dismiss media reports when they see people in their own communities getting sick, schools closing and local drug stores unable to keep hand sanitizer on the shelves.

Infighting erupted within the administration, as Trump blamed and then sidelined Azar, relegating the health secretary to a secondary role behind Vice President Mike Pence on the coronavirus task force. But while Trump empowered Pence and respected medical professionals to take the lead on briefings, he ignored his advisers’ advice to let the vice president be the public face of the administration’s response, according to the officials.

Unable to cede the spotlight, Trump spoke extemporaneously to reporters at the Centers for Disease Control and Prevention in Atlanta on Friday, requiring the vice president, who addressed the media in Washington moments later, to correct the president’s misstatements about the availability of testing kits and the fate of a cruise ship filled with coronavirus patients.

It was only on Monday, as he was flying from Florida back to Washington, that the economic severity of the crisis hit home for Trump, according to three of the officials and advisers.

In one cabin on Air Force One, Matt Gaetz, a Florida GOP congressman who had accompanied Trump to a series of Orlando fundraisers, had isolated himself after learning he’d come into contact with someone infected by the virus. And on the TV in Trump’s aircraft office, Fox News was broadcasting dire graphics illustrating the single worst day for stock markets since the 2008 financial crisis.

By the time the plane touched down at Joint Base Andrews, Trump told aides he would change tactics and propose a broad economic stimulus to reassure investors. But the fate of his plan, which included a suspension of the payroll tax, remained unclear as the week went on and the markets’ roller coaster ride continued.

“I think that in many ways this has made Trump a wartime president,” said former campaign communications director Jason Miller. “This virus has no borders, doesn’t discern between allies and foes and attacked the nation’s health security and economic security. It is going to take continued bold action from the president.”

After surviving impeachment, Trump has in earnest remade his White House staff to focus on reelection, prioritizing loyalty over experience. Increasingly focused on his campaign, Trump pushed aides to continue scheduling massive rallies, even as his Democratic foes had begun canceling theirs.

But late Wednesday, the White House announced that a trip to Colorado and Nevada had been cancelled. At least for now, no rallies were scheduled as a means to blunt the momentum of his likely general election foe, Biden, who offers himself as someone uniquely positioned to respond to the coronavirus.

As vice president, Biden helped manage the Ebola outbreak and has long shown an ability to comfort rattled voters. Moreover, the Trump campaign believes that scuttling normal political activity benefits Biden, who tends to draw small rally crowds and has had some eyebrow-raising moments when interacting with voters.

“This is something that doesn’t hurt and probably actually helps Joe Biden,” said Eric Trump, the president’s son and frequent campaign surrogate. “This works for him on all fronts.”

Biden, now in command of the Democratic race after a series of primary wins Tuesday, has drawn a clear comparison between how he would handle the crisis and the president's scattershot approach from the Oval Office.

"At this moment, when there's so much fear in the country and so much fear across the world, we need American leadership," Biden said. "We need presidential leadership that's honest, trusted, truthful and steady, reassuring leadership.”

EDITOR"S NOTE — Lemire has covered politics and the White House for The Associated Press since 2013.