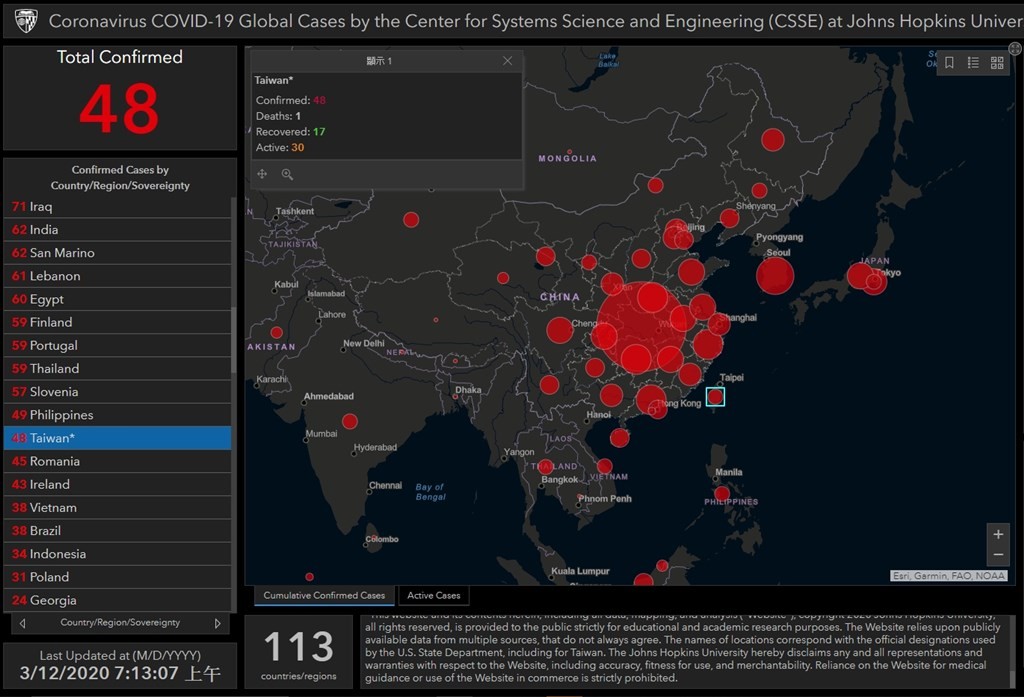 TAIPEI (Taiwan News) — After drawing fierce criticism for abruptly changing its listing for Taiwan to "Taipei and environs," Johns Hopkins University (JHU) on Wednesday (March 11) restored the original entry, but added an asterisk.

As recently as Monday (March 9), Johns Hopkins was still listing the country as "Taiwan" on its interactive map titled "Coronavirus COVID-19 Global Cases by the Center from Systems Science and Engineering (CSSE) at Johns Hopkins." However, by Tuesday (March 10), the university had inexplicably changed its policy on Taiwan's political status by listing it as "Taipei and environs."

Twitter users that day started criticizing the university for the factual error, and Axios ran an article on the subject. When the article's author, Bethany Allen-Ebrahimian, requested an explanation, Lauren Gardner, an associate professor of civil and systems engineering tasked with running the map, initially told her that they had noticed the error and were going to correct it. However, a JHU spokesperson later responded to her saying that Gardner was "confused" and added that they would keep the term "Taipei and environs." The spokesperson said that this was done to bring the map in alignment with the World Health Organization (WHO) guidelines.

Next, JHU removed Taiwan entirely from the list of countries, leaving only "Taipei and environs" as a part of China. As the chaos continued, JHU staffers then removed all references to Taiwan and Taipei.

On March 11 Taipei time, Taiwan's Ministry of Foreign Affairs (MOFA) spokeswoman Joanne Ou (歐江安) announced that JHU had improperly labeled Taiwan on its website. In response, she directed Taiwan's representative office in the U.S. to immediately to lodge representations with the university and demand a correction, reported CNA. U.S. Senator Marco Rubio (R-FL) then posted a scathing tweet in which he wrote that "It appears China bullied a U.S. university, Johns Hopkins, into changing their coronavirus interactive map." He then pointed out that while the website had previously listed "Taiwan accurately as a country," they have suddenly listed it "as a part of China."

Today, one month later,they have Taiwan listed as part of China under “Taipei and environs"
H/T Axios pic.twitter.com/BJOrcSFUub

Finally, on the evening of March 11 Eastern Standard Time, the Axios author announced that JHU had restored Taiwan to its list of countries. Douglas Donovan, a representative of the university's media relations office told CNA that when the team running the website had conducted a comprehensive review of the dashboard this week and initially decided to follow the WHO's naming scheme to "achieve consistency in reporting." However, Donovan said that after further review, the team decided to follow the official naming conventions, including the use of "Taiwan." Indeed, the name has been restored to the site, but an asterisk has been placed next to the country.

At the bottom of the page, Johns Hopkin's explanation for the asterisk first states the university's copyright claim to all content. Next, it wrote that the data being used is from multiple sources that "do not always agree."

The university made it clear that Taiwan's listing is based on the U.S. State Department's designation for the country. Lastly, the university absolved itself of any responsibility for the content it presents on the site. After drawing fierce criticism for abruptly changing its listing for Taiwan to "Taipei and environs," Johns Hopkins University (JHU) on Wednesday (March 11) restored the original entry, but added an asterisk.