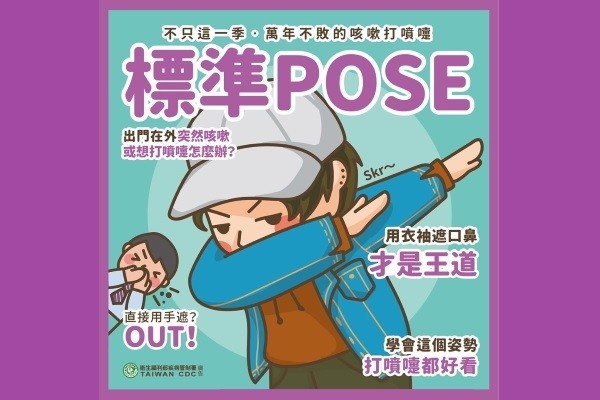 TAIPEI (Taiwan News) — In an effort to spread the word about the best way to cover one's mouth when sneezing, the Ministry of Health and Welfare (MOHW) on Friday (March 6) uploaded this illustration based on a popular American dance move.

As the Wuhan coronavirus (COVID-19) continues to spread across the globe, the MOHW on Friday posted an illustration showing a cartoon figure "dabbing" when he sneezes. The MOHW pointed out that sneezing into one's hands without immediately washing them afterward makes the spread of many germs, including COVID-19, more likely as one touches railings, hand grips, smartphones, doorknobs, elevator buttons, etc.

Instead, the MOHW suggests people sneeze into the crook of their arm, or inner elbow. The pose used by the cartoon character is the "dab," which is a popular dance move that began in Atlanta in the mid-2010s.

The move consists of a person bending one arm and tucking their face into the crook of their arm with the palm facing downward and angled upwards, while raising the rear arm in parallel with the front arm. The editor of the MOHW Facebook page also posted a photo of himself striking the pose.

The clever meme soon achieved the desired effect, rapidly gaining 14,000 likes, with some netizens posting their own version in the comments below. Many netizens said they would like to see the strapping young page editor's face and watch Health and Welfare Minister and Head of the Central Epidemic Command Center (CECC) Chen Shih-chung (陳時中) strike the pose.