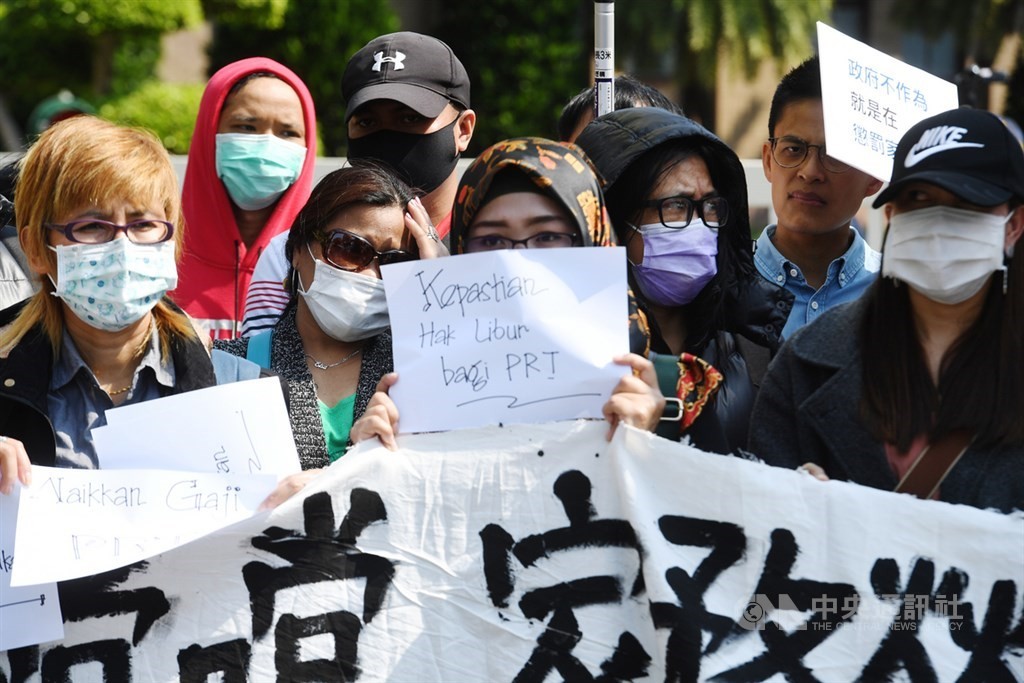 About 50 activists, including migrant workers. attended the rally outside the Executive Yuan, which was organized by the women's rights group Awakening Foundation and the Migrants Empowerment Network in Taiwan (MENT), a coalition of 10 migrant rights groups.

Gracie Liu (劉曉櫻), director of the Migrants and Immigrants Service Center under the Hsinchu Catholic Diocese, said even though the annual day celebrating the achievements of women has been celebrated for over a century, the working conditions of migrant domestic helpers and caregivers in Taiwan, who are mostly women, still need to be improved.

"Existing laws do not properly protect our over 200,000 migrant domestic helpers and caregivers and with their long work hours it is as if they are working in a sweatshop," she said.

There are 262,877 migrant caregivers and domestic helpers in Taiwan, according to Ministry of Labor statistics valid as of the end of January. The statistics also show that 260,873 are women and 2,004 male.

A study shows that caregivers and domestic helpers work over 13.6 hours daily with some not even given eight hours of rest per day, Liu said, adding that many of their holidays are non-existent because what should be a day off is exchanged for overtime pay.

A 34-year-old single parent Filipina caregiver, who wished to be identified only as Sam, said she worked anywhere from 14-16 hours a day at a nursing home in New Taipei when she came to Taiwan in 2018.

"Sometimes we don't even get a holiday for two to three weeks straight because when it's supposed to be our holiday they (her supervisors) come knocking on the dormitory door asking me to go work," she told CNA.

With the help of migrant rights groups, Sam has left the nursing home and now works as a caregiver at a private residence in Taoyuan.

Even though her working conditions have improved a little, she is no longer covered by the Labor Standards Act,which governs Taiwan's monthly minimum wage.

Most migrant workers in the industrial sector covered bythe Labor Standards Act earn the minimum wage of NT$23,100(US$771) a month, while most household caregivers earn only NT$17,000 a month.

She described the issue as the government dumping problems associated with Taiwan's long-term care system onto women migrant workers.

"We are already in the year 2020, but many women's rights are not protected, because we are just throwing problems that would be faced by Taiwanese women onto migrant women," Chou said.

Because of the lack of protection under the Labor Standards Act, the groups also called for the government to institute a mandatory day off per week for migrant domestic helpers and caregivers.

In response, the Ministry of Labor (MOL) said the Labor Standards Act does not apply to migrant domestic helpers and caregivers because of the differences in work hours and patterns between working in a home compared to a factory.

The agreement should also stipulate sufficient rest time for the worker, such as one day off a week, the MOL said, adding that the ministry has already formed a special task force including experts and scholars to formulate a plan to protect the interests of migrant caregivers and domestic workers.

The MOL will continue to work with the Ministry of Health and Welfare to promote the well-being and rights of migrant caregivers, while ensuring the long-term care of patients,the labor ministry added.
International Women's Day celebrates the achievements of women and calls for action to accelerate the equality of women. The day was first celebrated in 1911.