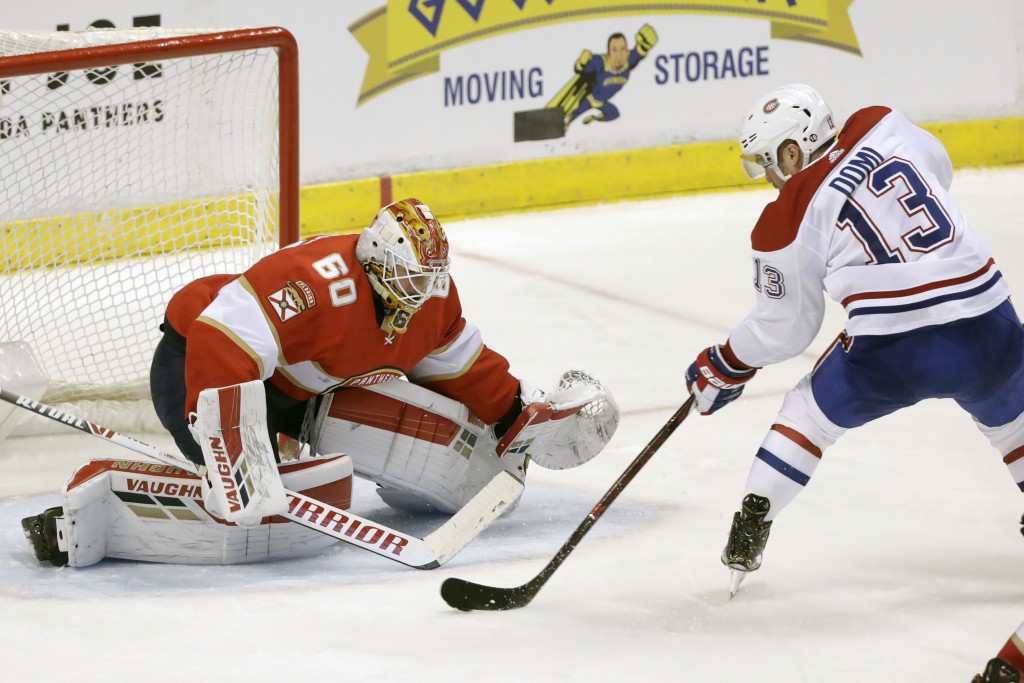 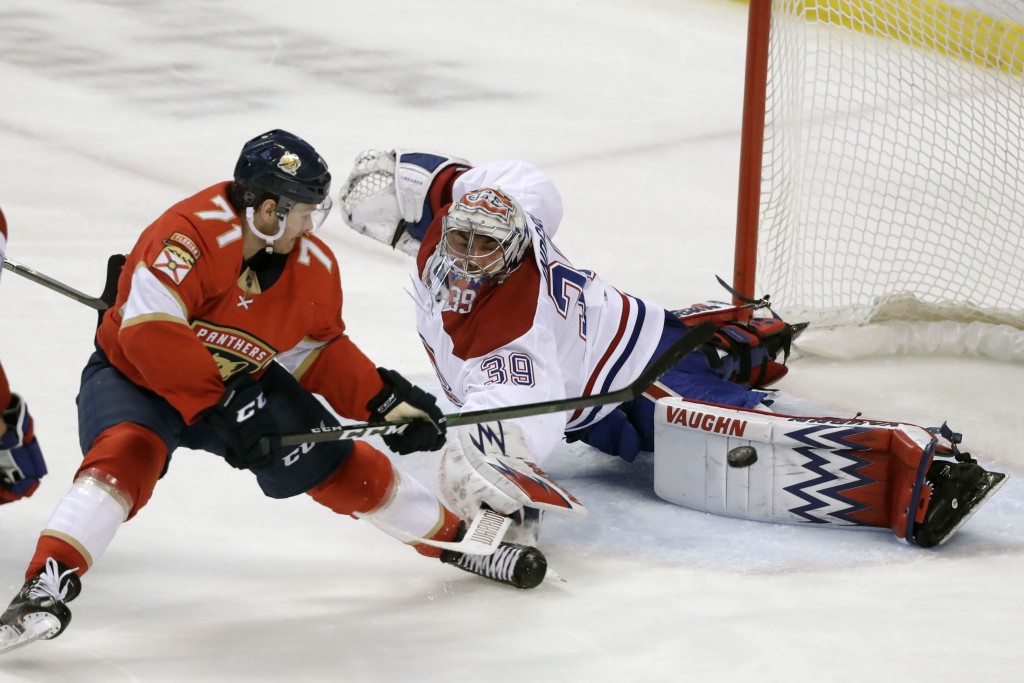 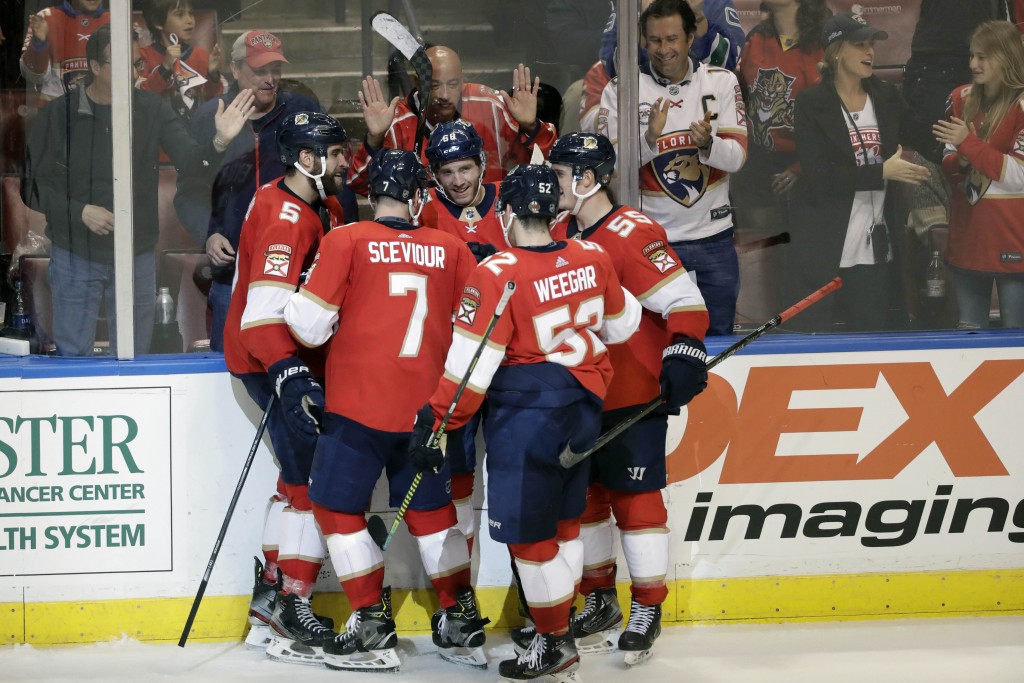 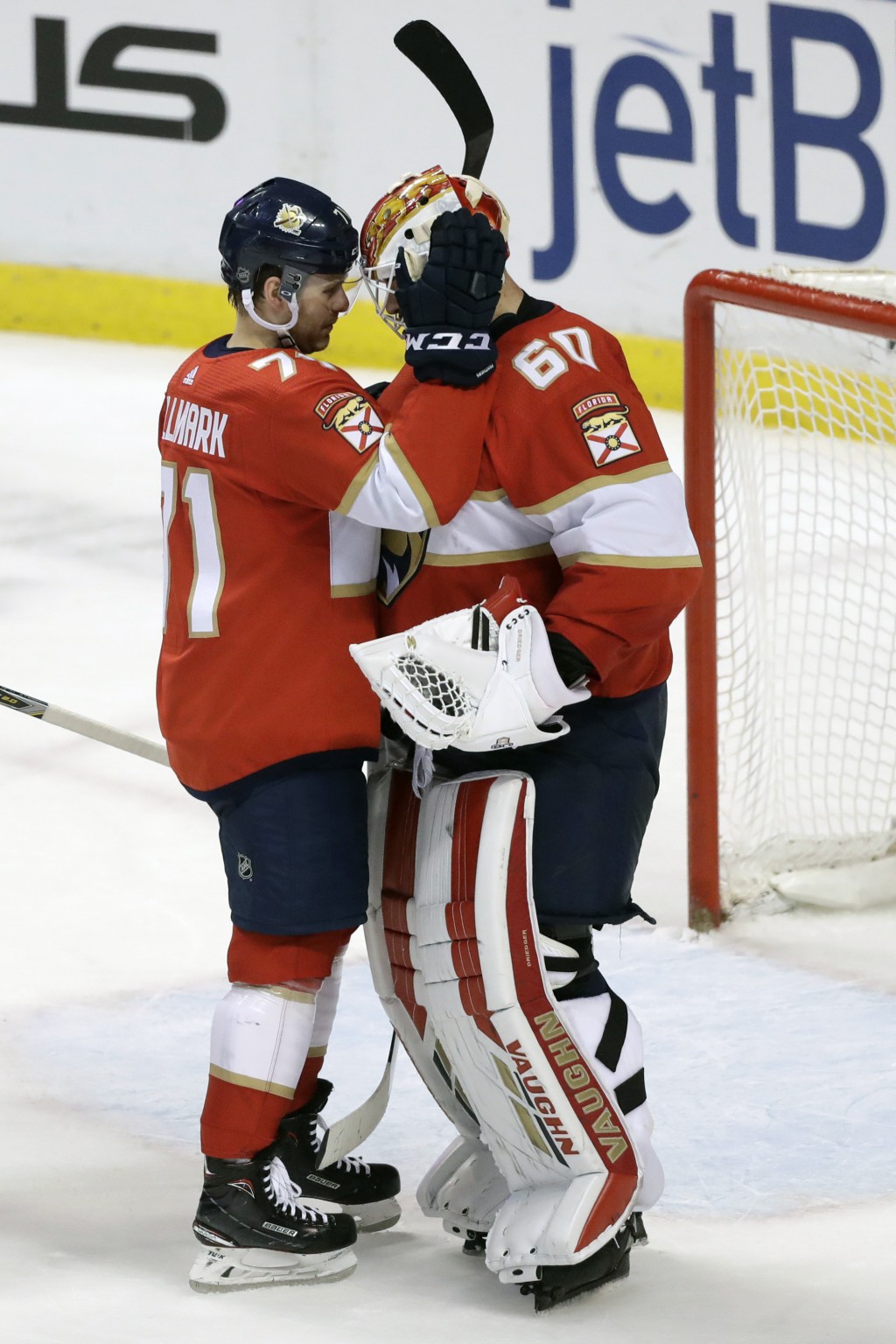 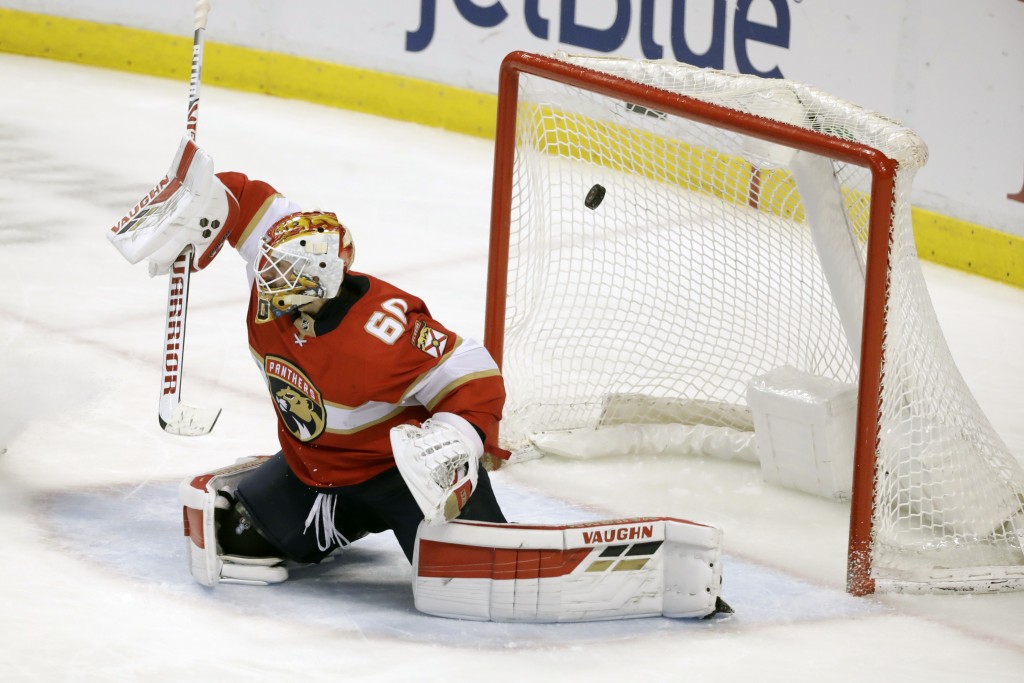 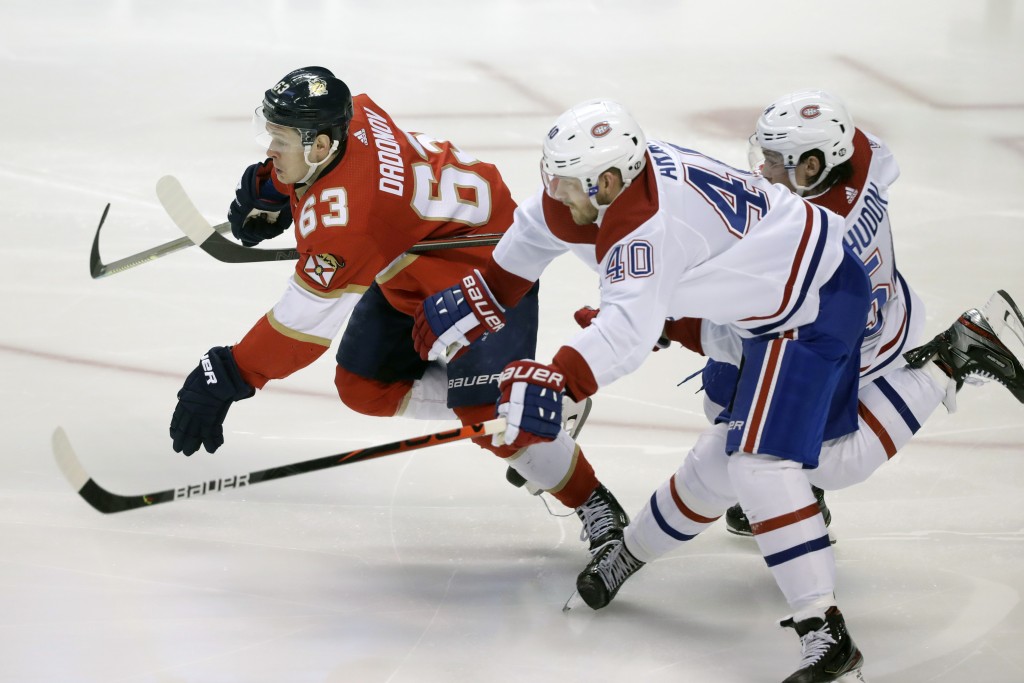 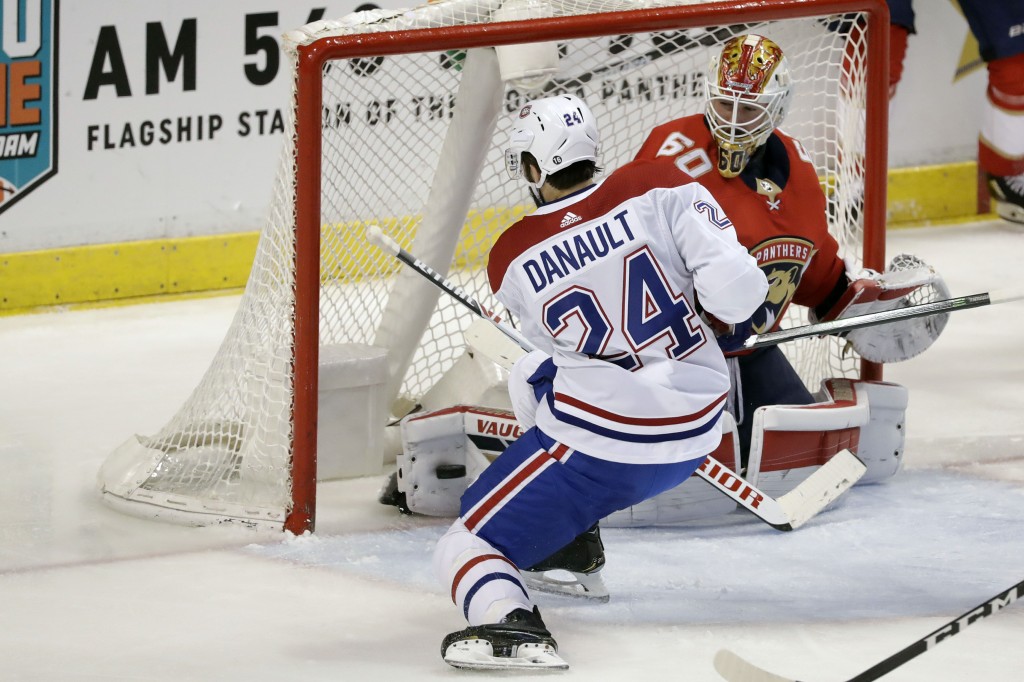 SUNRISE, Fla. (AP) — Backup goalie Chris Driedger stopped 33 shots, Mike Hoffman had a goal and an assist, and the Florida Panthers broke their eight-game home losing streak Saturday with a 4-1 win over the Montreal Canadiens.

On a night when Roberto Luongo's number was retired, the former Florida goalie gave his team a pep talk during a pregame ceremony — and the Panthers took it to heart.

“We have to believe in ourselves right now and enjoy the moment. Work your hearts out,” the 40-year-old Luongo told players, sitting behind him on the home bench, shortly before his No. 1 became the first Panthers jersey displayed in the arena’s rafters.

Lucas Wallmark, MacKenzie Weegar and Jonathan Huberdeau also scored for Florida. Aaron Ekblad had two assists for the Panthers, who are just 6-10-3 since the All-Star break.

The win moved Florida within three points of idle Toronto – which is third in the Atlantic Division – with the Panthers owning a game in hand. They are also three points out of a wild-card spot.

Making just his 14th NHL appearance, Driedger (6-2-1) made his best save by denying Max Domi on a breakaway at 4:37 of the second period.

Just after an unproductive Florida power play ended in the second, Wallmark broke the scoreless tie when Ekblad’s stretch pass was chipped near the offensive zone diagonally by Noel Acciari to Wallmark. The third-line Swedish center skated in unimpeded, faked a slap shot and roofed in a backhand for his 12th goal at 10:22.

Obtained from Carolina at the trade deadline, Wallmark notched his first goal for the Panthers in his sixth game. Ekblad’s helper gave him 10 assists in his last 12 matches.

Florida’s penalty kill gave the team a big boost when it killed off 2:50 of a four-minute, double-minor penalty by Dominic Toninato. Ekblad’s ensuing high-sticking infraction gave Montreal 1:10 of a 5-on-3 advantage, but the Panthers killed all three penalties.

Hoffman stole the puck in the defensive zone with Montreal’s net empty and blindly whipped in his 28th at 18:06 for the final margin.

NOTES: NHL Commissioner Gary Bettman spoke to the media during warmups about the coronavirus. “The locker room is an intimate environment. It may be best to have media accessibility at a podium for everybody’s health and safety, not just the players’ but yours,” he responded when asked about teams possibly closing locker rooms to the media. … Canadiens LW Tomas Tatar (upper body), the club’s top point producer, traveled back to Montreal and missed his second consecutive game. … Montreal wore No. 16 stickers to honor Canadiens great Henri Richard, who died at age 84 on Friday. Richard played his entire 20-season career with Montreal, won an NHL-record 11 Stanley Cups and was elected into the Hockey Hall of Fame in 1979. … The teams’ No. 1 goalies – Montreal’s Carey Price and Florida’s Sergei Bobrovsky – did not play. Price (coach’s decision) missed just his second game in the past 15, while Bobrovsky (lower body) was out for his second straight.