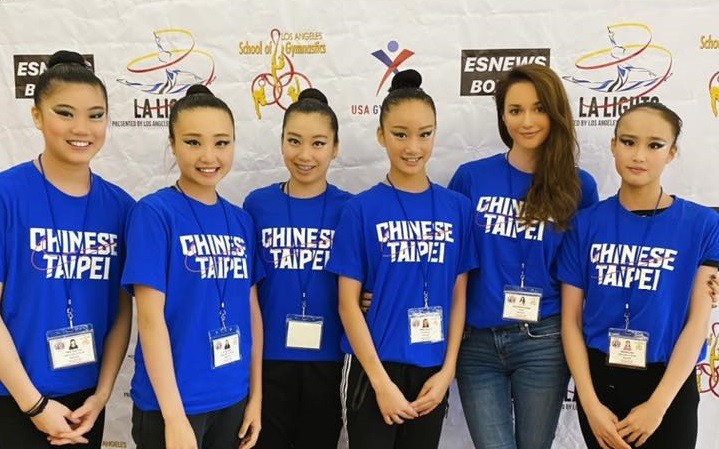 TAIPEI (Taiwan News) — The Ukrainian-born actress Larisa Bakurova has criticized New Taipei City Government for taking credit for the success of a rhythmic gymnastics team she coached, but the city government has denied the accusation.

Bakurova said via Facebook on Thursday (Mar. 5) that she had made several requests over the past year to meet New Taipei Mayor Hou You-Yi (侯友宜) to discuss how to promote the sport. She said the members of the team she has been coaching are not from New Taipei City and that the city government had not offered any help when they participated in an international competition in the U.S. in January.

The model-turned-actress was a professional gymnast before entering the fashion industry. Bakurova acquired Taiwanese citizenship in 2013.

“I would like to take this opportunity to express thankfulness to those who actually helped us during the process: the head of the Sports Administration, China Airlines, and all those who have supported us,” said Bakurova. She added that she still looked forward to discussing with government officials how to promote rhythmic gymnastics in New Taipei City.

Bakurova’s post came after the city government issued a press statement on Thursday about the gymnastic team’s success at the L.A. Lights Tournament 2020 earlier this year. The team took one gold and three bronze medals in the team and individual competitions, respectively.

The statement mentioned that Bakurova was an award-winning rhythmic gymnast in her teens. It said Bakurova had coached the team and covered the cost of traveling to the U.S. for the tournaments.

Jiang Chi-wei (蔣志薇), commissioner of the information bureau told CNA that Bakurova messaged Hou in August after he had shared a video the city government had filmed of Bakurova. This was part of a project to promote 30 distinguished women based in the city.

The city government officials reached out to Bakurova’s agent to discuss possible collaborations without receiving any reply, and eventually, her agent declined a meeting by saying “There is no need for the time being,” said Jiang. She added she was surprised to see Bakurova’s post.