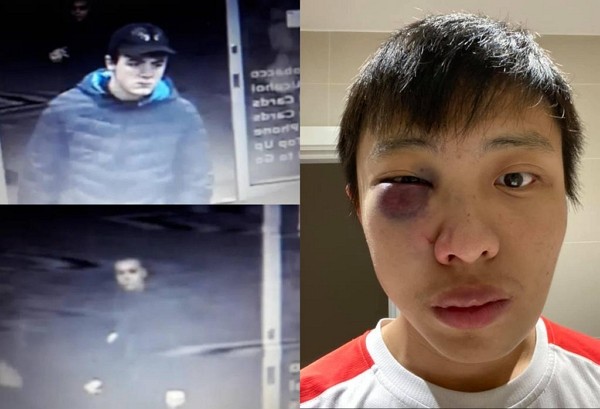 TAIPEI (Taiwan News) — A 23-year-old student from Singapore was assaulted on a London street by four thugs who shouted "coronavirus" at him, according to New Talk, which cited information made public by the Metropolitan Police Service on Thursday (March 5).

Jonathan Mok, who has been living in London for two years, said he was targeted because of his Chinese ethnicity. He recalled that he was walking along Oxford Street in London when he heard a racist comment, including the term "coronavirus," coming from a group of men and one woman.

Mok said he was punched in the face twice, while another man attempted to kick him before he could react. He also heard a man say, "I don't want your coronavirus in my country" before being punched again, his blood splattering all over the pavement.

London's Metropolitan Police Service said on Thursday the "racially aggravated" incident occurred Feb. 24 and released surveillance footage of the individuals responsible for the attack. The police said they are still trying to locate the suspects and asked witnesses to come forward.

After consulting a doctor, Mok said he was told that reconstructive surgery might be necessary for the fractures to his face. He also shared his story on Facebook, hoping to raise awareness about increasing xenophobia in the U.K. and around the world.

Mok said the hostility towards East Asians is not a product of the recent Wuhan coronavirus (COVID-19) outbreak, but a deep-seated xenophobia that has been exposed. He emphasized the new disease is merely an excuse for racists to exercise their violence and spread hatred, reported UDN. Surveillance footage of the men responsible for assault on Mok. (London Police photo)