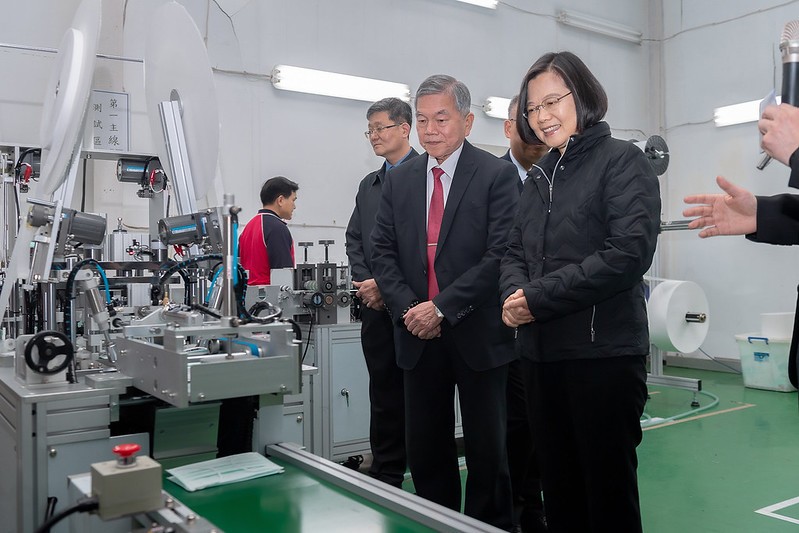 TAIPEI (Taiwan News) – A government project to set up 60 face mask production lines in a month has been accomplished ahead of schedule, and 15 firms taking up manufacturing are expected to produce six million masks on a daily basis to meet strong demand due to the coronavirus (COVID-19).

President Tsai Ing-wen (蔡英文) visited the factory on Thursday (March 5) where more than 100 managers and technicians from 26 Taiwan machine tool enterprises had scrambled to assemble the production lines for the past month. Tsai commended the “national team” for reflecting the Taiwanese spirit, saying that "when facing challenges, Taiwanese will set aside competition and work together.”

The 60 production lines, which normally take from four to six months to complete, were set up in 25 days — before the scheduled one-month deadline. The 15 manufacturers will produce a total of 72 million face masks for the government in exchange for the machinery.

The government has banned the export of face masks since January, and the island nation’s existing manufacturers can produce four million face masks a day. With the new production lines starting operation, the number of masks produced in Taiwan is expected to reach 10 million daily by mid-March.

Currently, adults are allowed to buy three face masks and children five masks a week due to the government’s rationing system. A senior health official said this week at a legislative session that with mask production increased, the adult ration could rise to five masks a week.

The achievement is not a miracle, but the result of unity and hard work by Taiwanese, said Tsai via Facebook on Thursday. The country’s policy efforts to deal with the coronavirus have helped the world recognize Taiwan’s strength and its national power, she said, adding she is very proud of being Taiwanese and the chief of state.

Tsai also expressed gratitude to the executives of the machine tool companies involved in the project. “I am grateful for the efforts of these people, which made Taiwanese feel relieved,” she said.

The government drew up a budget of NT$200 million (US$6.6 million) to build 60 face mask production lines — an investment that Tsai described as “strategic relief.” The production of face masks in Taiwan should suffice to meet the country’s need whenever there is an epidemic threat, Tsai added.

The Ministry of Economic Affairs, which administered the project, said via Facebook that many had doubted the government’s plan to build 60 production lines within a month. However, the teamwork of private firms, business associations, and the government and its related institutes had made the impossible possible.

The ministry plans to increase mask production with a further 30 lines and has budgeted NT$90 million up to the end of March. The hope is to raise daily production to 12 million masks.