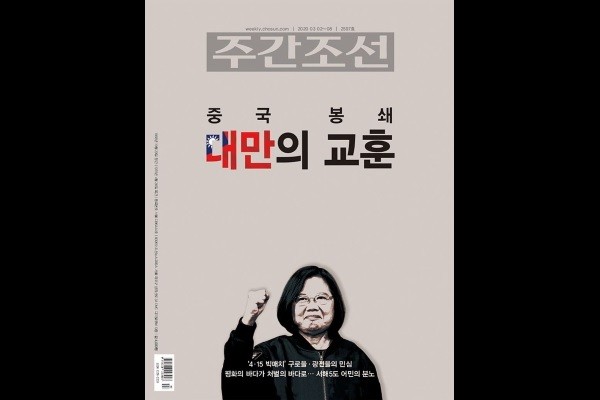 The latest issue of the weekly magazine, which placed Tsai on the cover with a clenched fist, introduces Taiwan's epidemic prevention policies, the differences between masks used there and in South Korea, its exit and entry controls, and its policy towards Communist China. The article lauds the abilities of the Health Minister and Central Epidemic Command Center (CECC) head Chen Shih-chung (陳時中) who has contributed to Taiwan's superior handling of the crisis in comparison with South Korea.

On the cover of Issue No. 2597 of the magazine, which was founded in 1968, are the words "Blockage China — Learn from Taiwan." Inside, the article expounds on the details of Taiwan's epidemic prevention policy since the start of the outbreak.

In a summary of the article on its website, the magazine wrote that "Taiwan's trade volume with China is similar to that of South Korea, but its epidemic prevention policy is completely opposite."

As the old saying goes, the proof is in the pudding. While the number of confirmed COVID-19 cases in South Korea stands at 5,766, including 36 deaths, Taiwan is only reporting 42 confirmed cases and one death. The article states that although the South Korean government quickly responded to the outbreak of the disease and provided a large amount of medical resources, there are still many questions about its decision to continue exporting masks and its policy toward the entry and exit of travelers, reported CNA.

The article lays out Taiwan's relevant actions after the outbreak of the Wuhan coronavirus and takes note of the differences between Taiwan and South Korea's policies, including Taiwan's moratorium on the export of masks one month ahead of South Korea's. The article also contrasts the differing approaches of the two countries when it comes to the prioritization of domestic epidemic prevention policy, the disclosure of travel histories of confirmed patients, and restrictions on inbound tourists from China.

It pointed out that South Korea's trade volume with China in 2018 was US$243.4 billion, which is similar to Taiwan's US$226.2 billion. However, with regard to per capita trade volume, Taiwan's is far higher than South Korea's, and despite this in terms of its epidemic prevention policy, Taiwan took a far stricter stance with China, according to the report.

Since Feb. 7, Taiwan began banning foreign tourists who had been to China, Hong Kong, and Macao within 14 days and requiring those who had already arrived to undergo home quarantine home for 14 days or face stiff fines. Yet the South Korean government did not implement any entry restrictions for tourists from parts of China outside of Wuhan, and it has been criticized for "opening doors and catching mosquitoes just for show."

The article concludes that "The abilities of the commanders account for the differences between Taiwan and South Korea seen today."