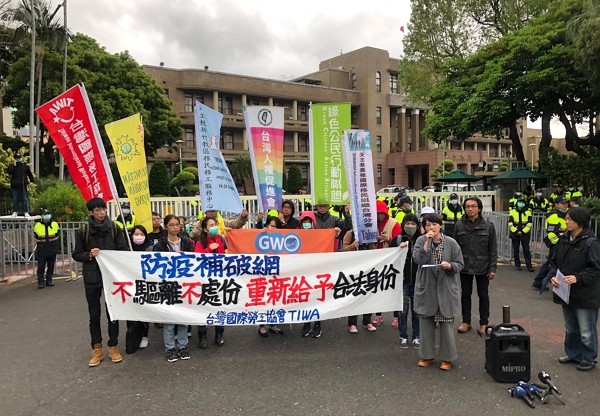 Several organizations called for an amnesty for illegal migrant workers in Taiwan on Wednesday (March 4), saying that excluding them from the epidemic prevention system amid the COVID-19 coronavirus outbreak represents a potentially dangerous oversight that undermine efforts to stop the spread of the virus.

At a press conference in front of the Legislative Yuan, the Taiwan International Workers' Association (TIWA), amongst others, urged the government not to deport or fine undocumented workers in Taiwan, and to grant them legal status.

Only through these measures can the gap in the epidemic prevention system be fixed, the organizations said.

The groups were responding to concerns that the nearly 50,000 illegal migrant workers in Taiwan represent a serious loophole in the epidemic prevention system, after an undocumented Indonesian female caregiver was confirmed as Taiwan's 32nd COVID-19 patient.

Following her diagnosis, the Ministry of Labor (MOL) sent an official document to New Taipei City government instructing the city to investigate the case, which some interpreted as a sign the government is cracking down on illegal workers.

Although the MOL has said the document was simply an administrative procedure, not a crackdown, migrant rights groups have continued to call for an amnesty for undocumented workers so they can seek treatment without fear of deportation during the epidemic.

Chen Hsiu-lien (陳秀蓮), a member of the TIWA, said at the Wednesday press conference that during an outbreak, everyone needs to be included in the epidemic prevention system, regardless of their legal status.

Taiwan's policies towards undocumented migrant workers, which are limited to deportation, fines, and prohibiting them from being given legal status, Chen said, ensure that even if these individuals have symptoms of COVID-19, they would rather take their chances than seek treatment.

The MOL and National Immigration Agency should immediately cancel punishments against illegal migrant workers so they can be included in epidemic prevention measures, Chen said.

Huang Tzu-hua (黃姿華), a representative of a caregivers' union based in Taoyuan, said at the press conference that without a national health insurance (NHI) card, undocumented workers are unable to buy masks under the government rationing system, and are therefore already at higher risk of exposure to the virus.

She urged the government to review its policies towards these workers and to grant them an opportunity to work legally.

Other organizations at the press conference included the Taiwan Association for Human Rights, the Green Citizens' Action Alliance and the Global Workers' Organization, Taiwan.

In response to the organizations' demands, the MOL said illegal migrant workers are in violation of the Employment Service Act and the Immigration Act, and if discovered, are deported and barred from working in Taiwan again.

For an amnesty to be granted to undocumented migrant workers, the law would need to be amended, which requires a consensus in society, the ministry added.

During the COVID-19 outbreak, the MOL will cooperate fully with the Central Epidemic Command Center in promoting epidemic prevention measures to migrant workers, and will continue to focus on encouraging illegal workers to turn themselves in instead of launching a crackdown, the ministry said.

The MOL has posted information on COVID-19 in English, Vietnamese, Chinese, Thai, and Indonesian on its website to prevent migrant workers from becoming a loophole in prevention efforts, it said.

When asked about the issue Wednesday, Minister of the Interior Hsu Kuo-yung (徐國勇) said that the ministry will focus its efforts on encouraging illegal migrant workers to turn themselves in.

As to whether such workers could be granted legal status, Hsu said "the law is the law," and they will be dealt with accordingly.

According to National Immigration Agency statistics, there are 48,545 undocumented migrant workers in Taiwan, with 290 in detention centers as of the end of January.