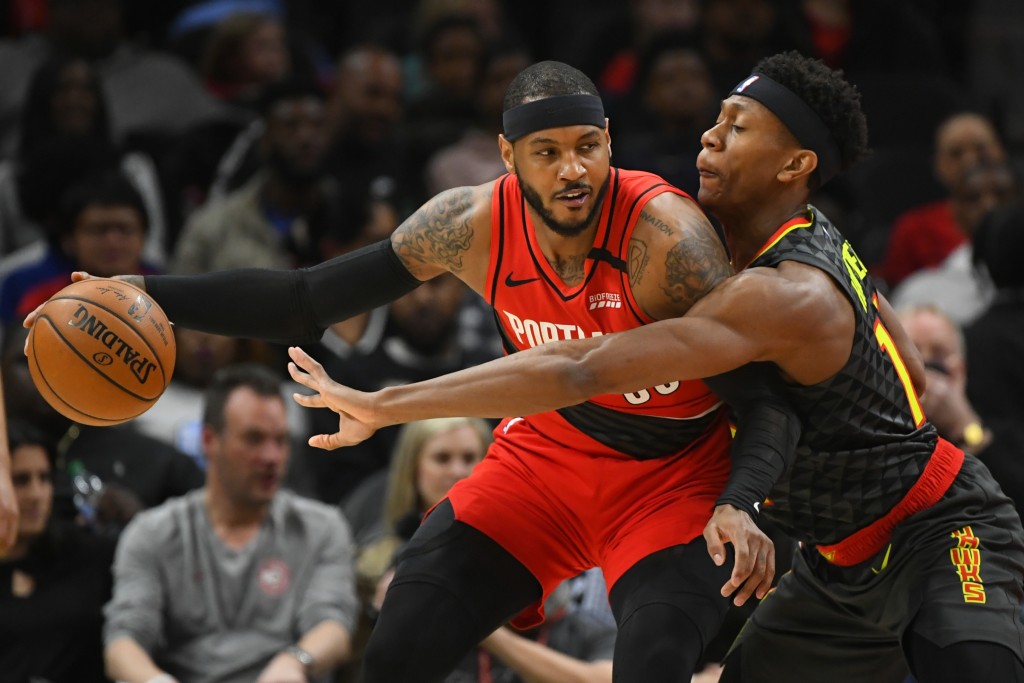 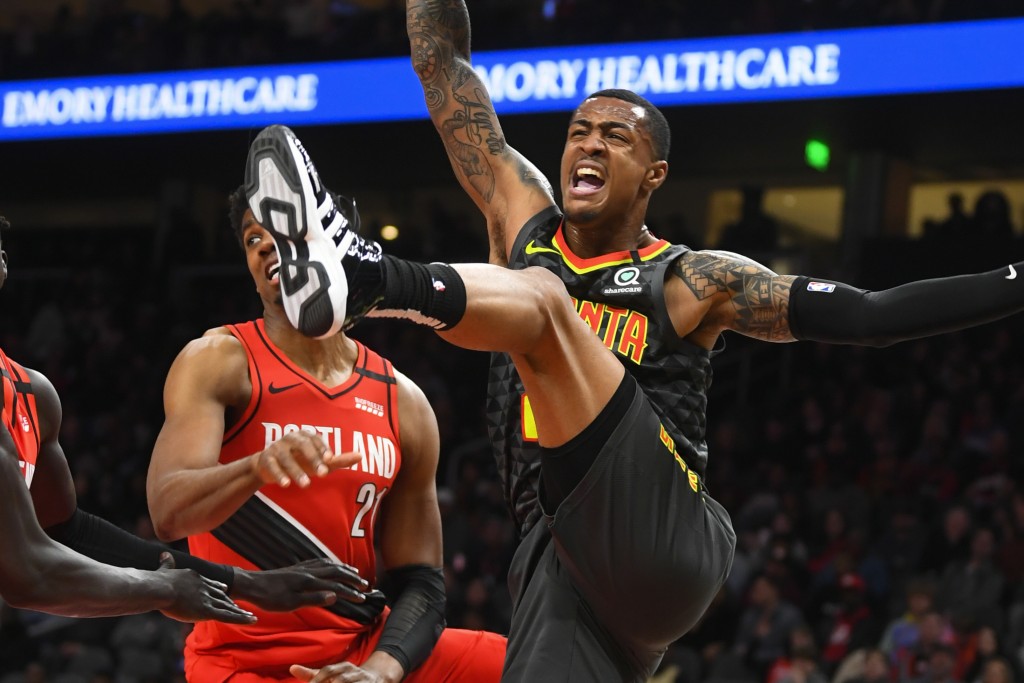 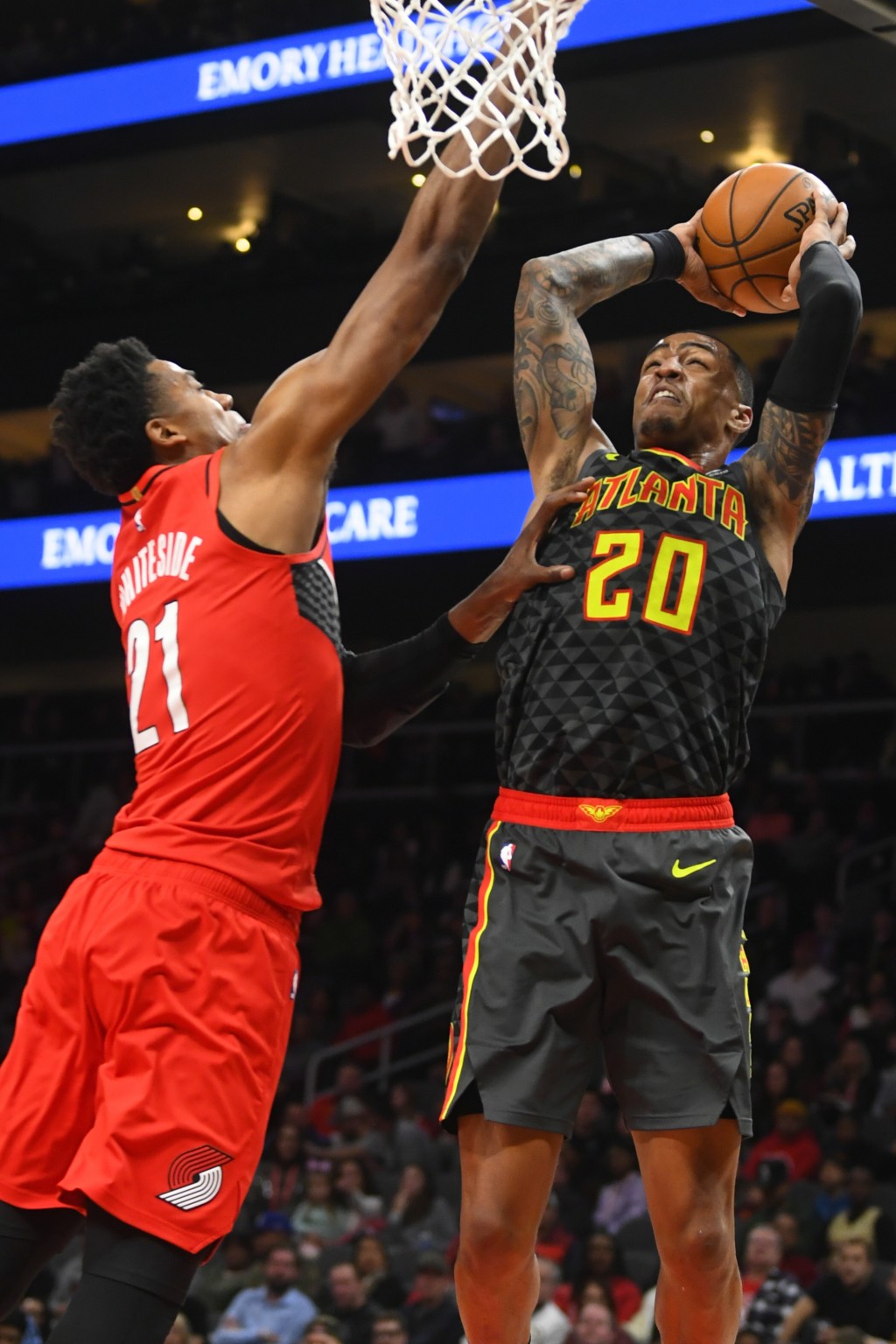 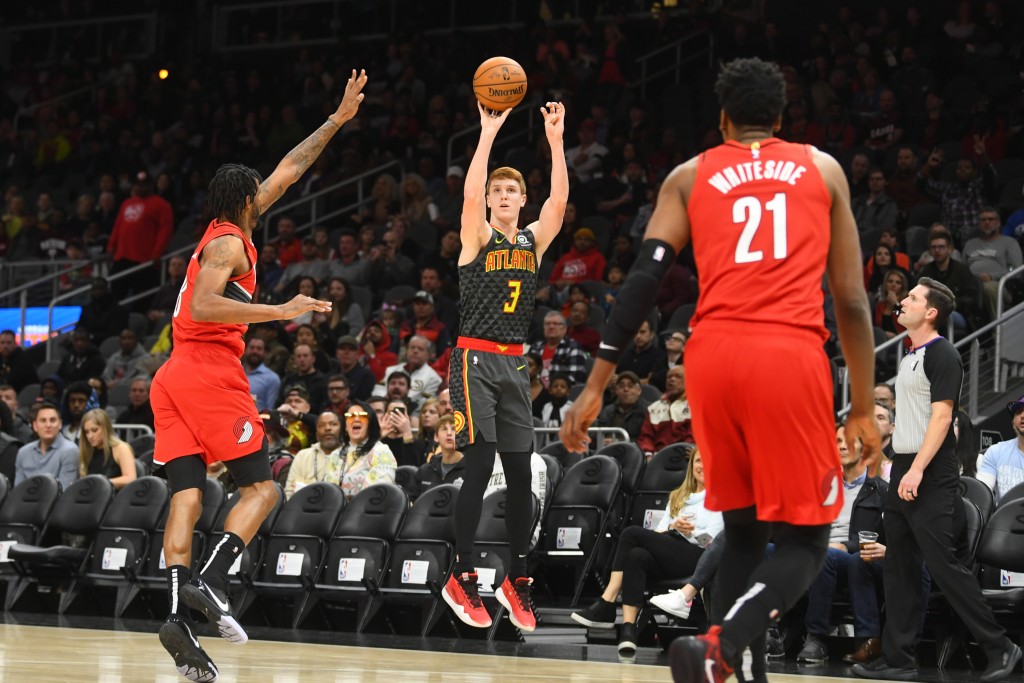 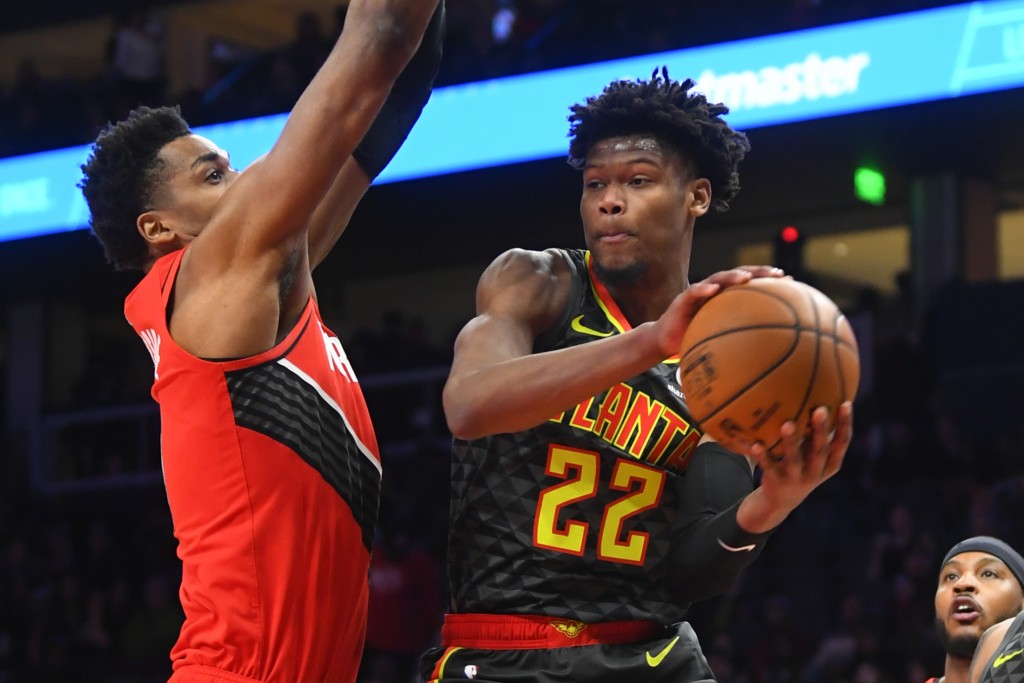 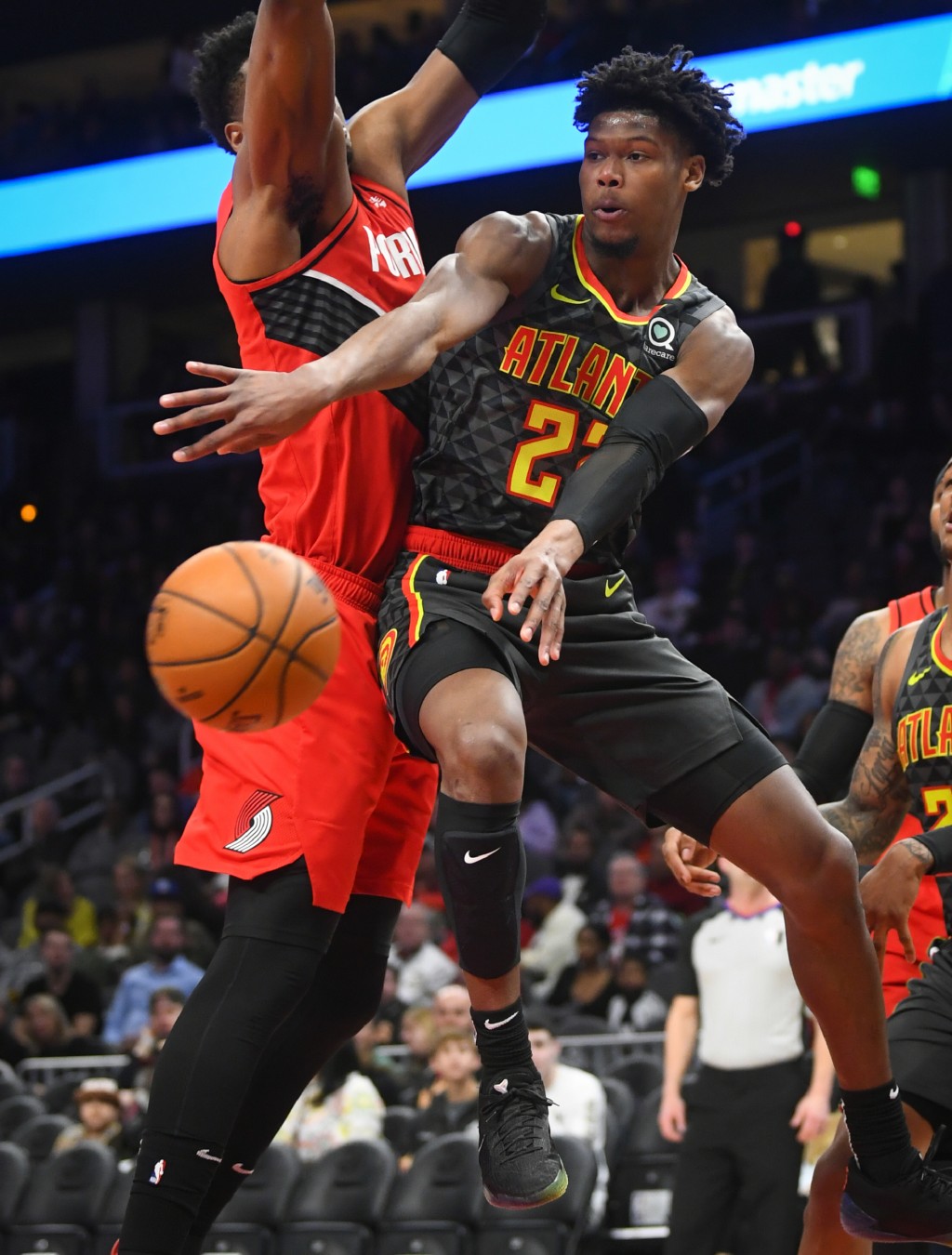 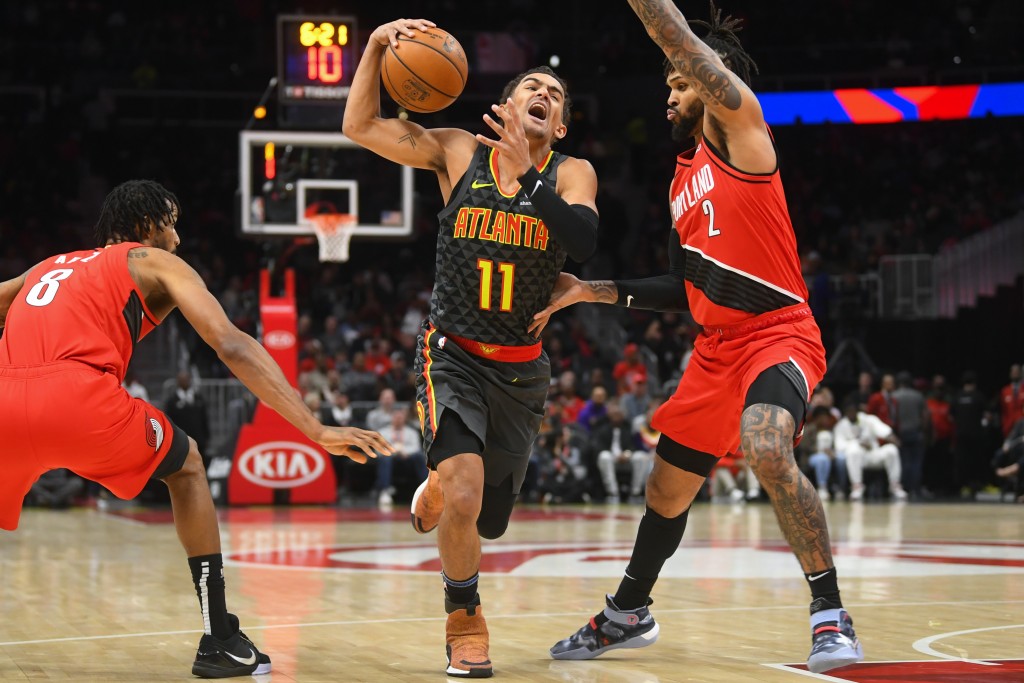 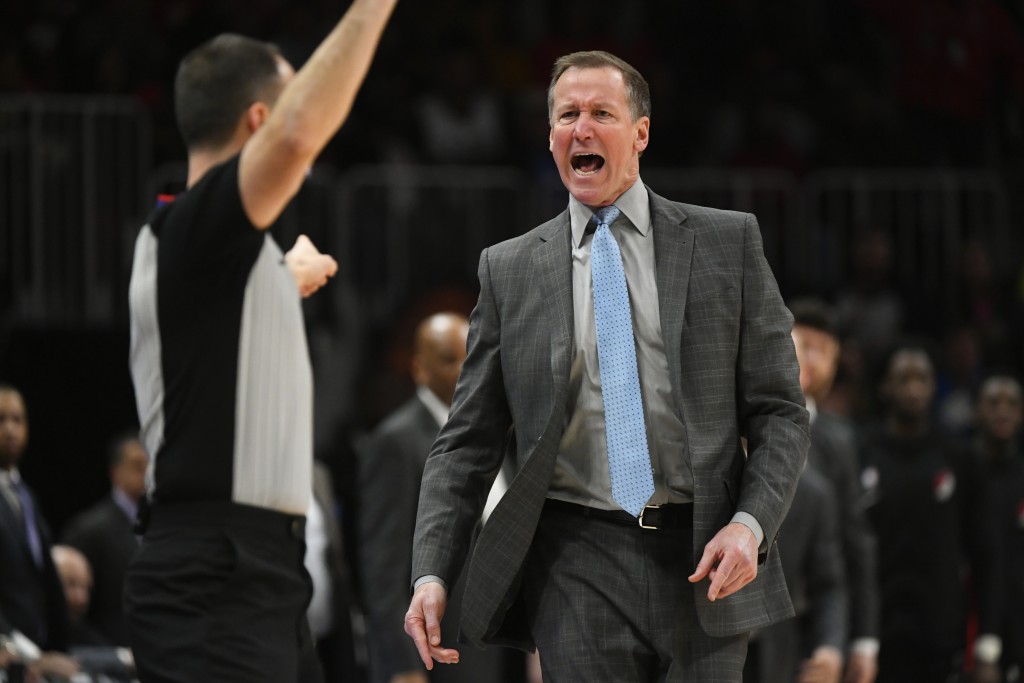 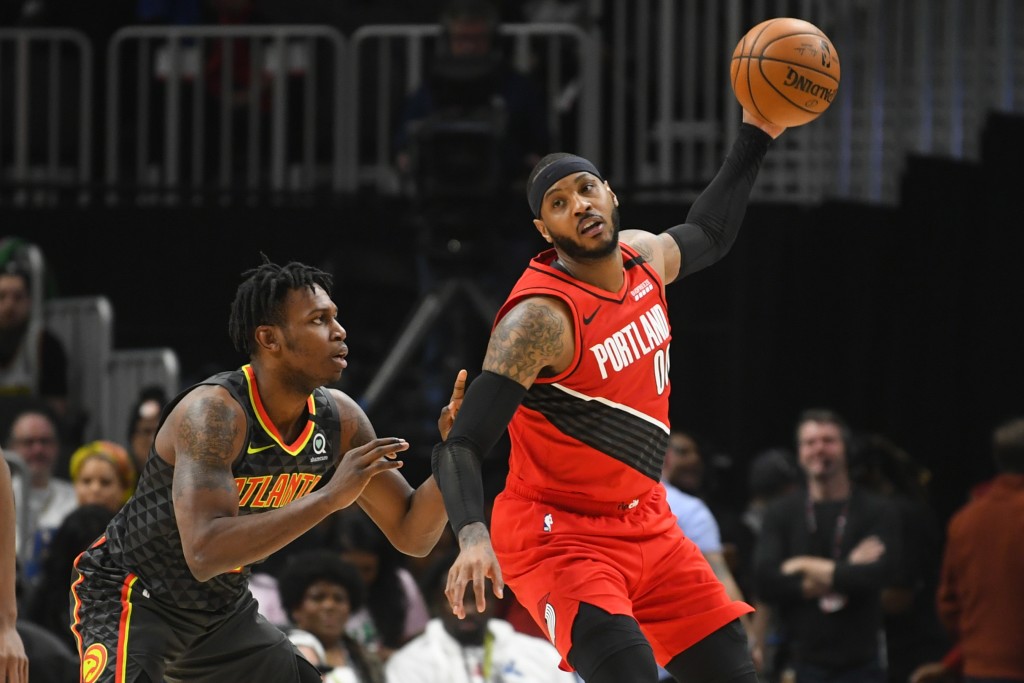 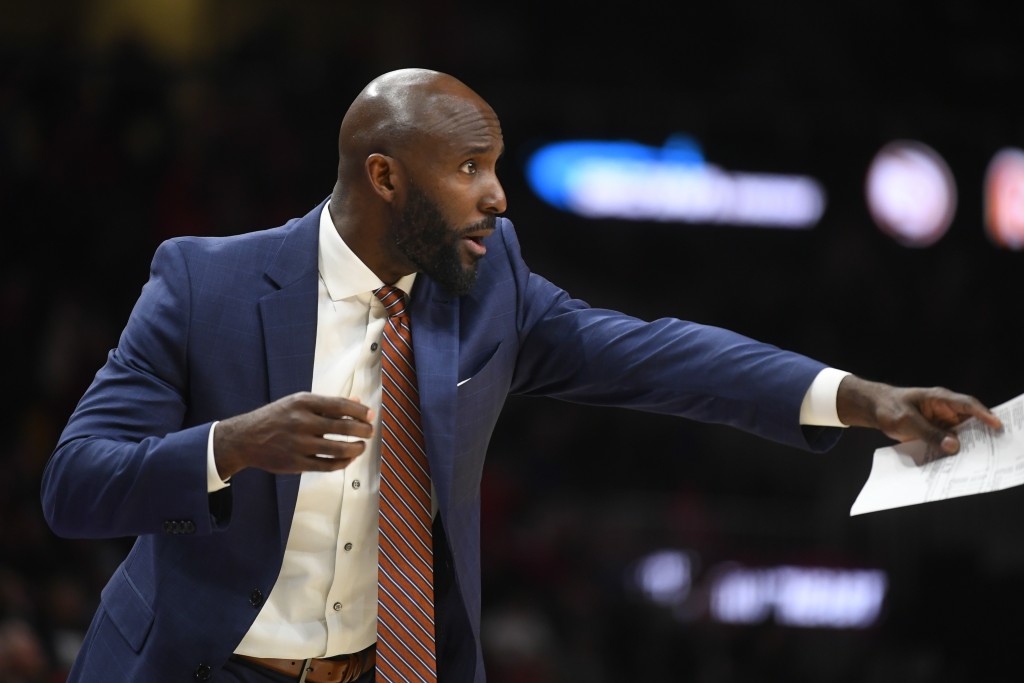 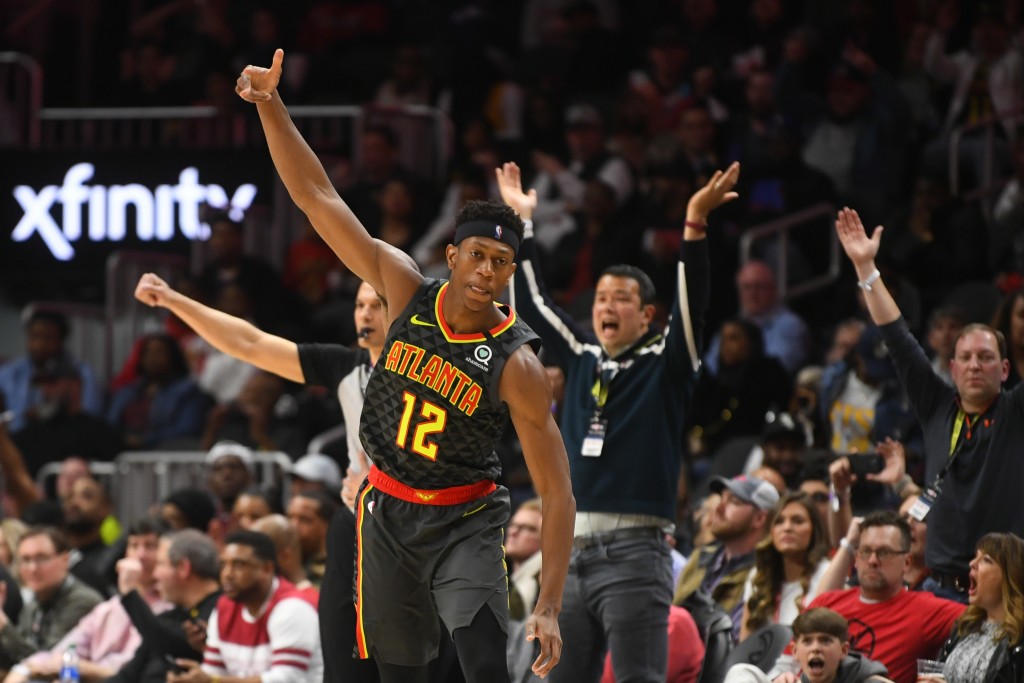 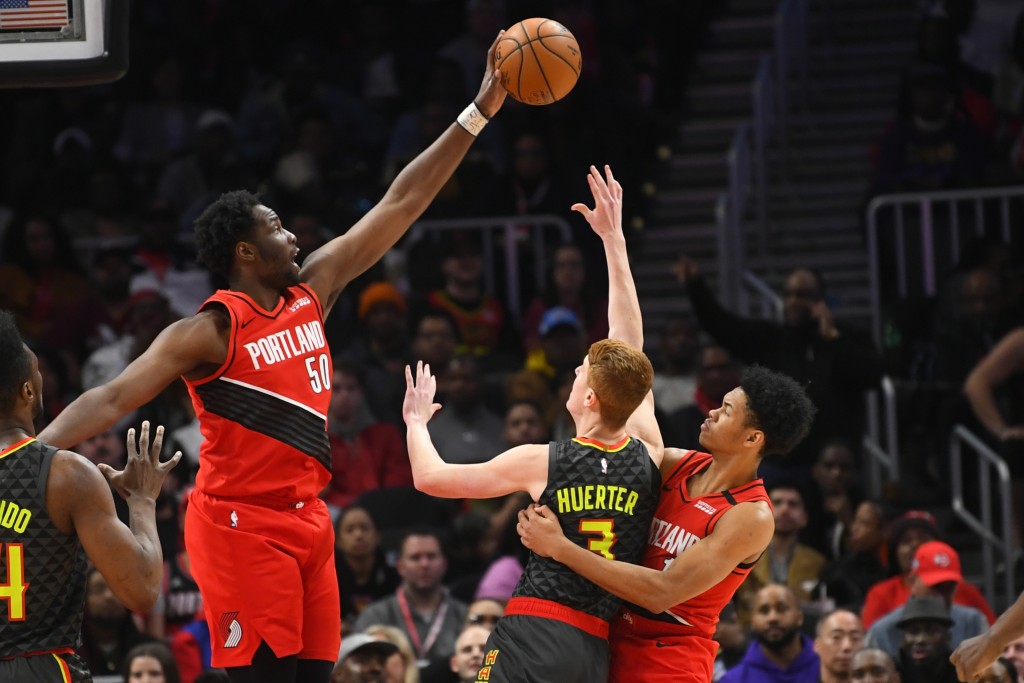 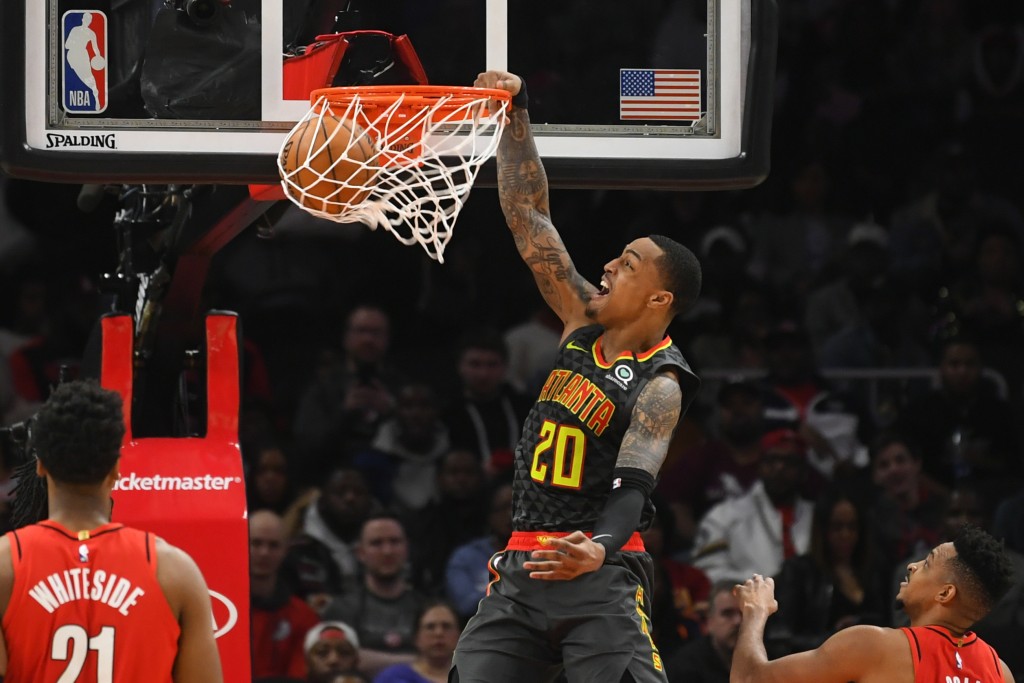 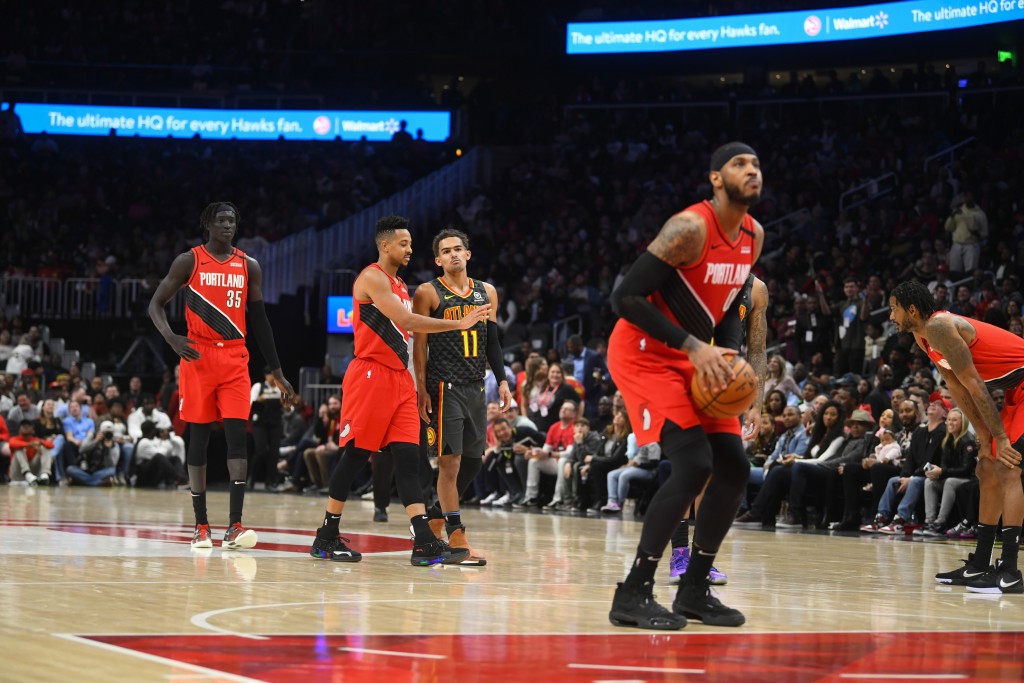 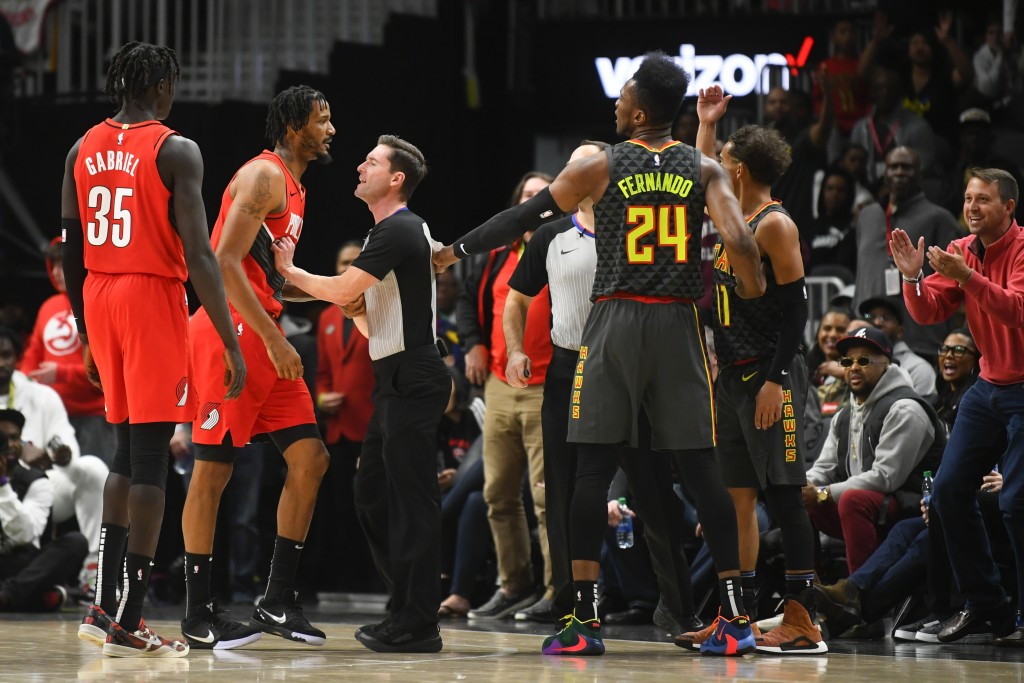 ATLANTA (AP) — Coach Lloyd Pierce has always known that part of the Atlanta Hawks' problem shooting 3-pointers is a lack of ball movement.

Over the last two games, Pierce has seen a promising turnaround,

“It's pretty special now," Pierce said. “Consistency is the key. Can we keep it up? Can we continue to share the basketball and move the basketball that way? But what a great effort by our guys tonight."

Trae Young had 25 points and 15 assists, John Collins added 24 points and 10 rebounds and the Hawks beat the Portland Trail Blazers 129-117 on Saturday night for their second straight victory.

Atlanta, the NBA's worst 3-point shooting team this season, dazzled beyond the arc for the second night in a row. The Hawks shot 42.9% on 42 attempts and have 37 treys in two games. De'Andre Hunter picked up where fellow rookie Cam Reddish left off the night before against Brooklyn, hitting six 3s and scoring 22 points.

CJ McCollum finished with 35 points and Hassan Whiteside had 21 points and 13 rebounds for the Trail Blazers. They were done for the night after Hunter and Collins hit consecutive 3s to make it a 16-point lead with 3:03 remaining.

Portland has dropped three straight and six of seven to fall nine games under .500. The Blazers, who began the night 10th in the Western Conference, tried a trapping defense against Young, the second-year All-Star point guard, but they couldn't account for his teammates.

“It’s part of the game plan to try to stop Trae Young and make some other guys beat us," McCollum said. “And they did tonight."

The rebuilding Hawks have been at or near the bottom of the NBA standings most of the season, but they have won eight of 10 at home and are looking more comfortable with a promising young nucleus of Young, Collins, Hunter, Reddish and Kevin Huerter.

Atlanta, winning on consecutive nights, took charge of the game during a chippy third quarter.

Collins had a one-handed putback, a three-point play and a straightaway 3 for an 82-69 advantage. Bruno Fernando's layup put the Hawks up 15 before the teams combined for two technical fouls and a flagrant foul as Atlanta pushed the lead to 20.

The teams also combined for 44 points off 35 turnovers.

Atlanta took its first lead since 7-6 when Young hit three free throws at the 4:50 mark of the second. Collins followed with a putback dunk, Hunter hit a 3 and Young hit a runner and two free throws to make it 55-48. Hunter and McCollum traded 3s in the closing seconds before halftime, and Atlanta led 63-56 entering the third.

“We had 28 assists at the end of the third quarter," Pierce said. “We had 32 last night in the game. We thought we were tremendous moving the basketball."

Blazers: All-Star G Damian Lillard, sidelined with a groin strain, will stay in Portland and not join the team Monday in Orlando. The team's leading scorer will miss at least six games in hopes of returning at Phoenix on Friday. ... Whiteside, who began the game ranked second in NBA rebounding, first in blocks and third in double-doubles, had his 46th double-double and needs nine to pass the franchise record that Mychal Thompson set in 1981-82.

Hawks: Reddish, coming off career-high 26 points the night before, finished with eight points. ... The team missed 10 of 11 shots during a stretch of the first quarter that helped Portland take a 19-11 lead. ... Atlanta missed 12 of its first 20 attempts beyond the arc.

Officials called two technical fouls and issued a flagrant foul during a nearly three-minute stretch of the third. Whiteside was whistled for a technical after getting fouled hard by Collins and likely said something inflammatory.

Ariza followed with a flagrant foul against Young along the right sideline, and Young gestured his disapproval without making eye contact. Young was then called for a technical after hitting an 11-foot floater, pushing the lead to 20, as he appeared to agitate Ariza.

“Just competitiveness," Young said. “I play with a smile on my face. I'm super excited when I play, but at the end of the day I'm still tough. I'm going to play hard. I'm competitive. It's fun to play that way, too, sometimes. It was good."

Portland coach Terry Stotts received a technical foul midway through the first when the Hawks weren't called for a foul on Ariza and followed with a corner 3 from Hunter. Stotts went to midcourt to yell at official Kane Fitzgerald, who quickly blew his whistle.