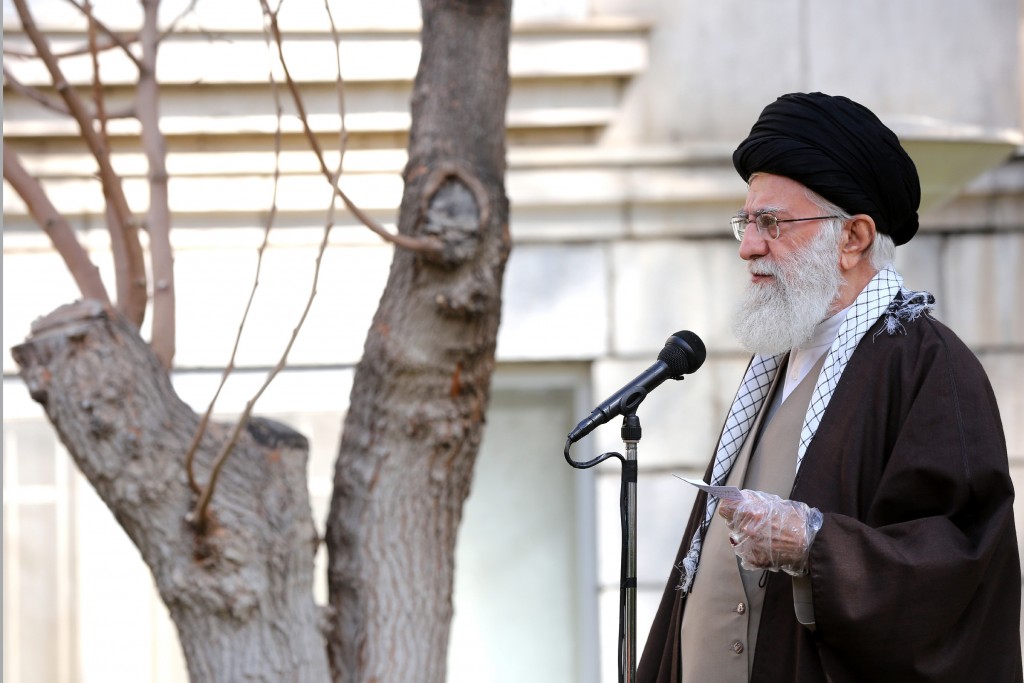 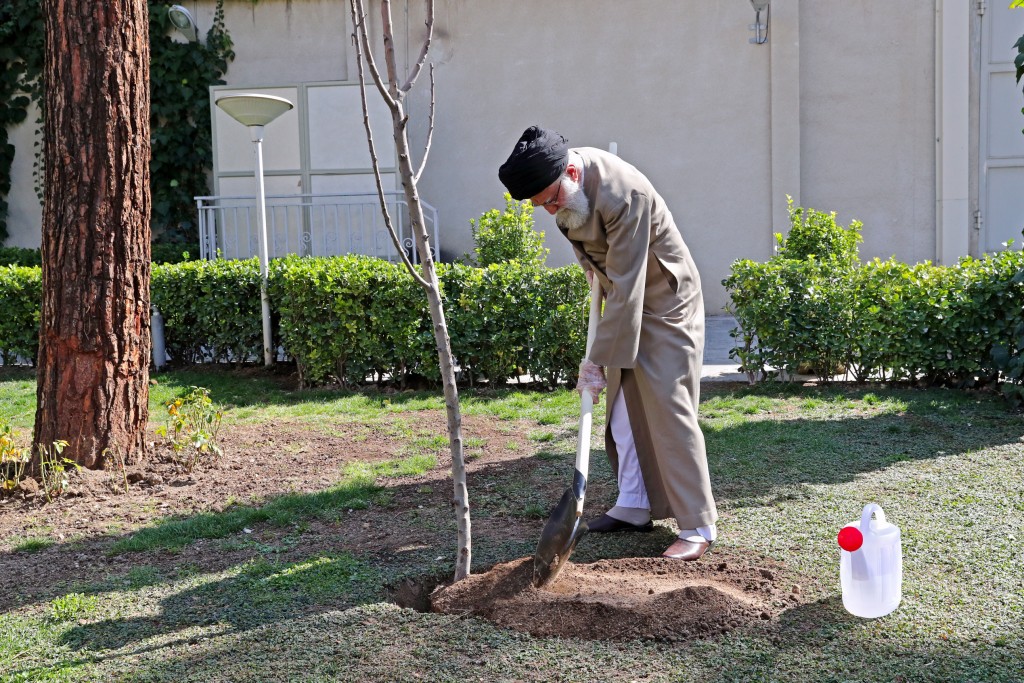 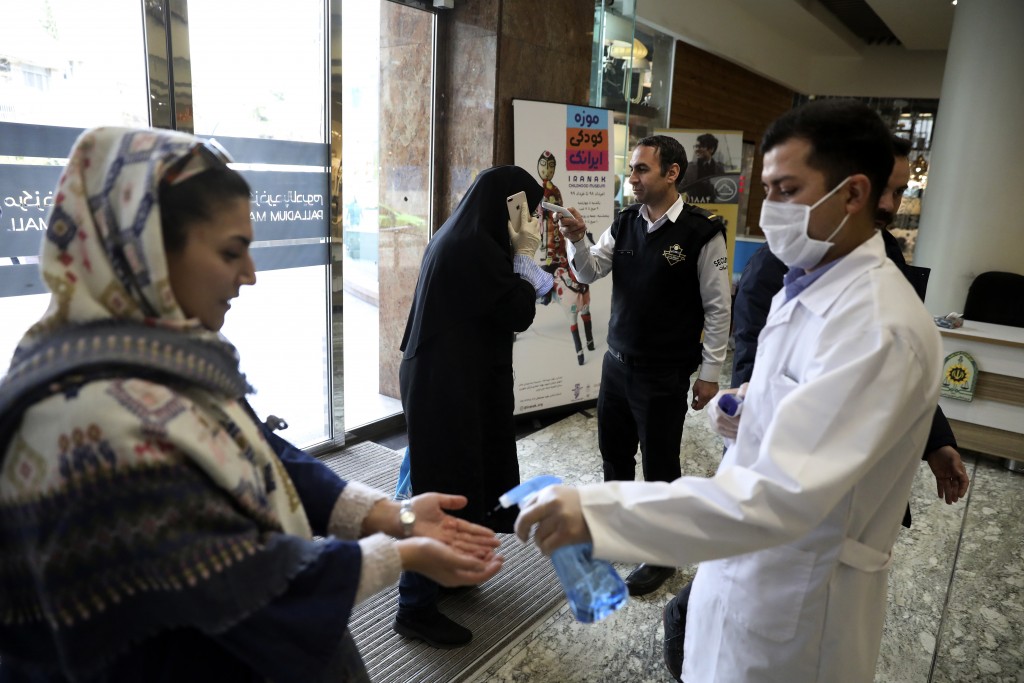 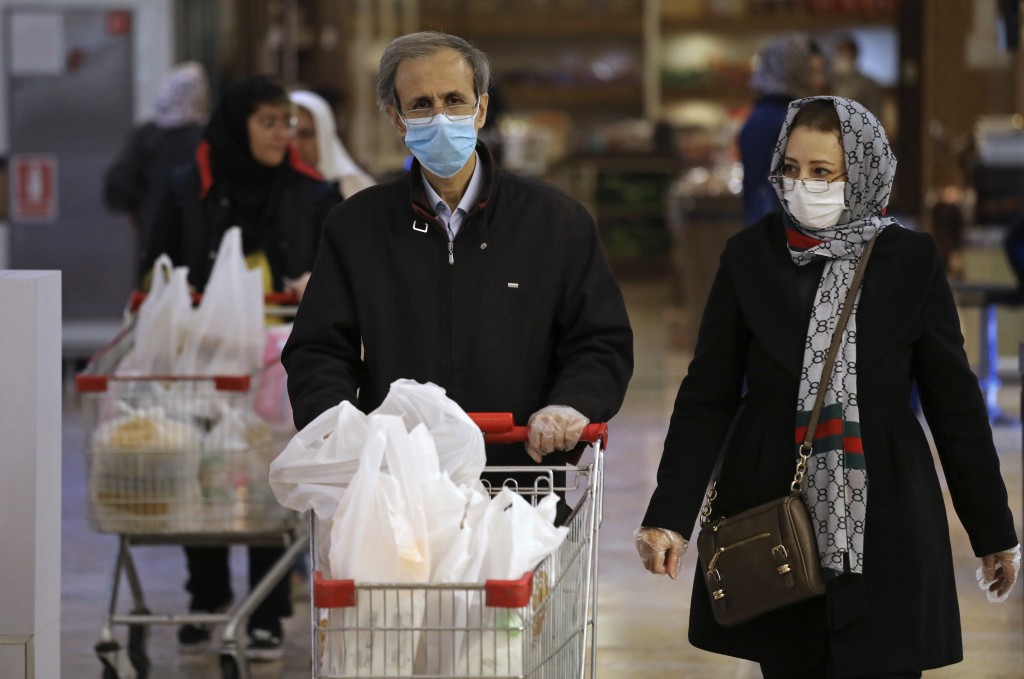 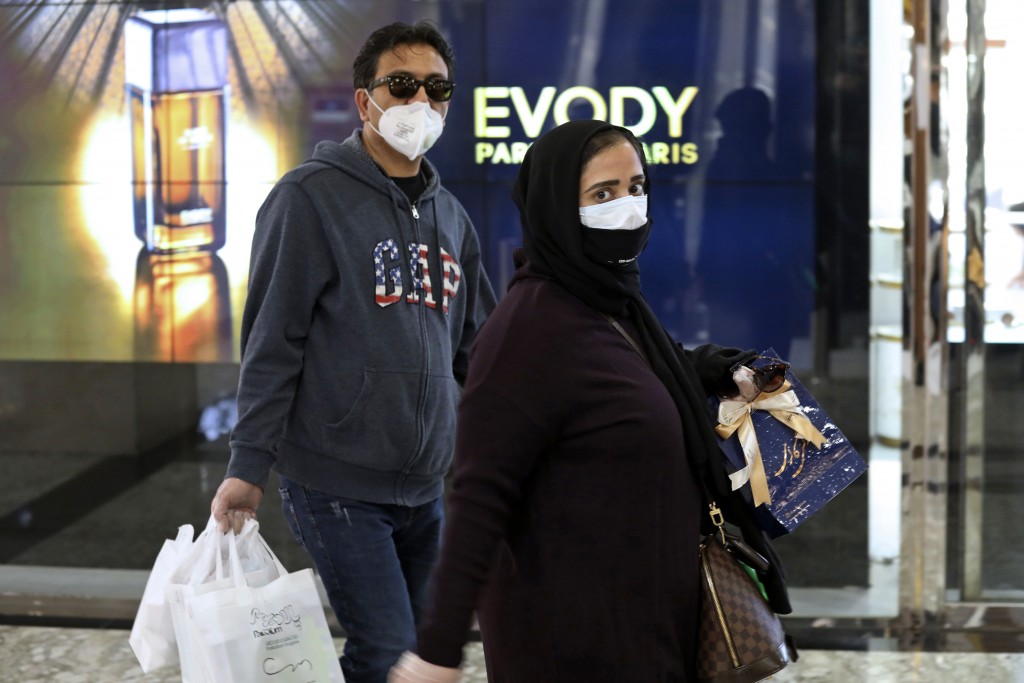 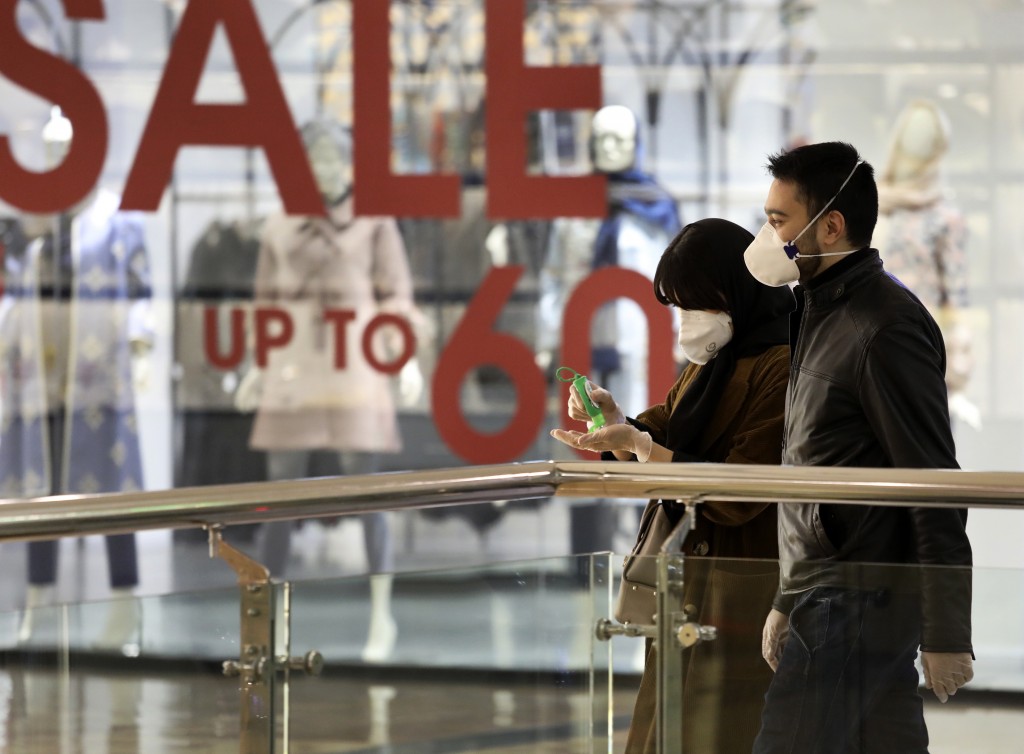 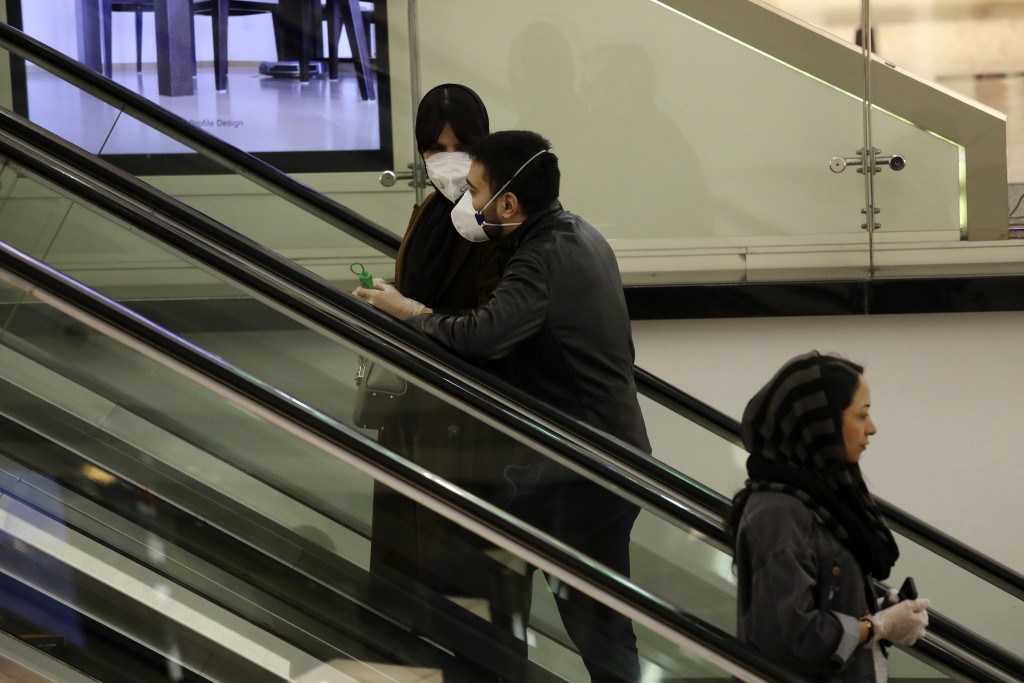 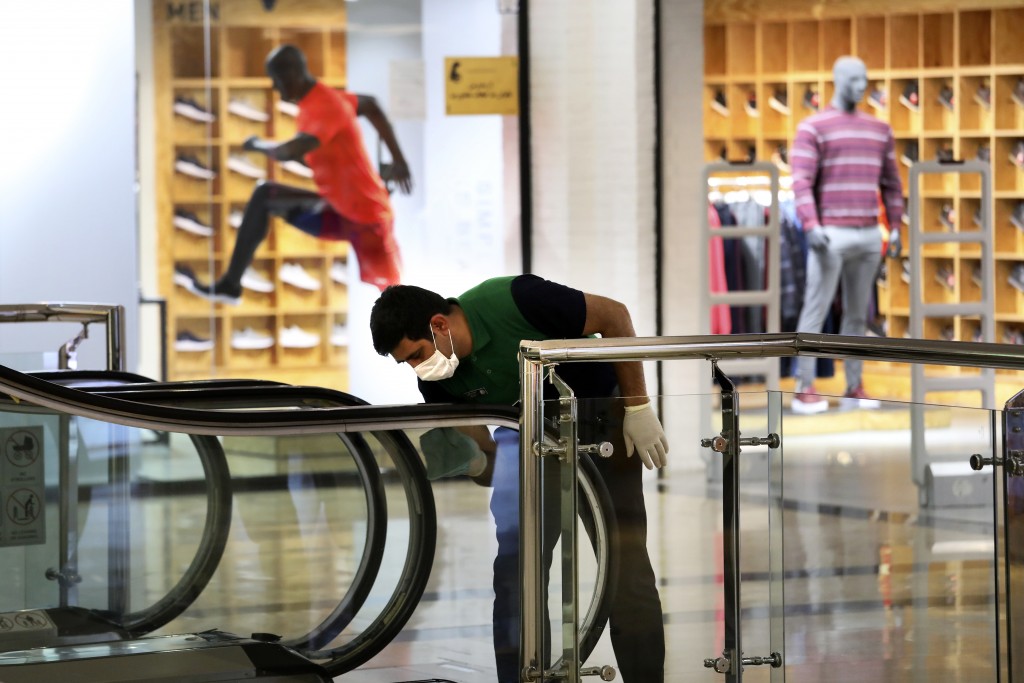 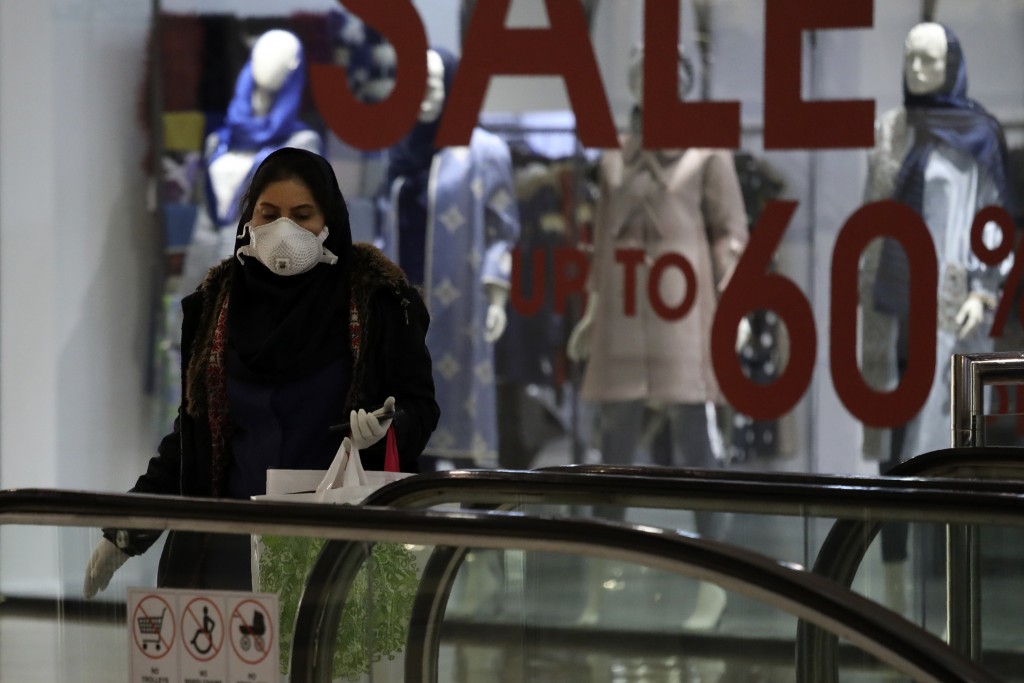 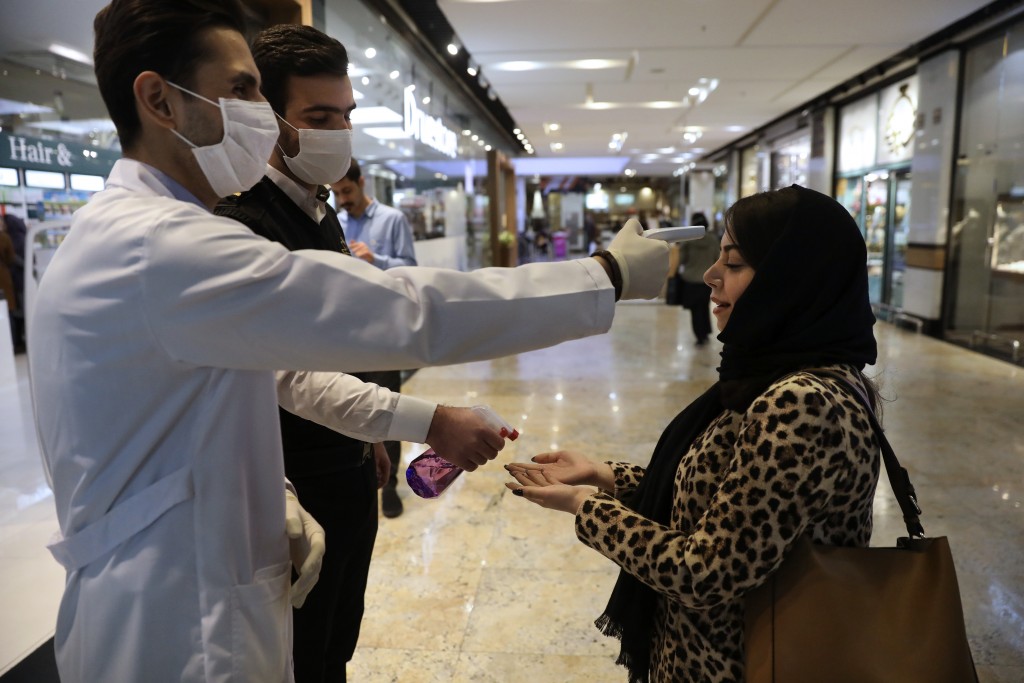 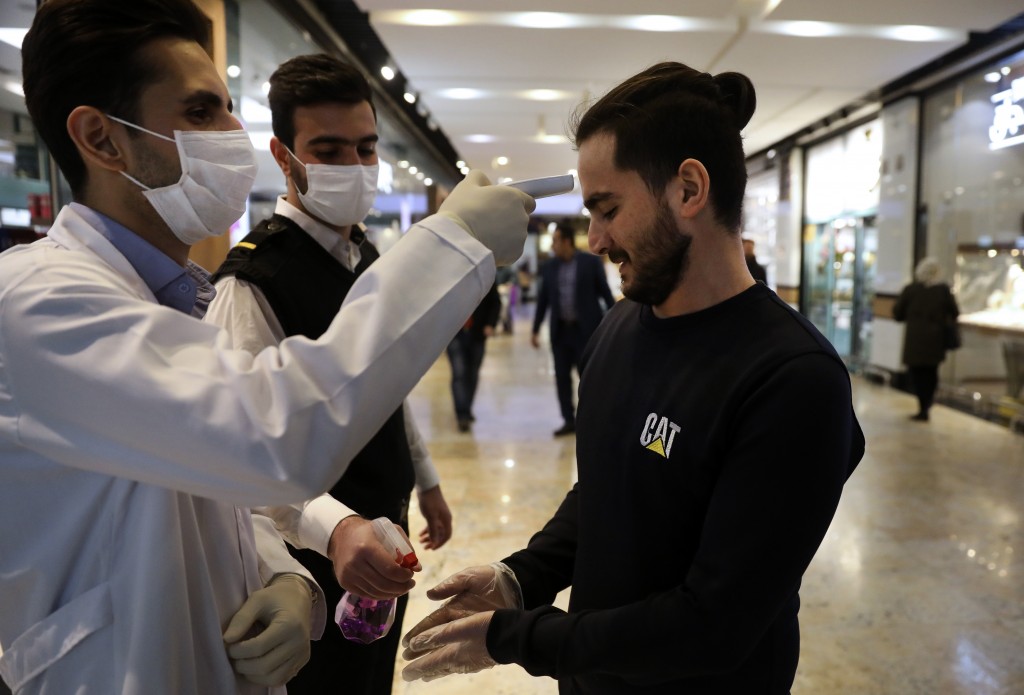 TEHRAN, Iran (AP) — Iran put its armed forces on alert Tuesday to assist health officials in battling the new coronavirus that's killed at least 77 people, an outbreak that has sickened top officials and pushed even its supreme leader into wearing disposable gloves while trying to reassure the nation.

Even as government officials sit meters (feet) away from each other at meetings now in an effort to stop its spread, the virus is ravaging both its civilian leadership and its Shiite theocracy. A top emergency official and at least 23 members of parliament reportedly contracted the virus and now suffer from the COVID-19 illness it causes. Others have died.

There are now over 2,540 cases of the new virus across the Mideast, with 2,336 in Iran alone. Of those outside Iran in the region, most link back to the Islamic Republic.

Experts worry Iran’s percentage of deaths to infections, now around 3.3%, is much higher than other countries, suggesting the number of infections in Iran may be far greater than current figures show. Meanwhile, a gloved Ayatollah Ali Khamenei sought to minimize the virus while praising the doctors and nurses combating the outbreak. He urged the nation to pray.

“This disaster, in our opinion, is not such a big disaster, there have been and there are bigger disasters than this," Khamenei said. “Of course I don't want to downplay the issue, but let's not exaggerate it much either. Something has happened, it will exist in the country for a time, which hopefully will be short, and then it will go away.”

As cases rise exponentially daily, it appears like the virus won't be going away soon.

Iran stands alone in how the virus has affected its government, even compared to hard-hit China, the epicenter of the outbreak. Worldwide, the virus has infected 90,000 people and caused 3,100 deaths.

The death of Expediency Council member Mohammad Mirmohammadi on Monday makes him the highest-ranking official within Iran’s leadership to be killed by the virus. State media referred to him as a confidant of Khamenei.

Those sick include Vice President Masoumeh Ebtekar, better known as “Sister Mary,” the English-speaking spokeswoman for the students who seized the U.S. Embassy in Tehran in 1979 and sparked the 444-day hostage crisis, state media reported. Also sick is Iraj Harirchi, the head of an Iranian government task force on the coronavirus who tried to downplay the virus before falling ill.

On Tuesday, lawmaker Abdolreza Mesri told Iranian state television’s Young Journalists Club program that 23 members of parliament had the coronavirus. He urged all lawmakers to avoid the public.

Members of Iran's Supreme Council of Economic Coordination, including President Hassan Rouhani, met Tuesday and sat meters (feet) apart from each other. State media did not comment on the move, nor the fact the meeting appeared attended by fewer officials than normal.

Iran’s state-run IRNA news agency also reported that Pirhossein Koulivand, head of the country's emergency services, had come down with the new virus. It said he was undergoing treatment.

In the last week, Iran offered temporary furloughs to over 54,000 prisoners, nearly a third of all prisoners held in the country, the judiciary’s Mizan news agency reported. That’s as activists have raised concerns over the possible spread of the new virus in Iran’s prisons.

Khamenei ordered Iran's armed forces to be ready to help health workers, but it wasn't immediately clear what the order entailed.

Officials previously said they had plans for 300,000 soldiers and members of the Basij, the all-volunteer force of Iran's Revolutionary Guard, to sanitize public areas, direct traffic and trace contacts that sick people had with others. The Guard also has been spraying down streets in major Iranian cities.

"Whatever helps public health and prevents the spread of the disease is good and what helps to spread it is sin,” Khamenei said at an annual tree-planting ceremony. He had never worn gloves at the ceremony in recent years.

However, life has slowed in Iran's capital, Tehran, where perfume seller Maedeh Jahangiri simply stood at her stand at an upscale mall with no one to offer samples.

“People are afraid to touch anything or take anything from us,” she said. “Everyone is at a loss.”

Meanwhile on Tuesday, the advocacy group NetBlocks said Wikipedia's Farsi-language website appeared to be disrupted in Iran for around 24 hours. NetBlocks described the disruption as being nationwide, saying its technical testing suggests the online encyclopedia is being blocked by the same mechanism used to block Twitter and Facebook. Those social media websites have been banned since Iran's disputed 2009 presidential election and Green Movement protests.

The disruption ended Tuesday afternoon, without authorities acknowledging it.

The Wikimedia Foundation, which oversees the volunteer-edited encyclopedia, saw the site was not accessible for 10 hours in Iran, spokeswoman Chantal De Soto said. She did not elaborate. NetBlocks previously reported internet disruptions affecting Iran in recent days and users across the Islamic Republic have reported problems.

The disruption raises fears of Iran potentially shutting off the internet entirely again, as it did for a week during economic protests in November. Iran separately has created its own so-called “halal” net of government-approved websites.

Meanwhile on Tuesday, the Middle East’s largest airline, Emirates, said it had to reduce or ground flights due to the new virus. Because of the slowdown, the government-owned carrier has asked its employees to take paid and even unpaid leave for up to a month at a time. Emirates operates out of Dubai, the world’s busiest for international travel.

“We have been tested before and Emirates will come out stronger,” Chief Operating Officer Adel Al-Redha said.

The world’s largest airline trade association, IATA, says Mideast carriers have already lost around $100 million in revenue due to a drop in ticket sales because of disruptions caused by the virus.