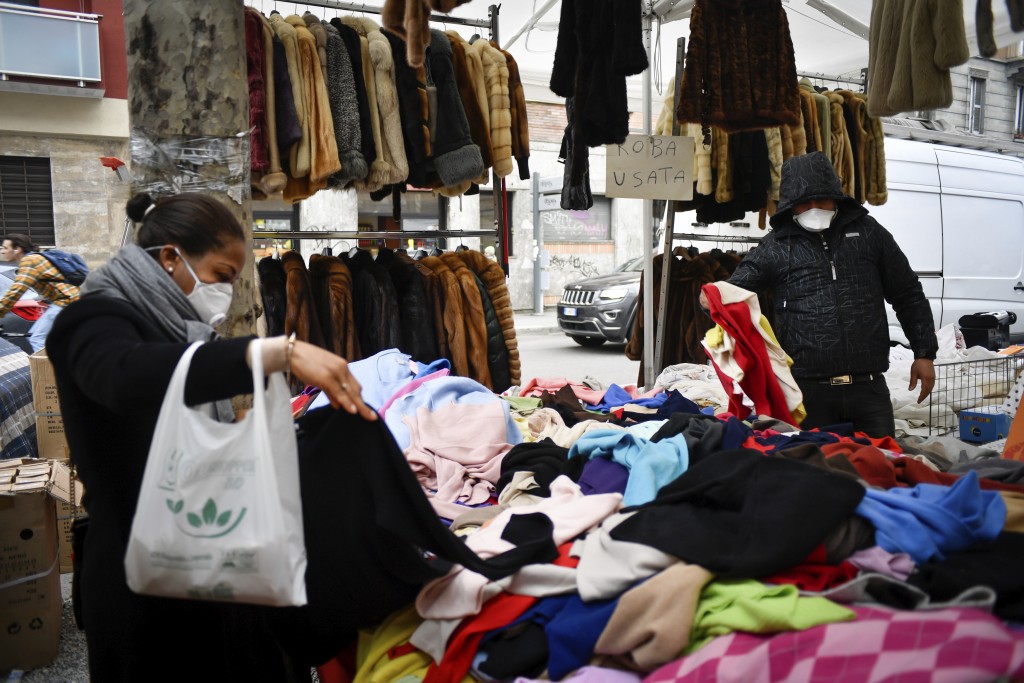 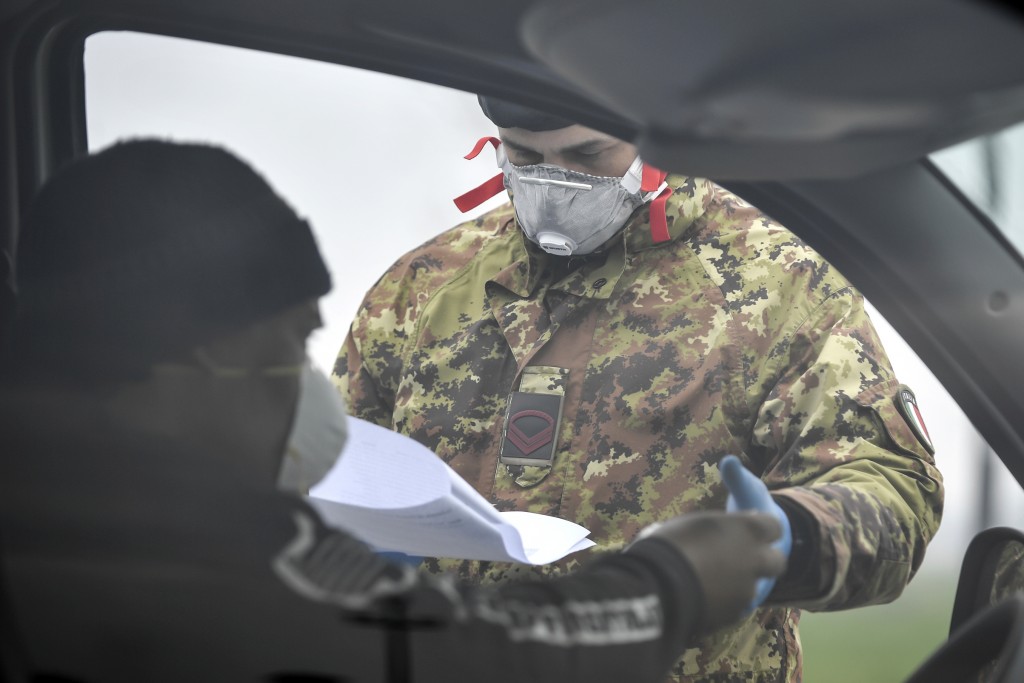 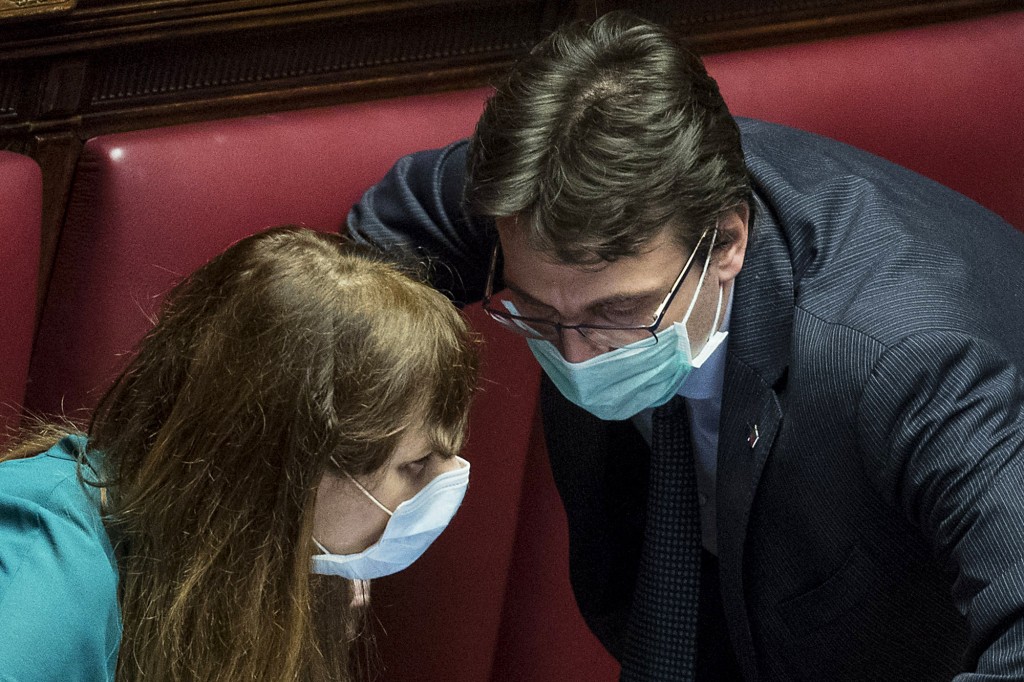 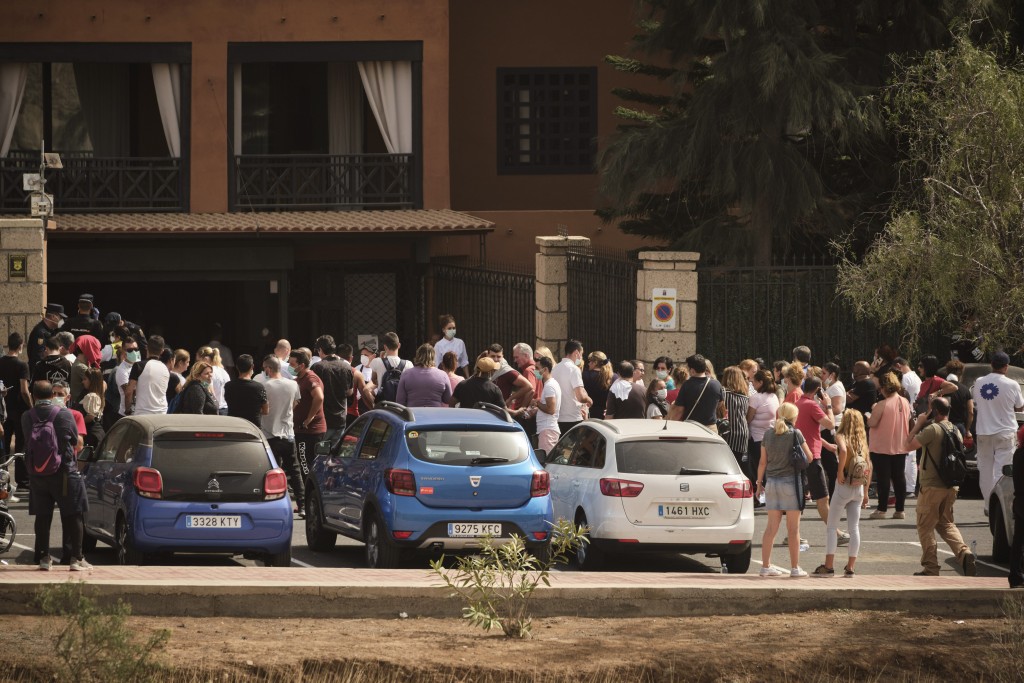 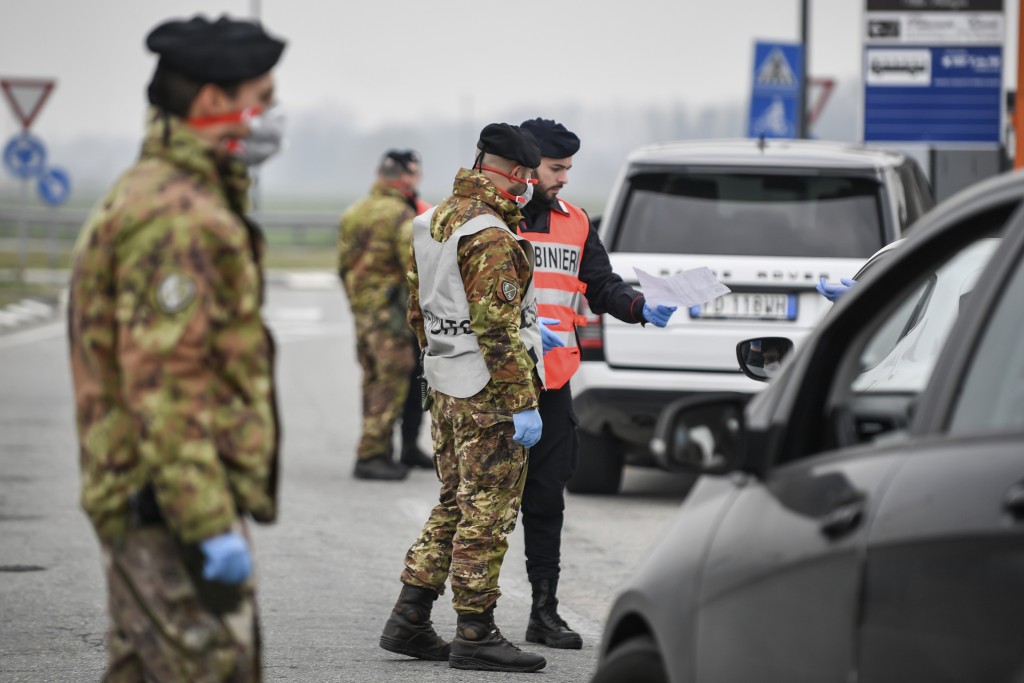 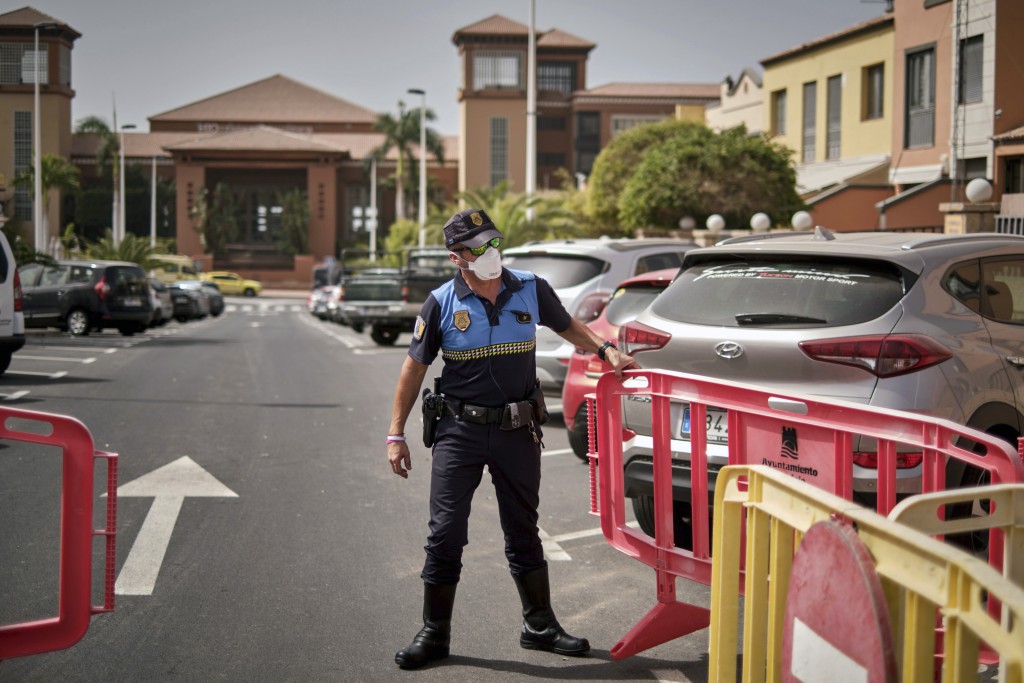 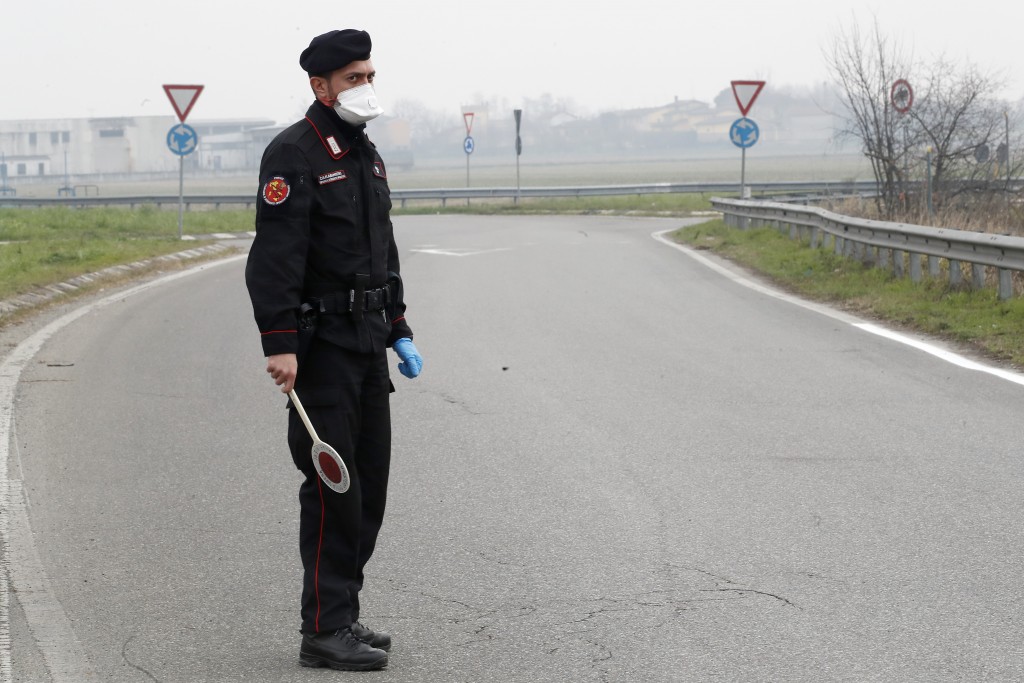 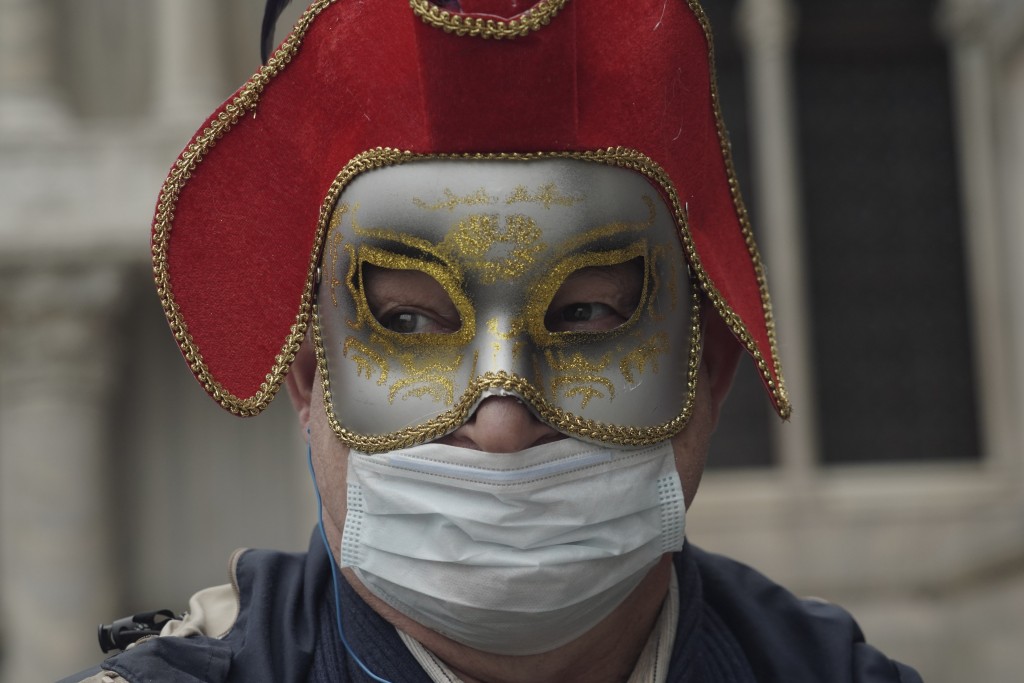 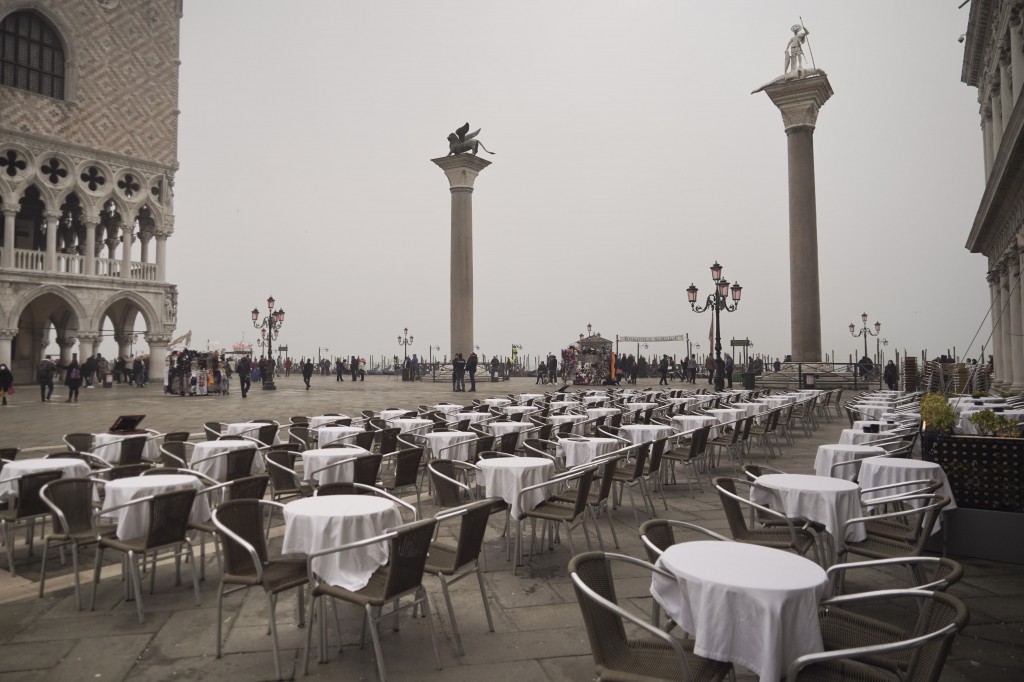 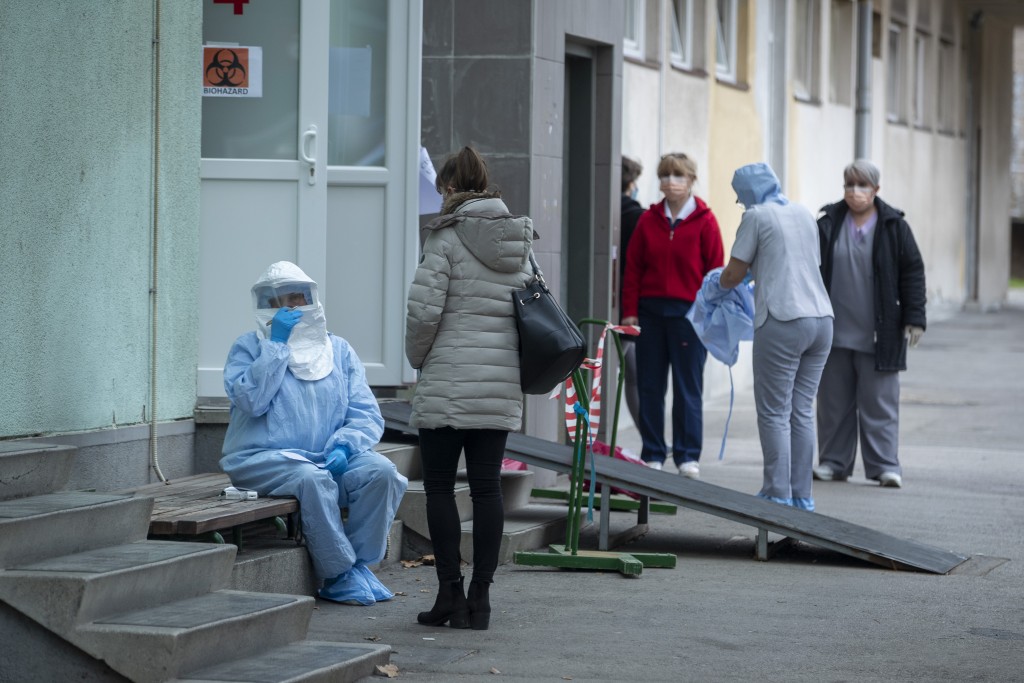 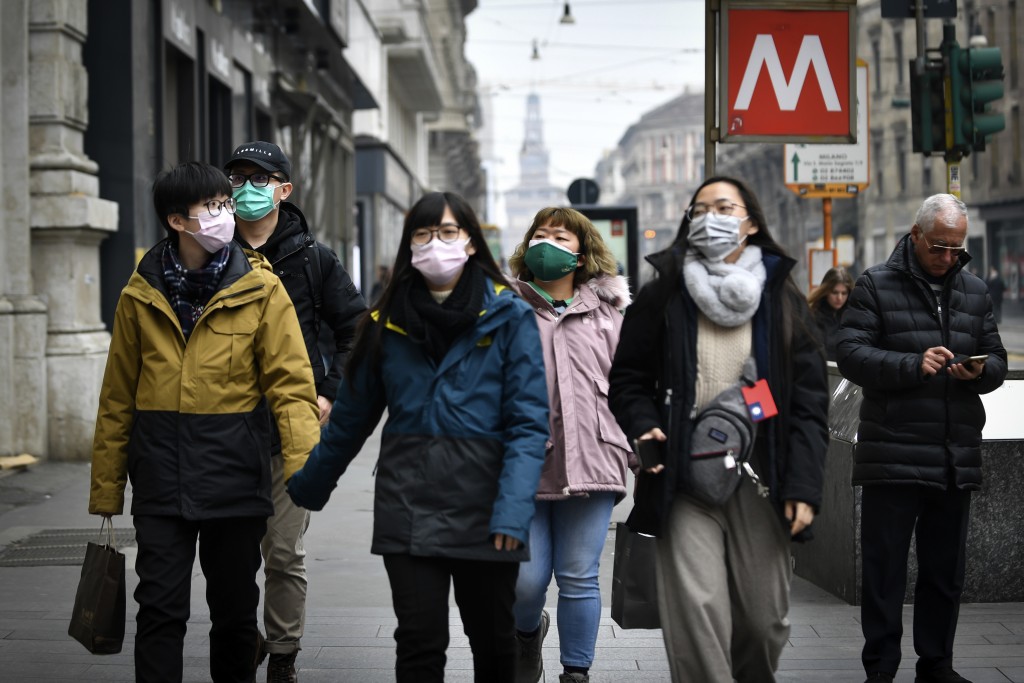 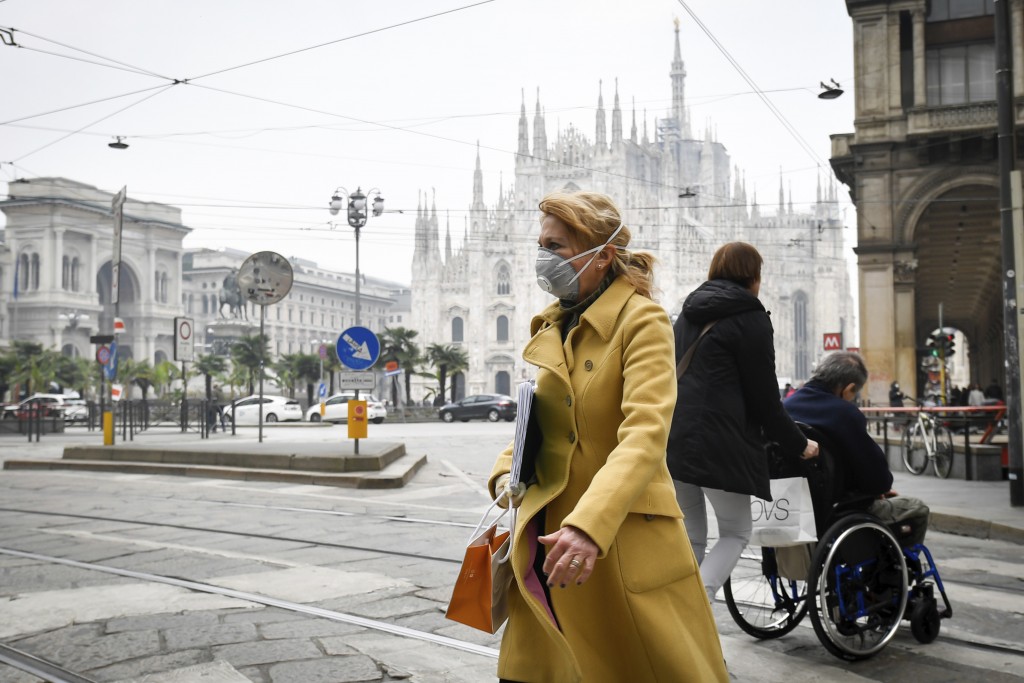 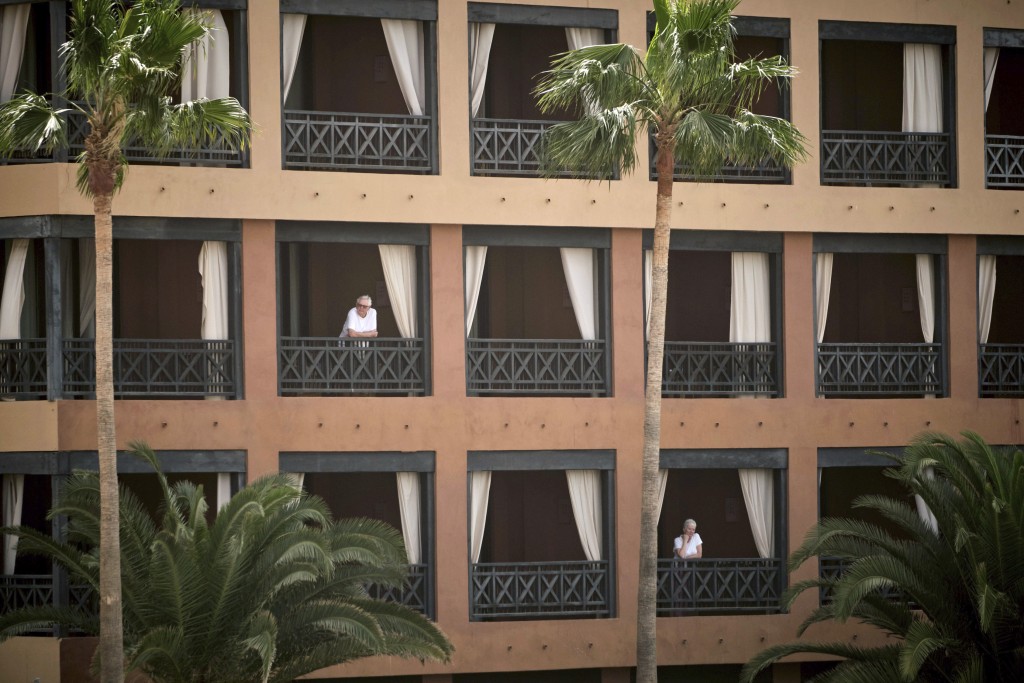 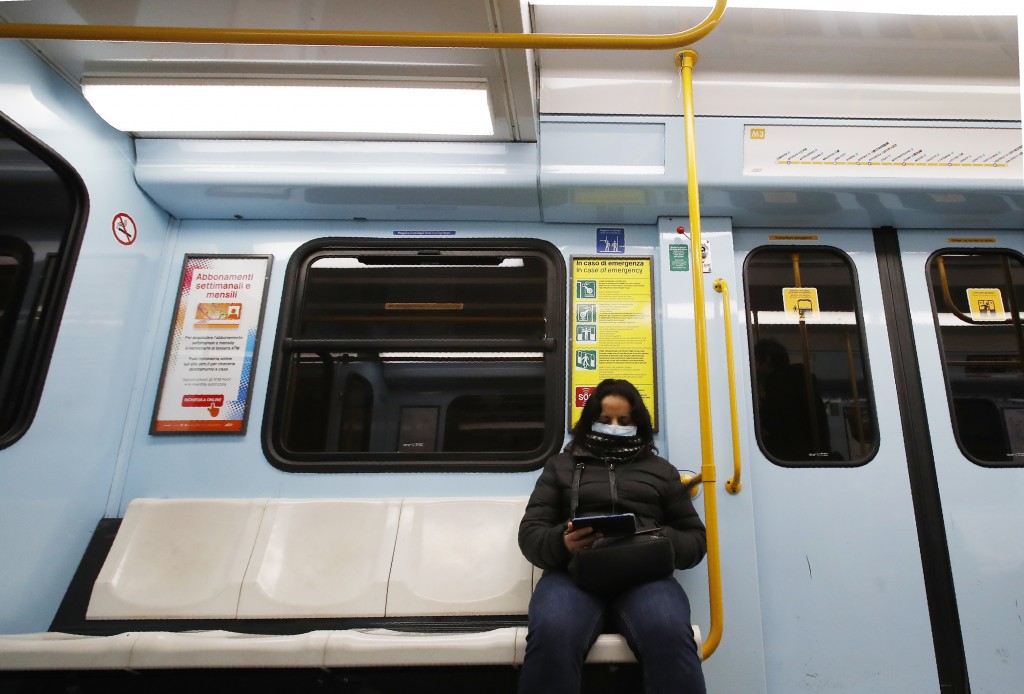 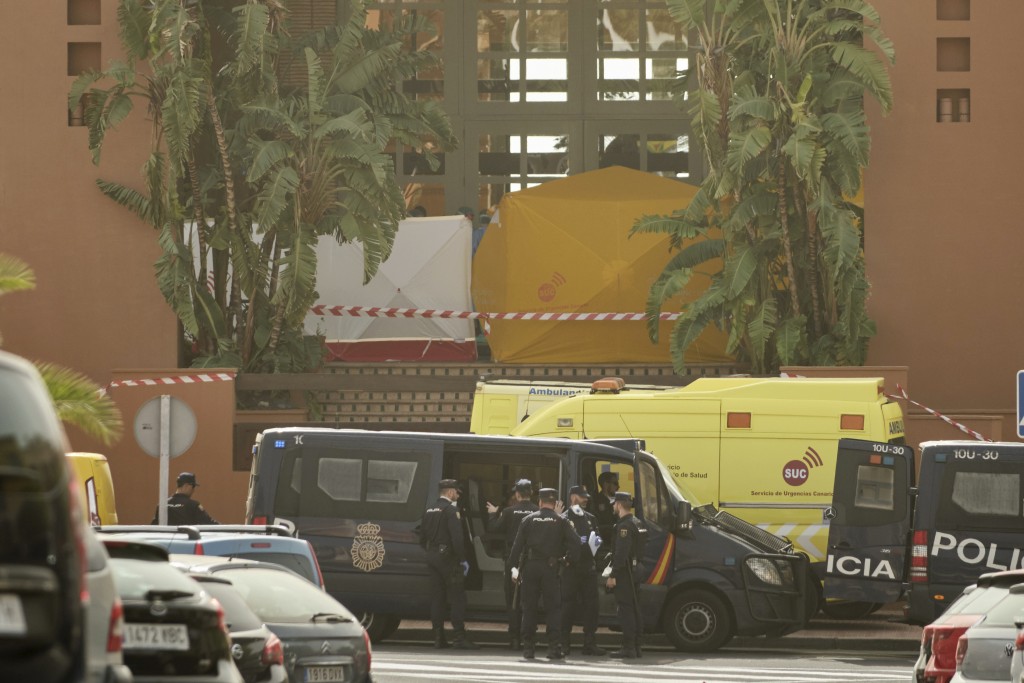 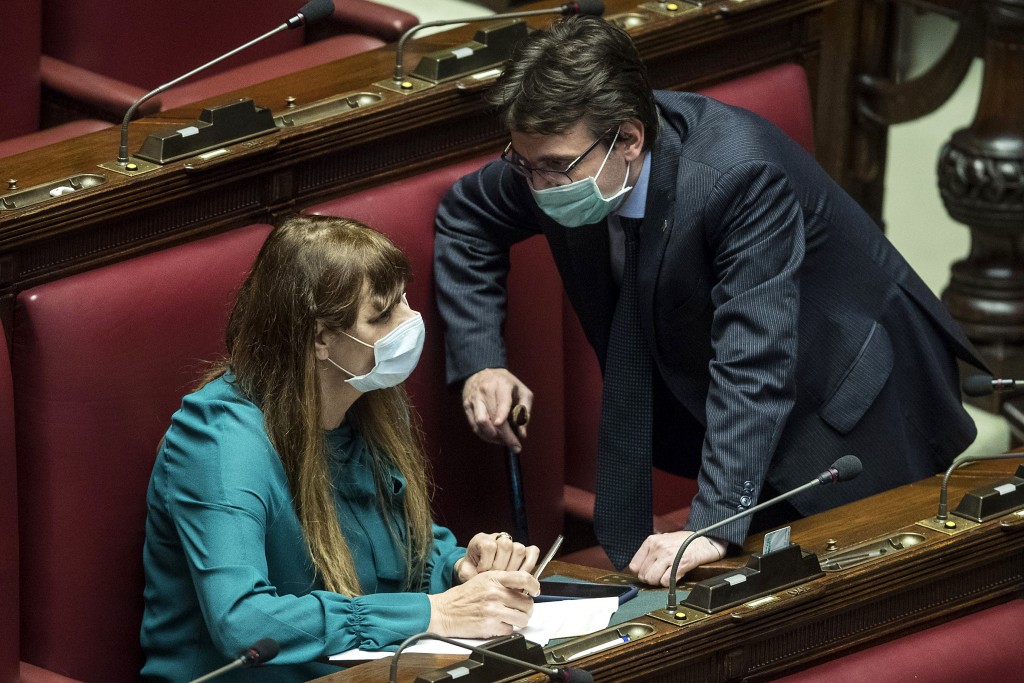 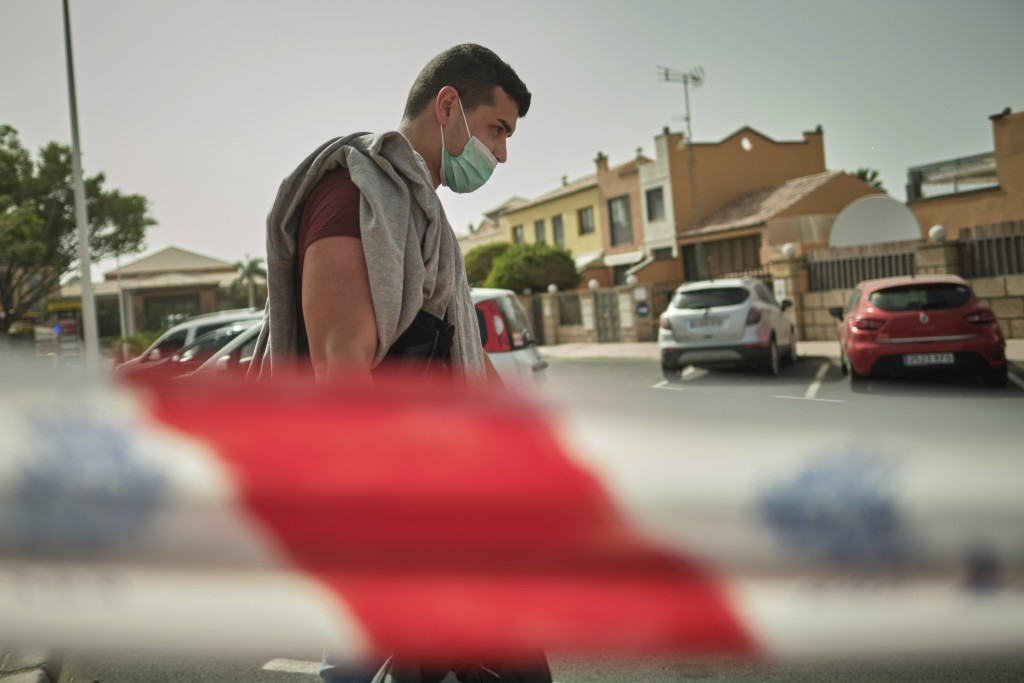 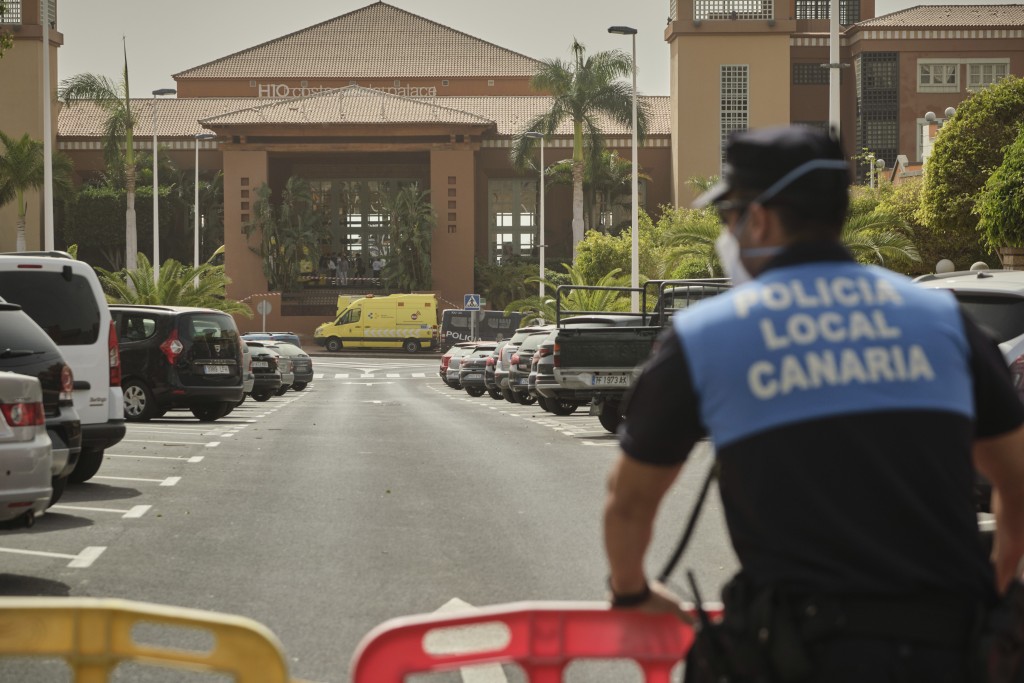 ROME (AP) — Italy reported a 45% one-day increase in people infected with the coronavirus as other countries in Europe recorded their first cases Tuesday, producing evidence that travelers are carrying the virus from the European outbreak's current epicenter.

Italian officials reported 11 deaths and 322 confirmed cases of the virus, 100 more than a day earlier. While the majority were concentrated in northern Italy, some of the new cases registered outside the country's two hard-hit regions, including three in Sicily, two in Tuscany and one in Liguria.

An Italian couple from the afflicted north tested positive in the Canary Islands off Africa, forcing the quarantine of their hotel in what one guest said felt like being “monkeys in a cage.” Austria, Croatia and Switzerland reported their first cases, all in people who recently traveled to Italy.

The four new deaths in Italy, like the seven reported earlier, were in patients who were elderly, suffering from other ailments or both, officials said.

Amid increasing cases and distribution problems with protective gear and test kits, Italian Premier Giuseppe Conte defended the measures Italy has taken to contain the outbreak and predicted a stabilizing of numbers soon. But he acknowledged that the rise in cases — the most outside Asia — was “worrisome."

“Obviously I can't say I'm not worried because I don't want anyone to think we're underestimating this emergency," he said before a meeting with a visiting World Health Organization mission. “But we trust that with the measures we've implemented there will be a containing effect in the coming days.”

Italy has closed schools, museums and theaters in the two regions where clusters have formed and troops are enforcing quarantines around 10 towns in Lombardy and the epicenter of the Veneto cluster, Vo'Euganeo.

The sponsors of one of the world's largest furniture and design trade shows, held in Milan, announced late Tuesday that they decided to postpone the international event s due to concerns over the virus. Milan is the Lombardy regional capital.

“In view of the ongoing public health emergency, the decision has been taken to postpone the upcoming edition of the Salone del Mobile.Milan to June 16th – 21st,” a statement from the organizers said. The show originally was scheduled for April 21-26.

Italian health officials haven't yet identified the source of the outbreak. Angelo Borrelli, the head of the Italian civil protection department, said the case count grew from 222 to 322, representing a 45% increase, in a 24-hour period from Monday evening to Tuesday evening.

The southern island of Sicily reported its first three positive cases from a woman vacationing from Bergamo, in Lombardy and two others travelling with her. Two cases were also reported in Tuscany, south out of the epicenter.

Spain counted three active cases: a woman in Barcelona who had been in Lombardy in recent days, and a doctor from northern Italy and his partner who were vacationing in Tenerife, in the Canary Islands.

The hotel where the couple was staying, the H10 Adeje Palace was locked down after they tested positive for the virus and 1,000 tourists prevented from leaving the hotel grounds, though they were allowed to circulate outside their rooms and use the hotel facilities.

“We feel a little bit like monkeys in a cage here as there are media representatives present near the hotel and police officers guarding the area are wearing masks,” Harriet Strandvik, the mother in a family of four at the hotel, told Finnish newspaper Ilta-Sanomat.

Hotel guests were informed of the quarantine via a flyer slipped under their doors late Monday: “Kind guests, we inform you that the hotel is closed for health reasons.''

Italians Paolo and Laura Martelli waited in their room Tuesday for a medical team to take their temperatures. “There’s a beautiful view of the sea which we are watching right now. We don’t feel like recluses,’’ Martelli, 89, told The Associated Press by telephone.

The Canary Islands, an archipelago located around 100 kilometers (60 miles) west of the African coast, is a popular vacation destination that attracts Europeans year-round. Many Italians are vacationing this week as schools have a mid-winter break.

Conte shocked Lombardy officials by taking to task the hospital in Codogno, southeast of Milan, where Italy’s first positive patient went on Feb. 18 with flu-like symptoms. The man was sent home, only to return a short time later with worsening conditions, at which point he was tested for the virus.

Many of Lombardy’s 200-plus positive tests have a traceable connection to the Codogno hospital, including several doctors and nurses, patients and relatives who visited them.

Conte told reporters that the Lombardy cluster grew “because of the hospital management that wasn’t completely proper according to the protocols that are recommended for these cases."

“This surely contributed to the spread,” he said.

“It's offensive. It's unacceptable," Gallera said, noting that the man presented none of the main risk factors for the virus — travel to China or contact with an infected person — when he first went to the emergency room.

The man was eventually tested after doctors ascertained from his wife that he had met with someone who had recently returned from China. But officials have excluded that contact as the source of the outbreak since that person tested negative.

As officials worked to get ahead of the spread nationally, the reality of a two-week quarantine was setting in for residents of Italy's isolated “red zones" — the cluster of 10 towns in Lombardy and Veneto's tiny Vo'Euganeo.

“The concern is palpable, people are worried, partly because of what they hear on television, information, on social media," said Davide Passerini, the mayor of Fombio, one of the Lombardy towns under lockdown. “Life is like it is in other isolated villages: Everything is shut, people go out just to do their shopping.”

And they wait to see if they develop symptoms.

Italy initially tested anyone who came into contact with an infected person. But with the numbers growing and supply issues with test kits, masks and protective gear, Italy's national health system revised its containment strategies.

People who live or have visited the quarantined areas, or who who have been in contact with positive cases, are advised to self-quarantine for two weeks. They are instructed to take their temperatures twice a day, and stay in touch with their doctors or the national health service via an overwhelmed toll-free number.

Only if they develop symptoms are they tested, most often by a team performing house calls to prevent hospitals and clinics being overly stressed, said Elia Delmiglio, mayor of Casalpusterlengo, another of the 10 towns in Lombardy's “red zone."

“Local health structures are doing their best, but in some cases they were not ready to face such an emergency,” Delmiglio said.

The town — with more than 15,000 inhabitants — doesn’t have a working emergency room, only a hospital mainly specializing in cancer patients, who are particularly at risk for contracting the virus.

In another hotbed of the virus outbreak -- Veneto’s tiny town of Vo'Euganeo, which has most of Veneto's 43 cases — local authorities were still planning to test all 3,300 residents and 600 acting hospital staff.

“I’m being optimistic and I feel well," said resident Andrea Casalis, as he waited to be tested. “People continue to go out here and talk in the streets, but we try to keep some security distance.”

Aritz Parra in Madrid, Giada Zampano and Frances D'Emilo in Rome and Jovana Gec in Belgrade, Serbia, contributed to this report.